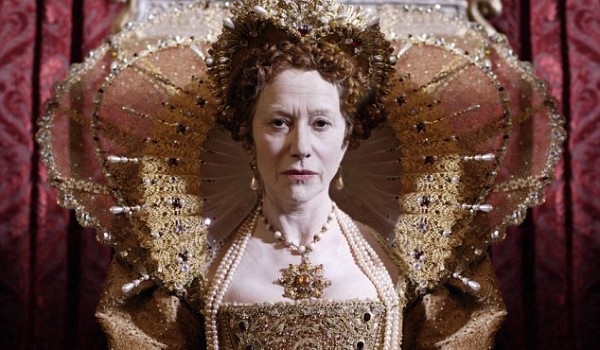 It seems to be practically de rigeur to include a wired veil and a huge standing ruff in any of Queen Elizabeth I’s movie costumes.

Ruffs are a relatively common Elizabethan accessory — starting with a small pleated frill in the first half of the 16th century, and ending the century huge and dramatic. Late in the 16th century, a wired veil was sometimes added for even more drama — a floating, wire-supporting, standing, unpleated, frequently-heart-shaped, collar-y thing that stands up from the wearer’s shoulders and are often worn under a ruff. They were popular in the very late 16th century and early 17th century, at least in England.

Almost every screen Bess has a huge ruff and wired veil. Notable exceptions being Cate Blanchett the first time around in Elizabeth and Queenie from Blackadder. Queen Elizabeth I’s movie costumes are noted for their bling, and the wired veil IS a really cool item. It totally does its job of making Good Queen Bess look regal and goddess-like!

Most costume designers seem to be drawing on these two portraits of Queen Elizabeth I: The Hardwick Hall portrait of Elizabeth I, 1592. The “Ditchley Portrait” of Queen Elizabeth I by Gheeraerts, c. 1592

In order to answer one of the more vexing questions of our age, we ask you:

Which Queen Elizabeth I wore her wired veil and huge ruff best?

THE OUTCOME IS IN YOUR HANDS, PEOPLE!

SORRY, THIS POLL IS NOW CLOSED. Bette Davis in The Private Lives of Elizabeth & Essex (1937) Judi Dench a third time in Shakespeare in Love (2007) Helen Mirren again in Elizabeth I (2005) Angela Pleasance in Doctor Who: The Shakespeare Code (2007)