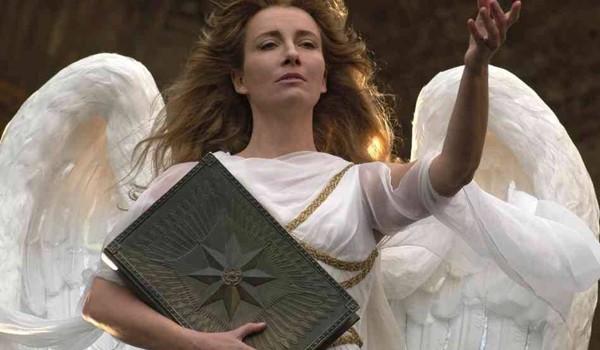 Emma Thompson has been one of my top crushes since day one — that would be when I saw her playing the reluctant yet forthright Princess Katherine de Valois opposite her then-husband Kenneth Branagh as Henry V in 1989. In fact, it was their movie collaborations — like the historical costume movies, Henry V, Dead Again (1991), and Much Ado About Nothing (1993) — that made me fall hard for Thompson (OK, and Branagh too, and I was annoyed at him for cheating on Emma with Helena Bonham Carter; perhaps Wild Wild West (1999) and still not winning an Oscar are his penance).

There’s so many things to admire and adore about Emma Thompson, as an actor, artist, and woman. She chooses a wide variety of roles and fully inhabits each one, from light comedy to deep tragedy and everything in between. She’s incredibly subtle but can play broad if needed. She changes her voice and body language adeptly to convey a character.

She’s known for playing the classic ‘reserved Englishwoman in period films’ and won the Best Actress Oscar for such a role in Howards End (1992), but that’s not the end of her talents. Emma Thompson is a writer, and she wrote the screenplay for Sense and Sensibility (1995) — which I can safely say is one of the most popular Jane Austen film adaptions around, not just for the costumes, but for the excellent script, which won Thompson the Best Adapted Screenplay Oscar. She is, so far, the only person, much the less the only woman, to earn both an acting and screenwriting Oscar. Thompson also wrote the screenplay for Effie Gray (2014), although the film had a hard time getting into theaters in the U.K. due to copyright issues and never got a wide release in the U.S.

Finally, she’s just an interesting woman. Thompson is vocal about being an atheist, she’s worked for environmental causes, and she supports Palestinian refugees. Her activism isn’t mere talk either. She and her second husband (actor Greg Wise, who played John Willoughby in Sense and Sensibility) adopted a Rwandan orphan and former child solider so the teen could have a better life in the U.K. (and he grew up to become a human rights lawyer). That’s using your celebrity for good.

So huzzah for Emma Thompson! Funny, smart, committed to her causes, and easy on the eyes too. She’s the whole package. I don’t know if I want to do her or be her, either would be an honor. 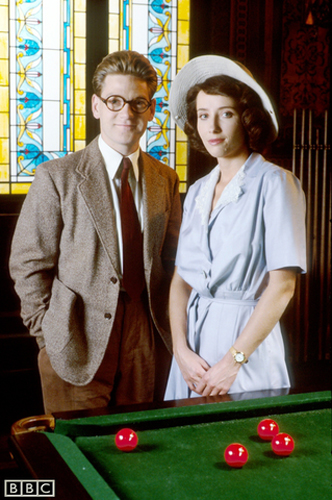 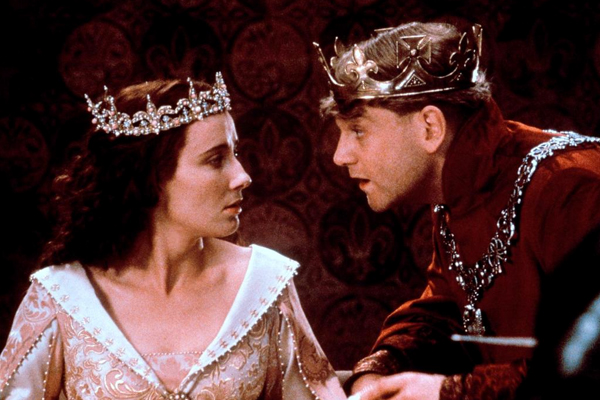 From 1991’s Impromptu, one of Thompson’s most hilarious historical roles as Duchess D’Antan hosting a bunch of parasitic 1830s artists. Her reactions in this scene are priceless: 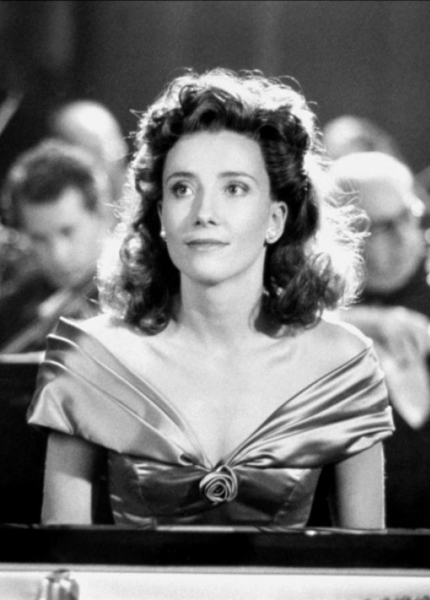 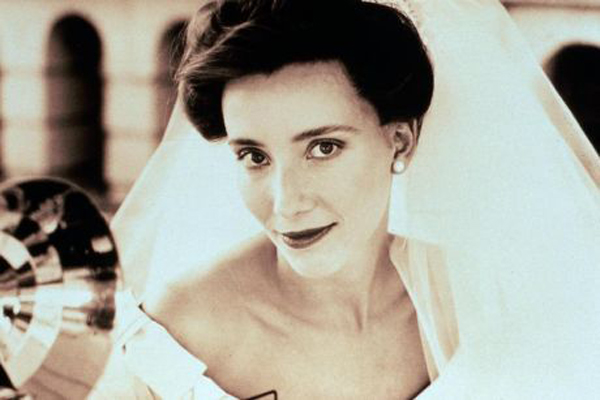 More Dead Again, too hard to pick just one. 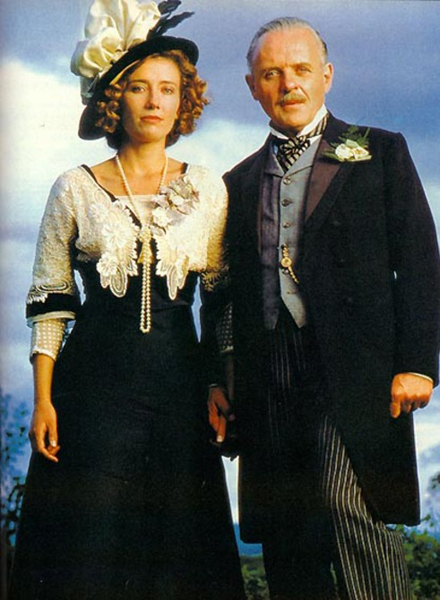 With Anthony Hopkins from her Oscar-winning role as Margaret Schlegel in Howards End (1992). 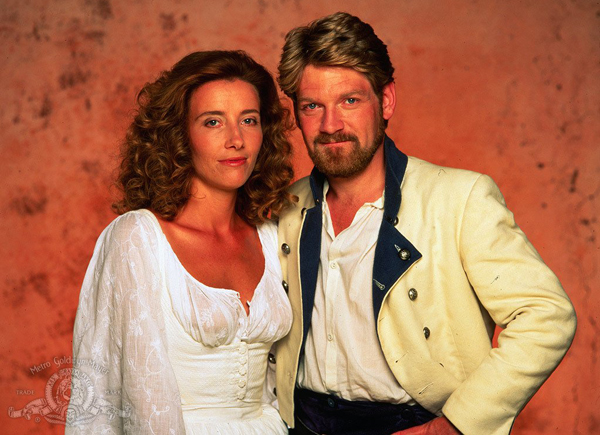 Emma & Ken’s last glowy romantic pairing as in Much Ado About Nothing (1993), though I’ve never figured out what period this is supposed to be set in. It’s randomly pretty! 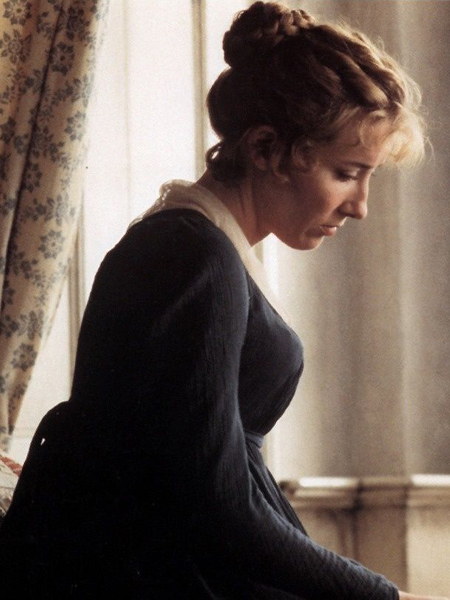 Her Oscar-winning screenplay for Sense and Sensibility (1995) perhaps overshadowed her role. 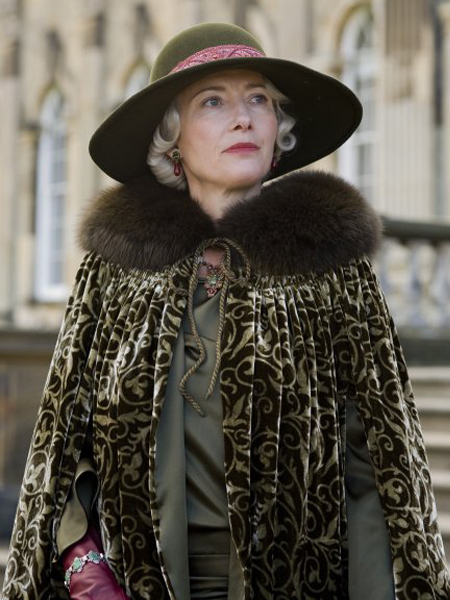 The only good thing about the 2008 Brideshead Revisited reboot was Emma as Lady Marchmain.

In Saving Mr. Banks (2013), Thompson takes a short trip back to the 1960s, but plays the terribly complicated character of P.L. Travers, writer of the Mary Poppins books: 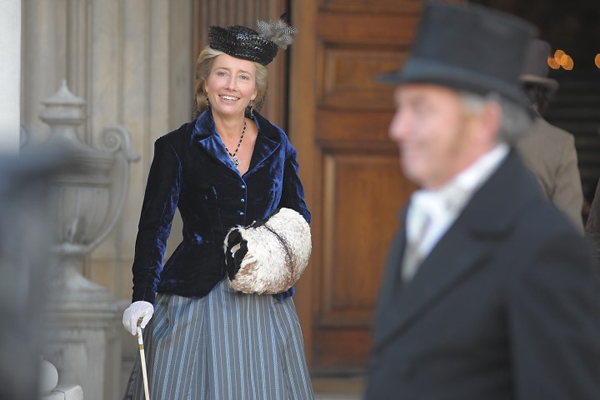 And her most recent historical costume film is Effie Gray (2014), which Emma Thompson wrote the script for and plays Lady Eastlake.

This is just the tip of the iceberg that is her work in film and  TV, historical and otherwise. What’s your favorite Emma Thompson movie?