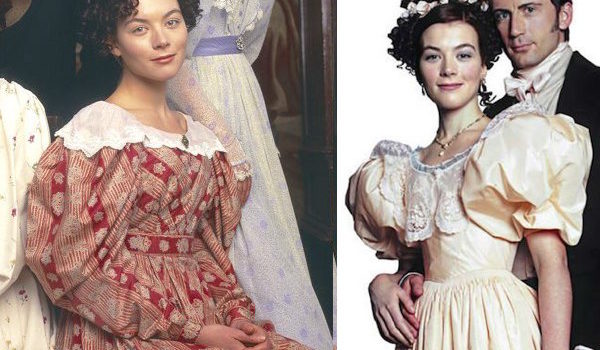 Today we’re going to start our in-depth analysis of the costumes in Wives and Daughters. The book (originally a serial) by Elizabeth Gaskell was published from 1864-66, but it’s set in the early 1830s. I’m not going to detail every costume worn in the series — if you’re interested, The Dashwood Sisters blog has screencapped every outfit worn by all the main characters in the show — but I do want to talk about how the leads are costumed and how their wardrobes change.

Molly is the daughter of a country doctor. She’s middle class, but she lives in a small village in rural England. She’s grown up without a mother, so she lacks a parent who would be hands-on in the wardrobe department — but she also has to play the part of the mistress of the house sometimes, at least early on. She’s a young woman (late teens I think?) who begins as sweet, kind, and dependable but also sheltered and daddy’s girl. She’s also intelligent and a bit shy. Over time, she hangs on to that kindness but becomes more outgoing (through her friendship with step-sister Cynthia) and learns she has a strong resolve. And, she falls in LURVE.

First, let’s look at fashion from the early 1820s through the early 1830s, because it’s important when considering Molly’s style: Early on, Molly wears a lot of girlish dresses. They hit all the notes for late 1820s, so they are a little bit dated, but I also think that stylistic choice is there to make her look young. The fabrics are very practical, and her hair tends to be simply styled (although the fact that it’s very curly softens her a bit):

The cotton print and short sleeve make this very practical, and the high waistline makes it more late 1820s than early 1830s. Note the lack of accessories like a pelerine or gloves.
Via The Dashwood Sisters. She wears a LOT of solids. Again, there’s a raised waistline (lower in back) which is a bit dated compared to styles worn by other characters. Notice how the sleeve is pretty narrow — there’s nothing OTT about Molly.
Via The Dashwood Sisters. However, as Molly becomes influenced by Cynthia’s outgoing nature, plus has a new step-mother to fuss over her, AND takes on the role of emotional support for the Hamley family, her wardrobe starts to change. Her waistlines lower and sleeves get bigger — all more fashionable touches for the early 1830s. And, she starts wearing pelerines and other accessories, clearly something her step-mother Hyacinth (who is always dressed to the nines) pushes on her. This print dress has fashionable gigot (or leg-of-mutton) sleeves — wide on top, narrow on the forearm. The waist is much lower, and the bodice itself fits much more closely. Compare Molly’s print dress to this original — it has the same natural waistline and very full sleeves above the elbow.
Dress, 1832-35, Metropolitan Museum of Art.

However, she remains practical whenever she can, as evidenced by her love of jumpers (i.e., a sleeveless dress over a blouse)… which is the one style I question. Has ANYONE seen anything like this in the period? I can’t say I haven’t but then I can’t say I have… Here’s a blog post showing the existence of such sleeveless overgowns in the Regency era (1800s-10s), but that’s a lot earlier. Again, however, the waistline is lower and the bodice is much more fitted. This is a more grown-up look compared to the first two dresses.

This next dress typifies how Molly’s style has changed by the end of the series. She’s wearing a more complex fabric — stripes and florals! — in a stronger color. Plus, she’s keeping the fashionable wide sleeve, lower waistline, and and added a lacy collar. Molly is all growed up in this red print dress. There was a big emphasis on the width of the shoulders in this era, and wide lacy collars (as well as wide pelerines) were used to emphasize this.
Petit Courrier des Dames, 1830.

Now let’s look at evening styles, which show a similar change over time: Molly’s evening wear shows a similar transition. Her first evening dress is a particular plot point. Molly goes to stay with the local squire’s family (the Hamleys), so she buys a dinner dress from the local shop in town. She thinks it’s very fashionable, but the Hamleys clearly think the tartan is a bit much (although they’re polite about it) and inquire if she’s wearing it because her father is Scottish. It is a plot point that comes directly from the novel: the local dressmaker “Miss Rose persuaded her [Molly] to order a gay-coloured flimsy plaid silk, which she assured her was quite the latest fashion in London, and which Molly thought would please her father’s Scotch blood. But when he saw the scrap which she had brought home as a pattern, he cried out that the plaid belonged to no clan in existence, and that Molly ought to have known this by instinct. It was too late to change it, however…” Later on, Mrs. Hamley thinks of the dress as the “horrid plaid silk.” The dress itself isn’t really bad, but the other characters’ reactions show that they think it is! The two-puffed upper sleeve and high waistline are both VERY late 1820s — again, making the cut at least very old-fashioned.
Via The Dashwood Sisters

While the dress works fine in the series — the colors are louder than anything else seen on screen, and I don’t believe there’s anyone else in plaid — loud plaid dresses were fashionable in the period, so I always have to suspend disbelief. However, looking stylistically at the cut, it’s waaaay more early- to mid-1820s than early 1830s: Here’s an example of a double-puffed sleeve.
Costume Parisien, 1821.

Mid-way through the series, Molly and family attend a charity ball. This is the first evening event step-mother Hyacinth gets to oversee. Molly wears a very pretty white cotton dress with embroidered pieces on the sleeves. Interestingly, the narrow sleeve and high-ish waistline make it simpler and less fashionable than the dresses worn by Hyacinth and step-sister Cynthia, although it’s much improved in terms of taste.

The skirt is also fuller than an 1820s gown would be. At the end of the series, Molly shows she’s a sophisticated, adult woman by wearing this cream taffeta gown to a party at The Towers, the home of the local aristocracy. It’s ULTRA fashionable with its natural (pointed!) waistline and very full sleeves — plus the taffeta fabric and wide lace at the neckline make it much fancier than anything Molly has worn previously. And, for the first time she wears an over-the-top 1830s apollo knot hairstyle like those worn by Hyacinth and Cynthia: Okay, so Molly’s gown could use more petticoats, but otherwise compare it to the huge sleeves, wide lace collar, and natural waistline of this evening dress.
Petit Courrier des Dames, c. 1831.

What’s your favorite look worn by Molly in Wives and Daughters?