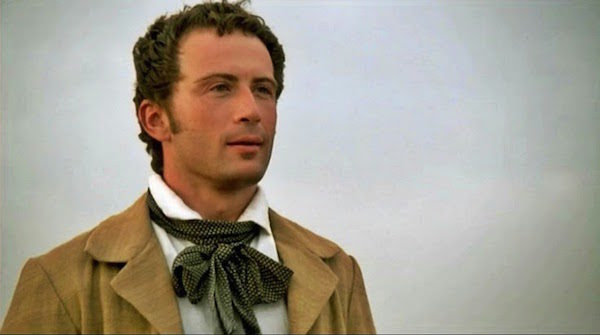 Every time we have posted something related to Wives & Daughters on this here blog or over on Facebook/Twitter, many of you get excited … and it’s no wonder, because while knowledge of this BBC miniseries has faded, it’s a classic, and it needs to be resurfaced. The 1999 adaptation of the novel by Elizabeth Gaskell (who also wrote North & South) is nearly perfect: interesting characters, a story that takes its time and doesn’t always go where you think it will, and faaaaaabulous 1830s costumes. Today we’re kicking off a whole WEEK of celebration of Wives & Daughters, so join us for the ride as we look at all the hot boys, why this series rocks, and then the wardrobes of our main characters!

I really should start by just talking about the series in general, but it’s Monday and you know what that means: MAN CANDY. So, I’m doing things slightly out of order by celebrating all the male hotties of Wives & Daughters today. Then tomorrow, we’ll get to the series in general. So if you’re not familiar with W&D, sit tight, appreciate the Man Candy, and tune in tomorrow for a better introduction.

There are a number of great male characters in Wives & Daughters: Michael Gambon (second from right — The King’s Speech, Emma, Brideshead Revisited, Cranford, Gosford Park, Sleepy Hollow, Plunkett & Macleane) as Squire Hamley, crusty and old-fashioned but with a sweet heart underneath it all. But really, there are two guys we need to focus on, and their characters are almost polar opposites:

I’ve raved about him before, but let’s expand: Iain Glen (who you know from Game of Thrones as well as Downton Abbey and Borgia) plays hottie/baddie Mr. Preston. He’s not quite a date rapist, but if he knew about roofies he’d be totally down. He’s one of those confused guys who doesn’t understand about the male gaze and the patriarchy — i.e., he IS the male gaze, but he doesn’t get it and doesn’t see why it’s a problem. He thinks he’s in love with then-very-young Cynthia, but instead of considering how inappropriate that might be, he strong-arms her into a very uncomfortable position. It’s actually kind of sad watching him try to figure out where he’s going wrong and applying all the wrong techniques to try to fix his situation, but at the same time you just want him to go AWAY.

Except, he’s hot. And bad. And I get all conflicted! Because he’s Not a Good Guy. But he’s all pretty and looks great in a top hat. Smizes when things are going his way… Tries to be the gentleman… Doesn’t get where he’s going wrong… Is all tousled and pretty! Then you’ve got the Ultimate Cutie, even if he is kind of confused about his priorities, Roger Hamley. Played by Anthony Howell (Mr. Selfridge, The Other Boleyn Girl), and this was his first screen credit! Roger. Roger, Roger, Roger. He’s handsome. He’s sweet. He’s the overlooked younger son. He’s smart as a whip and into SCIENCE and exploration and stuff. Okay, so he’s distracted by a pretty face! No boy can be perfect, right? RIGHT? (Molly isn’t listening, is she?) Adventurous and gets his kit off! AND THIS IS THE SMILE HE GIVES YOU WHEN YOU SAY YES. I MEAN, COME ON!!!!