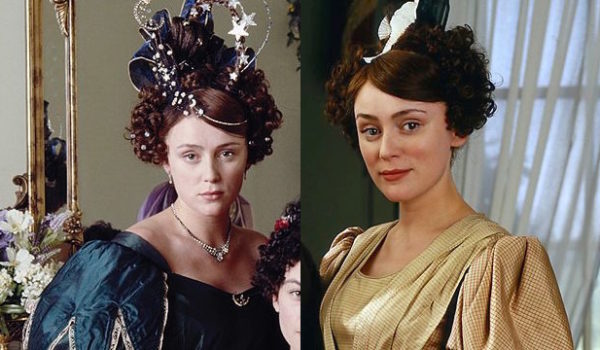 Every time we have posted something related to Wives & Daughters on this here blog or over on Facebook/Twitter, many of you get excited… and it’s no wonder, because while knowledge of this BBC miniseries has faded, it’s a classic and it needs to be resurfaced. The 1999 adaptation of the Elizabeth Gaskell (who also wrote North & South) novel is nearly perfect: interesting characters, a windy story that doesn’t always go where you think it will, and faaaaaabulous 1830s costumes. Now we’ve got a whole WEEK of celebration of Wives & Daughters, so join us for the ride as we look at all the hot boys, why this series rocks, and then the wardrobes of our main characters!

Today we’re continuing our in-depth analysis of the costumes in Wives and Daughters. The book (originally a serial) by Elizabeth Gaskell was published from 1864-66, but it’s set in the early 1830s. I’m not going to detail every costume worn in the series — if you’re interested, The Dashwood Sisters blog has screencapped every outfit worn by all the main characters in the show — but I do want to talk about how the leads are costumed and how their wardrobes change.

Cynthia is Hyacinth’s daughter. She’s been at school in France for a number of years as Hyacinth has been having to support them by governess-ing. But once Hyacinth marries Dr. Gibson, she moves to England to live with her mother, new step-father, and new step-sister, Molly. Cynthia and Molly hit it off immediately, although there are some bumps to their relationship that need ironing out.

Cynthia is (comparatively, in this small English village) glamorous. She’s fun, flirty, and coquettish. She has a kind heart and she’s not dumb, but she’s not bookish like Molly… and she definitely wants the finer things in life. She’s dressed to suit: while her gowns aren’t always of the finest fabrics, the cut and styling is very fashionable for the early 1830s — and her hair is always dressed to the NINES. 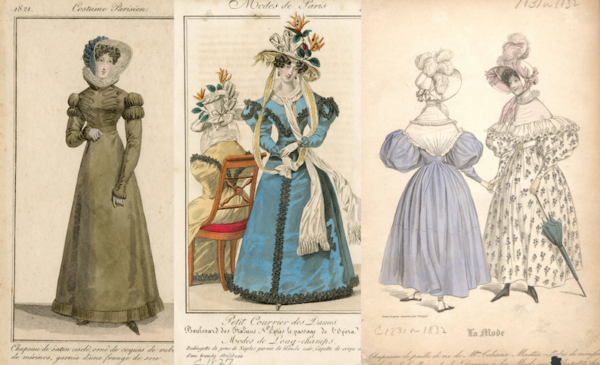 As you read in yesterday’s post about Molly, Wives & Daughters moves between late 1820s and early 1830s fashions — and, therefore, is set in the early 1830s as far as real fashion history is concerned. But hat tip to reader Susan, who pointed out on our series overview post that there are references near the end of the miniseries to the “young queen,” therefore Queen Victoria, who was crowned in 1837 — making the series timeline mid- to late-1830s! I checked the original Gaskell novel, and don’t see any such references, but I wanted to talk briefly about why the costumes are certainly not 1835-7ish. 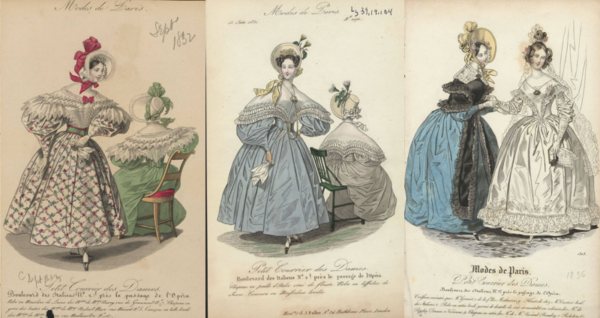 While you could argue that the styles worn in W&D could go as late as 1832 (far left), note how the sleeves start to droop at the head of the sleeve AND the fullness moves to incorporate the lower arm (center) by 1834. Even more tellingly, by 1836 the sleeve fullness collapses into some small fullness just above the elbow, with the upper and lower arm relatively fitted. We don’t see anything like these 1836+ sleeve styles in Wives & Daughters.
Petit Courrier des Dames, 1832 | Petit Courrier des Dames, 1834 | Modes de Paris, 1836

When Cynthia first arrives, her dress fabric isn’t anything terribly exciting — but she has the fashionable natural waistline and full-above-the-elbow sleeves that Molly is missing. And, from the get-go, her hair is in an elaborate Apollo’s knot arrangement, with short curls at the upper sides of the face and a sticky-uppy arrangement at the crown of the head: 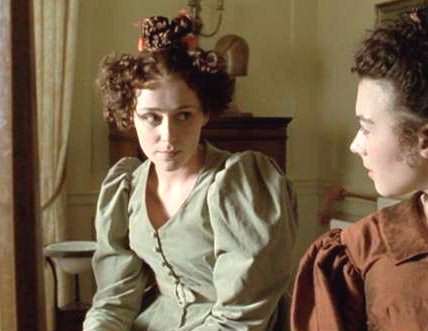 Not sparkly, sure, but up-to-date.
Via The Dashwood Sisters. 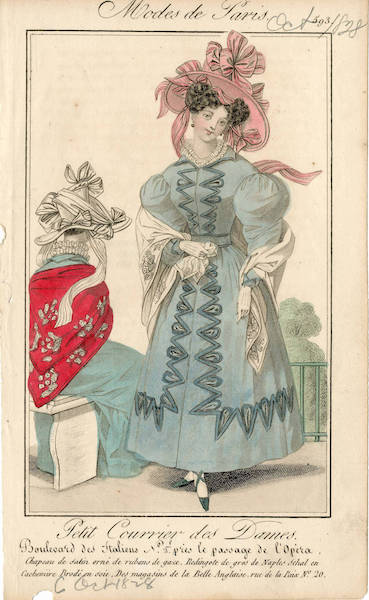 Probably the earliest you see this silhouette is 1828.
Petit Courrier des Dames, 1828.

Nearly all of Cynthia’s day gowns continue to be à la mode, although she starts getting nicer fabrics — shiny silks instead of Molly’s more functional cottons: 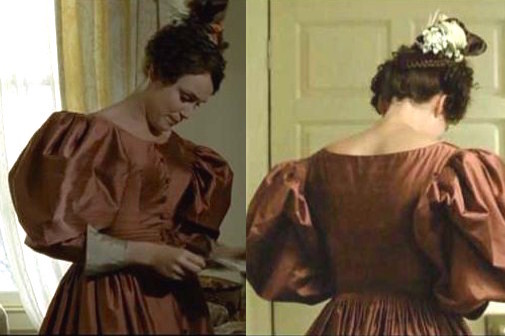 Brown silk taffeta with huuuuge sleeves. Note the turn-back cuffs as well!
Via The Dashwood Sisters. 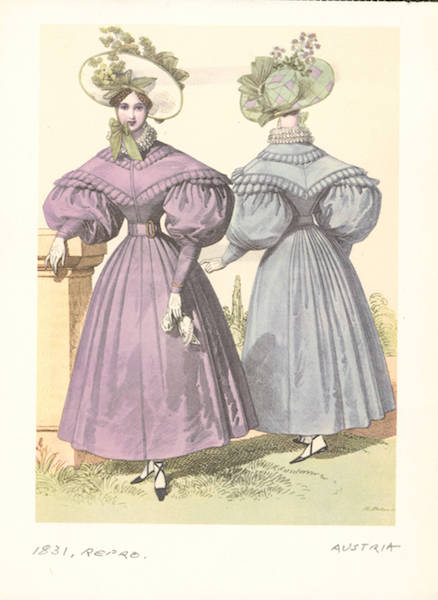 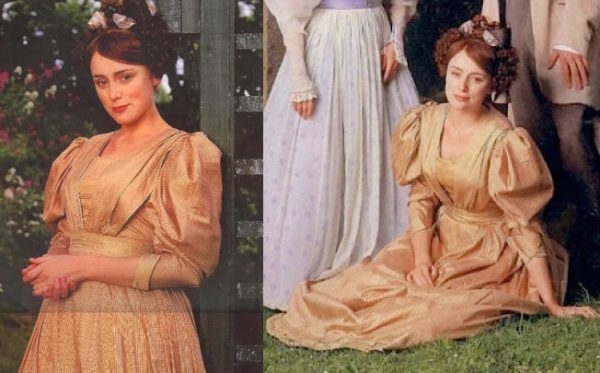 It’s hard to tell what this fabric is, but it has a sheen to it — and the draped bits on the front of the bodice add a nice bit of visual interest. 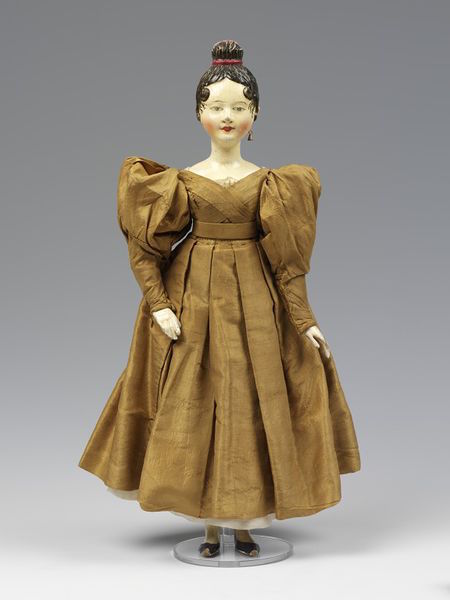 Compare Cynthia’s gold dress to the one worn by this Doll, 1832 from the Victoria & Albert Museum.

Cynthia does occasionally wear cotton prints, but even then, she keeps to fashionable style lines: 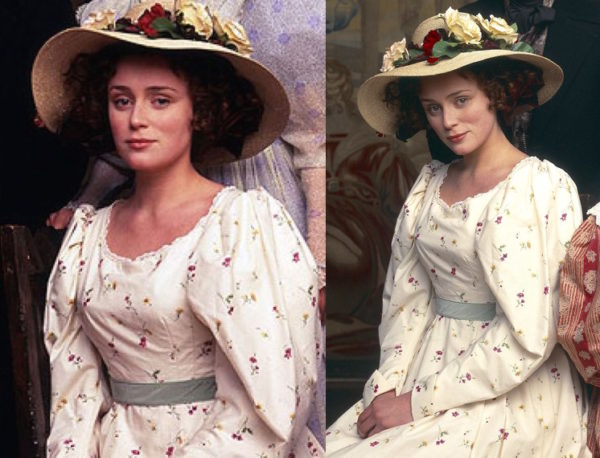 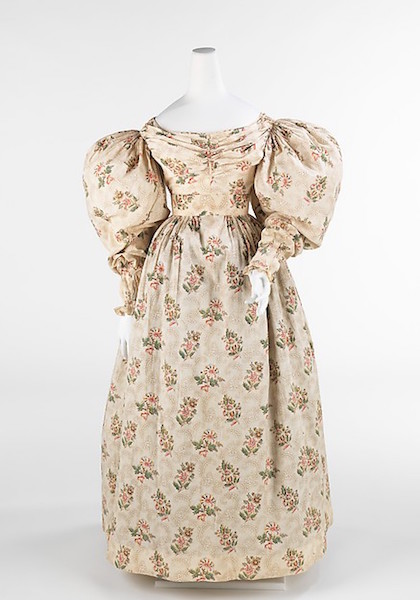 Cynthia’s gown is simpler in the bodice, but otherwise recalls this cotton print dress.
Dress, 1832-5, Metropolitan Museum of Art.

Cynthia doesn’t wear jumpers (sleeveless overgowns) as often as Molly, but she does have one (see the comments on Molly’s post for an interesting discussion about the historical accuracy of these jumpers): 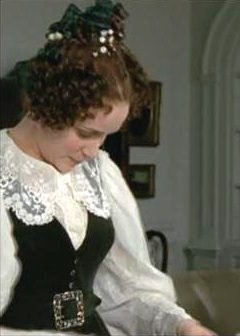 The wide lace collar and the big square buckle are super fashionable and elevate the look.
Via The Dashwood Sisters. 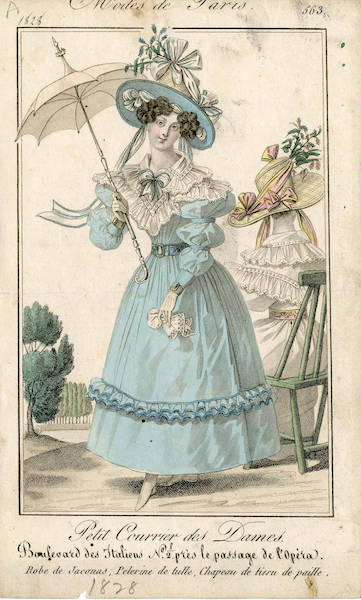 Big buckles on sashes were very fashionable from the late 1820s through the 1830s, like on this plate.
Petit Courrier des Dames, 1828.

This next  dress is worn for both day and evening. The sleeves are more sedate in terms of size, although that’s made up for by the embroidery on the collar and bodice and the stripes on the skirt: 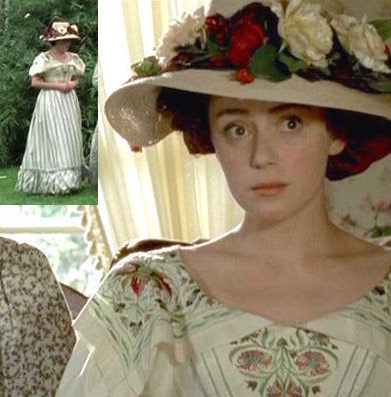 The fact that the bodice and skirt fabric don’t match makes me think they found an embroidered piece big enough to make the bodice, and then worked from there.
Via The Dashwood Sisters. 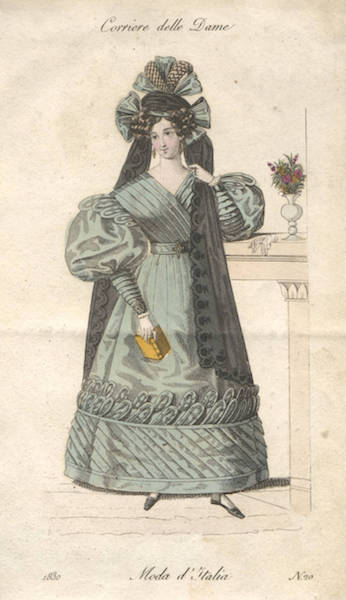 The lower-third skirt trim, emphasizing the diagonal/bias, is very typical of the 1830s.
Moda d’Italia, 1830.

Next, let’s look at evening wear: 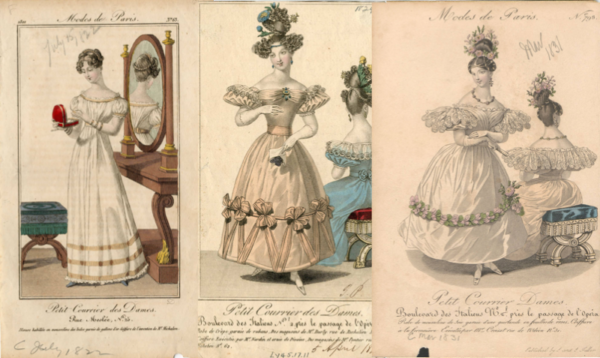 Again, I want to point out how Wives & Daughters is not depicting mid- to late-1830s fashions: 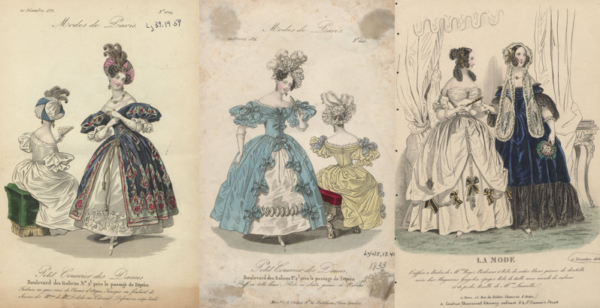 Mid-1830s evening gown sleeves continue to be full, but that fullness gets very horizontal/oval shaped (far left and center) instead of the rounded puff seen earlier. And, just like in daywear, by about 1836-7, the sleeve fullness almost completely collapses, with fitted upper arms and just a bit of fullness above the elbow. Again, nothing like these later styles shows up in W&D on screen.
Petit Courrier des Dames, 1832 | Petit Courrier des Dames, 1833 | La Mode, 1838.

Cynthia gets two main evening looks. Interestingly, while her first evening dress (for the charity ball) is beautiful and intricate, its sleeve style and skirt silhouette are more late 1820s (although the waistline placement is more 1830s). The gown is definitely more shiny and complicated than Molly’s, of course — it looks like a peach or pink silk taffeta, with sheer organza puffings for trim. Clearly they wanted Cynthia to be more sparkly in this scene and to contrast her with Molly’s white purity. My theory on the slightly-out-of-date-ness of the style lines is that it’s to contrast with Cynthia’s later evening gown worn in London (below), showing that she’s continuing to mature. 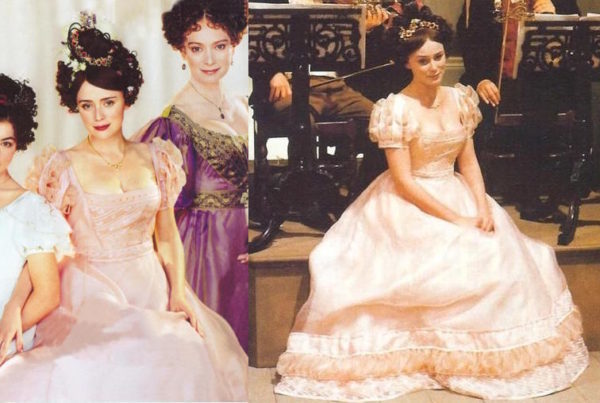 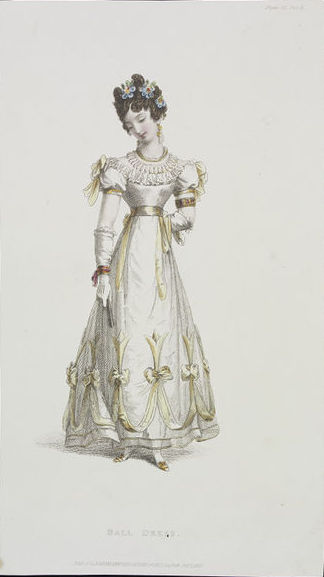 Everything about Cynthia’s dress — from the silhouette, sleeve style, waist placement, and trim — are very 1820s.
Ackermann’s Repository of Arts, 1827.

Here’s Cynthia’s London ballgown, worn near the end of the series. LOVE LOVE LOVE. Changeable blue/green silk taffeta with huuuuuuge oversleeve layers with gold-trimmed dags! Plus, THAT HAIR. OMGPONIES!!! This is the height of fashion — for the early 1830s — particularly compared to the other clothes worn by Molly and Cynthia, and the darker color reads much more sophisticated than anything else worn by either of them. Note, again, how Cynthia’s sleeves continue to be very full and rounded, not the fitted upper arm/small puff above the elbow seen from 1836 onwards. 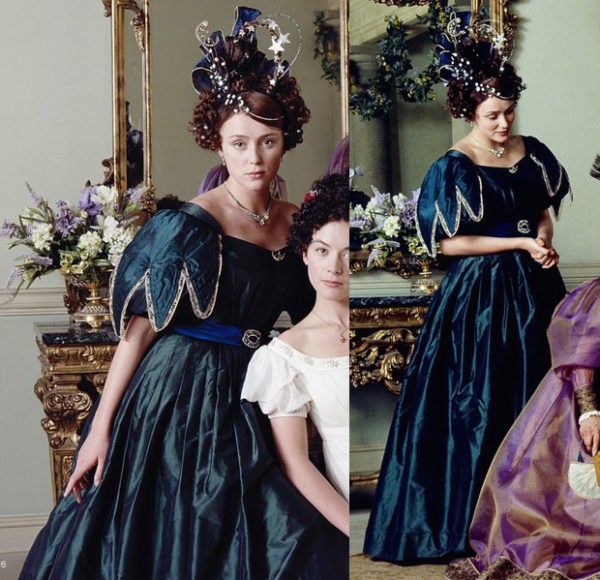 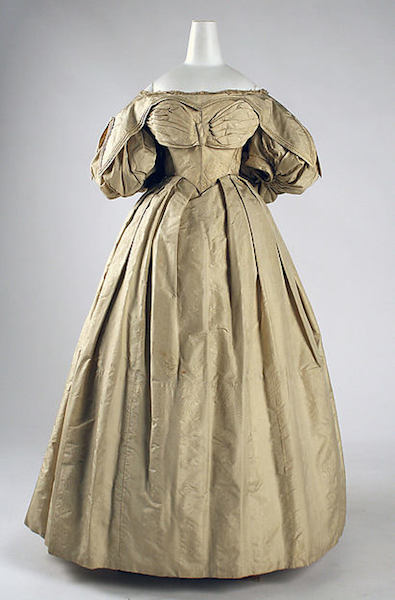 Which is your favorite of Cynthia’s costumes in Wives & Daughters?