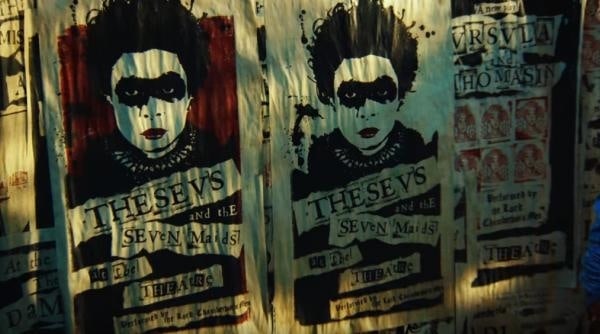 I watched the first episode of Will on TNT, and here’s what I’ve got. I make no promises of coherence, cleverness, or brilliant insights (but neither does this TV show). There were a lot of cocktails, a lot of messy screencapping, and some unclear conclusions, late on a work night, oh the things I do for you people! 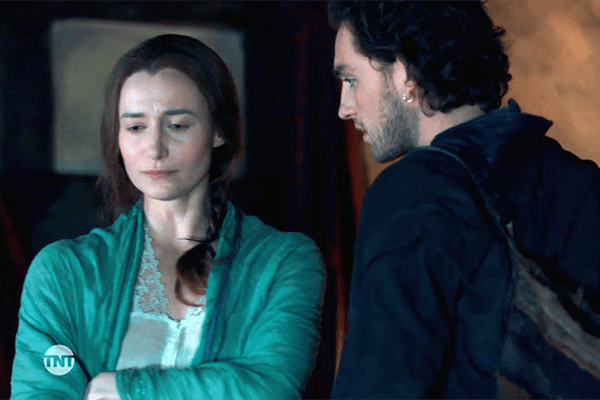 OK, they got it right that 18-year-old Will married an older Anne — at 26, she might as well have been dead, apparently. 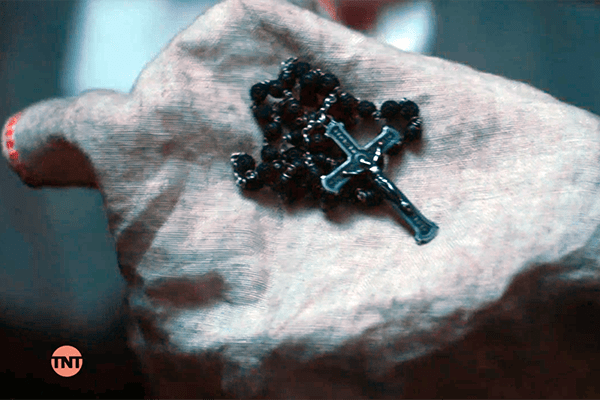 Setting up Shakespeare as a Catholic — let’s go right for the scholarly debates from the start, whoo-hoo! (Tho’ I’ll note that this is a pretty modern-looking rosary.) 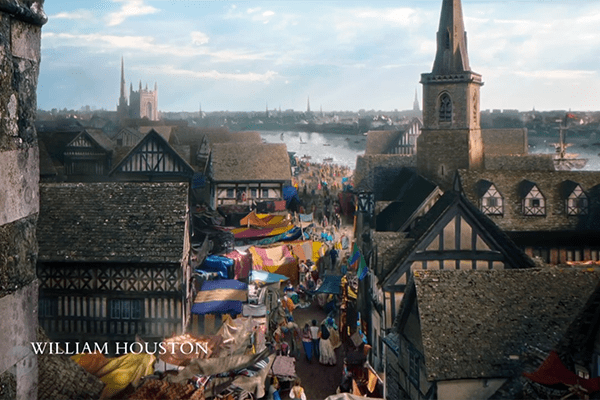 3 minutes in, we’re hit with “London Calling” by the Clash. A bit obvious, no? 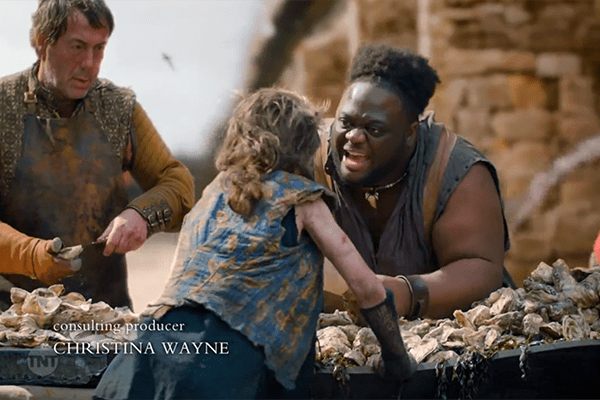 This obnoxious kid will be a plot point. Meanwhile, exotic animals and people roam the streets of London 1589. 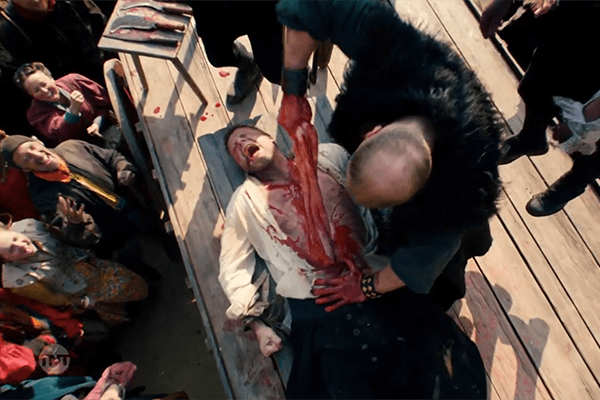 Also, this torturing / tortured Catholic stuff is going to be a theme. 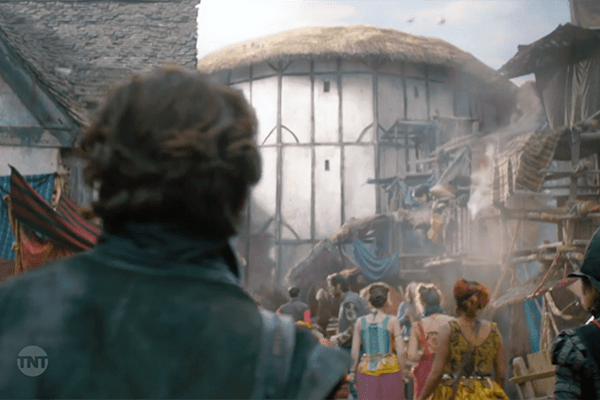 Quick, switch the soundtrack to the Jam’s “That’s Entertainment” and head to the Globe Theater. 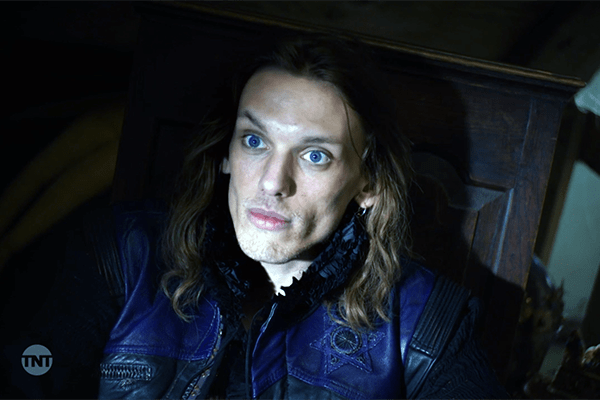 Enter Christopher Marlowe, super spy. No, really, that’s his role in this show, because there can only be one playwright (it’s like Highlander). 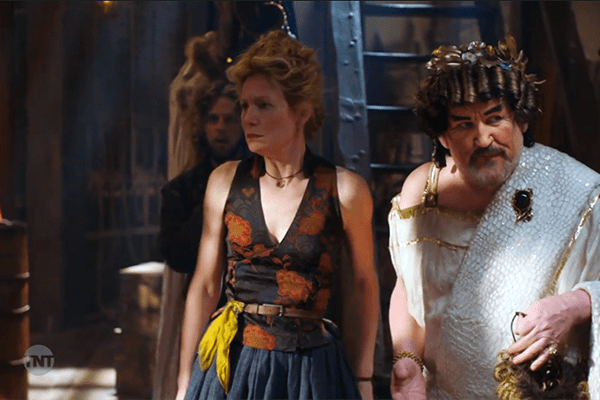 WTF is up with this woman’s halter top? Also, Colm Meaney is wholly unrecognizable to me here as James Burbage, the theater manager.

Actors getting jiggy backstage. As you do. 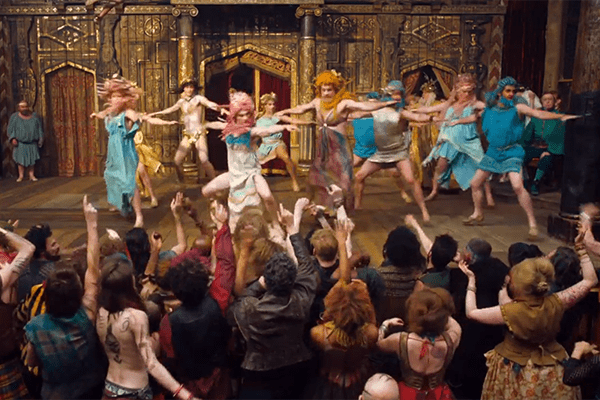 The play sucks, the actors attempt to jazz hands their way out of it, and everyone riots. As you do. 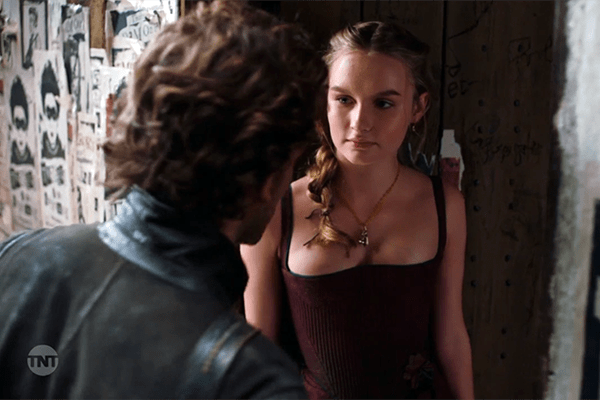 Will gets the hots for Alice Burbage, fictional daughter of the theater manager. As you do. 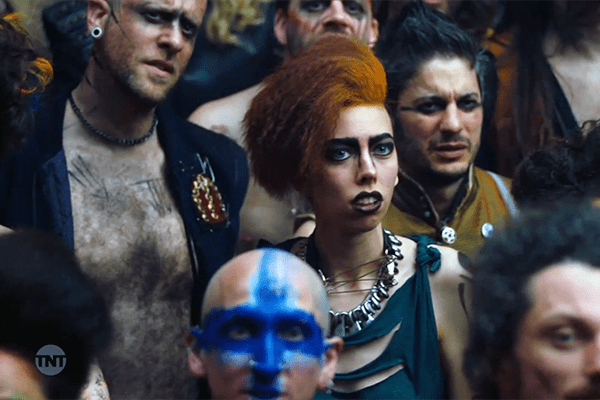 I think I went to high school with that chick. And dated the guy on the left. 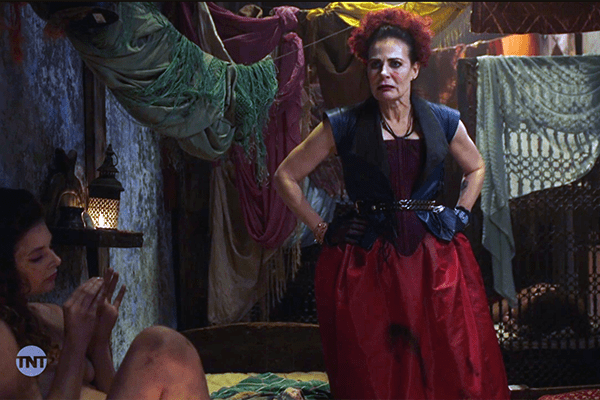 This is me when I have to get up early to work renfaire. Just ask Kendra. 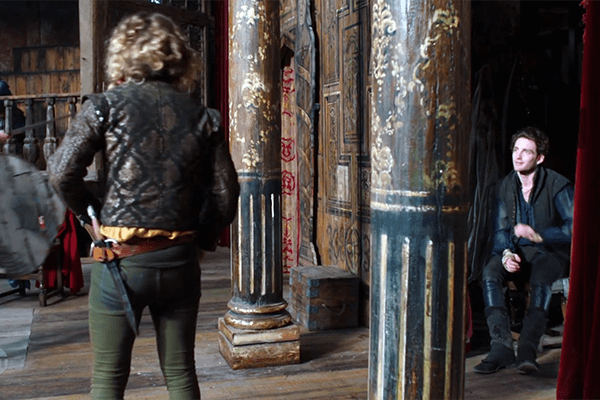 I’ll give you the accurate recreation of the Globe Theater, but the skinny jeans? No. 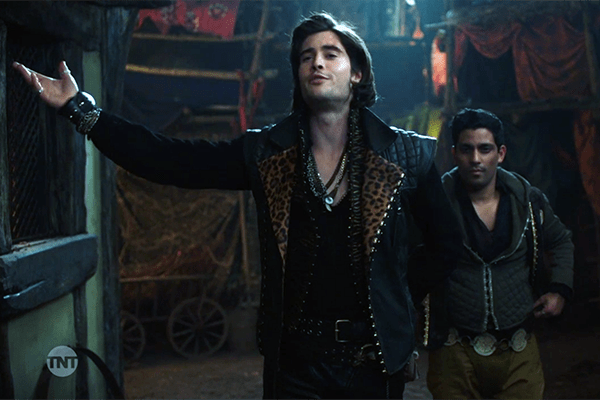 “Live fast, die young, and leave a pox-ridden corpse,” — You’re not that clever, Richard Burbage, nor that hot. 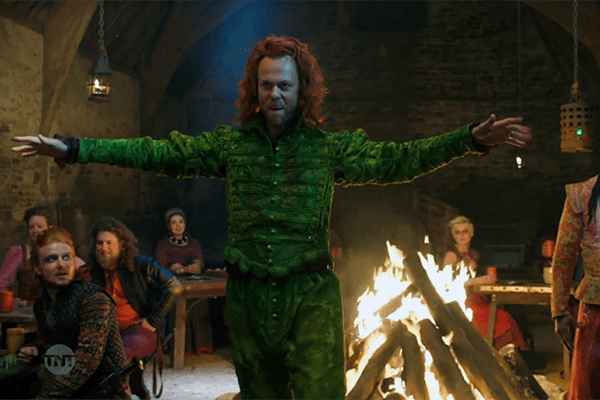 Will is challenged to an actual battle of wits, in iambic pentameter by this Greene character. Pretty sure I saw him do it at a renfaire. 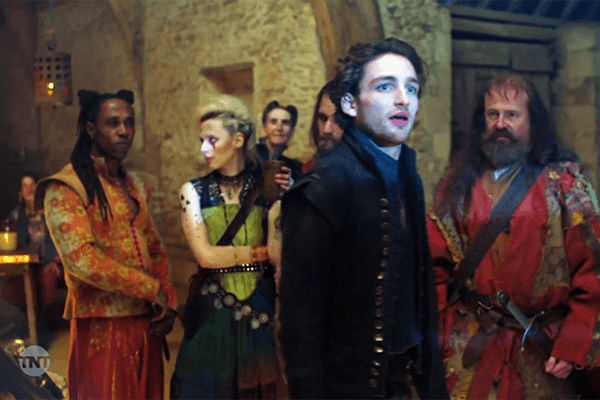 In fact, this is one our standard gigs at renfaire. AND YOU THOUGHT YOU WERE SO CUTE, HAH. 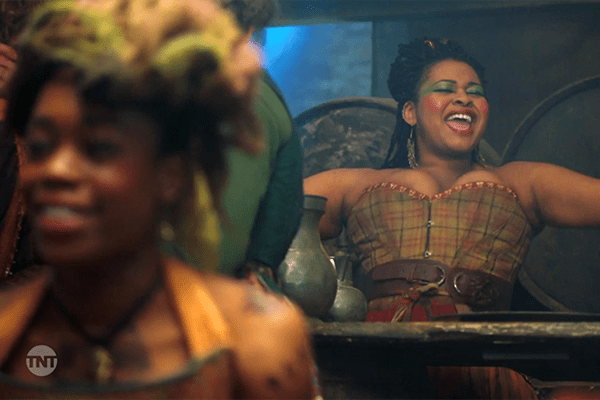 In addition to the startling lack of chemises, I’m irritated that the show uses people of color as so much set dressing. All the named characters on IMDB are white, while the crowd scenes are distinctly multiracial. 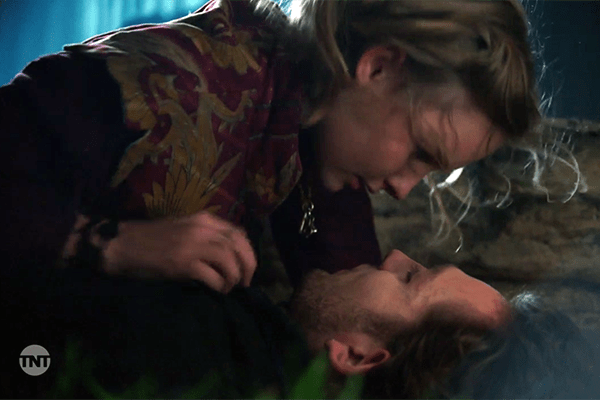 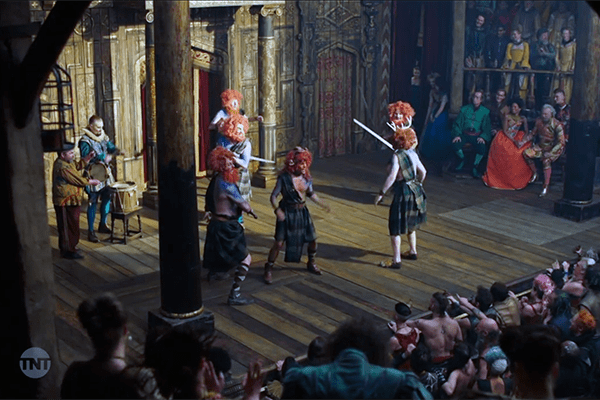 Meanwhile, the play’s the thing, and everyone loves a cliche Scottish joke, amirite? 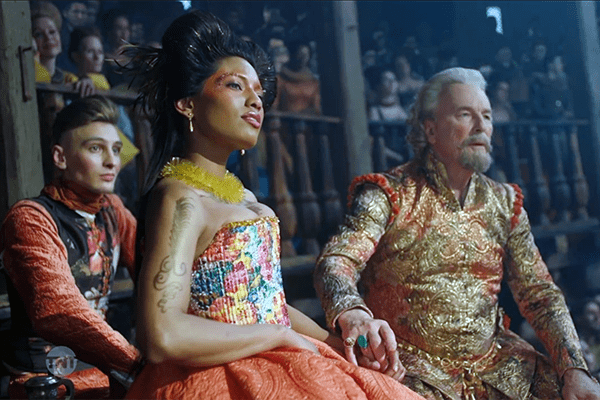 This theater is underwritten by the generous patronage of Lord and Lady ShinyPants of Dead Dino Manor. 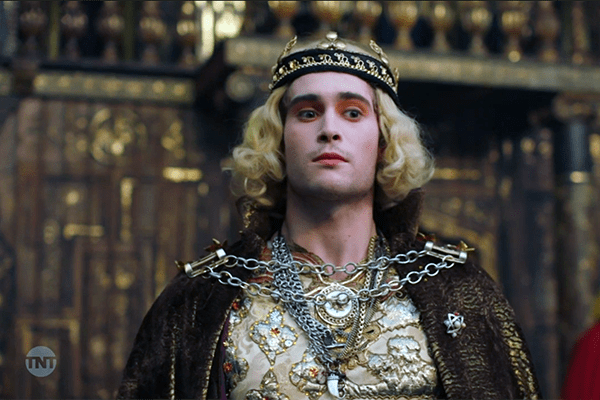 Somehow, Will makes a real actor out of his loudmouth pal. 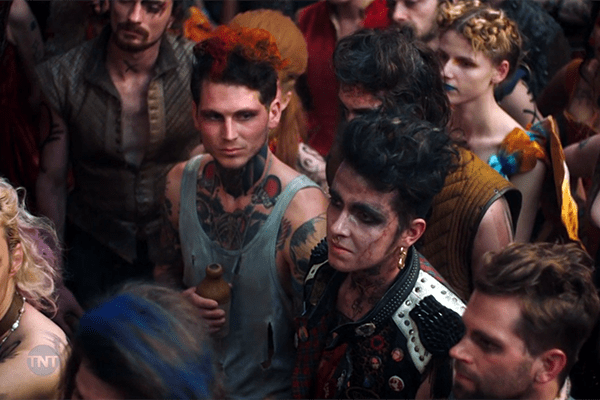 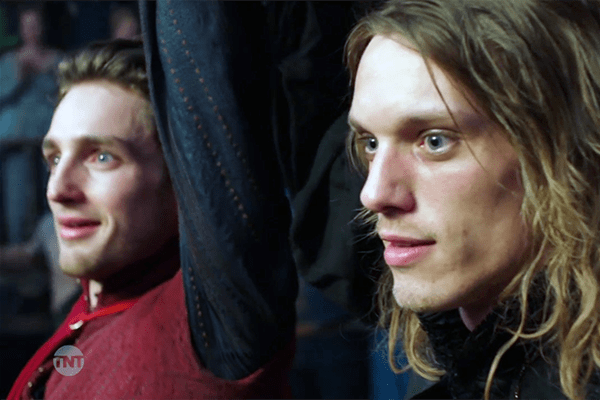 Marlowe decides not to take credit for the play and not to turn in Will — because he’s a sneaky bastard.

I don’t know what to think about this show. Will is not as 100% terrible as it looked in the previews — and it’s just not as train-wreckingly awful that makes for good fun either. The visuals are over the top, to be sure, and I can’t quite tell, yet, if the costume design has a real internal consistency. I’m getting 1980s punk on top of 16th-century renfaire mixed with a bunch of random modern 21st-century bits, so the look is a hodgepodge. Especially when you consider that the stage costumes (which make up a bulk of the visuals) bear a strong resemblance to what would have been used as renaissance stage costumes. If you’re a purist, there’s plenty to snark, but the more I look at it, the more I think, yeah, that’s my kind of style. Except the punk theme is inconsistent as far as the soundtrack goes — a mere three modern tunes in the whole episode. C’mon, Sophia Coppola’s Marie-Antoinette did better.

Then there’s the story — there too, Will is almost, but not quite, outrageous. The plot draws from Shakespeare’s already sketchy biography and includes some of the rumor and innuendo about him. The dialog even weaves in a hint of Shakespeare’s text every so often. Fair enough, plenty of biographical adaptions have done these things. Nothing is super soap opera-y, unlike, say Still Star Crossed, in terms of plot points, although nothing has been insanely original either. The acting is a little uneven, but it’s not bad, though I fear that there won’t be much for the female characters to do of interest.

TNT actually ran a second episode after this on Monday, but I didn’t have the time / energy / give-a-fuck to watch it yet. #SorryNotSorry. Maybe watching it will help me decide one way or the other about this show? I CAN’T TELL.

What about you? Are you on the fence about Will or in full hate-watch mode?