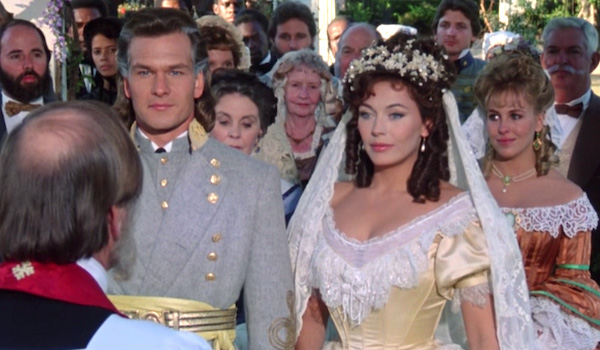 Tons of frock flicks are set during the American Civil War — from Gone With the Wind (1939) to every version of Little Women. Some focus on the battles like Glory (1989), while others are have a story more tangential to the war like The Beguiled (2017). But there are some unavoidable facts about the history that we, as Americans in 2021 (and especially as white Americans with a largely white audience), cannot avoid when reviewing movies and TV shows that use this time period as a backdrop.

Fact: The American Civil War was about slavery. The Confederate states wanted to leave the United States of America because they wanted to keep buying and selling human beings and enslaving human beings to work without wages or hope of freedom from enslavement.

How this affects frock flicks is that some movies and TV shows — especially, but not limited to, older productions — may tend to glorify an idea of the “genteel” Old South and that “Southern way of life” which “honorable” men and women just wanted to preserve via succession. Translation: Those people wanted slavery, they liked slavery, they were willing to fight and die to keep slavery. So why the fuck should anyone glamorize that?

Gone With the Wind (1939) is the most obvious example of a frock flick that paints a beautiful picture of ye olde Antebellum South, and within the fantasy world of that story, the characters are forever trying to return to that pretty picture of Tara. The war itself is horrible for the South. Reconstruction is awful for the South. And the Black characters are one-dimensional accessories to the white characters, doing their bidding even when they’re “free.”

GWTW didn’t invent the Lost Cause fallacy — the ideas began as soon as the Civil War ended — but that book and movie sure as hell reinforced the Lost Cause ideals. And plenty of movies and TV shows have cashed in on the tropes established in GWTW ever since. Wealthy Southern family? Check. Big fancy house? Check. Sassy daughter/son with implausible romantic adventures? Check? Actual cause and effects of the war ignored? Check. Enslaved people either nonexistent or happily subservient? Check and check. North and South, Books I through a million, we’re looking at you!

Sorry, we have to remind you that you can’t have this: 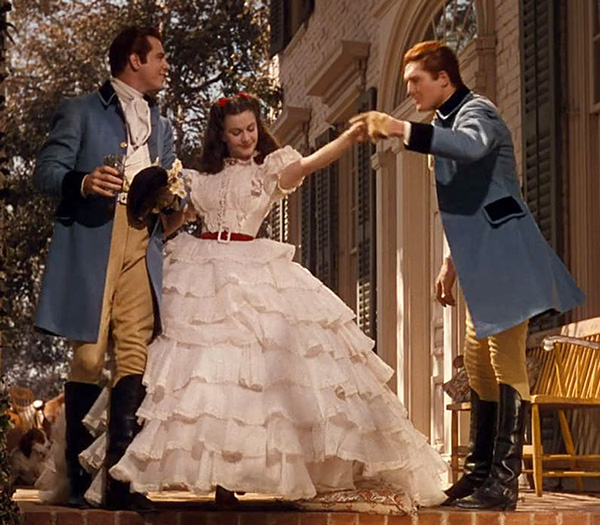 In 1939’s Gone With the Wind, Scarlett wears a froofy white dress to meet admirers. 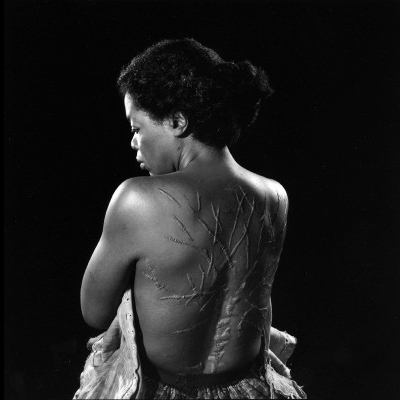 In 1998’s Beloved, Sethe (Oprah Winfrey) has a “choke cherry tree” pattern of scars on her back from being brutally whipped during enslavement.

That fantasy of Dixie Land where “old times there are not forgotten” has been perpetuated in media ever since the Civil War ended, and movies and TV shows simply magnify the tendency. Some might say to just ignore it or let it go, those flicks are “of their time” and it’s not important. They’re just “relics” and movies/TV shows are just “entertainment.”

But we Americans need to do better. On January 6, 2021, we saw exactly what happens when you just ignore things. Domestic terrorists attempted a coup by breaking into the U.S. Capitol building, and many in the crowd were avowed white nationalists. They waved the Confederate flag inside the Capitol, which didn’t even happen during the Civil War!

So no, we are not going to give a break to old movies or TV shows that soft-pedal the Confederacy. They’re part of the problem in our country, and we are sick and tired of it. We can’t ignore relics of white supremacy anymore, and we’re sorry if we have appeared to before. Just like punching Nazis, we 100% stand for snarking the Confederacy today and forever more.

If this seems like a no-brainer to you, whew, thank you! But comments popped up around the latest Snark Week reviews of North & South: Book II (1986) showing that someone in our audience is so attached to the Lost Cause of the Confederacy that she’d go to great lengths (such as creating multiple accounts to post and email!) to defend a shitty 1980s miniseries that privileges a fantasy white Southern POV over reality. Even one is too many for us, thus requiring this statement.

We hope that anyone who holds Southern Confederacy or Antebellum South media dear ask themselves why it’s so important to them. The “just a pretty dress” defense only goes so far. Sure, we can admire the design work and the artistry that went into costumes, such as those by Walter Plunkett in GWTW. Likewise, the actors may have created fine performances, worthy of all their awards and accolades. [Caveat: Neither the costumes nor acting in North & South are worth defending in our eyes!] But when you look at those old faves, don’t forget to look at that media as a whole and in today’s context. Don’t let romanticism or nostalgia triumph over reality and justice.

Everyone has problematic favorites, we can’t escape it. Whether because of the content, the context, the people who made it, the times it was made in, etc. If someone says “hey, that thing is problematic” — or in our case, we snark your thing! — maybe you should investigate your own reaction to that before lashing out at the other person. Why are you so invested in that thing being precious and unassailable?

I’ll note that 98% of the time, even people who legit worked on a thing that we’ve snarked have NOT complained to us. They either have better things to do or they’re secure in their work (except for this one, lol). So I really wonder at anyone who leans in hard to defend an old movie or show that has clearly not aged well in historical and social themes, much the less costumes.

Finally, let me remind you that this blog is a hobby project run by three people for fun, for free (aside from 10 posts a year on Patreon), and outside of our day-jobs. We are allowed to set whatever boundaries we want on the content we create and the comments on our site and social media. Those who don’t like our opinions don’t need to read us!

Are you with us on the side of snark? Note: Any whataboutism will be deleted.