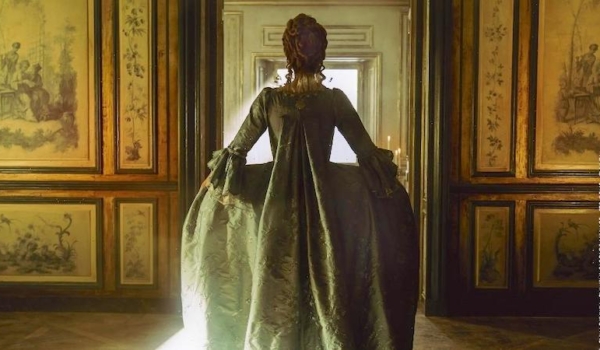 Sometimes the three of us who write for Frock Flicks have varying opinions on costumes in historical movies and TV shows. For example, I admit, I thought Trystan was overly meh about the semi-historically accurate but not-train-wrecky costumes in Becoming Elizabeth. But now it’s me who is vastly underwhelmed by what I’ve just seen of the not overly terrible, but still sad trombone-y for me, costumes in the forthcoming Marie Antoinette TV series being made by BBC and Canal +. I honestly wasn’t originally going to say a word about my reaction, but then I thought it’s been a few days since we overreacted/nitpicked something, so what the hell!

The series is being created by Deborah Davis, writer of The Favourite, which makes me hopeful. And it’s being filmed in France, including at the palace of Versailles, which is also a good sign. The costumes are being designed by Marie Frémont, a French designer who’s only other lead designer credit is for a modern-set film, but who worked on Versailles and The Last Duel, among others.

For a while, the only glimpse we’ve had of the series was the back shot above of German actress Emilia Schüle in the title role. “A decent robe à la française, I shall reserve judgement,” I thought. I’ve occasionally gone to look for more from this forthcoming series and seen nada, but I’ve bided my time. Then finally this image popped up:

To which I went:

And here’s where I may lose 90% of you, because yes, that’s a nicely made, well-fitted costume that is totally in the realm of the year 1770. So what’s my irritation?

In general, it’s that this story has been done so well by Sophia Coppola (and many others before), and in particular, Milena Canonero’s costumes did such a nice job of balancing the period with subtly tweaked design elements that heightened the story. So if you’re going to take on this story AGAIN, I either want to see something totally stylized à la The Favourite, or super historically accurate, which I don’t know that anyone has done.

Instead, we’ve got what looks like a Cinderella take on Marie-Antoinette. Let’s start with the hair, which is a light reddish brown. Sure, it’s decently styled in a not-too-high style with ringlets, and that red tinge references the fact that the real Marie-Antoinette was a strawberry blonde. But there’s not a drop of the powder that would be absolutely required not only by French fashion but also Austrian. And I’m girding my loins for “foreign princess from a less-fashionable court comes to Versailles and is shocked by the formality.” Which, yes, absolutely happened, but the girl didn’t come from Peoria. The Austrian court was slightly less rigid than Versailles, but it wasn’t a potato patch. They had hair powder, and they used it. In fact, her mother spent a ton of time making sure Marie-Antoinette’s fashion was up-to-snuff and had several portraits painted of her in the French style until they found one that they thought was good enough (the Ducreux painting below). Whether or not she was emotionally prepared for her new role, her damn hair would have been on par when she arrived. 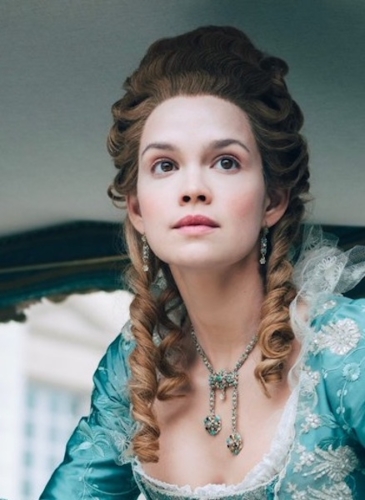 Decent height and ringlets, no powder in sight. 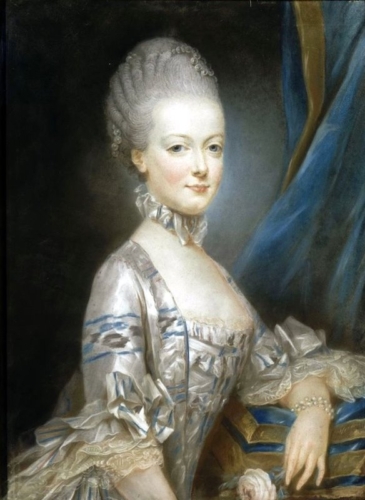 Next, I’ve got all kinds of problems with that standing lace collar. Yes, Renaissance revival fashions were a thing in this era (they were called “Spanish” or “troubadour”). But I feel like this isn’t the time or place for it and makes this ensemble read even more Cinderella-y. I’m nitpicking here, people! 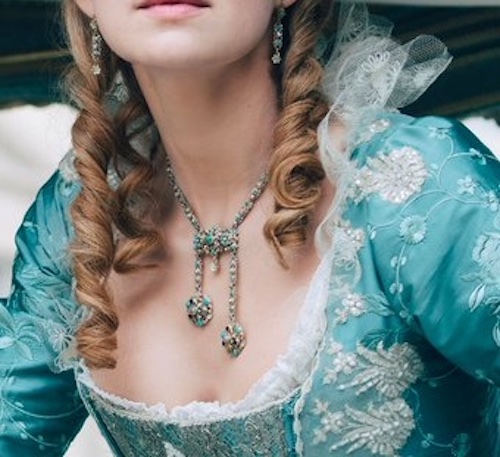 See how the neckline lace gets higher in back? 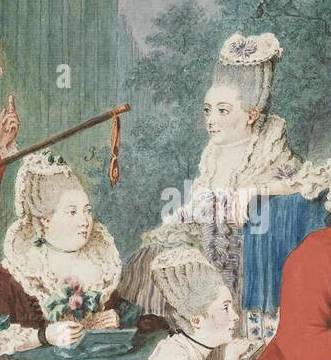 It’s absolutely something that was done in the period, but it just rubs me the wrong way in this instance | Detail from The salon of the Duke of Orléans (sitting); he is with his son (standing) by Louis Carrogis Carmontelle, c. 1770 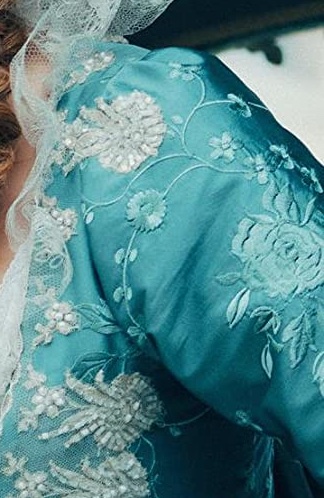 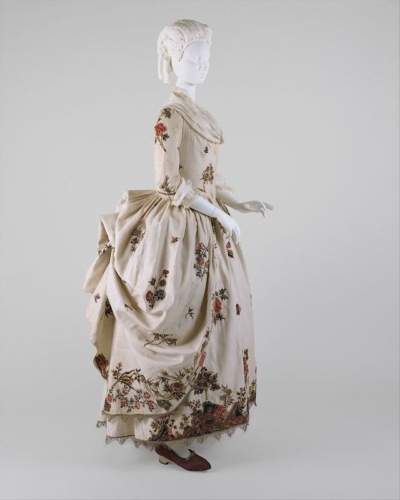 Most embroidery was done to suit the shapes of the dress | Robe a la polonaise, c 1780, Met Museum 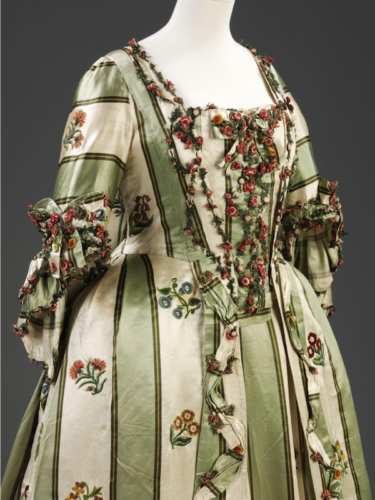 Even when it was more all-over, it never goes into the seams, because why would you embroider if you’re just going to cut away? Sack 1760s-70, Victoria & Albert Museum 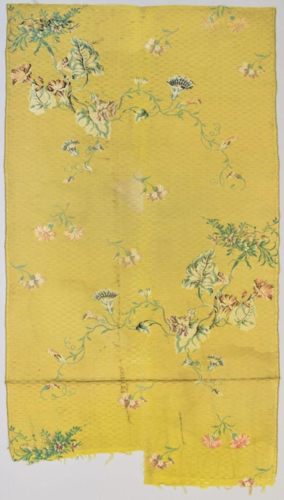 The all-over patterns most modern machine embroideries are trying to reproduce were actually woven in the period | Woven Silk, 1730-69, Victoria & Albert Museum

And finally, CAN WE TALK ABOUT THAT BEADED LACE ON THE STOMACHER AND ALONG THE FRONT EDGES OF THE GOWN, WHICH ARE IN NO WAY AN 18TH-CENTURY AESTHETIC: 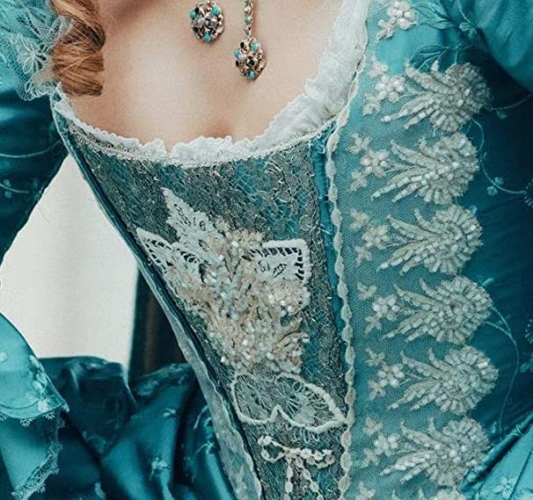 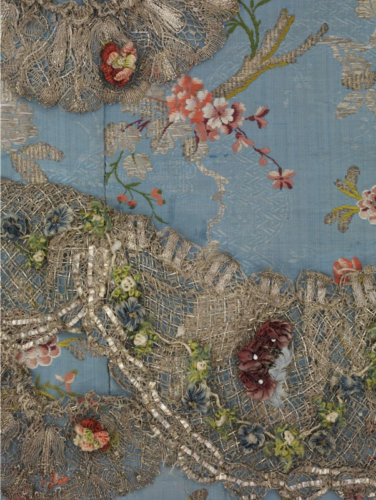 I was all set to say I didn’t even think that they beaded lace at all, but I found this sack with glass beads added. Nonetheless, the aesthetic is totally different | Sack, 1755-60s, Victoria & Albert Museum 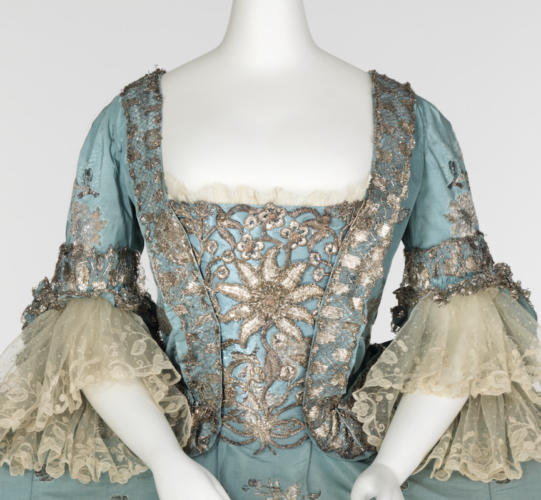 I think they were going for something like the metallic embroidery and lace on this British court dress, but to me, it’s a very different result | Court dress, c. 1750, Metropolitan Museum of Art 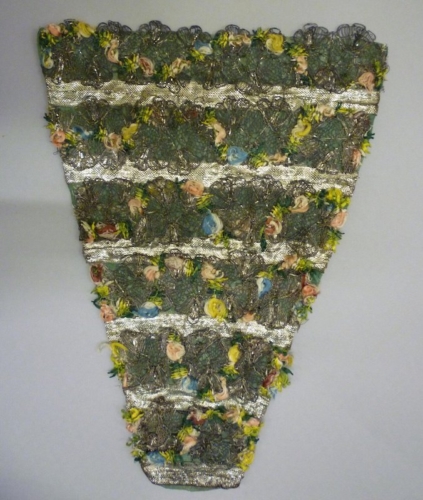 Here’s an example of an embellished lace stomacher from the period | Stomacher, 1750, Victoria & Albert Museum

All of this is total nitpicks from someone who spends far too much time looking at real 18th-century fashion, I fully admit!

Can you stop yourself from nitpicking when you know an era well?