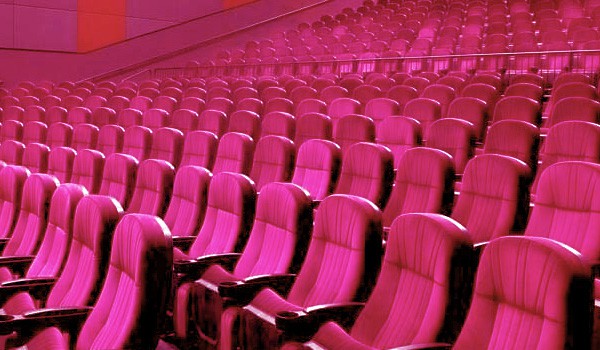 One of the big differences between Frock Flicks and other publications that review movies and TV shows is we do not focus on productions that are currently in theaters or on air. If you read The A.V. Club, Slate’s Movies, NPR Movie Reviews, or many other places, you’ve noticed they can publish a movie or TV review the day that show is first released (sometimes earlier). We can’t.

Now, of course, we never claim to want to review every possible costume drama that’s created — we review what interests us! — but here’s why we rarely review movies that are in theaters right now.

The number one reason why those other places can publish reviews of current flicks is that they have advance copies (aka screeners) of the movies/TV shows that they can watch before the movie/TV shows are released to the general public. That’s how the reviewers can write about it and publish the review immediately.

It used to be common for writers to get invited to advance showings of a movie, and that still happens. But it’s cheaper and easier for companies to send out digital screeners for writers to watch. These are sent to publications on the movie/TV studio’s PR list, and unfortunately, Frock Flicks is flying under most of their radar.

We have received screeners a couple times, and we’ve even managed to find out about the occasional advance showing. I’ve reached out to production companies and studios many, many times, and only in rare instances have they responded. Mostly, I get crickets.

But if you have a solid inside connection, hook me up!

Opening Weekends Are a Hassle

Since we don’t get an advance look with any frequency, I guess we could hit up the movie theaters on opening weekend or try to catch every new TV show the minute it drops. But geez, people, that’s asking a lot!

First, movies may premiere at different times in different places. We track things in our Upcoming Movies page, but we don’t know if that supposed general release will actually be playing at a theater near where we live (even though we’re in a major U.S. metropolitan area). Just one example is The Warrior Queen of Jhansi (2019) — we were excited to see that movie late last year, but it was only playing at a theater about 40 minutes away from any of us live. We debated but took too long, and then the movie left the theater.

Second, big movies with wide releases may be crowded and just plain annoying to see during opening weekend. Little Women (2019) opened on Christmas last year, and about 5 seconds later, many of you were clamoring for our review. While we’re flattered that you want to hear our take, we’d shut down the blog that week for a winter break (I was traveling, among other things). Getting out to see a movie with hundreds of other people isn’t always easy when this is just your hobby.

New TV shows can be a little easier, but we do have to put in the time to watch all or at least enough episodes to review. If the entire series drops on Netflix or Amazon at once, maybe we can binge it in a weekend, if we have time. But if the show is airing weekly on PBS or HBO, we have to wait to watch it just like you do (see: no screeners, above).

We Need Screencaps to Review Costumes

Because we’re reviewing for historical costumes, we need images to refer to in our posts. Sure, we started out as a podcast, but our track record was never very consistent. The vast majority of our content is blog posts with pictures that show what we did and did not like about the historical costumes in movies and TV. To do that, we need photos and/or screencaps.

If a movie is still in theaters, all we can get are the few photos from whatever press release has been issued and random behind-the-scenes shots that are floating around the internet. Some currently airing TV shows are also hard to get photos from because they’re not on streaming on digital channels.

But if a movie or TV show is available for streaming, we can make screencaps (or someone else online has!). Then we can zoom in on those metal grommets or back-lacing. Otherwise, it’s just us describing costumes in words, and that’s not half as interesting.

Oh and a note about the few times we have gotten digital screeners — they always have big ol’ watermarks on ’em! Studios aren’t stupid, that’s how they protect their work from getting duplicated before it has premiered in theaters. While we’d just want a little screencap to show a costume detail, we couldn’t do that without getting in trouble.

So take pity on us when it comes to that newly premiered film! If it’s something we’re interested in and want to review, we’ll get to it eventually, just not immediately.