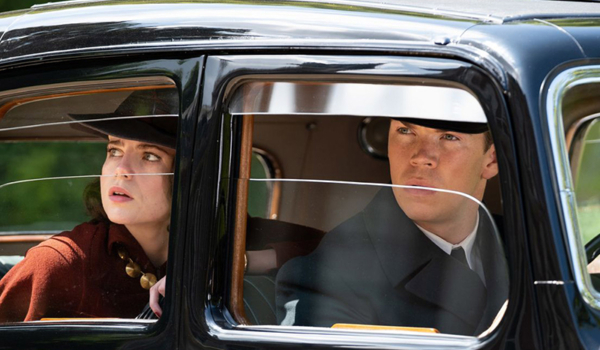 Why Didn’t They Ask Evans (2022) is a new murder mystery miniseries directed by Hugh Laurie that recently dropped on BritBox for those of us in the states. Adapted from the 1934 Agatha Christie novel of the same name, it stars Will Poulter and Lucy Boynton as childhood friends Bobby Jones and Lady Frances “Frankie” Derwent, who resolve to get to the bottom of a savage murder, passed off as a suicide. He’s the clever-yet-penniless son of the local vicar and she’s wealthy nobility, and together they cut quite an attractive crime-solving pair as they traipse around the 1930s English and Welsh countryside. Hugh Laurie, Emma Thompson, and Jim Broadbent all have cameos in this tidy little three-parter, but it’s Poulter and Boynton that are the real joy to watch as Bobby and Frankie try to solve the question at the center of the murder mystery, “Why didn’t they ask Evans?”

The costumes, designed by Laura Smith (who has several assistant designer credits to her name, including Emma, Mary Queen of Scots, and Murder on the Orient Express) are smart-casual for the 1930s, classic blouse-and-skirt combos on the ladies, and neat slacks and sweater vests on the gents, with the occasional foray into evening wear. 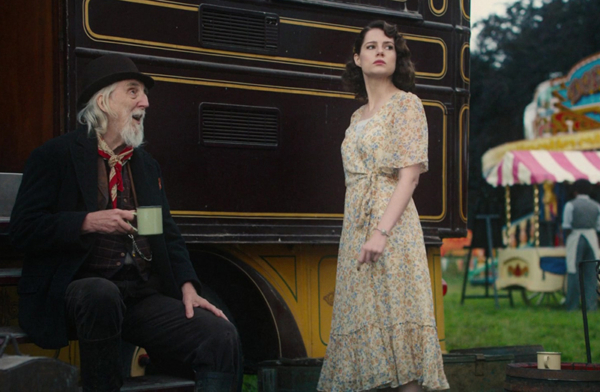 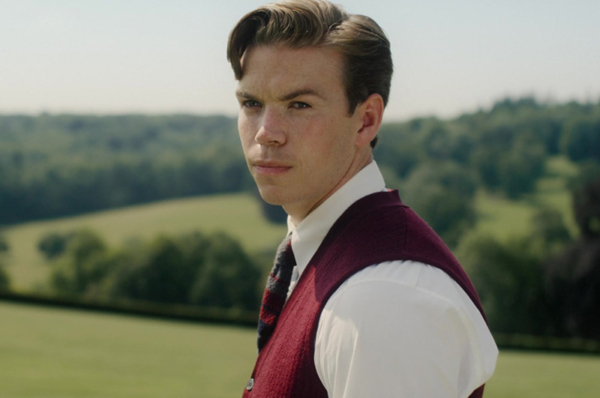 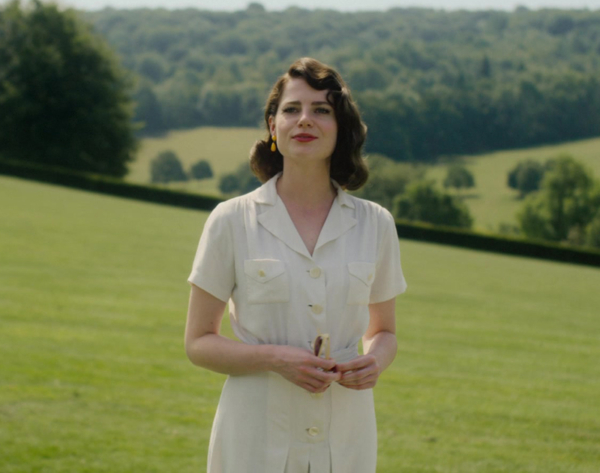 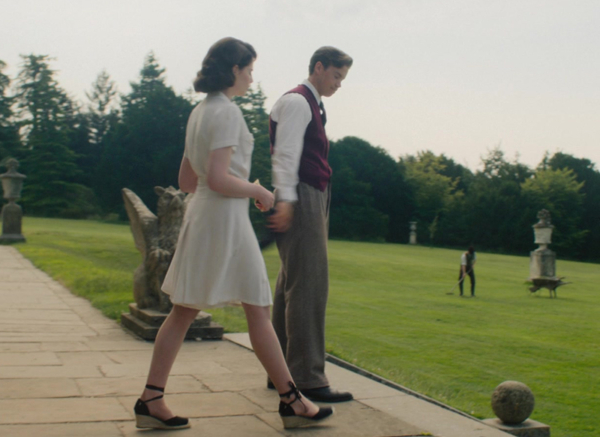 Pretty sure this is actually a skort. 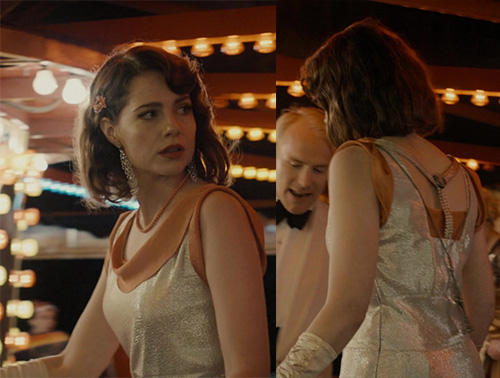 Frankie wears a silver lamé dress purloined from her mother’s wardrobe in the scene at the fair. I liked the back detail. 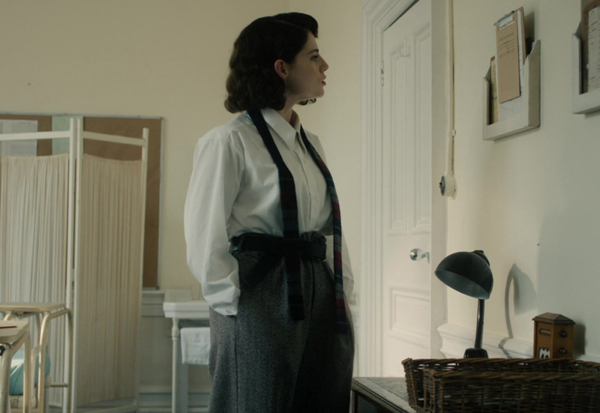 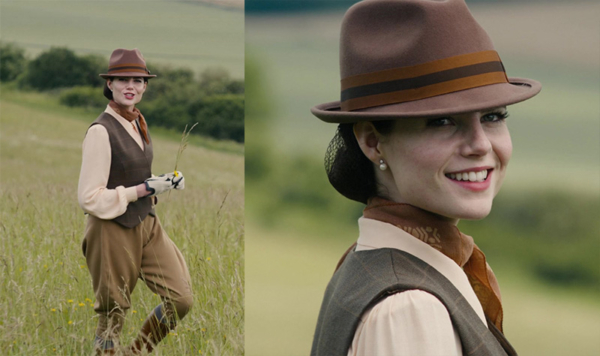 I wish I could make jodhpurs look so effortless. Also, I loved the proper hairnet detail. 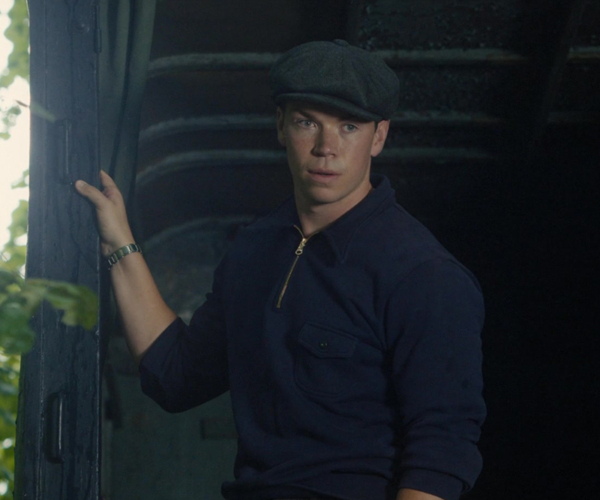 Will Poulter looks like every guy I had a crush on from ages 13 to 16. 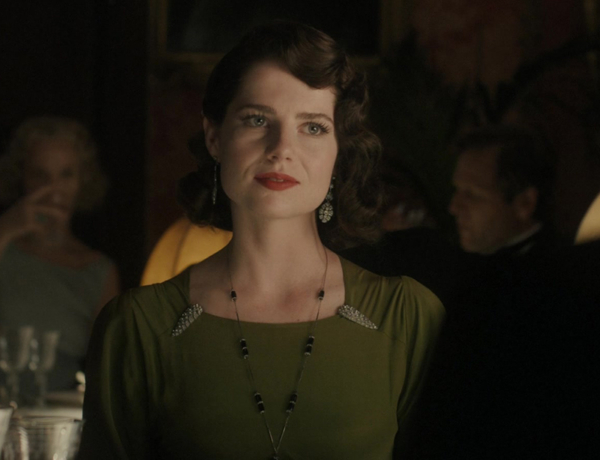 A fabulous green evening gown and understated diamond jewelry for a special dinner out with an old family friend. 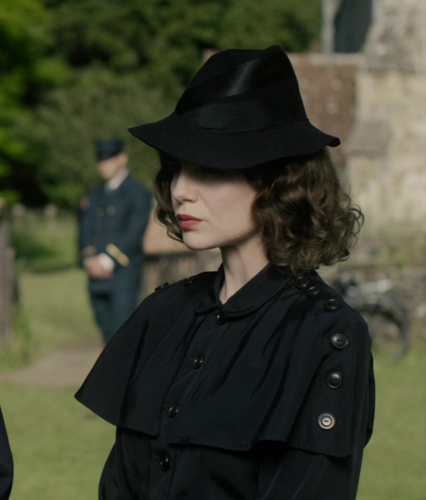 I loved this chic outfit Frankie wears to a funeral. 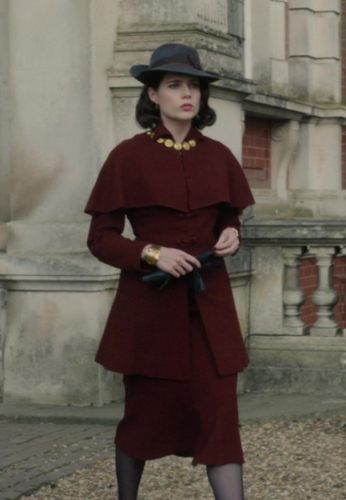 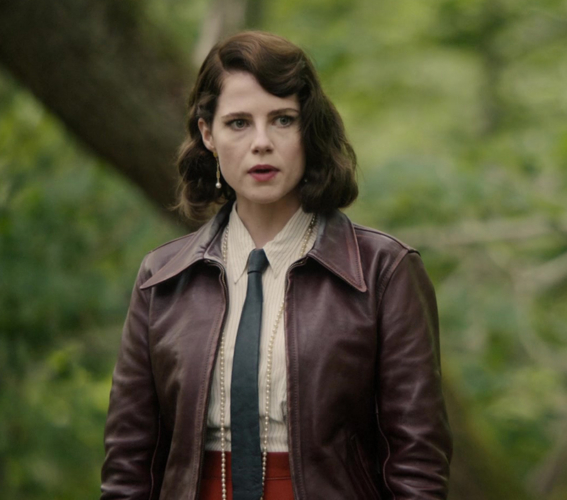 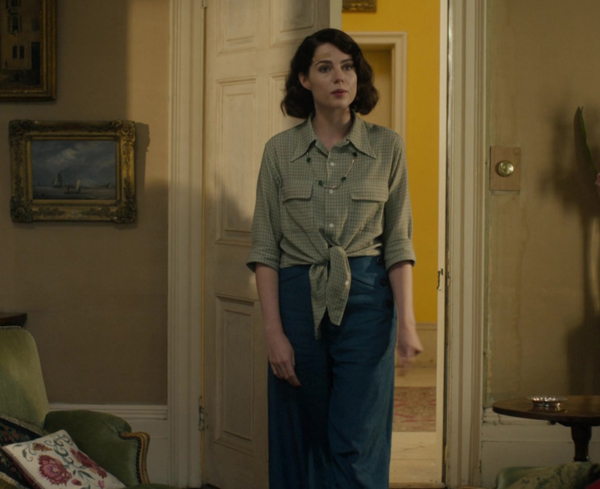 I love her trousers!

The series has some really good hats, too. 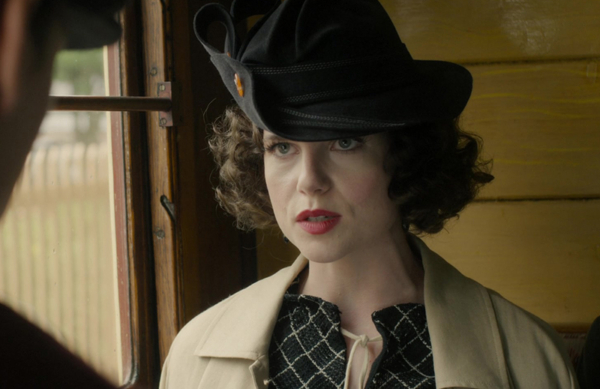 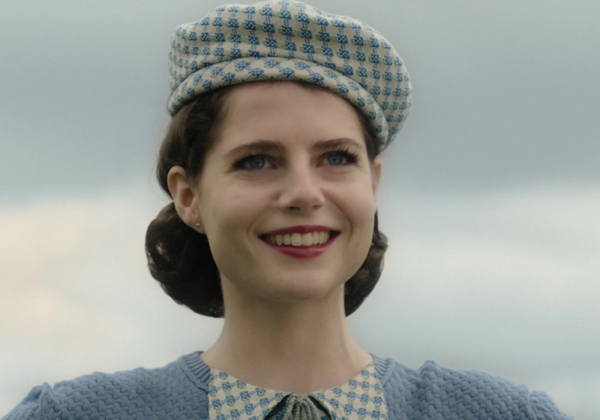 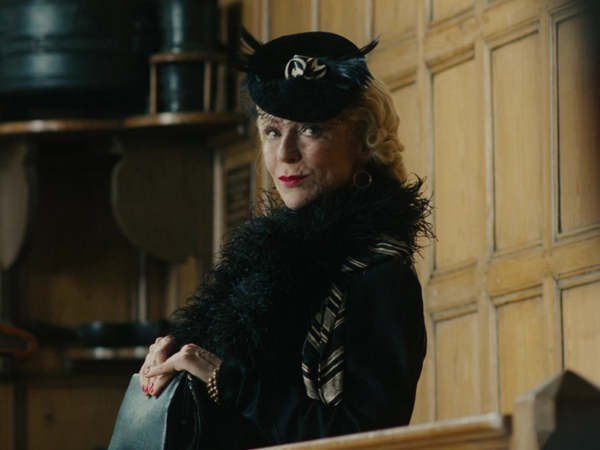 Not surprisingly, Frankie is given the best wardrobe in the series, but here and there were other standouts amongst the rest of the cast. 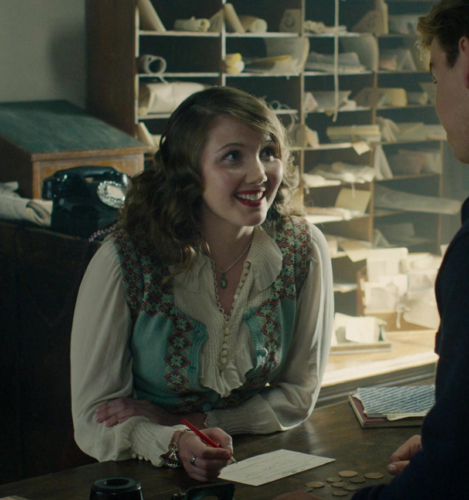 You know I’m a sucker for a good sweater! 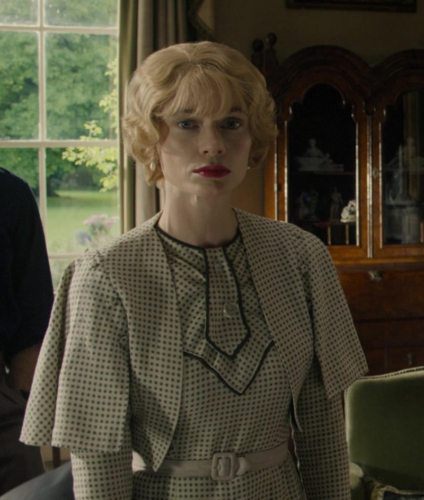 This was probably my most favorite of all the outfits in the show. 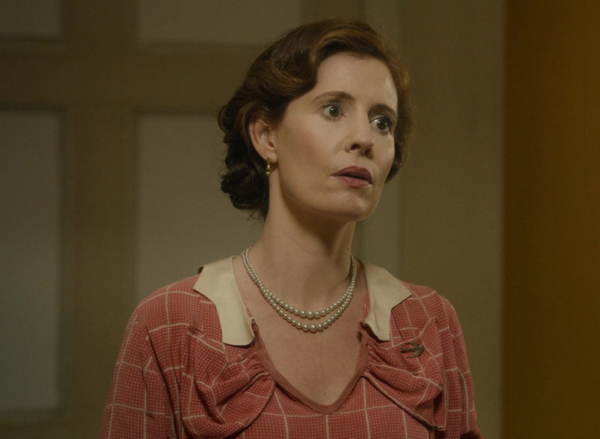 Lots of interesting necklines and collars on the ladies! 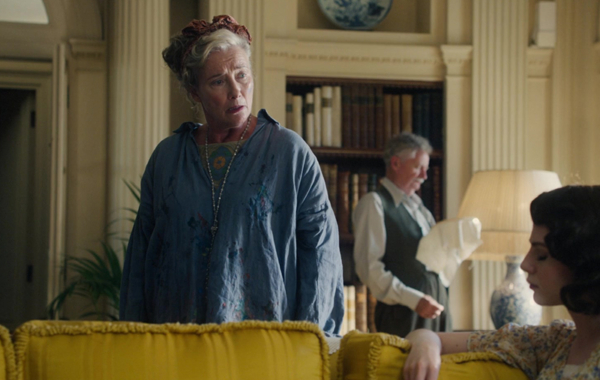 Emma Thompson plays Frankie’s mother, who is obviously a bit of an eccentric. 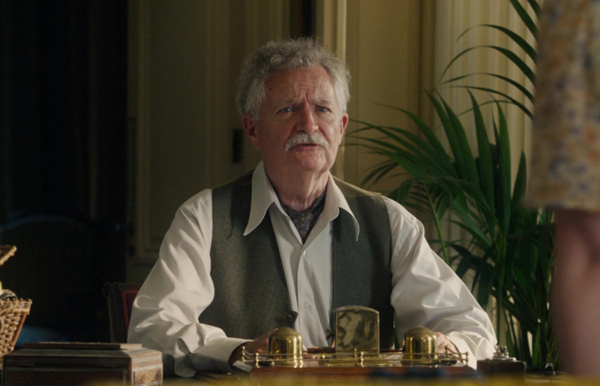 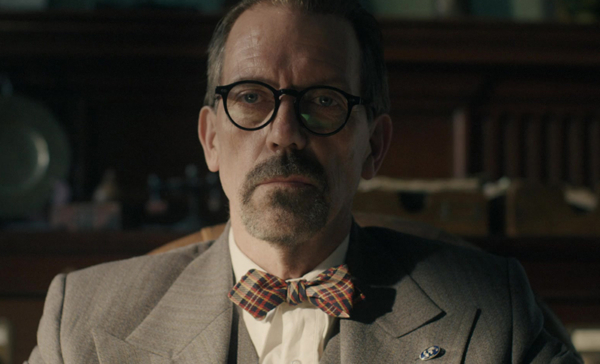 And of course, Hugh Laurie, as a very suspicious and possibly threatening psychiatrist.

I didn’t want to give away the plot, so that’s all the screencaps you’re going to get for now. But I highly recommend watching the miniseries and hope you enjoy it as much as I did!