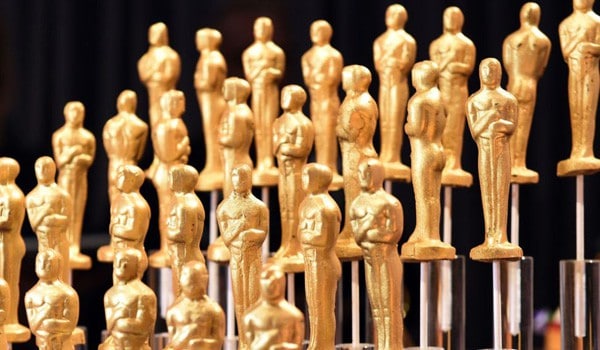 The Academy Awards will be presented this weekend on February 24, and not without controversy. But that’s to be expected when you have a group of 8,000-ish industry insiders voting on movies, most of them being 60-year-old white men. Also, in the costume design category, while the submissions are reviewed by costume designer members of the Academy of Motion Picture Arts and Sciences, the final Oscar vote is open to all members, so you have actors, musical composers, public relations execs, casting directors, etc., all voting. It’s just a popularity contest among movie producers, like any other category.

As I’ve written before, the costume design winners at the Oscars have been overwhelmingly dominated by historical costume. Since the category was combined from two awards (black-and-white and color) to one in 1967, very few non-historical films have won this top honor. In 52 years, only these movies have bucked that trend:

And of those, Grand Budapest Hotel and Fantastic Beasts have nominally historical costumes with fantastical touches, the first flashing back to the 1930s and 1960s, the later being set in a magical version of the 1920s. Modern movies never get nominated for a Best Costume Oscar unless they have some wild element, fantasy and science-fiction movies often get nominated but rarely win, and historical movies rule this award category.

That brings us to this year’s Best Costume Oscar nominations, which are:

We have four historical films and one contemporary comic-book superhero film. All of the designers have been nominated multiple times before, while Sandy Powell has won three times and Alexandra Byrne has won once. Thus, obvious choices. In my opinion, there is only one obvious choice to win, and that is Ruth E. Carter for Black Panther. Yes, the odds are stacked against this, but here’s why her designs for this movie are the most deserving win.

Carter did what we ask of historical costumers all the time: she created a complete world via clothing that helped tell the backstories and deepen our understanding of each character. She did this by meticulously researching and referencing authentic cultures and incorporating this into her work, while also extending and expanding on this information as the film required. Now, Sandy Powell did an excellent job of this in The Favourite, using 1710s details and refining them to tell a specific story. Heck, she did that in Mary Poppins Returns with 1930s fashions, giving simple Depression-era clothes a magical spin, plus creating historically-inspired clothes that fit into the animated sequences. But nothing compared with the scale and magnitude of world-building that Carter achieved in Black Panther this year.

And obviously, I’m not even going to dignify Mary Queen of Scots with any Oscar consideration. Y’all know my feelings about that piece of crap by now — check the archives! I can’t say much about Buster Scruggs, having only seen the trailer, but costume-wise, it’s a standard western. I presume it got nominated because insiders love its directors, the Coen Brothers, so much (also, the producer Netflix ran a hell of a PR campaign).

Back to Black Panther. The sheer amount of work that went into this movie’s costumes should earn Carter the award alone. The different tribes of the fictional world of Wakanda have their own distinct clothing styles that build on real-world African clothing and history as well as the comic-book storyline. For example, the Border Tribe in the movie paralleled the real Lesotho Tribe on the border of South Africa. Ruth E. Carter told Deadline:

“The Lesotho people of Africa are mountain dwellers; they are expert horsemen, they have cattle that they graze throughout the mountainous area, which gets rather cold, and they use these blankets to keep warm. They have these heart-shaped wool hats that they put over their heads, and also these rectangular straw hats that they wear for the intense sun.”

“They were expert horsemen, but also fierce fighters. Their blankets would be laced with vibranium, so they could not only cover their bodies from right to left, but they would also protect them in battle. Their blankets would hide their weapons, and also within the design elements and the parallel of the two tribes, we wanted them to have more of a folksy look to them, more of a countryman look, so that you could imagine them down by a fire with their horses, [receptive] to sounds and things that could be in natural environment.”

For the female military contingent, the Dora Milaje, Carter drew on colors and textiles worn by women of the Himba Tribe in northern Namibia. She said:

“Their leather back skirt is inspired by the Himba women, who stretch these hides and hammer metal into the hem. The craftspeople we had making the Dora back skirts took the leather hides, and I believe they used some kind of leather soap to soften it and stretch it. Then, we put rings and metal trinkets on the edges so that we could have the same decoration that the Himba women did to their skirts.”

And the mother of Wakanda, Queen Ramonda, wears Zulu garb (from the largest ethnic group in South Africa), but with a high-tech twist, as Carter describes in an ESPN interview:

“For the Queen, she was the from the Zulu tribe, so I wanted to pay homage to the Zulu women. Traditionally, married Zulu women wear the style of hats you see Ramonda wearing. We wanted to make sure that her crown was a perfectly symmetrical shape. It couldn’t be handmade, so we had to create it via computer, specifically 3D printing. I wanted to ensure she was the epitome of beauty, technology, and fashion — but in a regal way.”

All of this research and detail helps create the rich, realistic narrative of an Afro-futuristic promised land. I usually find comic-book/superhero movies boring (fighting and explosions, zzzzz), but I found Black Panther‘s story empowering and the visuals dazzling. The costumes were a huge part of that.

Historical costumes usually win Oscar awards because it’s easy to see the effort that went into the work, and it’s easy to see how that work is crucial to the storytelling in a film. Without accurate costumes in a period movie, viewers have a hard time immersing themselves into the period and fully experiencing the different time and place that the tale is supposed to be set in. This year, no film, including no historical film, did a better job of this immersion-via-costume than Black Panther. If the Academy doesn’t see that, well, they’re blind … or worse.

What are your thoughts on the Oscars?