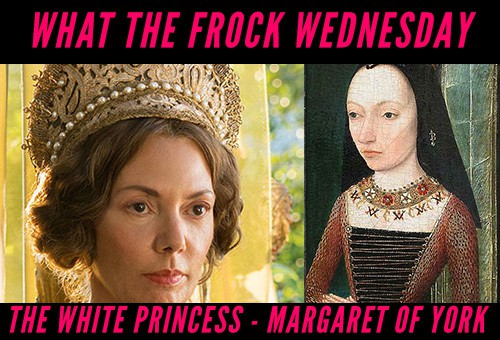 There’s been some back-channel talk at Frock Flicks HQ regarding The White Princess (2017) and just WHAT THE EVER LOVING FROCK ARE THEY WEARING??? We thought the days of shitty historical costuming had gone the way of The Tudors (2007-10), with the likes of The Borgias (2011-13), Outlander (2014-), and Wolf Hall (2015) raising the bar back up to an acceptable level of historical accuracy vs. pretty pretty princess. But sadly, The White Princess is a massive step in the wrong direction. Like, even Reign (2013-) doesn’t outrage me as much as the costumes in The White Princess, because at least with Reign they’re going for a specific sort of representational style (Reign’s costumer, after all, was a fashion stylist before coming to the show). With The White Princess, it’s like the sort of costuming you get when you allow a bunch of sugar-addled five-year-olds loose in a Goodwill and tell them to put together the most princess-y outfits they can with whatever they can find.

And nothing embodies this more than this costume worn by Margaret of York, Duchess of Burgundy, who BTW, wore clothes that looked like this: 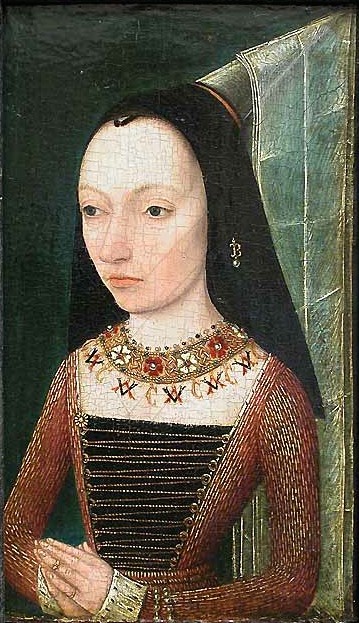 In the show, however… 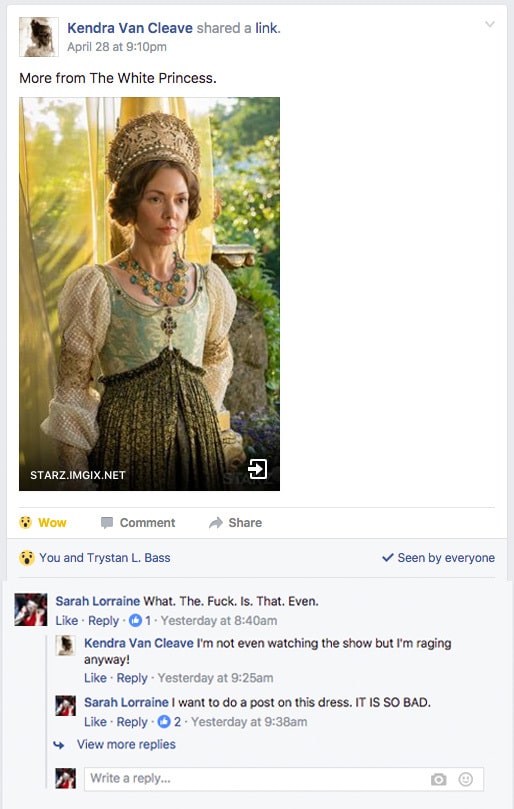 I can’t stop staring at it. It haunts my dreams. It is made up of my nightmares. I hate it with the heat of a thousand suns.

So, let’s start at the top. Very few things irritate me quite as much as the blinged-out sun visor that’s supposed to be a French Hood. Adding insult to injury is the fact that French Hoods are still a good 50 or so years in the future from 1485 or whatever bullshit year this bullshit show is set in.

Honestly, I would take a headband French Hood over this fugly monstrosity.

Moving down… The Bollywood CollectionTM necklace from Ye Olde Forever 21:

Wanna bet this will turn your neck green?

Now, let us address the sleeves. As in, what Gunne Sax dress from 1978 were these hacked off of?

But do note that the “bracers”, or whatever those arm things are, match the French Hood.

But the part that has me the most baffled is the combination of 17th-century boned bodice silhouette with what looks a hell of a lot like a shower curtain made of random quilting fabric, split up the center front to reveal a black jacquard underskirt. 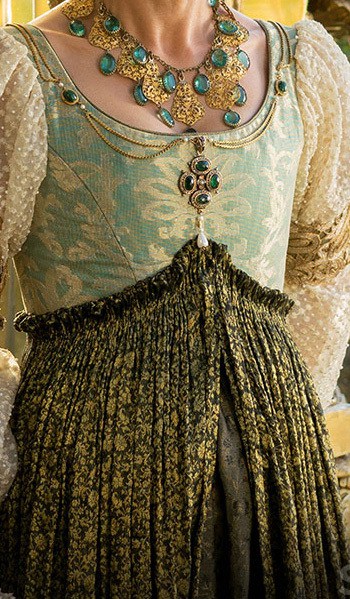 Or, as I like to say, “the darkness within.”

WHOSE IDEA WAS THIS??? Now, I usually am far more measured in my snark here, trying to avoid personal attacks, but honestly, this offends me on so many levels that it is taking everything I have not to convene a costume historian tribunal to prosecute the designer of this outfit for crimes against history. I haven’t been this offended by a costume since the Great Tudors Trash Bag Sacrifice of 2007. I don’t even care if this is being worn by Joanne Whalley, who is legit one of my favorite actresses ever. I would actually watch her wearing a trash bag, as a matter of fact, because she’s fabulous. But this thing??? I can’t.