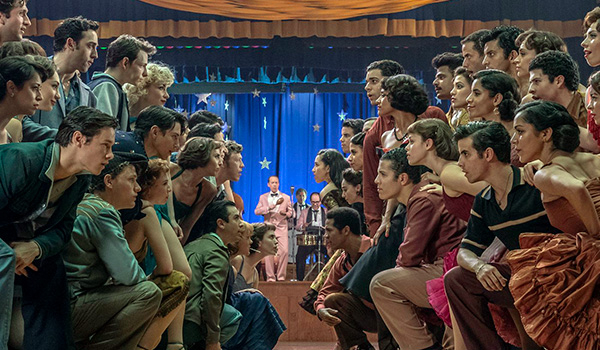 Since I recently reviewed the original, I had to watch the new West Side Story (2021) when it became available on HBO Max. There are, by now, countless reviews available, so I’ll focus as per our charter, on the costumes, but I have to say that, even though I usually hate remakes, this one was needed and not only does justice to the source material, I find it improves on it and fixes some of the problems with the original. This West Side Story feels more historically accurate, more grounded in the socio-economic background of New York City and the gangs and racial issues that this Romeo and Juliet tale is grafted onto. Yet it’s still a kick-ass musical with gorgeous dance numbers!

The historical accuracy is also seen in the 1950s costumes designed by Paul Tazewell. Director Steven Spielberg specifically sets this film in 1957, when the original Broadway show was set, and Tazwell wanted to avoid the the 1960s influence that crept into the first movie adaption. Tazewell explained in an Awards Radar interview:

“As a designer, when you’re thinking about designing clothes that are plausible and make sense and are as accurate as possible, you’re dipping into years before that potentially just to make sense of who these people are and their economic condition. So I was really focused on the early to mid ’50s in my designing.” 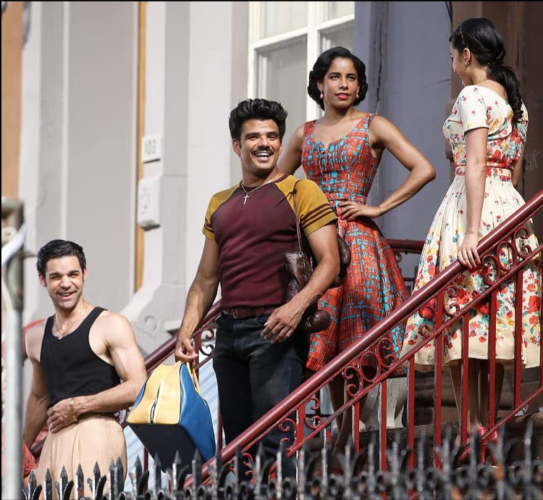 He took period sources and expanded on them to create a heightened world that works beautifully for this musical. In Harpers Bazaar, Tazewell said:

“My research was all about looking at images and photography, and specifically the photographs of Bruce Davidson — mostly black-and-white photographs of New York gangs that he embedded himself with in the 1950s. I had an opportunity to see what the clothes were, and really study what those pieces were and what was their fit, and what were they drawn to stylistically. I also looked at period catalogues, like Sears or Spiegel’s or Montgomery Ward.”

Tazewell made a point of showing how the Puerto Rican characters of the era dress distinctly from the white characters. Continuing in Harpers Bazaar, he said:

“I wanted to be respectful of the migrating Latinx community and how they were working to fit in at that time. They’re styled more formally because it’s aspirational. They’re dressing to attain their own self-respect and the respect of other people. I know that’s true for the Black American community as well — the importance of shined shoes and pressed shirts and leaving the house fully dressed.” 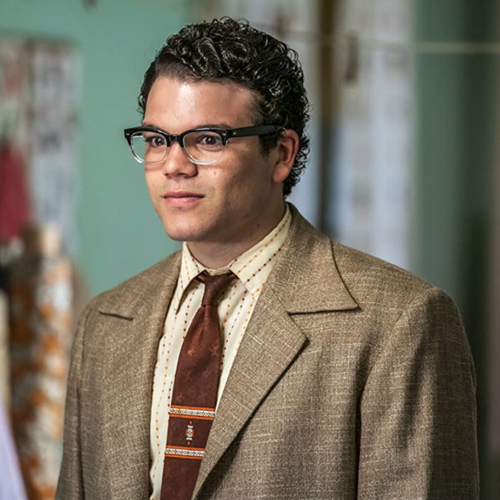 Chino (Josh Andrés Rivera) is held up as the model immigrant with a good job & prospects, even though he has a terrible ending.

As Tazewell continued in Harpers Bazaar:

“I wanted for the Sharks to be reflective of men that were holding jobs — though they definitely weren’t wealthy. They were dressing in the best that they had. They wore tailored pants and shoes that were broken in, but more of a dress type, as opposed to a sneaker. I was really trying to push them apart so that it was reflective of the community that they were coming from. Alongside that was the color palette — I kept the Sharks in a warmer color palette, which felt reminiscent of where they had come from and how they were re-creating themselves in New York.” 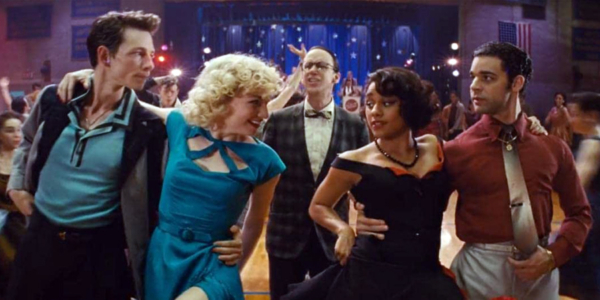 Leader of the Jets, Riff (Mike Faist) with Graziella (Paloma Garcia-Lee), vs. leader of the Sharks, Bernardo (David Alvarez), Anita (Ariana DeBose) at the dance. 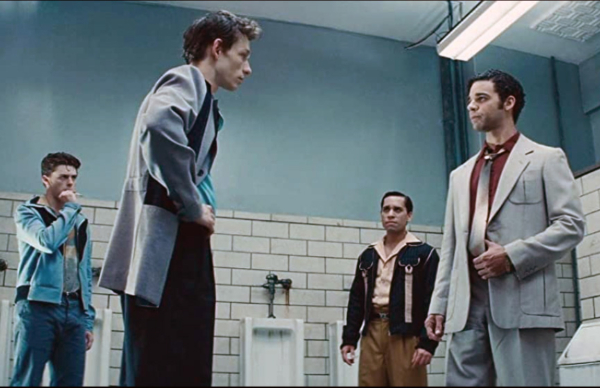 In the gym’s mens room, they arrange for a rumble the next night. Bernardo looks much more formally dressed than Riff.

This is most noticeable during the dance at the high school gym. The Sharks men are mostly wearing suits or jackets with ties, while the Jets men are wearing open-collar shirts. The Puerto Rican are more dressed up for the same event. Tazewell said in Harpers Bazaar:

“That’s in contrast to the look of the Jets, who were coming from broken homes and really struggling. There’s also a certain casualness and comfort in being an American and being in New York City — the Jets are the only gang that I put in blue denim, because it’s an icon of America. I felt that that was very important to connect to them.”

Certain costume themes did carry through from the 1961 movie, however. In an interview with Below the Line, Tazewell noted:

“There were only two instances where [Spielberg] specifically requested certain designs. One was the white dress that Maria wears at the dance at the gym — he wanted that as a nod to the original. Smartly so, [as] it reflects her innocence at the beginning. It was also the cultural connection to the Church and her Catholic upbringing. The second was that Bernardo be in a red shirt for the prologue, the first time we see him. Part of that, design-wise, was to set the tone for how I was going to imagine these two gangs.” 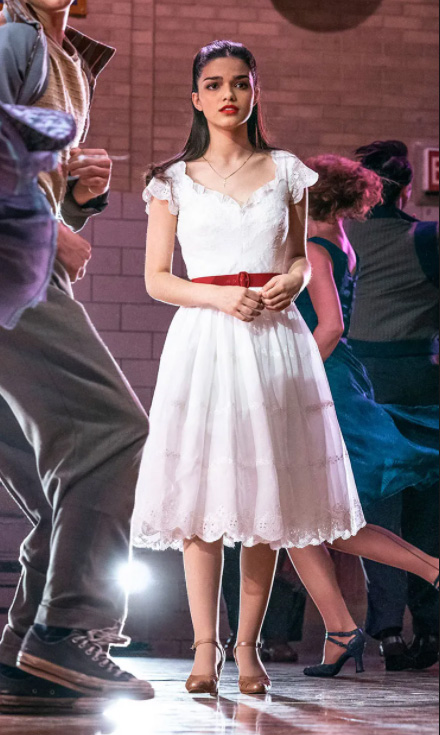 That white dress was made of a custom-embroidered fabric, which Tazewell described in Vanity Fair:

“There weren’t a lot of choices out there that would fill the bill for all of it. And I wanted a certain amount of sheerness, so that you could see the petticoat through it because I knew that it was going to be backlit. So, it creates this ghostly figure—she kind of glows when she’s lit from behind.” 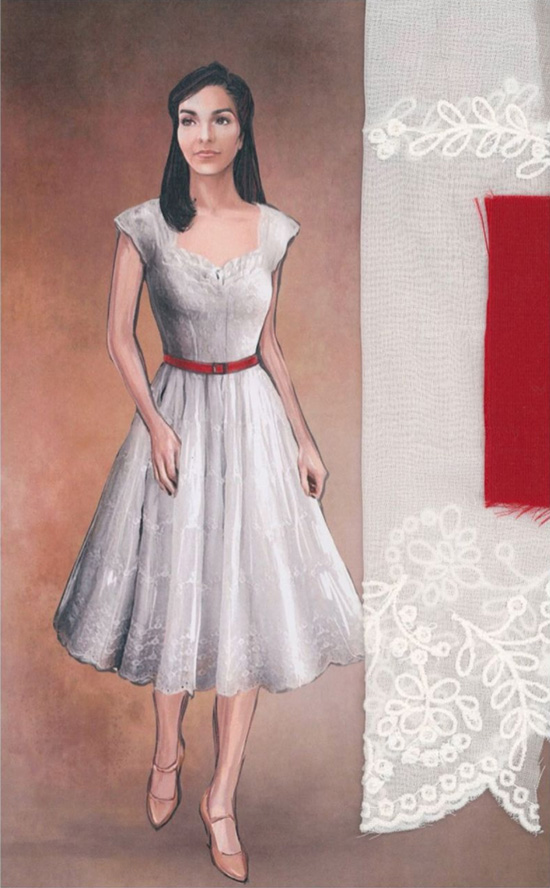 Costume sketch & fabrics from Paul Tazewell’s Instagram, where he has TONS of info about the West Side Story costumes!

There’s a progression in Maria’s costumes, that Tazewell describes in Harpers Bazaar:

“When we see Maria go on her date with Tony, the second outfit looks like a blouse she could have brought over from Puerto Rico. It’s reflective of a traditional peasant blouse and has hand stitching that’s lovingly done, similar to something that her mother or grandmother might’ve made in Puerto Rico. But then, pairing that with a slim skirt makes it seem as if she’s trying to appear more mature and moving away from the white dress that is keeping her in the box. And then, when she adds a little red cardigan, she comes off as a very intelligent Latin woman who has her own mind — and is not afraid of expressing it.” 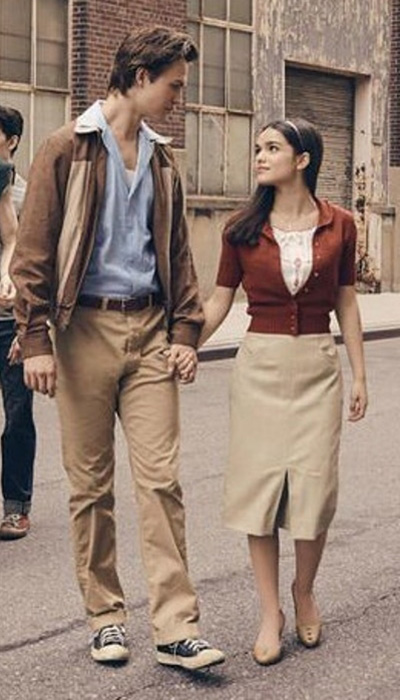 Her style is maturing. But look at Tony (Ansel Elgort) wearing sneakers, which the Puerto Rican men wouldn’t do. 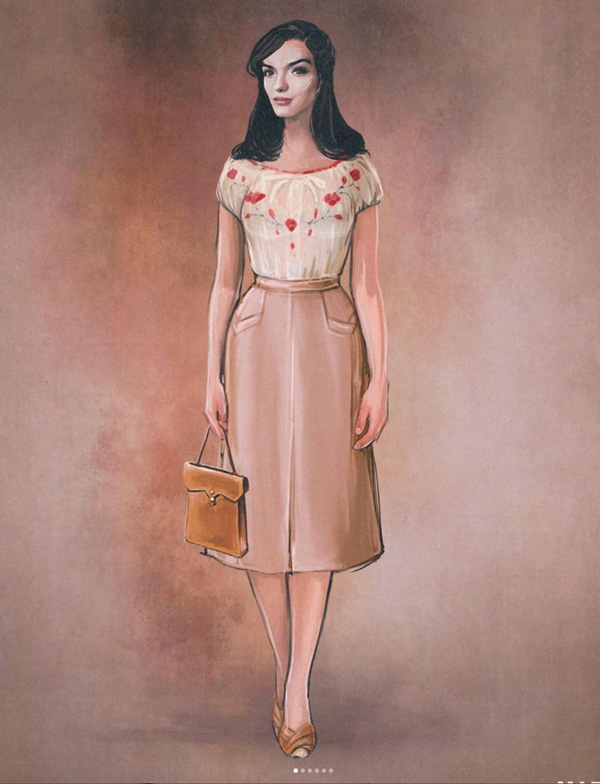 Paul Tazewell’s design for the blouse. 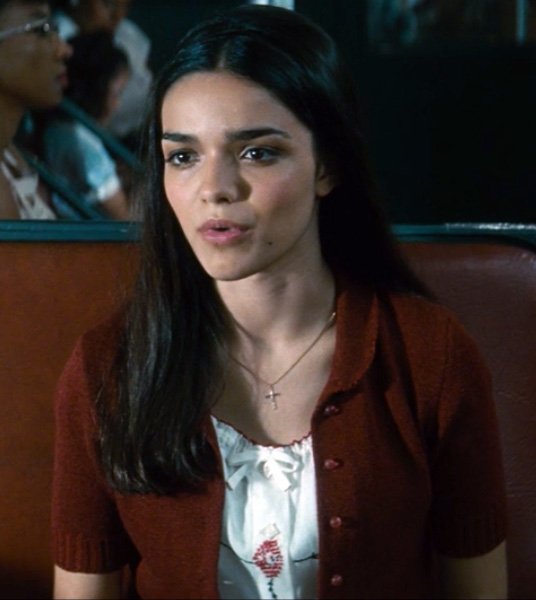 A glimpse of the blouse in the scene.

Another standout character is Anita (Ariana DeBose) with her brilliant yellow dress during the “America” song and dance number. In the 1961 movie, this number came after the high-school dance and took place on a rooftop; for this movie, it’s an exuberant piece that takes over the streets of the city. Anita is still the focus, which that dress helps magnify. Tazewell said:

“I really wanted Anita to be like the sun — to be the center of that community and hold that kind of energy and exuberance that was then reflective of the rest of the neighborhood.” 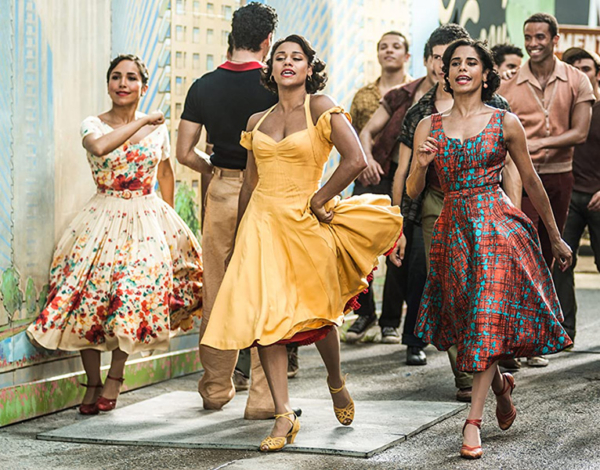 In Below the Line, Tazewell elaborated on why he used this yellow and all the other bright colors on the dancers in this number:

“The idea was to evoke the happiness of moving to America, of recreating your life, the aspiration of that. This is all vs. the cooler, more controlled, or even depressive quality in the Jets, the broken homes they were coming from, and what was influencing how they viewed this new community of a different race coming into their territory.” 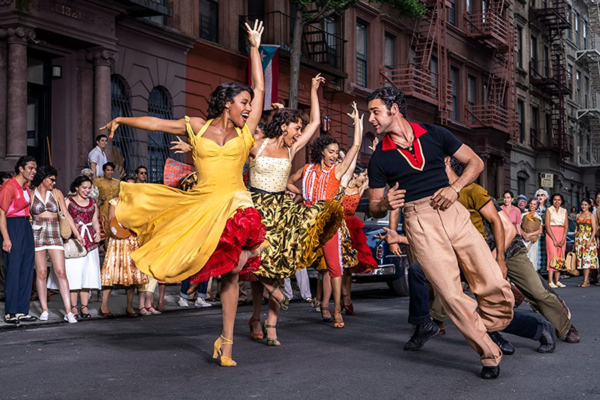 I dare you not to smile during this scene! 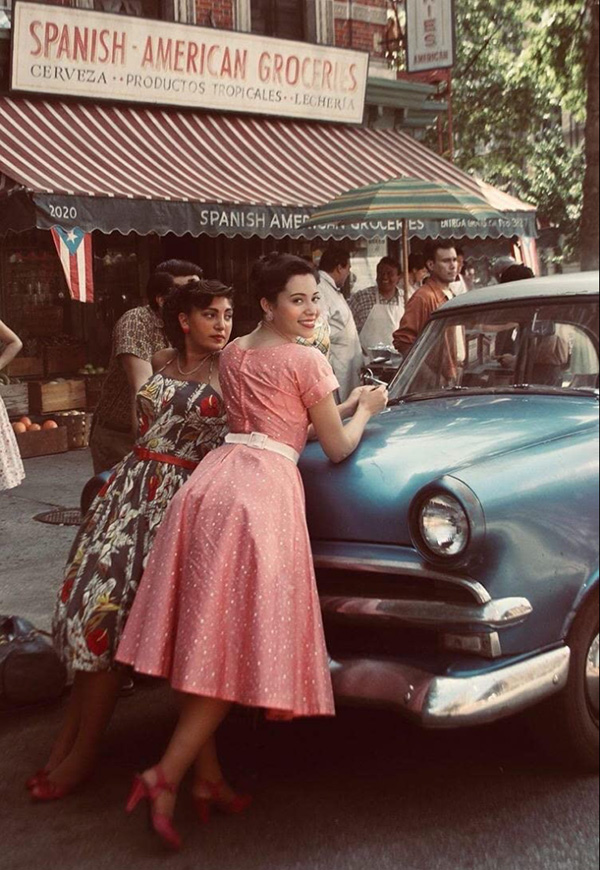 Great outfits in the background too.

The costumes are the cherry on top of this delicious sundae of a movie musical. There are excellent performances by all the singers and dancers, including a significant part for Rita Moreno — the original Anita from 1961 takes over the “Doc” type role, and yes, it works. There’s a little reordering of some songs, which I found made more sense to the story, but overall, it’s pretty faithful to the original book. With more historical context, and that’s a good thing.

Have you seen the new West Side Story? How do you think it compares to the 1961 version?