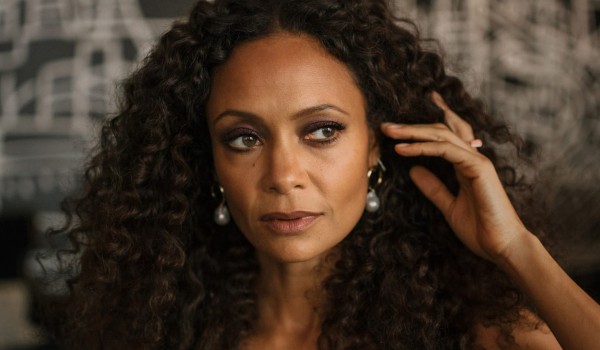 The reason why we picked British actress Thandie Newton for the focus of today’s Woman Crush Wednesday actually has some layers to it. First of all, we’re all fans of Ms. Newton here at Frock Flicks HQ, and as such, we would like to celebrate her contributions to historical film and television. Secondly, she is a woman of color, who has been outspoken on the topic of being a woman of color in Hollywood. This is timely, obviously, because of the absolute shitshow that is white America’s understanding of systemic racism, and therefore, I will simply use Ms. Newton’s own words throughout this piece. And finally, you will notice that there is not a lot of costume content listed below. Why is that? Well, Ms. Newton sums it up in the Sunday Times:

“I can’t work, because I can’t do Downton Abbey, can’t be in Victoria, can’t be in Call the Midwife — well, I could, but I don’t want to play someone who’s being racially abused. I’m not interested in that, don’t want to do it … there just seems to be a desire for stuff about the royal family, stuff from the past, which is understandable, but it just makes it slim pickings for people of colour.” “I was involved in a relationship which really relied on my insecurity, so that I wouldn’t ever think, ‘What the fuck am I doing with an old bloke?’ And that insecurity was fueled all the time. ‘It must be because you’re black.’ Seriously. ‘Don’t worry about it because I’m here to …’ Bollocks! ‘It’s because I’m 18 and you’re 41. Everyone’s looking at us because this sucks. And I’m thinking they’re looking at us because I’m black.’ Isn’t that fucking awful?” “I believe wholeheartedly that she did have Jefferson’s children, and there was never any thought in my mind that that was fabricated. I wouldn’t have been involved in the filmmaking if I believed that. It’s very coldhearted that people feel so ashamed that Jefferson would have had this relationship. It’s difficult, you get into these racist attitudes — the Jeffersonians say, ‘This is disgusting, how can you mar him like this?’ Are they saying that it’s so wrong for him to have a relationship with a black woman? Or that this is a man who wrote the Declaration of Independence, who wrote, ‘All men are created equal,’ and yet he kept slaves?“ “In order to do justice to a role like this, you have to go all the way. Playing Beloved meant that day after day, I had to expose so much of myself in a way that was sometimes undignified, deeply unflattering and even viciously cruel. You have to use your own resources, and discover what you potentially can be capable of.”

The Interrogation of Leo and Lisa (2006)

“I was ready to quit because I was very frustrated with how women are portrayed on screen. Very often these movies were written by men. I’d kind of had enough. I’m older. Life’s too short.” “So I look at [Olanna, her character in Half of a Yellow Sun] and want to absorb the sense of place that she has, which I’ve kind of never been entitled to, I guess, growing up in England. A lot of ignorance and confusion, not from me, but in perception. Can I be British if I am black? It’s a thing!“ “My decision to play this role was a result of conversations we had about what they wanted to create with the show, the provocative material, which was going to be a conversation about what it means to be humane, what defines life, and do you value that life. Those are all questions that I’ve been asking myself for a very, very long time. My social activism, my activism for women’s rights, which takes up a huge proportion of my time, but wasn’t my day job. So suddenly my day job was going to be turned into telling those stories and potentially go on for a number of years, I was like, ‘Count me the fuck in.‘”

What’s your favorite of Thandie Newton’s historical film and TV roles? How much of a bad-ass is she?