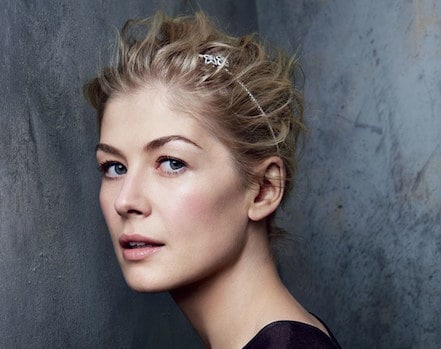 Is there anyone with more perfect features than Rosamund Pike? Possibly, but only slightly. Also, super talented actress in both period and modern-set films. She’s done more than just Jane in Pride & Prejudice, so let’s do the thing, shall we?

She’s the daughter of the hoity toity aristocratic family, who has a smart head on her shoulders and Gets Shit Done. 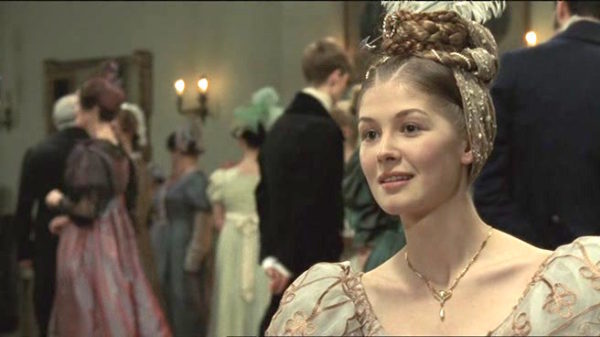 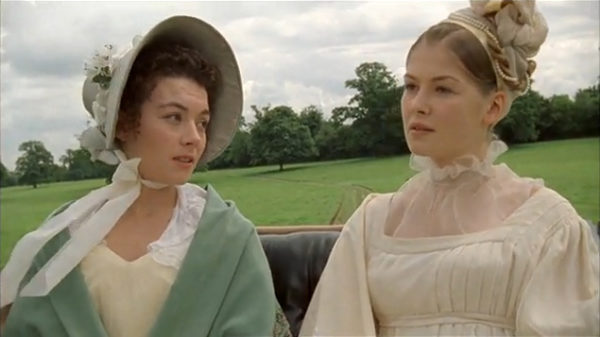 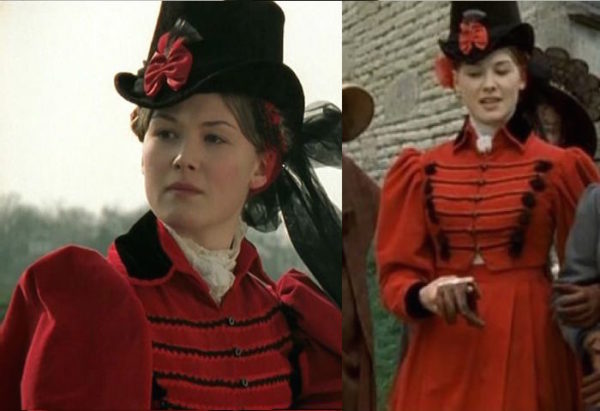 But you can’t go wrong with a good riding habit! 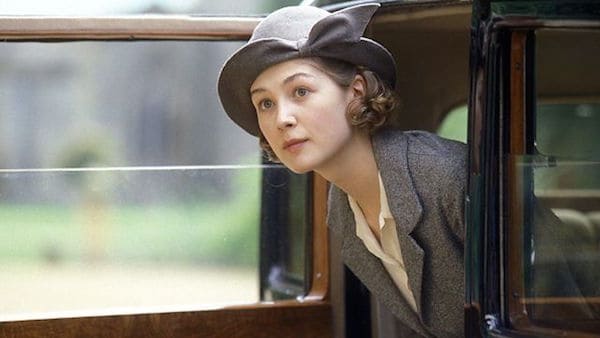 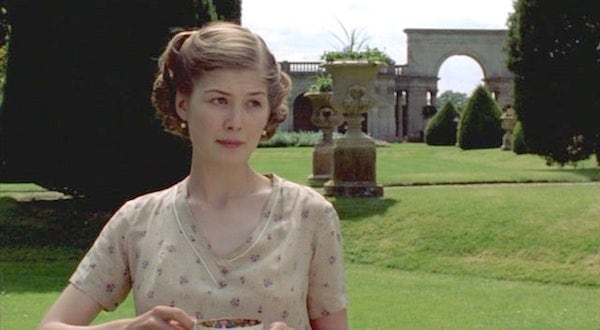 The sweet hair and printed dress perfectly suit her character.

In one episode (“The German Woman”) of this 1940s-set detective series. 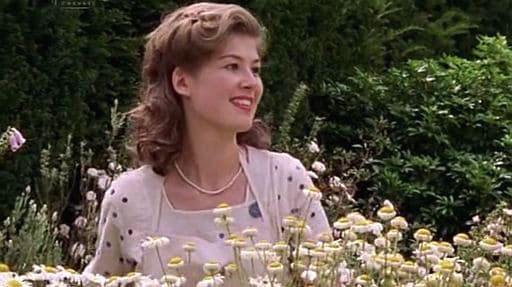 As the overlooked wife of Johnny Depp’s seriously fucked up John Wilmot, second Earl of Rochester, the titular libertine (and, woo boy, was he). 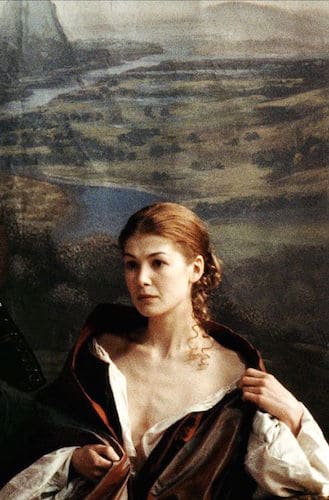 Posing for a portrait with her hubby. 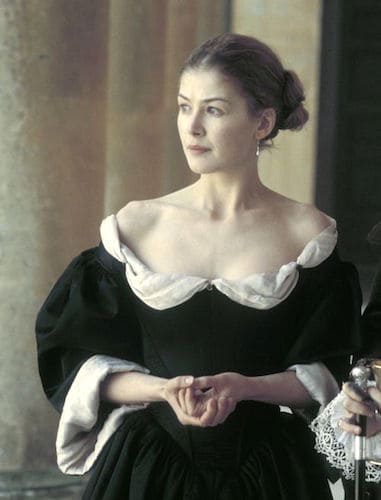 Nice dress, dialing it in on the hair. 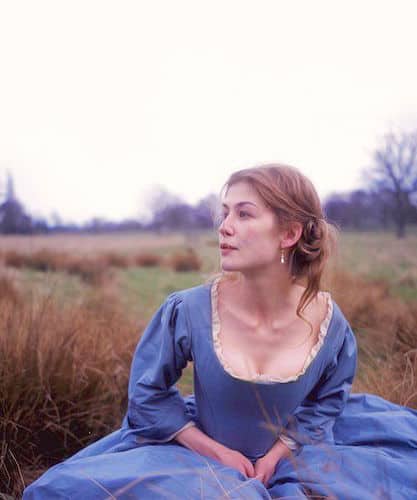 As older sister Jane Bennett in the Jane Austen adaptation featuring far too many pigs. Pike was good though! 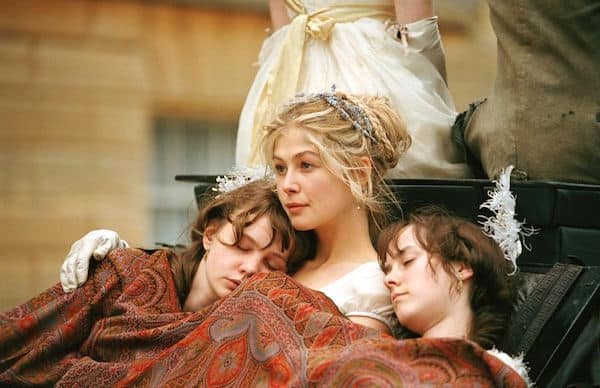 My kingdom for a comb! 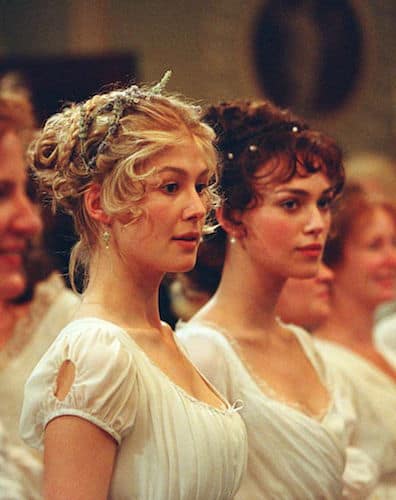 Hey, at least she’s doing (serious) wisps instead of bangs! 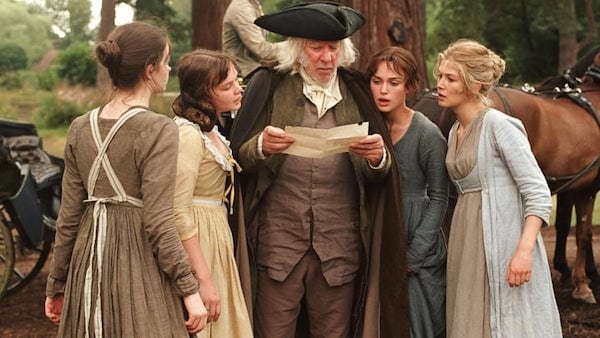 “Dear Bennett girls: homespun is no longer in style.”

As the girlfriend of a mid-30s man who is trying to seduce a teenage girl in England in the 1960s; she’s the older, sophisticated character to Carey Mulligan’s ingenue. 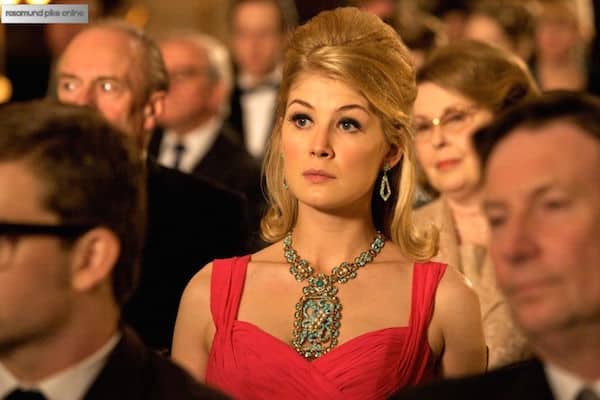 I do loves me a good bouffant, and that’s some great jewelry! 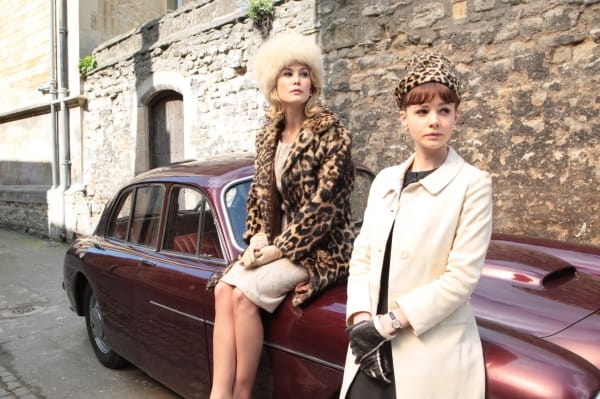 Tied together through leopard print!

A cute film about a 1968 labor strike led by women in England; Pike has a supporting role (can’t quite remember, she’s maybe a secretary? Boss’s wife?). 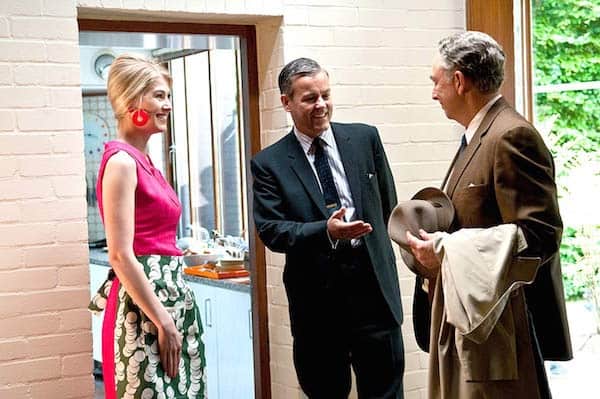 An adaptation of a D.H. Lawrence novel that underwhelmed me. Pike plays Gudrun, the arty sister to Rachael Stirling’s Ursula. 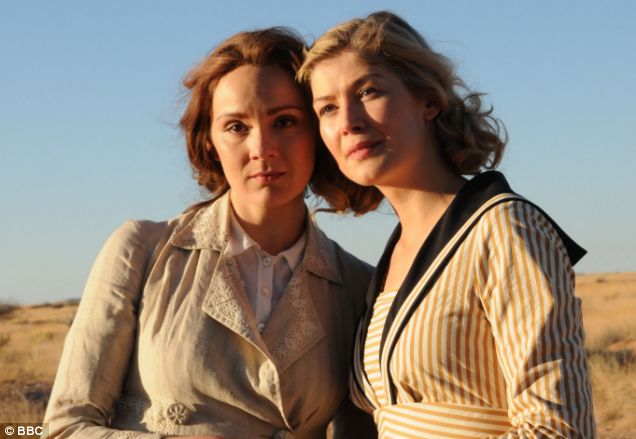 I love stripes, and I love a sailor collar! 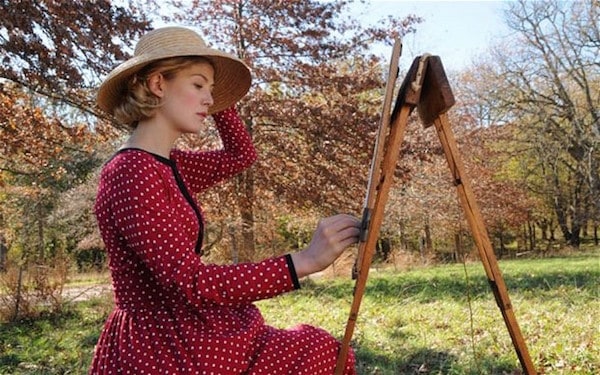 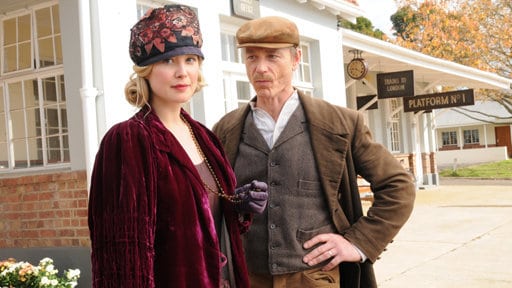 As Ruth Williams Khama, an Englishwoman who married the heir to the throne of Bechuanaland (later Botswana), Seretse Khama (played by David Oyelowo). 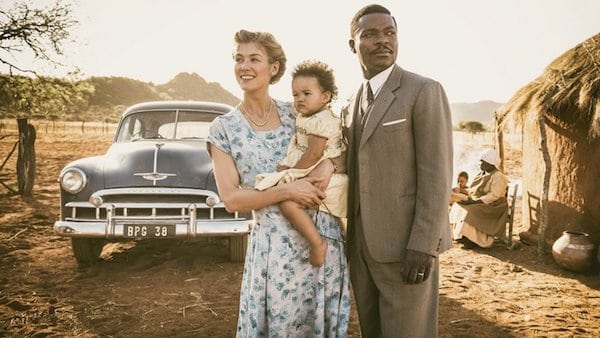 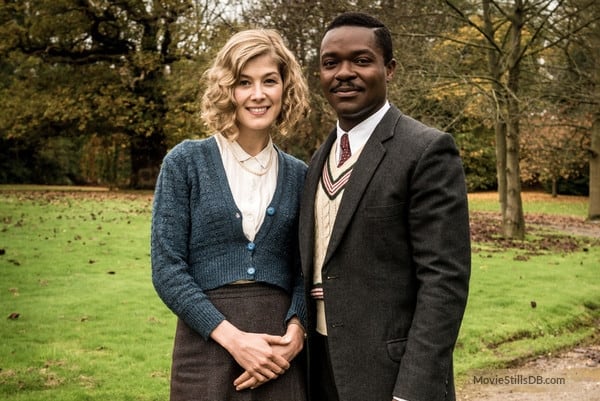 As the wife of Nazi leader Reinhard Heydrich, who was assassinated in Prague during World War II. I’ve been on a WWII kick lately, so I may try to track this down! 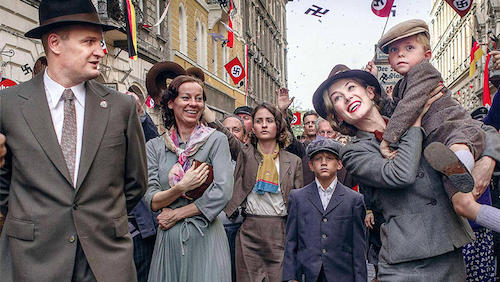 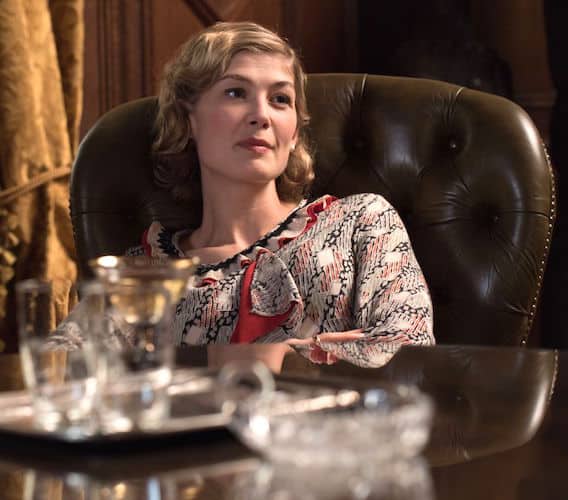 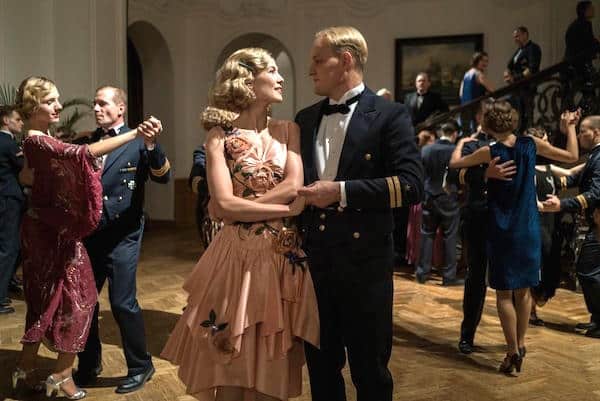 As an 1890s settler whose family is attacked by Comanche Indians, who then hitches up with soldiers escorting a Cheyenne war chief home. A very, very, very mixed bag. 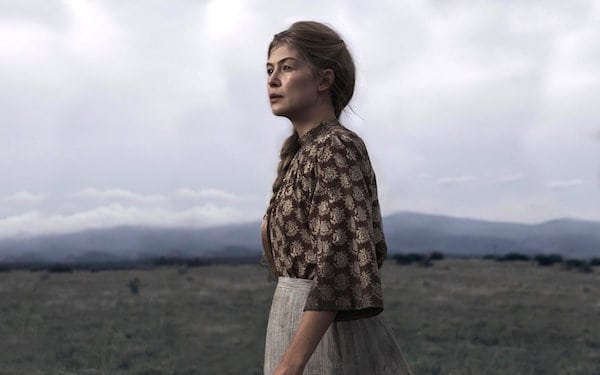 Ain’t much to look at, costume-wise. 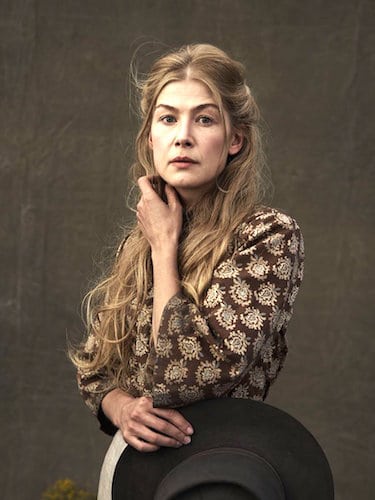 Hence why I’m not a western fan.

Pike will play Marie Curie in this biopic, but sadly there’s no photos yet!