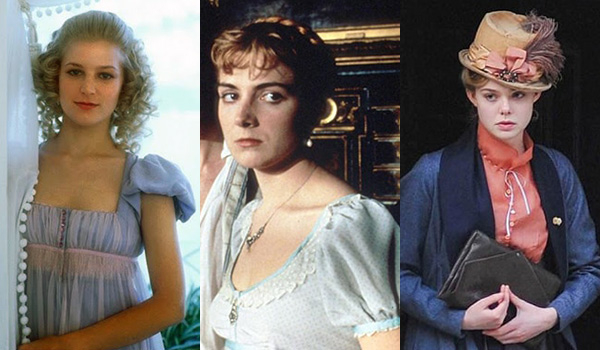 Mary Wollstonecraft Godwin Shelley (August 30, 1797 – February 1, 1851) is one of those few authors who’ve turned up in frock flicks as themselves, as well as having frock flicks made of their works. But I don’t think she’s gotten a really solid biopic — most movies focus on the writing of Frankenstein, which, sure, is what she’s famous for, but there’s a lot more to explore. Raised in a tumultuous and politically radical family, Mary then fell passionately in love with poet Percy Bysshe Shelley. Their relationship was even more turbulent, and Mary gave birth to four children, only one of which survived infancy. After 8 years together, Shelley died, and Mary spent the next two decades of her life editing and publishing her husband’s works and writing more of her own fiction, plus articles and reviews. This woman had a full life worth exploring on screen, and I’d like to see a bit more than these excerpts. Elsa Lanchester in Bride of Frankenstein (1935)

The movie sequel to Mary Shelley’s novel is introduced by the author (even though she didn’t write this story). Lanchester also plays the iconic bride in this film. That’s quite a gown for sitting & stitching by the fire. Ken Russell directed, so it’s banana-crackers. This was Natasha Richardson’s feature film debut, and she did an admirable job with the admittedly weird material. Lizzy McInnerny in Rowing with the Wind (1988)

A very silly film with cheap costumes, but the best part is towards the end when Mary tells off Lord Byron (Hugh Grant) for being a pretentious git. Later on, she yells at him & his bad hair.

Better costumes (by Gabriella Pescucci!) with a more teen romance take on the summer of 1816 at Lake Geneva. A modern horror flick where a mad scientist goes back to 1816 Lake Geneva to meet Mary Shelley and the poets. Um, whatever. Though why did we get so many blonde Mary Shelleys? Lake Geneva is a brief episode in Byron’s life, but at least a decent actress plays Mary (even if she gets a dull dress, as Kendra says). She’s only in the first few episodes of the first season — y’know, to put the “Frankenstein” in “The Frankenstein Chronicles” — but this is the kind of using real people in fictional stories that I find entertaining fun. Also, I love watching Anna Maxwell Martin, she’s good in everything! Because I’m a completist and I like my history drunk! This biopic isn’t as bad as all that, but does the biopic thing of trying to tell too much of her story. What it got right was Mary’s youth and the fly-by-night quality of her and Shelley’s relationship. The costumes do range from tragic to just OK though. In the series last season, they went broad, literary, and expanded from outside U.S. history. Lili Miller in “The Haunting of Villa Diodati,” Doctor Who (2020)

Of course, the Doctor takes her companions to visit Lake Geneva in 1816 — I’m only surprised it took this long! Who’s your favorite onscreen version of Mary Shelley? Do you want to see more?

Leave a Reply to Cheryl from Maryland Cancel reply