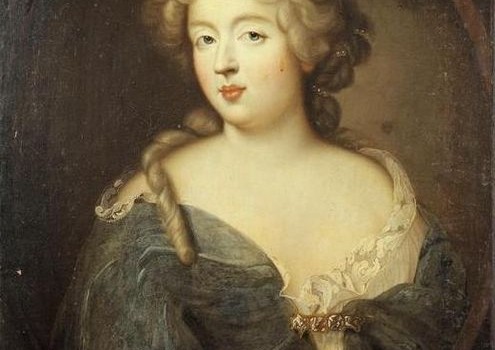 Françoise-Athénaïs de Rochechouart de Mortemart, Marquise of Montespan was the most glamorous of King Louis XIV’s many mistresses and his official maitresse en titre for a number of years. She was noble herself and married with two children when she caught Louis’s eye. She was with the king from about 1666 to 1691 and the two had seven children together (it’s from this line that the cadet house of Orléans descends). Her downfall was the legendary “affair of the poisons” — in which a number of courtiers, including Montespan herself, were accused of poisoning a number of other courtiers. Montespan was exiled and ended her life well cared for in a convent.

We could still TOTALLY use a good biopic about Montespan, but she has been on screen a number of times:

Played by Claudette Colbert in this collection of vignettes set at the palace of Versailles. A French film about the affair of the poisons. She was played by Danielle Darrieux (the elderly Madame de Rosemonde from Dangerous Liaisons! Okay and many many French movies). Played by Estella Blain and bouffanted up in this sequel to Angélique Marquise des Anges. So much polyester curtain fabric! I like how the bows give her a Nellie Olsen touch.

A French TV movie, with Dominique Blanchar as an older Montespan. Sarah loved her character (played by Valentine Varela) in this story of her successor, Madame de Maintenon. Apparently she (Marine Delterme) has a small role in this, but I blocked it out because I hate Gerard Depardieu that much. Don’t panic, this is a behind-the-scenes shot. Okay, so this was a musical theater production, but I am totally amused by the Bollywood costuming so needed to include it. That’s Lysa Ansaldi as Montespan. Jennifer Ehle as Montespan — and her gaposis — was probably my favorite thing about this film! As someone who only made it through the first few episodes of this TV series, I am constantly getting photos of Montespan (Anna Brewster) confused with the queen. Ha, she was in the The Tudors! Still crossing my fingers that The Marquis gets made! Ohpleaseohplease!