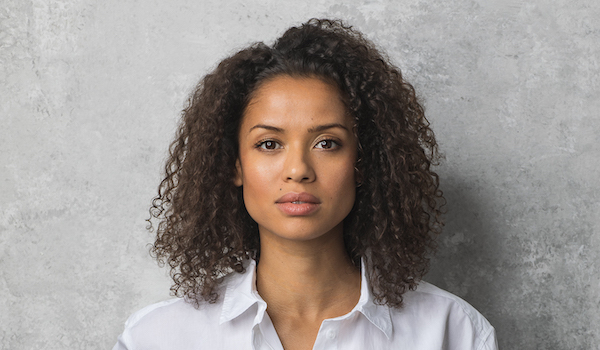 British actress Gugu Mbatha-Raw has done a number of period flicks, from one of her early roles as an 18th-century aristocratic woman in Belle to the upcoming biopic of British-Jamaican nursing pioneer Mary Seacole in Seacole. I thought that, and of course her talent and range, made her the perfect candidate for a Woman Crush Wednesday!

One episode of the Agatha Christie, 1950s-set murder mystery series. 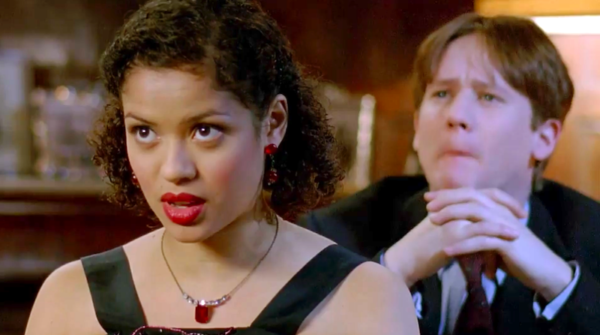 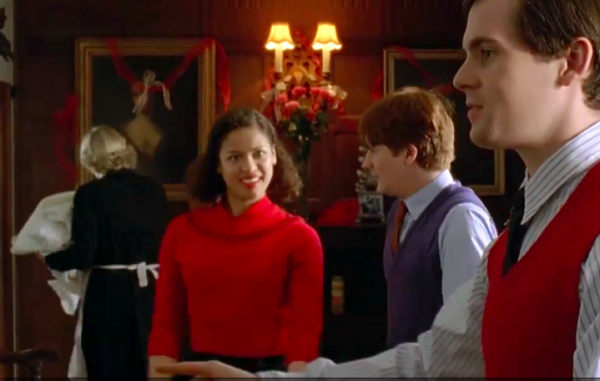 Apparently that’s a theme here! Must be Christmas? Valentine’s Day?

As Dido Elizabeth Belle, a real-life woman of color who was raised by her aristocratic English family and who was both inside and yet outside of that family. 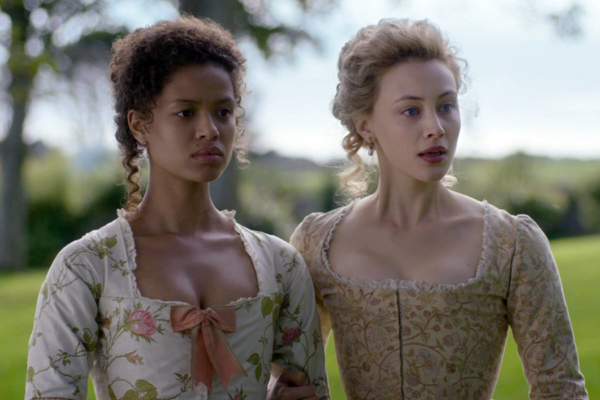 Nice floral prints for the period. 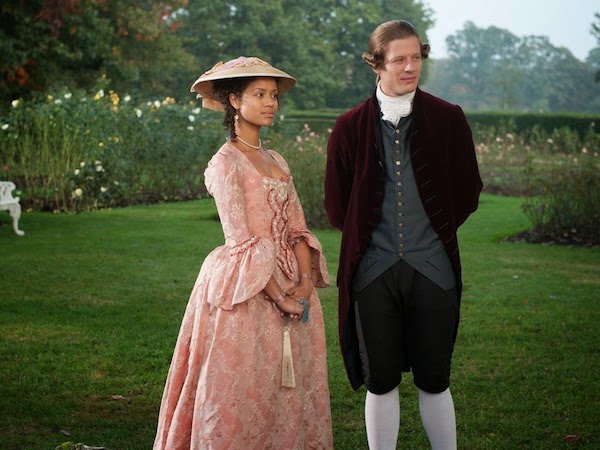 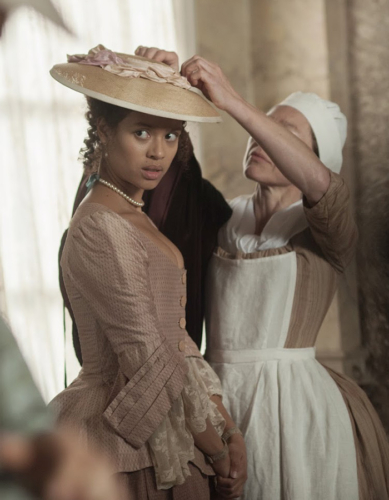 Ooo the texture on that jacket is great, even if the cuffs are super dated for the period. 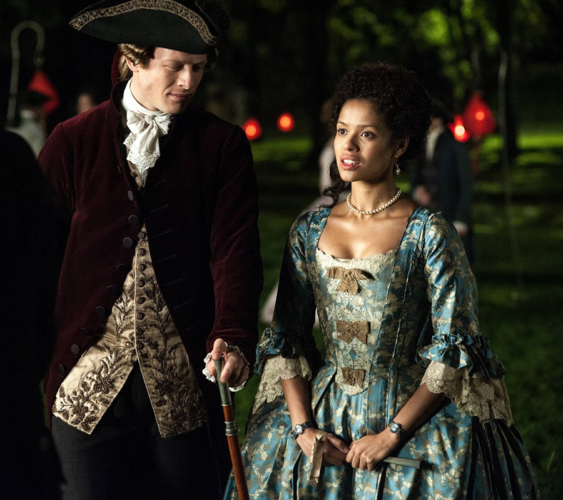 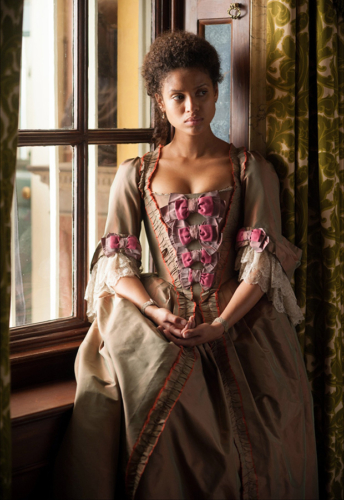 Beautiful use of color. 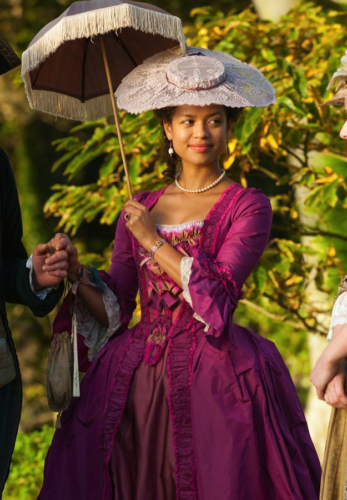 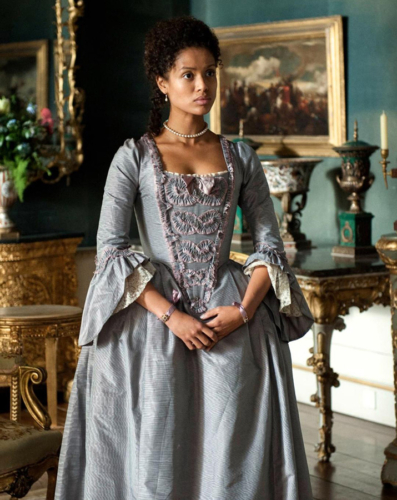 I love the edging on the ruched trim.

Based on a true story, about Newton Knight, a Mississippi man who led an armed revolt against the Confederacy during the American Civil War. Mbatha-Raw plays the real-life Rachel, an enslaved woman who becomes his wife. 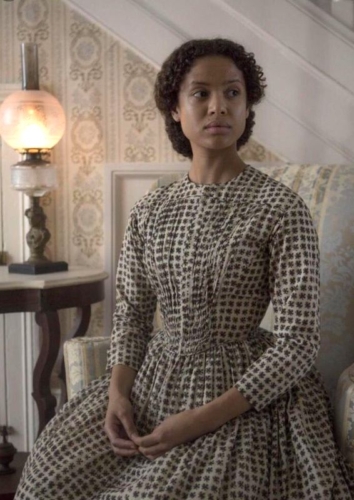 That’s very lovely and accurate to the period. 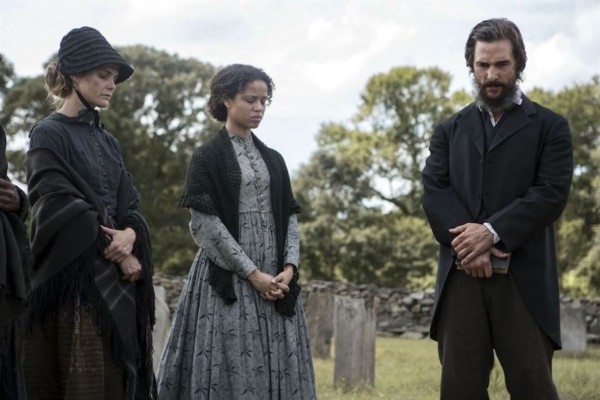 Not a fan of Keri Russell’s bonnet, but then I’m not a bonnet fan! Mbatha-Raw’s dress is simple, but up-to-date with its round waistline.

She plays Plumette, a maid who is transformed into a feather duster, in the live-action, 18th-century-ish adaptation. 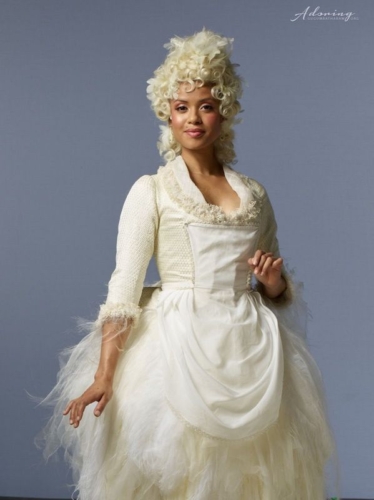 I’m guessing the skirt is supposed to look like feathers? 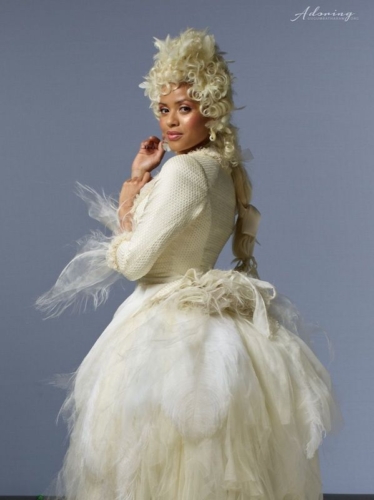 And in the hair too! That short and curly front, long in back is very 1780s. 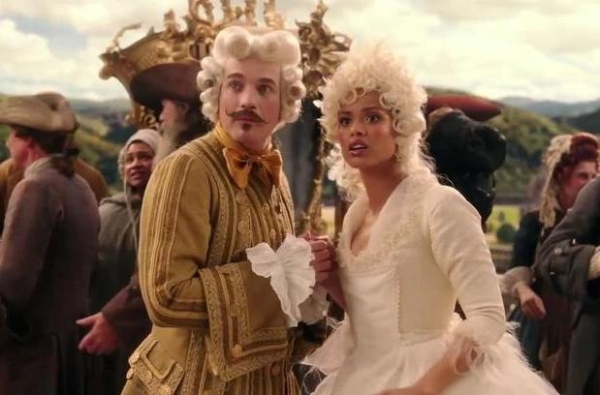 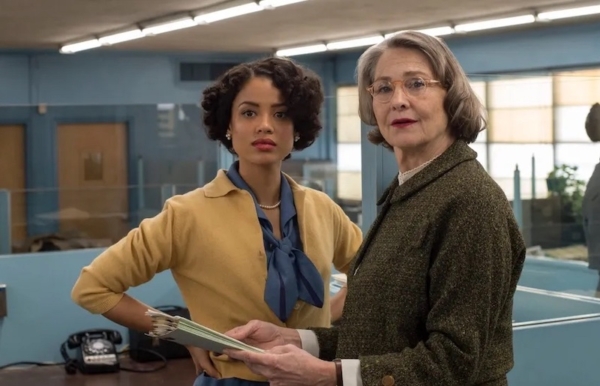 That hairstyle is perfect! And the colors are great on her. 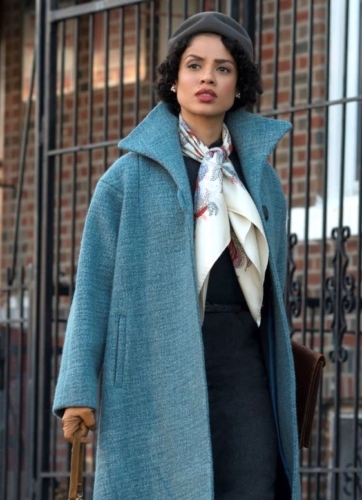 Now THAT is a swing coat! 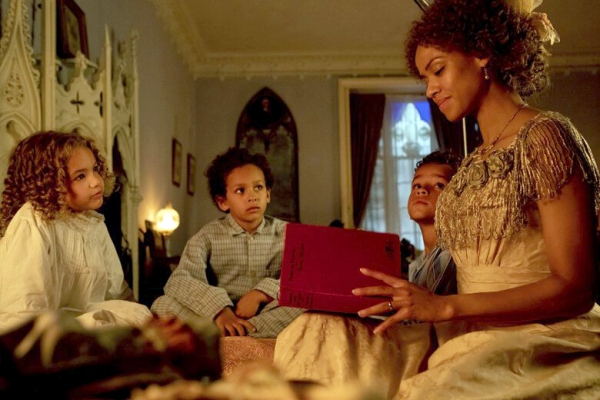 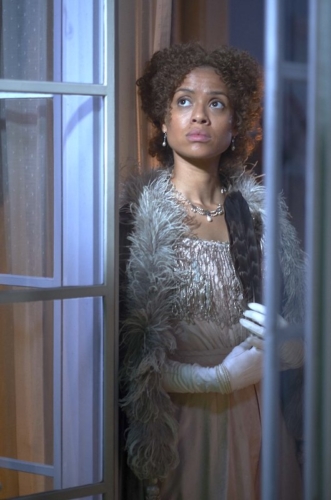 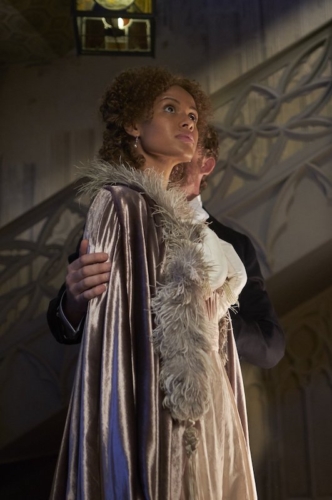 VERY emphasized boobs! Or is that just something being puffy? I don’t know. I see boobs!

Technically a little late for us, but Mbatha-Raw is SO good in this I had to include it! She plays the real-life Miss Grenada who competed in the 1970 Miss World competition, while British feminists protest. 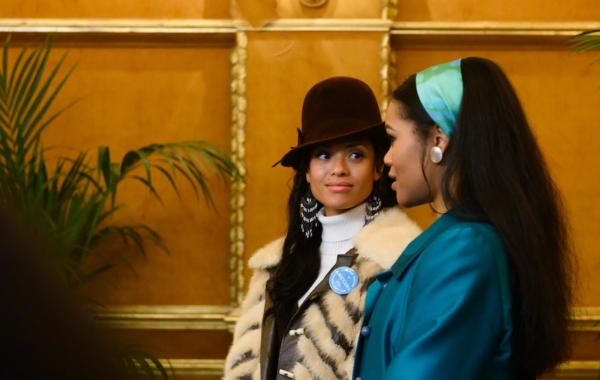 Her wardrobe is surprisingly fab! 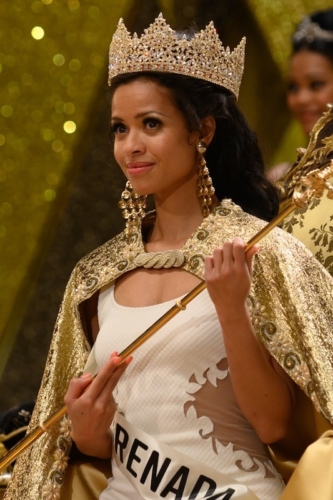 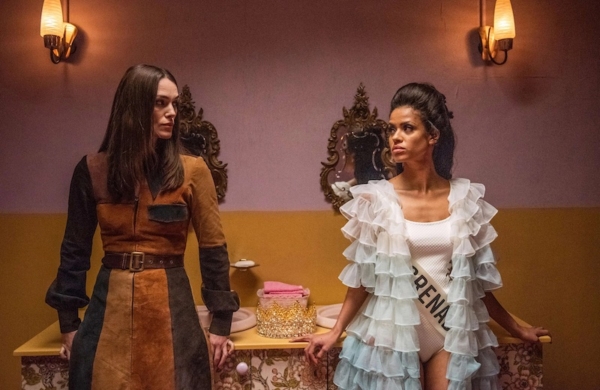 Contrasting with one of the feminists (played by Keira Knightley).

A reclusive writer is forced to take in a refugee boy during World War II. In part of the story, she flashes back to her relationship with with Vera (Mbatha-Raw) while at university. 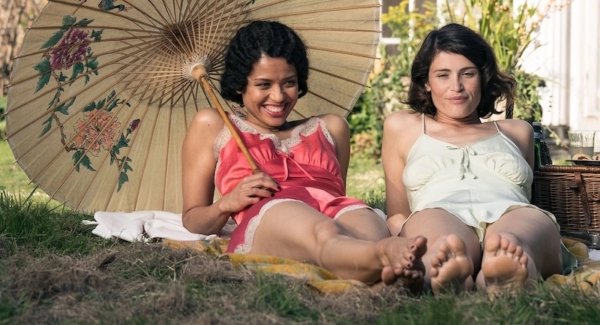 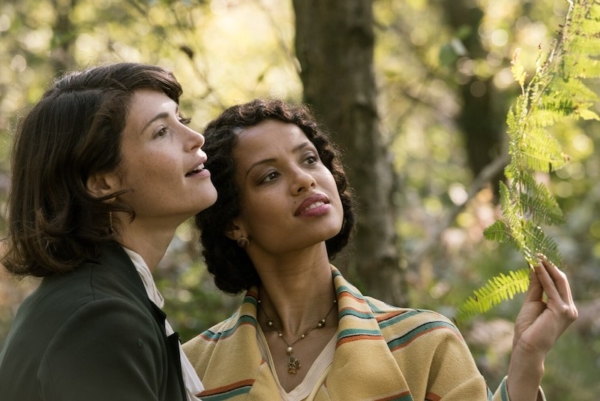 Love her hairstyle and that stripe! 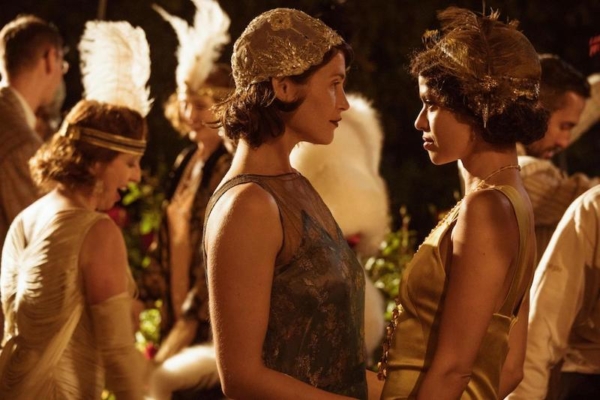 She’ll be playing the real-life Mary Seacole, a British-Jamaican nurse during the Crimean War (1853-56). 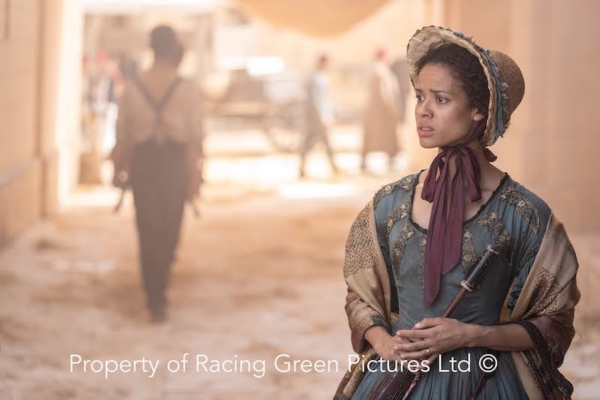 I’m not loving the low neckline and those appliques, but it doesn’t help that I don’t much like this period. I’m guessing the short sleeves are for practicality? They DID have short-sleeved gowns for hot weather, and this looks hot.

Which of Gugu Mbatha-Raw’s historical roles is your fave?