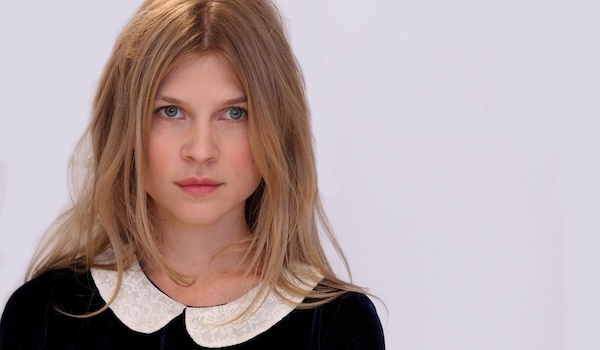 You may know French actress/model Clémence Poesy as Fleur Delacour in the Harry Potter series, but she’s done a number of historical films and TV shows. She’ll soon be joining Claire Danes and Tom Hiddleston for a spooky late Victorian mini-series (The Essex Serpent), so let’s look at her frock flick resume!

In her first English-language role, Poesy played an actually French-accented Mary Queen of Scots, but sadly that was the only positive in this awful, awful miniseries. Her hair is up, even if it’s not a terribly 16th century style! Which Simplicity pattern was this? My favorite! The Backpack Dress! I believe she’s a teenager, so I’m okay with the hair half-down. Irritating me as the original historic manic pixie dream girl, Natasha, in this TV miniseries adaptation of the Russian Napoleonic Wars-set novel. Who makes bad decisions, like the fabric for that dress (although I do like all the angled pleats)! As Joan of Arc, baby! This film focuses on her capture and execution. Looks like the kind of padded garment worn under armor? (I know nothing about armor!)

A soldier in World War I flashes back to his affair with a young, married woman (Poesy). I was super bored by this, but I still like Poesy in general! This is very nicely done! Love all the applique. As Isabella of Valois, Queen of England, in this Shakespeare adaptation. Okay, now THIS I love, but I don’t know enough about medieval to know if it’s correct. I think this is supposed to be a houppelande? Wikipedia tells me this is what a houppelande should look like | Maria d’Harcourt et d’Aumale, wife of Reinald IV, Duke of Guelders and Jülich, in a houppelande, fol 19 of the Breviary of Marie de Gueldres by Master of Mary of Guelders, working in Nijmegen, c. 1415, Berlin State Library I think that’s a chaperone headdress? And another houppelande? Assuming they are putting the rest of her hair up, I LOVE the Princess Leia buns! More of that gown. This season focused on artist Pablo Picasso. Poesy played French painter Françoise Gilot, who had a long romantic relationship (and children) with Picasso. This seems to be the 1940s (National Geographic/Dusan Martincek) Okay, those are cute trousers!

A TV miniseries based on a novel. Per Wikipedia: “Set in the Victorian era, in the year 1893, it tells the tale of Cora Seaborne, a woman relishing her recent freedom from an abusive husband, who moves from London to a small village in Essex and becomes intrigued by the idea that it might be haunted by a mythological sea serpent.” Poesy plays Stella, whom the main character befriends.