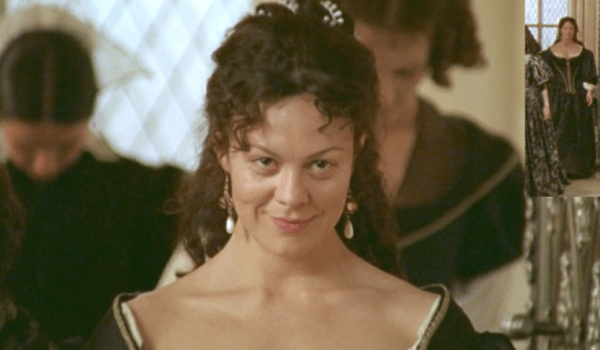 Our last rundown of some of our favorite bitches in historical costume flicks elicited some good suggestions, so I decided we needed a redux on this theme. Because everybody loves a bad girl!

I initially thought Helen McCrory was a weird casting choice for the role of Charles II’s chief mistress, Barbara Villiers. The role starts when she’s about 19-years-old and McCrory was, well, considerably older than that. But once the character matured into the domineering “queen in all but name” of Charles’ court, the choice to cast McCrory was a good one. I will cop to the fact that I’ve never actually seen I, Claudius. But in Part 1 of this series, the overwhelming response for not including Livia meant I had to make amends. So, here she is. This entry could fill an entire series of posts dedicated solely to the nearly endless snark that seemed to drop from Maggie Smith’s lips in every scene she’s in.

Don’t let the sweet face fool you. Mrs. Quigley is not afraid to cut anyone who stands in the way of her ambitions. A substantial part of my enjoyment of the show is watching Quigley and Margret Wells go toe to toe in the battle for harlot supremacy. The money behind Mr. Selfridge’s success, Lady Mae can either be your greatest ally, or your worst enemy. Or possibly both. Stay tuned for the next installment!