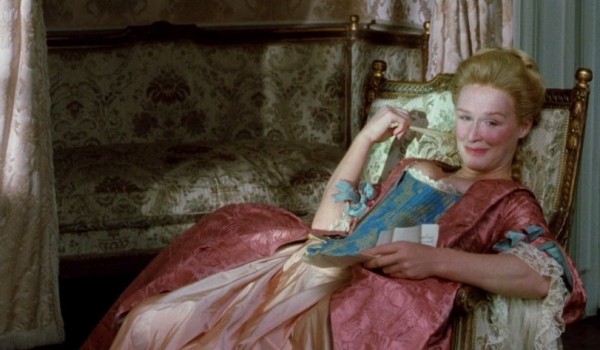 Today, we celebrate the bad girls, the bitches, the snark queens, and the mean girls of historical costume flicks.

Barbara Leigh-Hunt’s portrayal of Lady Catherine de Bourgh is hands-down my favorite. From her wide-eyed incredulity that screams “I can’t even with this bitch,” every time she looks at Elizabeth Bennet, to the expert way her pleasant smile morphs into a look of seething disdain, she manages to avoid being too cartoony or too straight-up bitchy. It’s subtle bitchiness at its finest.

No one under the age of 35 is allowed to have an opinion in this house!

This look says it all.

Next up, we have Glenn Close’s contribution to the Mount Olympus of Bitchdom, with the Marquise de Merteuil, the Queen B of all 18th-century frock flicks. She won’t even wait until your back is turned to stab you, she’ll just plunge the knife in while staring you in the face.

Glenn Close did an admirable job in the role of one of the most badass queens in Western history, in the 2003 remake, but Katherine Hepburn‘s Eleanor is THE Definitive Eleanor as far as I’m concerned. She’s snarky, scathing, and looks fabulous in a wimple — three things I like in a woman.

Eleanor, charter member of the “I Don’t Care if it’s Period, I Just Want My Tits Out” club.

They clearly take after their father.

Vivien Leigh defined the role of the young, beautiful, immature spoiled brat who shockingly is still somehow likable even if you know that in real life, you’d want to shank that bitch five minutes after meeting her.

Miranda Richardson’s Queenie is delightfully evil. Her one joy in life is tormenting Edmund Blackadder and watching him freak-the-eff out, all while trying to suck up to her and edge Lord Melchett out of her favor.

You think Ludmilla, the wicked stepmother, was the worst of the bunch? You clearly haven’t run into Marguerite, the eldest stepsister (played by Megan Dodds), who gives her mother a run for her money in the bitch department. Like Lady Catherine de Bourgh, it’s not necessarily the bitchiness that comes out of her mouth at every opportunity, but the tiny expressions of pure loathing that do it for me.

I have been trying to perfect this look since the movie came out.

Want to fight me on which Lady Catherine de Bourgh was better, Barbara Leigh-Hunt or Judi Dench? Bring it in the comments!