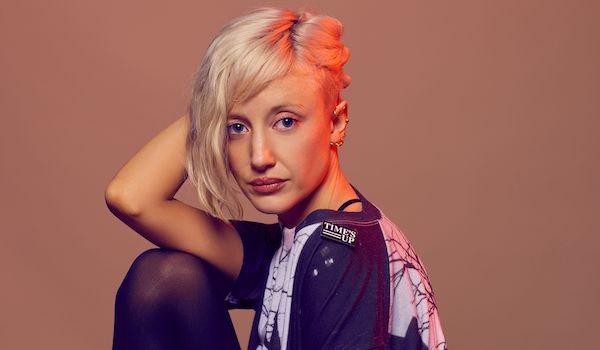 Andrea Riseborough is an English actress who is very talented, and has that slightly buggy-eyed (very attractive!) look that makes her perfect for 1920s-30s films. I always enjoy watching her for her acting skills and her beauty, so let’s admire her in the hopes she’ll make some more frock flicks!

As a far-too-pretty Margaret Thatcher in this TV miniseries about Thatcher’s early years. 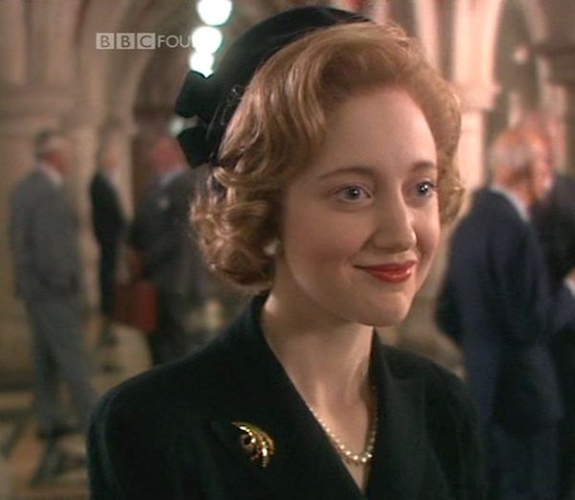 See? Her eyes totally remind me of the Mitford sisters! 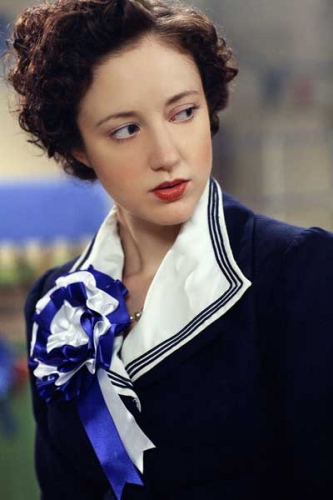 You can never go wrong with dark-color-and-black — here it’s navy. 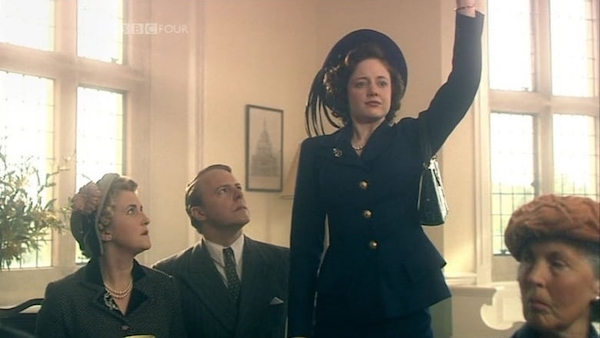 As a fictional courtier whose life is upended by the English Civil War. 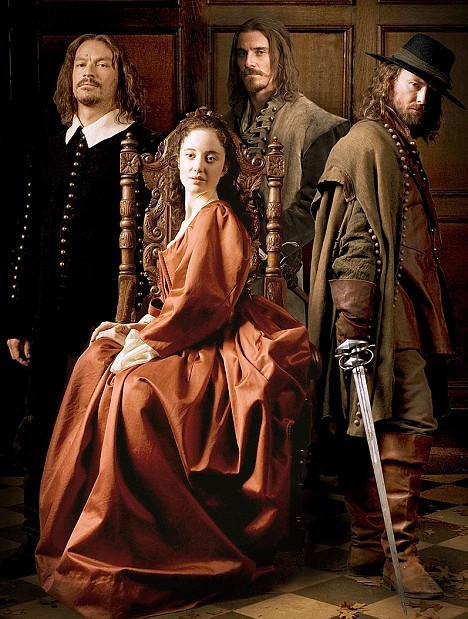 She’s pivotal to all the boys. 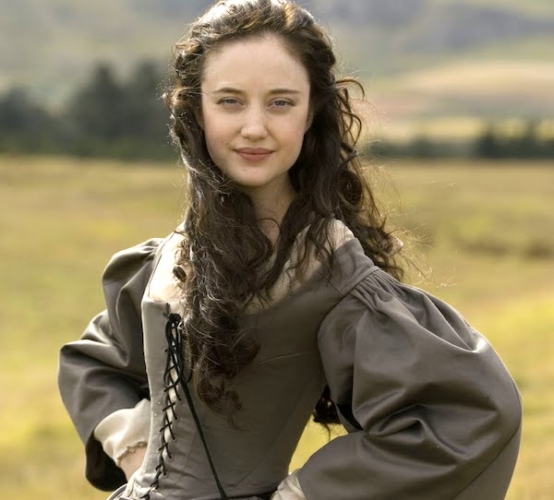 She looks great with dark hair, even if she’s potentially grommety. 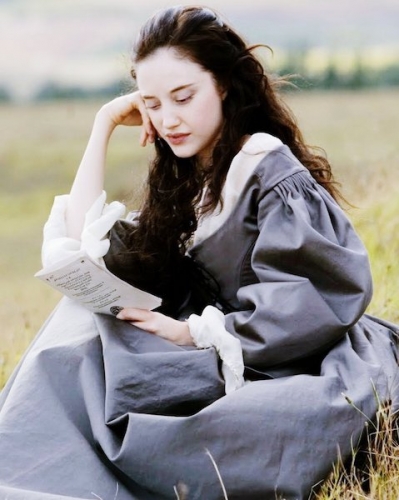 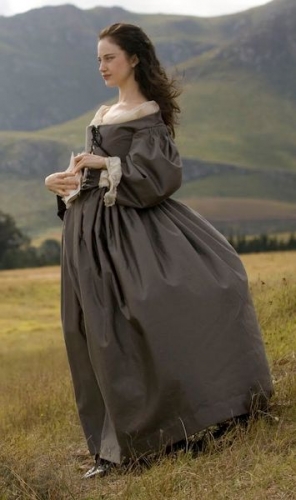 I have raved before about this wedding dress. 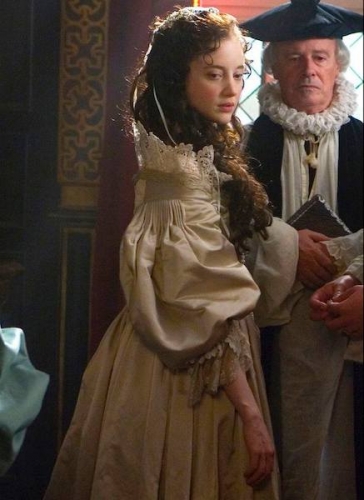 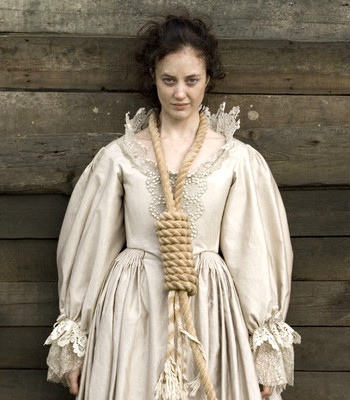 Even when things don’t go so well, always be well dressed. 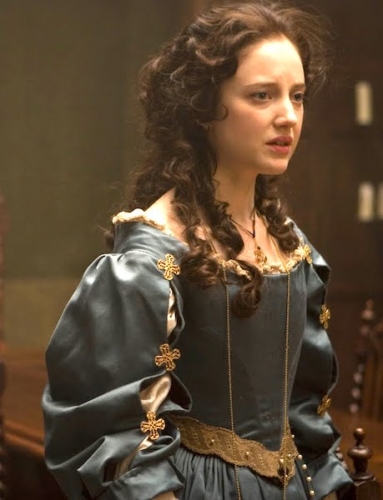 An inspiring film about the 1968 Ford sewing machinists strike. 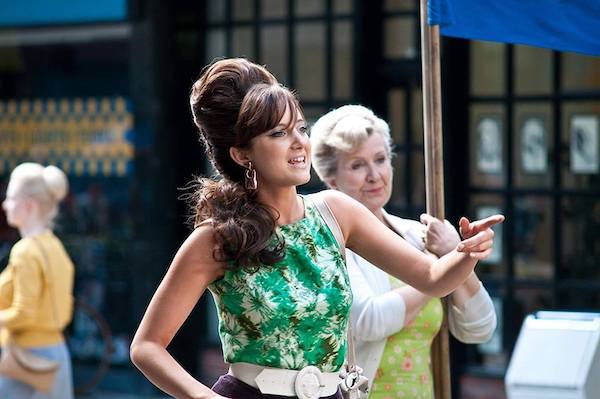 ALL MY HAIR GOALS

An alternate reality where the Germans have invaded and occupied Britain during World War II. I feel like I tried to watch this and didn’t care? Maybe? Or was that another alternate-reality take on WWII? 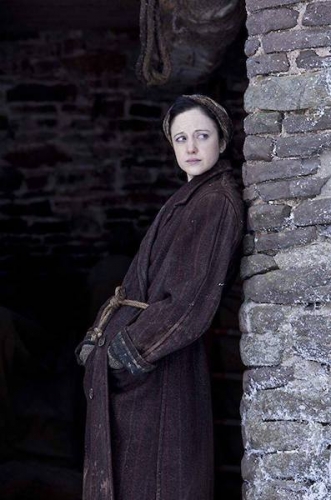 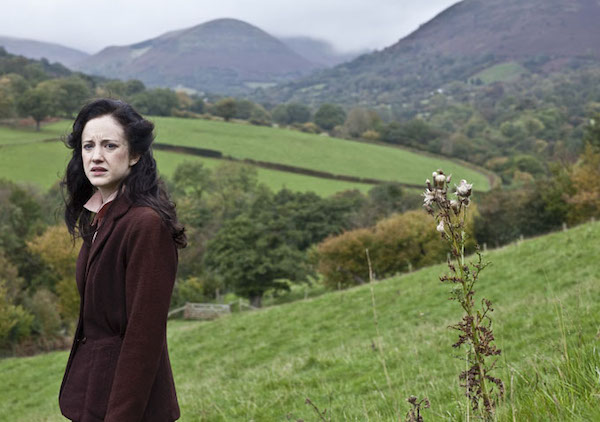 Not having any fun.

The Madonna-directed film that is half Wallis Simpson and King Edward VIII in JAW DROPPING STUNNING COSTUMES by Arianne Phillips, and half a modern woman who is obsessed with the couple. They should have just stuck with the period stuff, as the modern story just doesn’t work. 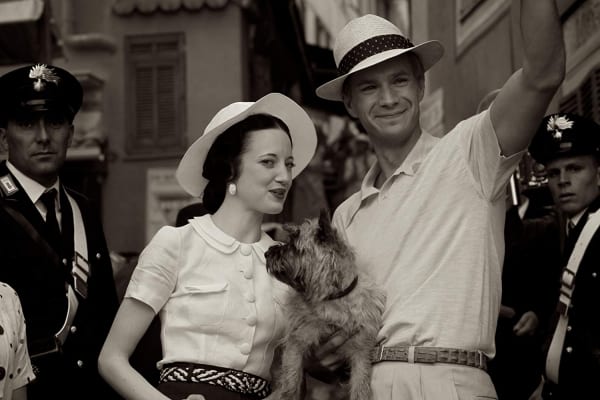 Okay, so Riseborough is too beautiful to play Simpson, who was always elegantly and chicly dressed but not “pretty.” 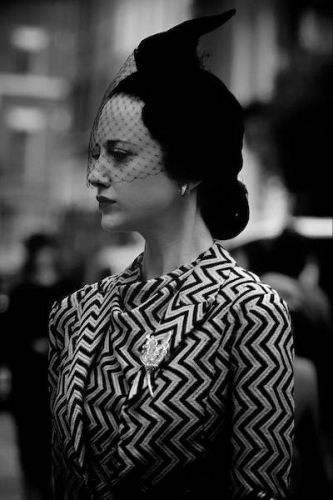 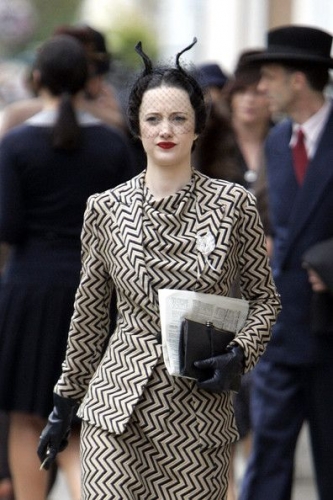 I love the zig-zags paired with the antennae hat! 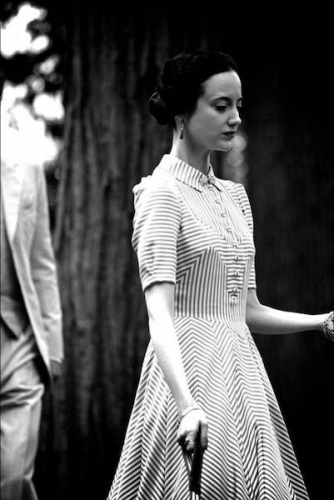 The pattern matching on this IS TO DIE FOR. 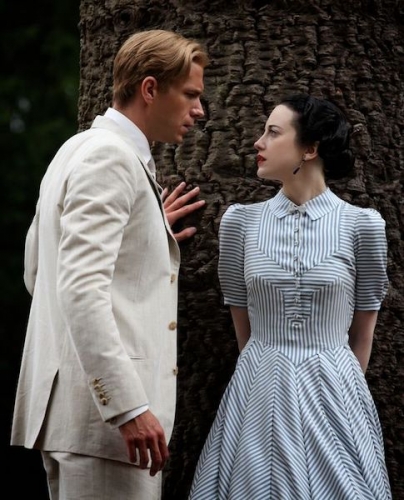 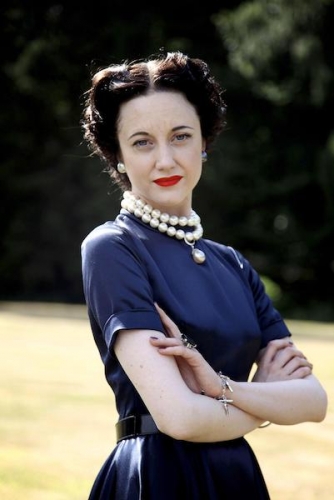 The Witness for the Prosecution (2016)

As the titular witness, testifying against her husband who has been accused of murder, in this 1930s-set Agatha Christie adaptation. 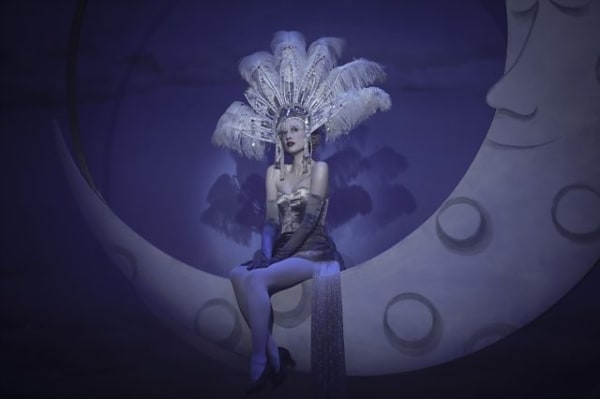 She’s a beautiful but melancholy showgirl. 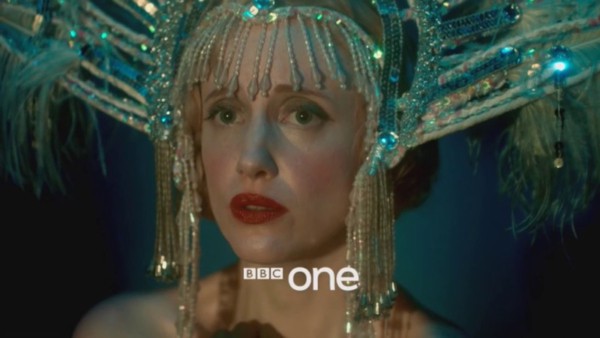 She SO SUITS THIS ERA! 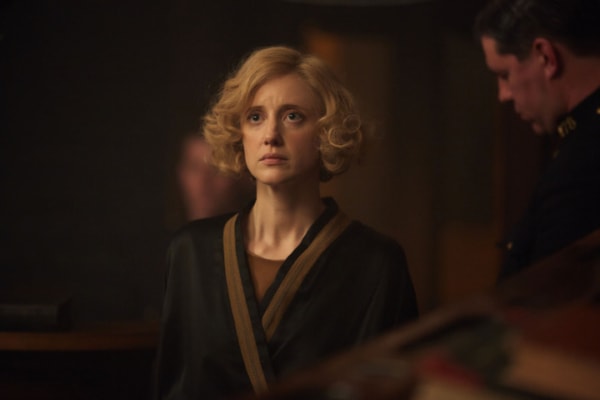 As “Marilyn Barnett” in this film about the real-life 1973 tennis match between Billie Jean King and Bobby Riggs. 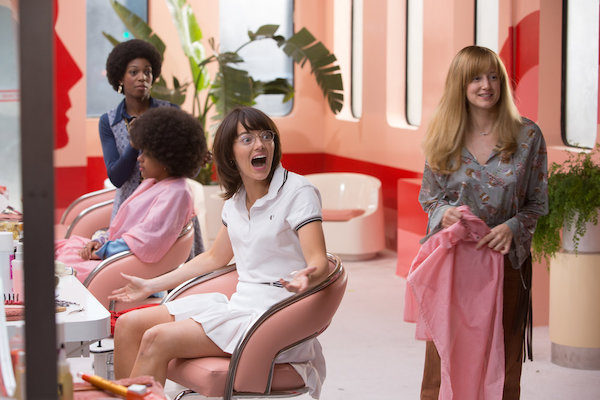 Is she a hairstylist?

I keep hearing rave reviews for this black comedy take on Russian dictator Joseph Stalin — I’m sure I’ll get to it at some point? Riseborough plays Svetlana, Stalin’s daughter. 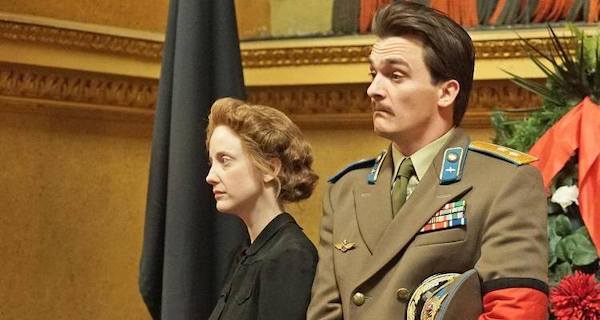 Keeping it simple yet of-the-period. 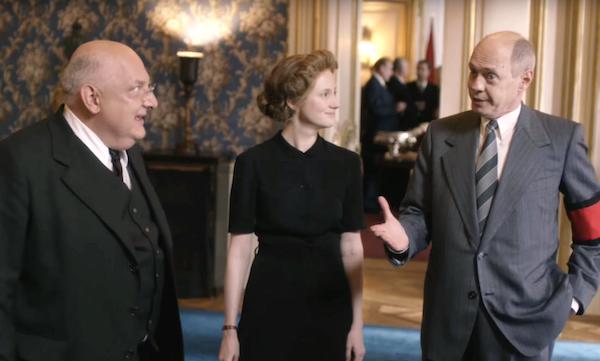 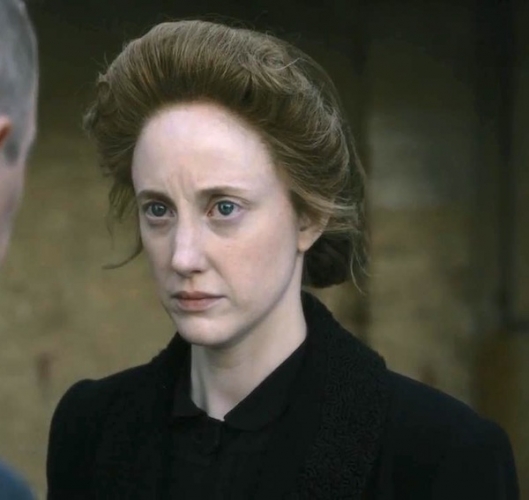