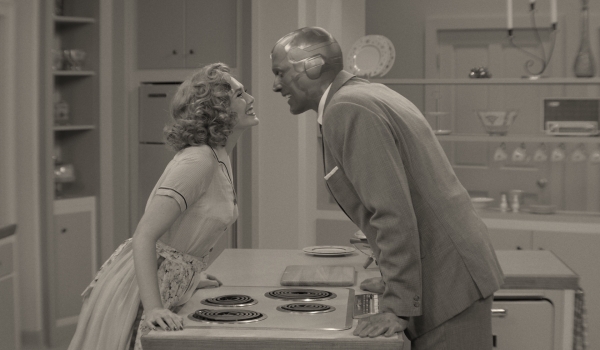 Alrighty. This is not going to be one of our typical costume drama posts, so bear with me. As Frock Flicks’ resident semi-competent nerd culture “expert” (lots of qualifiers there), it falls to me to discuss the following new TV show.

Disney+ just released the first two episodes of the first installment of the ambitious Phase Four of the Marvel Cinematic Universe, WandaVision (2021-), and I’ve just binged both and can’t wait for more. Judging by the sets and costumes, each episode jumps ahead about 10 years in an alternate reality where Wanda Maximoff (Elizabeth Olsen), sans Sokovian accent (for reasons), is trapped by some unknown entity with her android boyfriend, Vision (Paul Bettany), as characters in a 1950s sitcom akin to The Dick Van Dyke Show, I Love Lucy, and in the second ep, something drawing heavily from Bewitched (no doubt a nod to Wanda’s superhero name, Scarlet Witch). Though the third episode won’t drop until next week, the preview shows at least two more time jumps in sitcom history, the 1970s and 1980s, which are past the cutoff date of 1969 for this website, so this post will really just deal with the ’50s and ’60s episodes for the costume content, but also just a lot of my speculation about where the show in general is going. 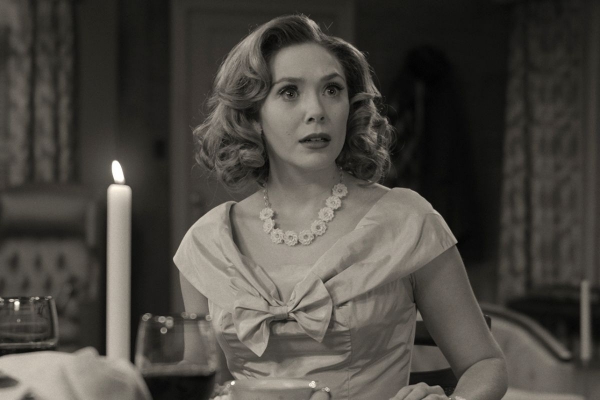 Elizabeth Olsen is just so lovely and finally, she’s being given room to play around with Wanda. The first episode has some really fabulous mid-1950s clothing, designed by MCU alum Mayes C. Rubeo.

Surprising perhaps no one, I am a big fan of the MCU movies. I never followed the comics in any meaningful way, but they certainly did make up a substantial part of the larger cultural miasma that I grew up in. That said, from the moment I saw Iron Man (2008) on the big screen … well, you could just say I was on board. Truthfully, I’m actually not so much writing this post for the fans of the superhero genre, but for the fans of costume flicks, who may find themselves intrigued by a show that’s not so much recreating history, but rather television history, and then wind up accidentally thrown into the deep end of the MCU pool as things get less Mary Tyler Moore, and more … Twilight Zone-y with some pretty esoteric comics history dumped on them.

In other words, I fear that this show is, at best, going to confuse both fans of the historical film genre and fans of the Marvel comics genre, and, at worst, it’s going to piss both groups off. 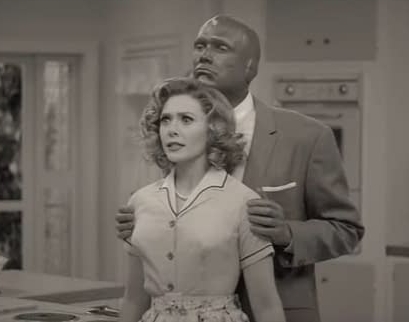 I’ve already seen more than a few “I don’t get it” comments in and around my social media sphere, which has me making the same face Elizabeth Olsen is making here. I want to yell “JUST STICK WITH IT!!!”

Oh, and since there’s no spoilers in history, but there are in the rest of the world, here’s your spoiler alert: I’ll not only be discussing WandaVision, but also some of the backstory about what makes these two characters important, not just to one another, but the overall Marvel Cinematic Universe. If you haven’t watched any of the Marvel Avengers films, and are still hoping to remain unspoiled (after like, 10 years, or whatever), now’s your warning to go get caught up and come back later to read this review. 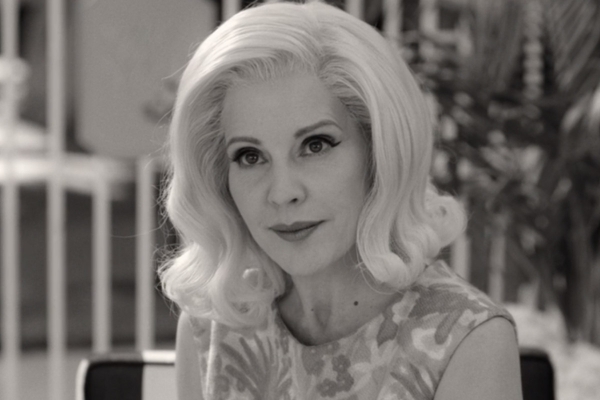 Emma Caulfield Ford shows up as Dottie, the doyen of Westview who rules Wanda’s neighborhood with an iron fist. Had a major Buffy fangirl moment when she showed up.

I’m just going to say it upfront: Disney made some bold choices in kicking off with a television series that deals with two of the more secondary characters in the Avengers cinematic saga, Scarlet Witch and Vision, and to center them in a plot that is driving the female character in that duo hard into the abyss of her own fractured psyche. Wanda’s always had a bit of a hard time dealing with reality, which is no surprise considering her main super power is to bend it to the breaking point. She’s also had a rough go of it recently, having been more or less directly responsible for the death of her boyfriend, Vision, in Avengers: Infinity War (2018). The gut-wrenching scene where Wanda is forced to destroy the Mind Stone, which is unfortunately situated in Vision’s forehead and basically gives him life, just to keep it out of Thanos’ hands, is one of the best scenes of the entire Avengers movie arc. In my humble opinion.

Do NOT fuck with Wanda.

If you didn’t know any of this, and you dropped into WandaVision, you’re going to be pretty confused. For those of us who do know it, it’s still confusing considering Vision is “dead” (or, at least destroyed, but who knows when you’re dealing with an android), and obviously it makes no sense that the undead Vision is hanging out in a black-and-white world with his living girlfriend, cracking jokes to a disembodied laugh track (though in reality, the first two episodes were filmed in front of a live audience, believe it or not). 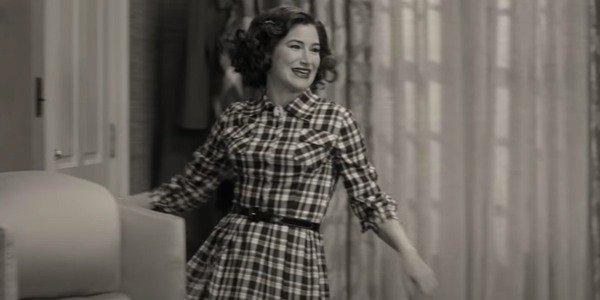 Speaking of fantastic comedic timing, Kathryn Hahn as Agnes, the nosy neighbor (or something more…?) is such a delight. I’ll watch her in anything. Also, that plaid frock is *chef’s kiss*. Wish we could see it in color!

Wanda and Vision also seem fairly self-aware of the improbable situation they’re in, but neither seems to be able to remember anything about their lives before they came to idyllic Westview, USA. In the first episode, when asked where they moved from and how long they’ve been married, neither can come up with an answer, and instead of quickly making something up on the spot, they both sort of just stall out, unable to so much as deflect the question to cover for the gap in their collective memory. How Wanda got there, with Vision no less, is clearly the big question driving the plot. 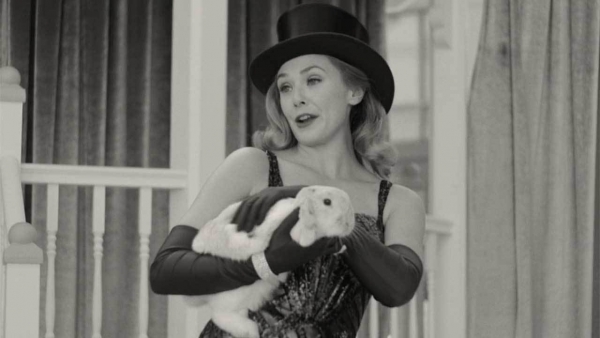 The magic show in Episode 2 is genuinely funny and sweet and filled with Easter Eggs for those who are well versed in Marvel history.

Some think this is a construct of Wanda’s grieving for Vision, an attempt to reset the pieces of her life in a picture-perfect 1950s sitcom fashion, where no problem can’t be overcome without a funny quip and a perfectly baked pot roast. I was also thinking along those lines after having watched the previews, but now I’m wondering if there isn’t something else at play, and Wanda may not be there (wherever there is) of her own volition. It’s that question of who is behind the veil watching Wanda play house with Vision that has me wrapped up in the cozy world of fan theories and possibilities. 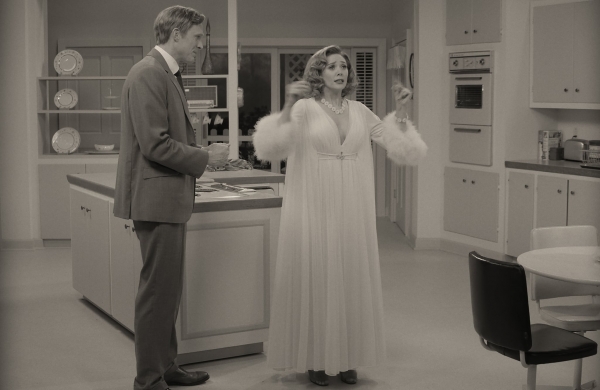 All of this is to say that I am hopeful for WandaVision being an important turning point for the Marvel Cinematic Universe, for all of the reasons I listed above, but also because I really enjoy the “reality within unreality” that the show is playing with. Only time will tell if it will serve all of the expectations heaped on it as the pivot point in the MCU’s Phase Four, but so far, I think it will. And for aficionados of historical costume flicks, I think it will also provide a fun diversion into a bit of TV history.

Have you seen WandaVision? Share your thoughts (and spoilery fan theories) with us in the comments!