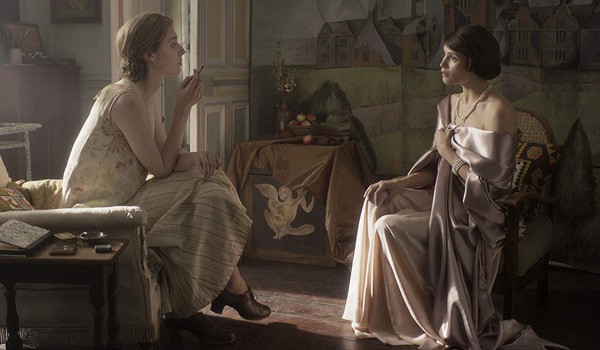 Neither a love story nor a factual biography, Vita & Virginia (2019) is impressionistic, fascinating, and GORGEOUS to look at. I was never quite convinced that either Gemma Arterton was Vita Sackville-West or Elizabeth Debicki was Virginia Woolf, but I did enjoy their performances because the script gave them some stellar dialog that made vivid points about feminism and personal relationships. However, the plotting also meanders around at times, substituting lingering gazes and letter-reading for emotion. Sometimes this seems appropriate given the literary topic, but sometimes, well, maybe it’s too much…

Director Chanya Button told The Guardian: “I’m really aware Vita and Virginia is an arthouse film and that enables you to make stronger choices, because you’re not looking for a broad audience.” Which I admire her for just out and saying for a change — she’s not purposefully dumbing things down to make her film “relatable.” Button also told the SF Chronicle Datebook that she felt this story was important because of the historical inclusion it represents for both woman and queer people:

“Especially for younger audiences who identify as LGBT, to watch a historical film in which part of their identity is reflected is so important. People on the spectrum of sexuality have existed forever even if it’s not always reflected. I grew up without it available. You had to look for it.”

Right on! This part is generally accurate, in that the Bloomsbury Group was rife with queer relationships and open marriages, such as Woolf’s sister painter Vanessa Bell, married to art critic Clive Bell, and she had a relationship with painter Duncan Grant, who also had a lover, writer David Garnett. They all lived together in Sussex and are portrayed in a flattering light in the film. 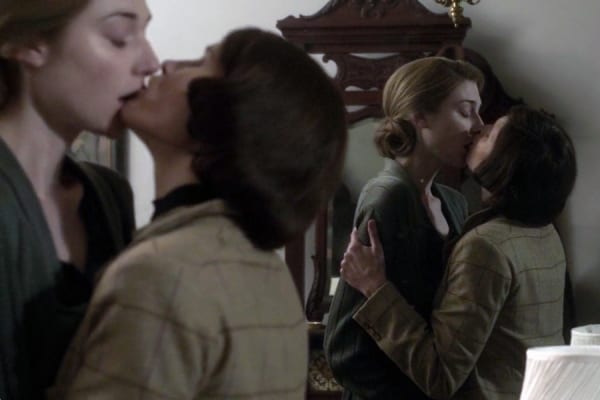 The relationship between Woolf and Sackville-West was mostly portrayed in this film as an intellectual infatuation, not as much a physical one. They do have sex eventually, but that side is rather downplayed. There’s a lot of dialog taken from their letters to each other, which yay for accuracy, but boo for naturalism because sometimes it sounds forced. As a literary geek, I really feel the struggle with these literary films because it’s frickin’ hard to translate the writing process and how a writer’s life if filtered into their works onto the big screen. Many films try, and I have a hard time saying what ones have succeeded.

Whatever the pros and cons of this story, damn, the 1920s costumes by Lorna Marie Mugan are amaze-balls! I’m frankly shocked because this costume designer is best known for six episodes of Peaky Blinders (2014) and 16 of Ripper Street (2012-2013), neither of which impressed me at all. But she did her homework for this film and designed distinctive historical wardrobes for the two main characters.  In The Gloss, Lorna Marie Mugan said:

“All of the costumes were tailored in our workroom by my fantastic team led by chief cutter, Gill Howard. I usually sketch and play with colour and tone whilst choosing fabrics. I also created some bold print fabrics for Vita. Most of the accessories and trimmings were original vintage that we sourced for the project.”

The attention to detail shows on screen and makes this film easy to watch. We first meet Vita Sackville-West, who has a gloriously striking outfit in just about every scene. Mugan told British Vogue about Vita:

“She was bold, curious, restless and often tired of people when the conquest was won. So, her costumes are playful, slightly ahead of her time, monochromatic, androgynous, yet always have a noble silhouette. She was a punk in a castle. I wanted her to look like she experimented and tried on new personas, with her look changing to reflect her current mood.”

In The Gloss, she described the first outfit we see Vita in: “My favourite design for Vita is the black and white silk shirt with ruffle collar and cream palazzo pants. This is her interpretation of a tuxedo: elegant, sensuous and quirkily androgynous.” 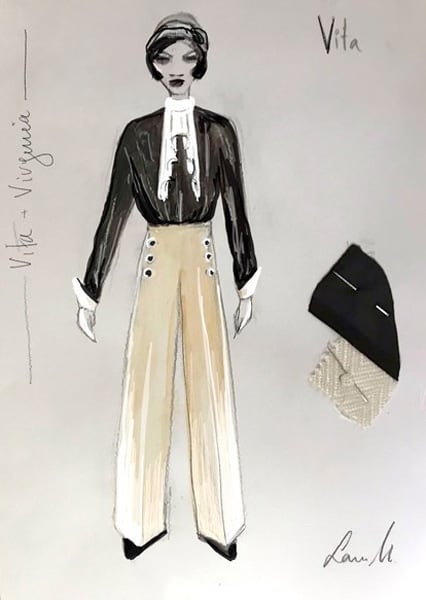 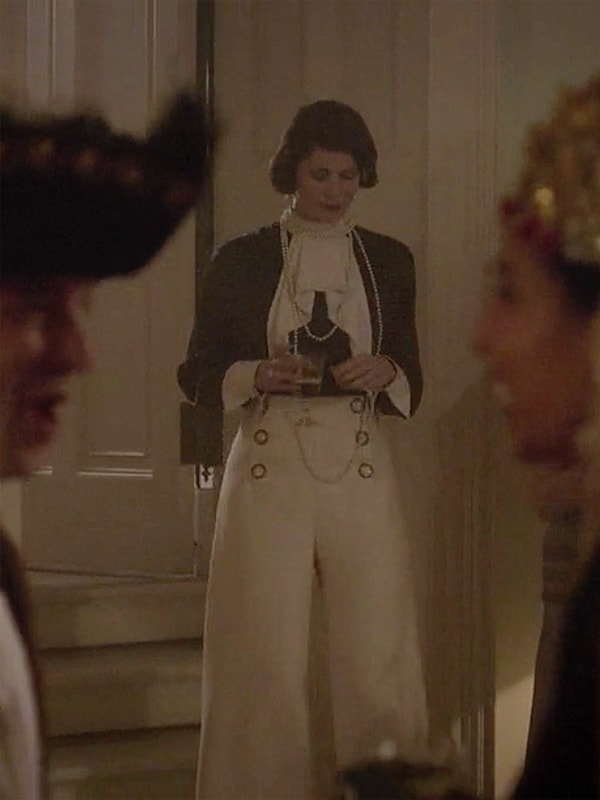 The only time you can see the full pants are in a dark party, so I had to lighten the screencap. 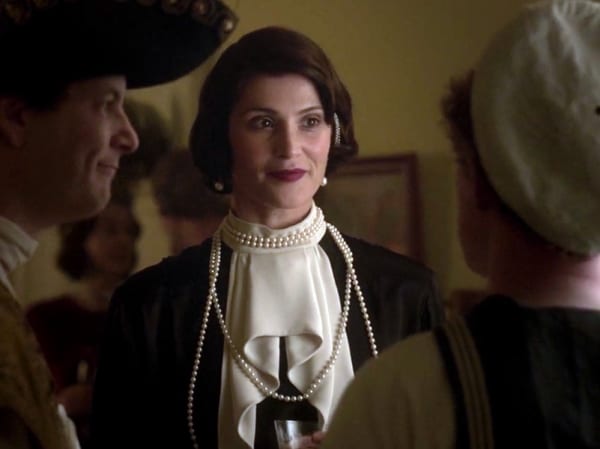 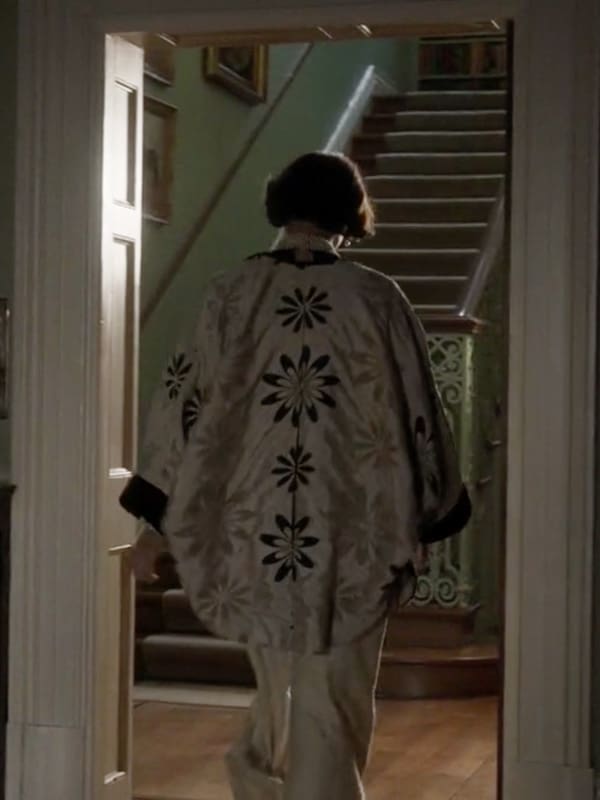 She throws this fabulous print jacket on over the outfit. 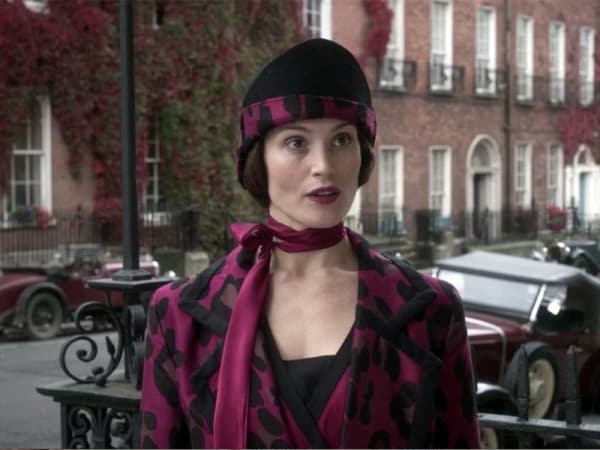 However, I’m not so sure about the pink leopard print… 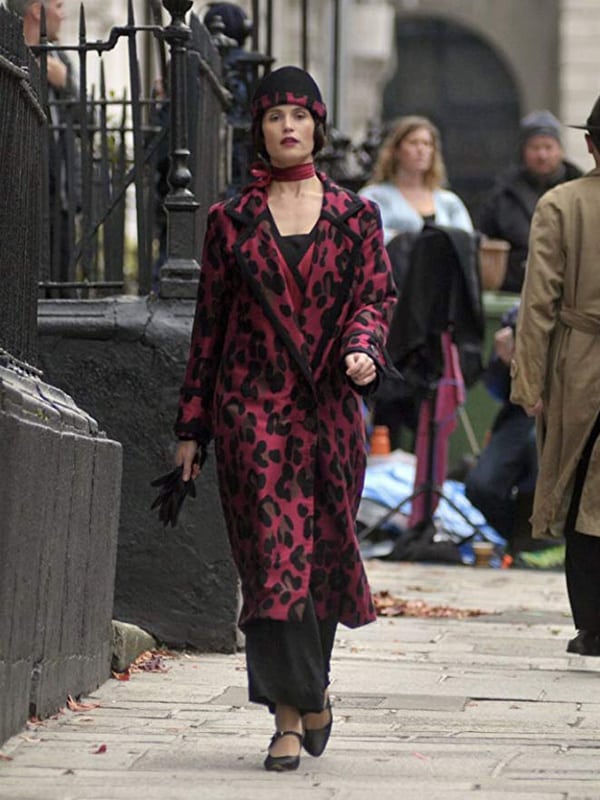 I’d posted this behind-the-scenes pic in our Patreon blog a while ago, & I’m still not impressed with it in the film. 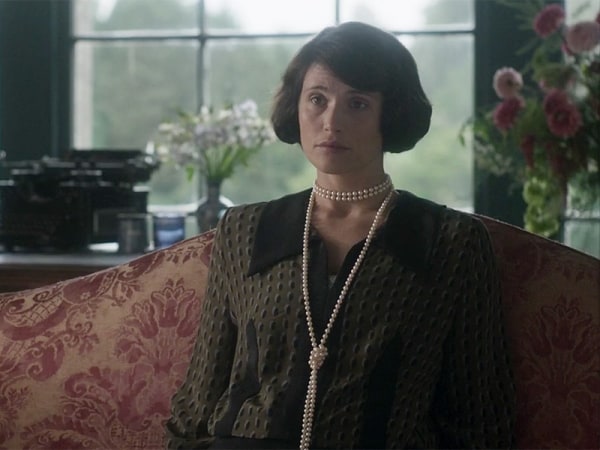 But this print strikes me as more of the period. 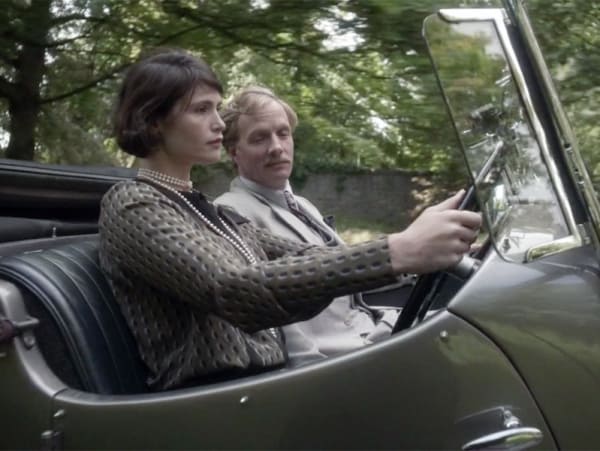 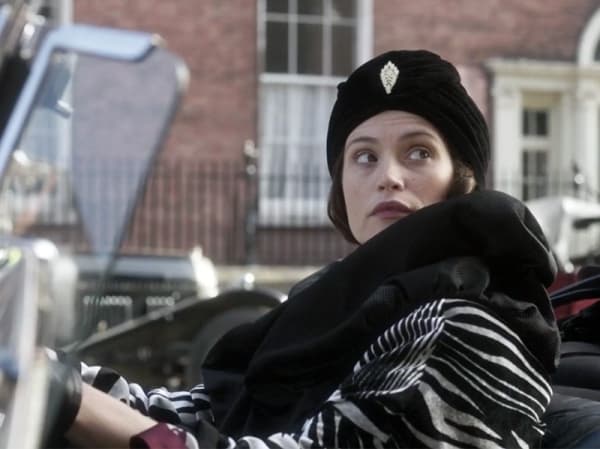 The costume designer said Vita’s clothes were ‘influenced by her travels to exotic lands’ but c’mon, zebra print is so literal. 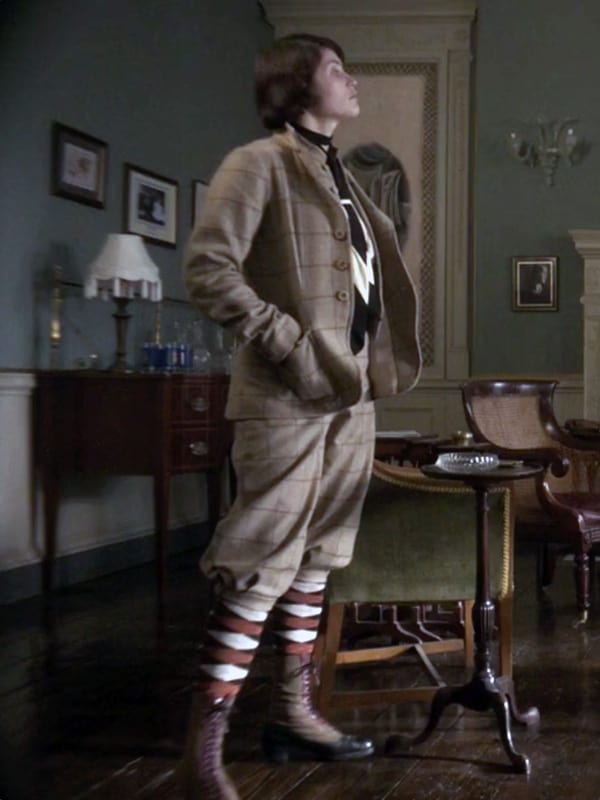 The knickers suit is an appropriate ‘sporty’ side of Vita’s wardrobe, considering she already wears pants so often. 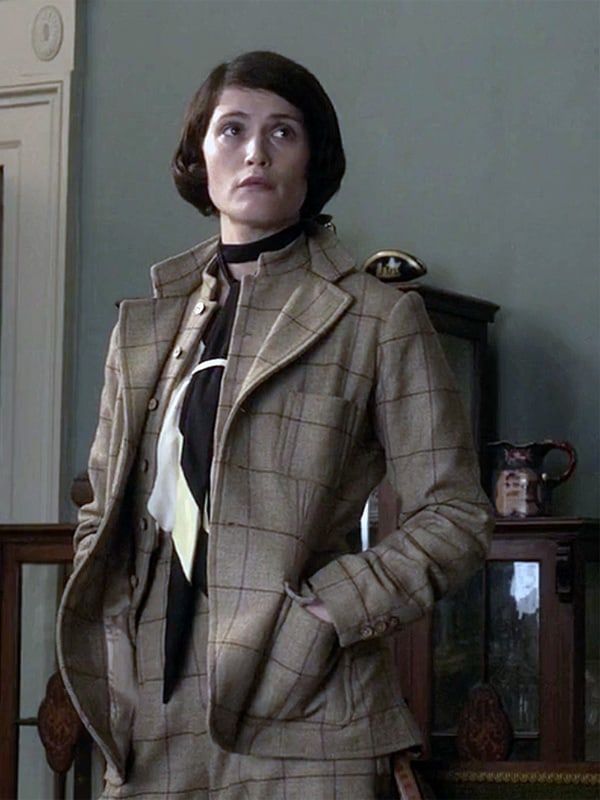 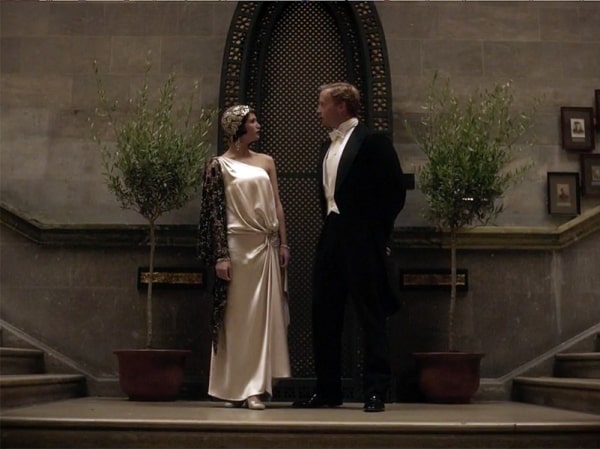 A rare evening glam outfit when Vita accompanies her diplomat husband to Cairo. 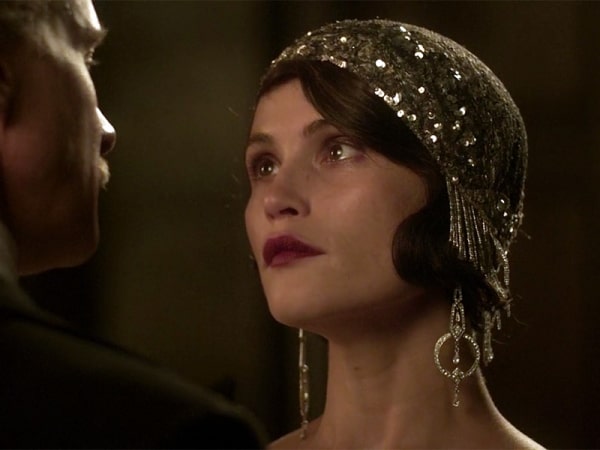 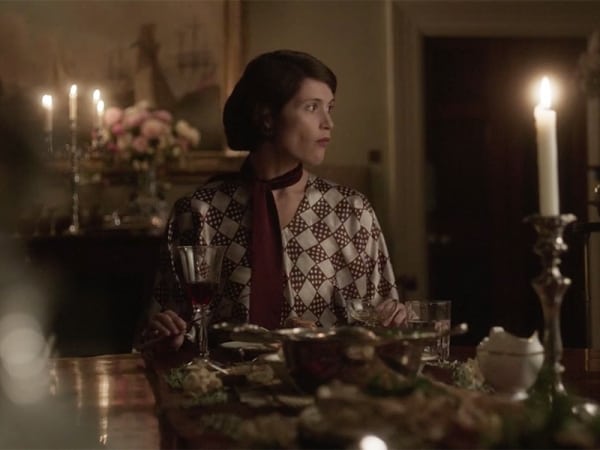 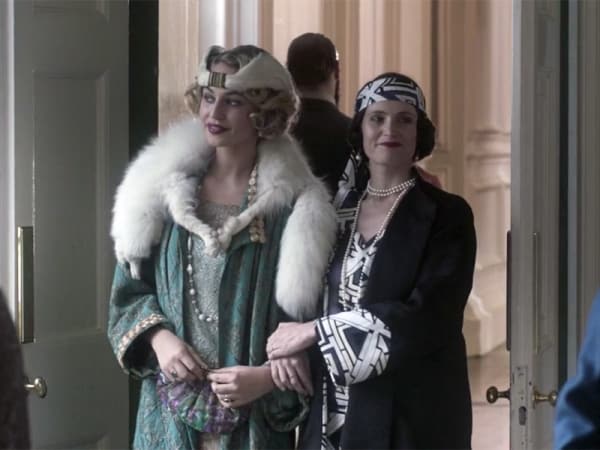 Vita goes back to black & white when she trots out a new girlfriend in front of Virginia. 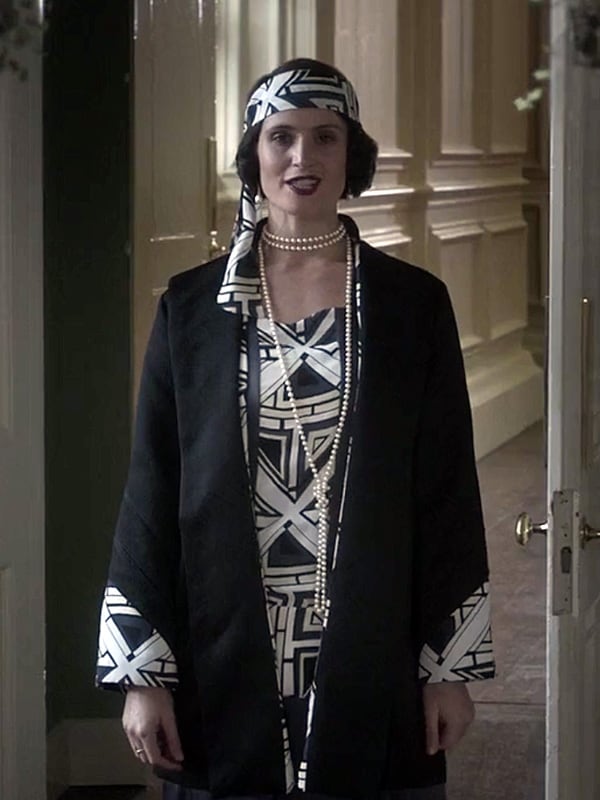 Virginia Woolf’s clothing in this film is much less flashy for a number of reasons. She’s more middle-class compared to the landed gentry Sackville, and she’s long been troubled by mental illness. Costume designer Lorna Marie Mugan told British Vogue how she created Virginia’s outfits:

“Her costumes are more layered, with delicate fabrics, soft chiffons and devour velvets, some bold bohemian pattern, yet fragile and needing the layer of a soft wool cardigan occasionally. Her silhouette is consistent and adheres to a style that she is comfortable with and that complements the palette of her study, the centre of her world. She was apparently incredibly meticulous in the detail of what she wore, with clothes and fabrics having aesthetic value to her. So, trying a new dress for an important occasion would have caused her great anxiety.”

Her palette is black and tones of blue, grey, and green, and her long hair is coiled up, in comparison to Vita’s bob. And yet, the first scene we meet her is a costume party where she’s cross-dressing in a renaissance man’s suit and ruff with her hair flowing free. 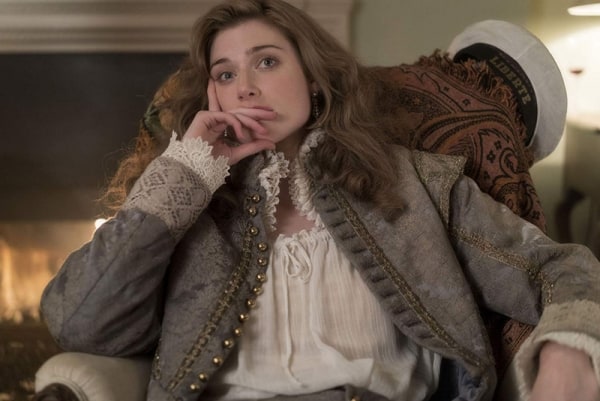 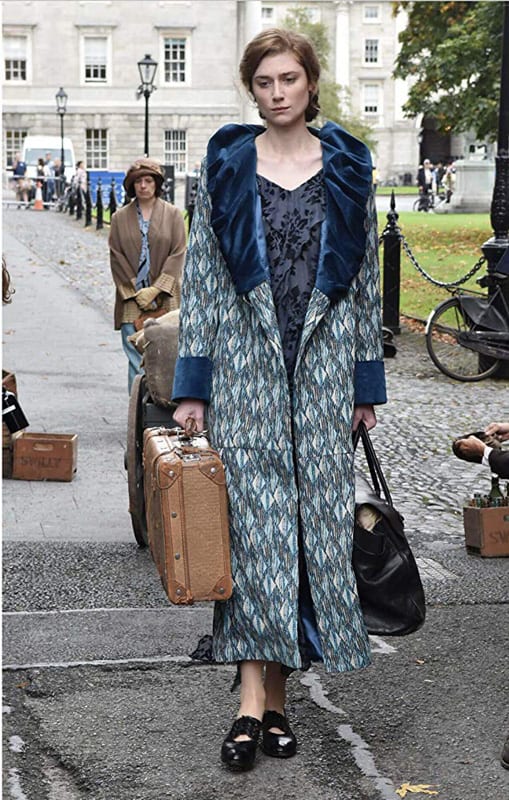 Behind-the-scenes shot of a coat Virginia wears often. Yes, she wears a hat with it. 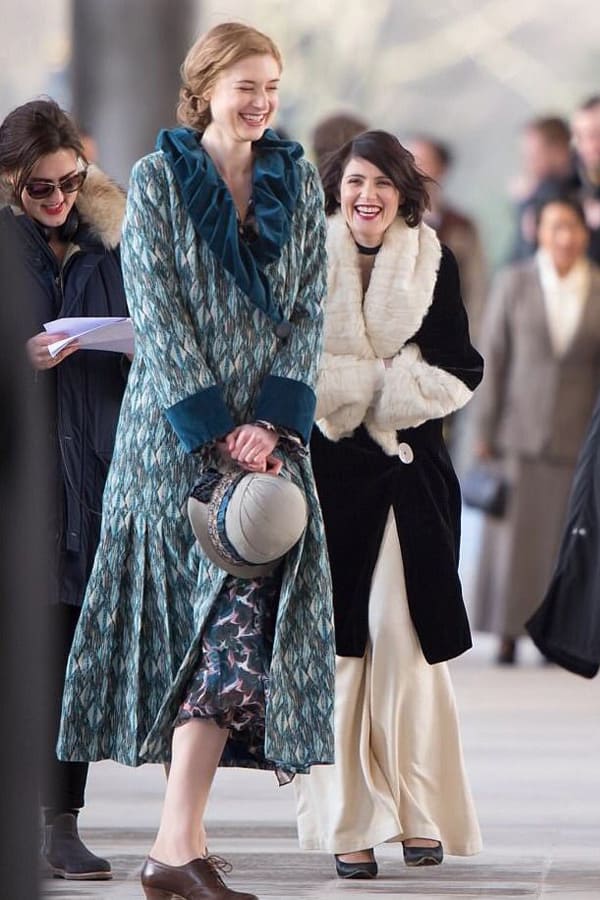 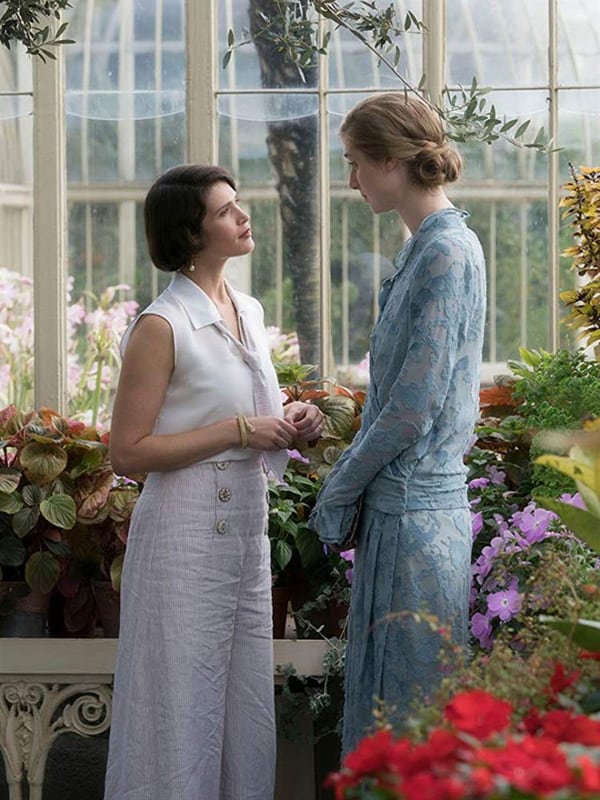 Vita in kicky linen pants. Vita in a droopy blue dress that she wears in other scenes with a drab sweater. 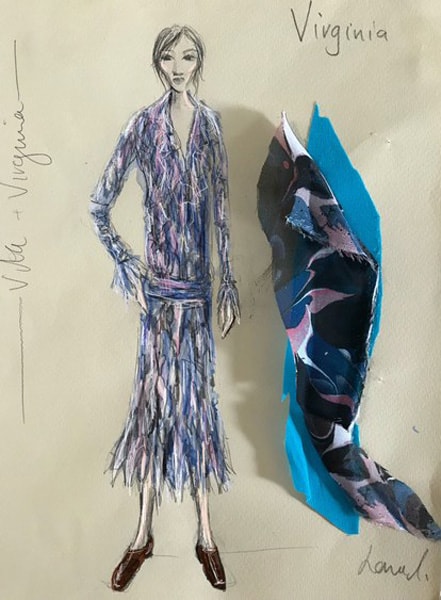 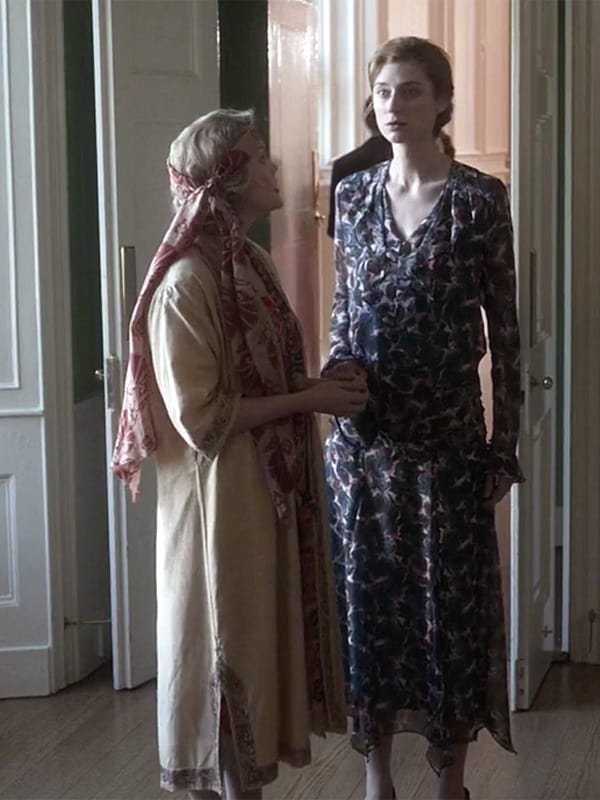 Virginia in that print dress at her sister’s art opening. 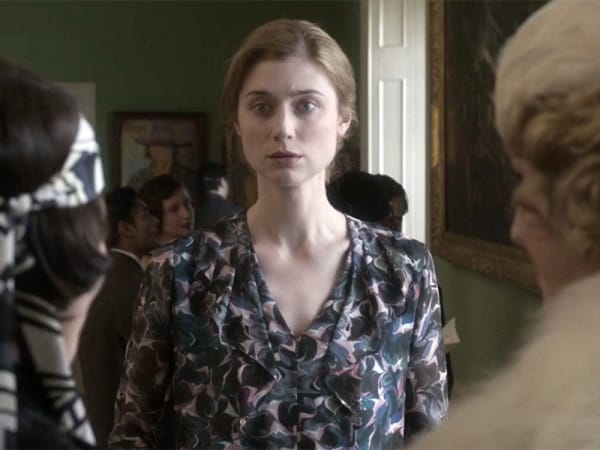 Where Vita brings her new girlfriend.

And finally, we have Isabella Rossellini, as Vita’s disapproving mother, Lady Sackville. She drops in for a couple scenes to be snarky and wear fabulous outfits, as you do. In British Vogue, Lorna Marie Mugan said of the costumes for Rossellini:

“We had to make her outfits without meeting her. She came in a day or two before filming started and her outfits were incredibly intricate. But it worked, and she was a bit overwhelmed by the hats we had made, particularly by the standard of the finished products.”

I agree, it worked. 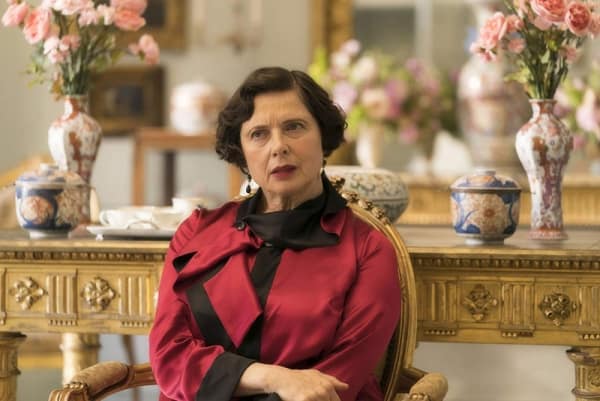 This color is so good on Rossellini & the over-complicated neckline is just grand. 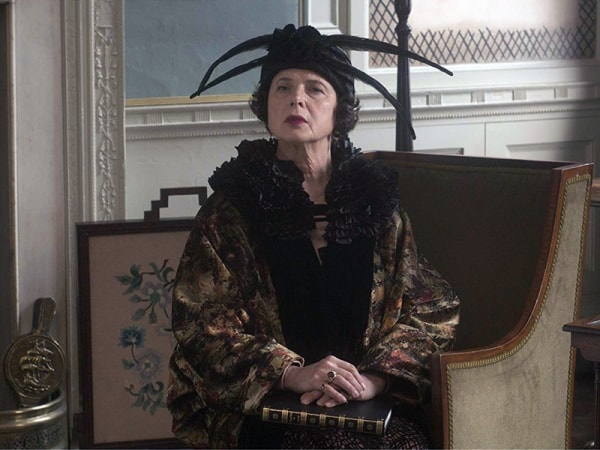 Will you watch Vita & Virginia for the costumes?