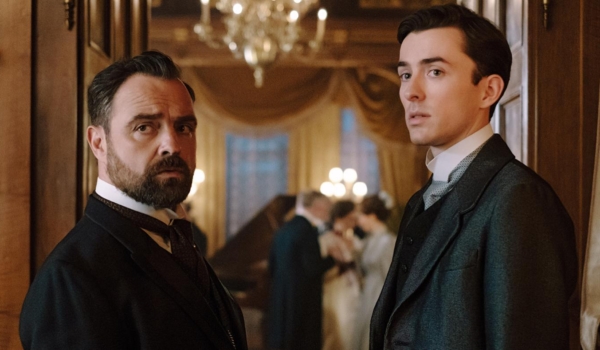 As someone who loves both murder mysteries and period flicks, I’m of two minds about Vienna Blood (2019-). As a historical costume piece, it is actually pretty good, set in the cinematically underrepresented era just prior to the First World War where a lot of Viennese culture and fashion comes across as very modern and chic. As a murder mystery show, though, it’s kind of boring.

The actors are not given a lot to work with, and what they are given is mostly just tired old tropes like the Crusty Old Detective Who Works Alone, the Annoying Intellectual Kid Who Is Teamed Up With Him Against His Will, the Bitchy Sister Who Won’t Stop Nagging Her Brother, the Bland Girlfriend Who Will Probably Be Dead Before The Series Is Over, and the Mysterious Woman Who Haunts The Annoying Intellectual Kid’s Dreams, and basically every other stock character you can throw into a mystery show. I guess you could say that the writers of Vienna Blood know their subject matter really well, because the writing absolutely clings to those stereotypes for dear life as though that’s the only thing they’re afraid the show has going for it, which is weird considering the secondary plot line.

The show attempts to inject a layer of cultural dissonance between the Jewish protagonist Max Liebermann (aka the Annoying Intellectual Kid, played by Matthew Beard) and the rest of “respectable” Vienna society that his family is desperate to secure their place in. That subject on its own would be more than enough fodder for a miniseries about an ambitious Jewish family trying to break into Viennese society right before everything goes to hell, but it feels crowded out in Vienna Blood by all the murder. 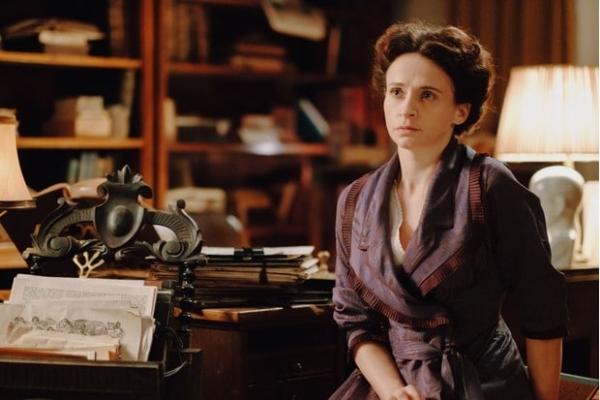 Bitchy Sister does get some really nice outfits, though. I particularly liked this wrap dress.

The main thing the show has going for it, however, is that the costumes (and hair and makeup) are really very good. Designed by Austrian designer Thomas Oláh, they show how varied upper-class clothing was in Vienna in the first decade of the 20th century. There are designs that directly reference Josef Hoffmann’s creations of the early Wiener Werkstätte period, Gustav Klimt’s dress reform aestheticism, Poiret’s futuristic flare, and Fortuny’s impossibly simple combination of silk pleats and luxurious velvets. 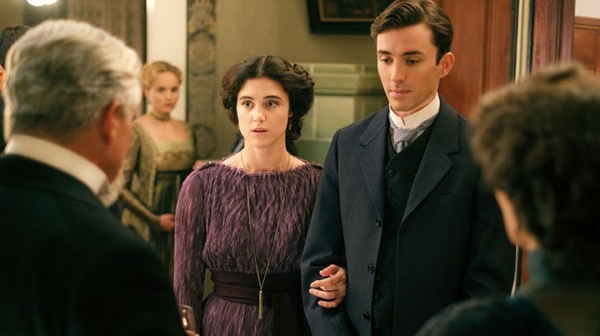 The technical term is “Fauxtuny.” Still, it’s a good approximation of the style and is quite pretty. Better than destroying the real thing just for some TV show. 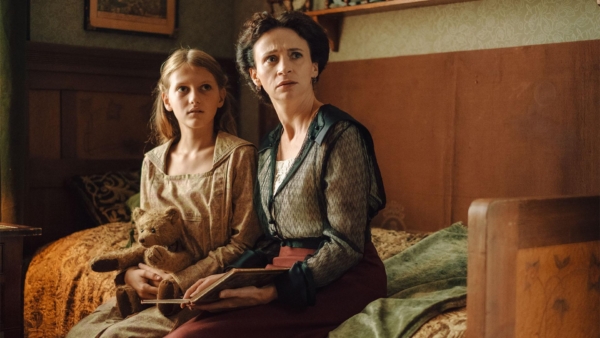 Another nice outfit for Leah, aka Bitchy Sister. A sheer shirtwaist worn over a camisole, and paired with a smart brick colored skirt. It’s practical but fashionable. 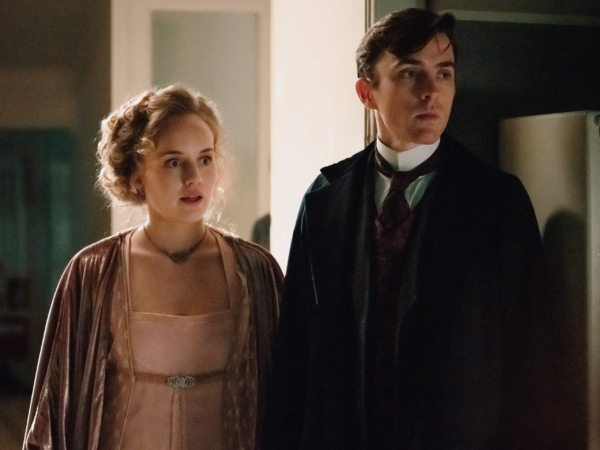 The only thing not boring about Boring Girlfriend is her clothing. She gets some extremely cool, very fashion-forward outfits. 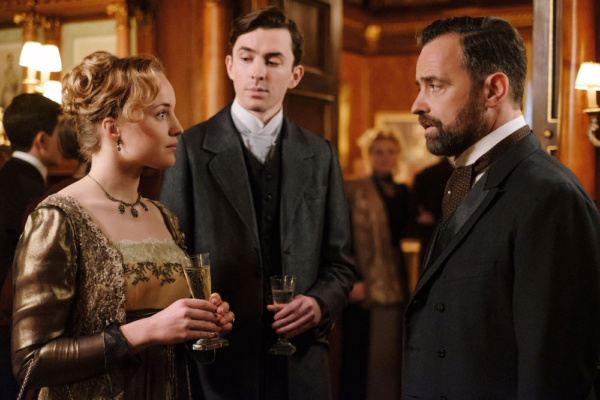 Gold lame is tricky, but this looks very much like a gold-and-black shot organza, and it’s an effect I happen to love. 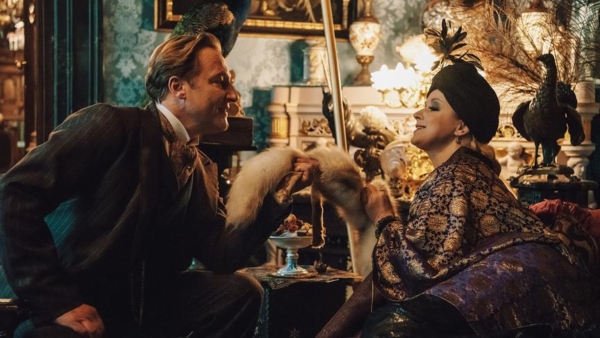 There are some really good hats on the women in this show. 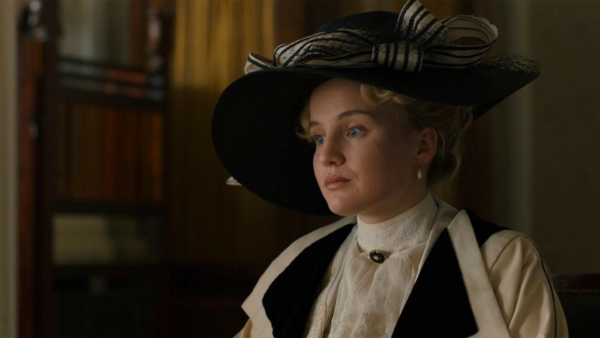 I’ve always been a sucker for a good wide brimmed hat and black and white stripes. The hair could stand to be a little fuller to balance the size of the hat, but it’s not bad. 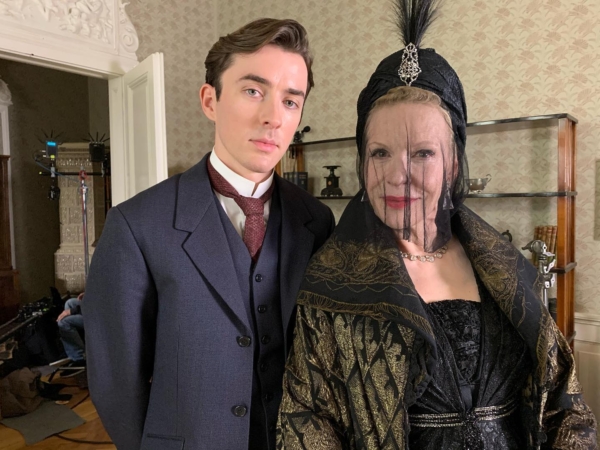 Behind the scenes shot with another great hat. Matthew Beard is way too corpselike himself for me to really get behind his character, though. 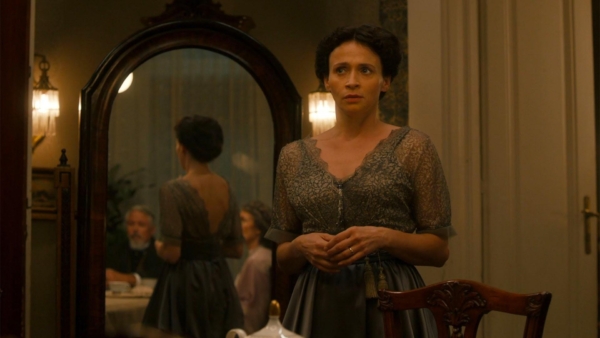 While I’m not wild about this color choice, I do love the cut of this dress that Leah wears during a dinner scene in one episode. Nice camerawork to show off that low V back, too.

Is Vienna Blood worth watching as murder mystery show? Eh … But if you want to look at pretty costumes from circa 1907, it’s delivers that much.

What did you think of Vienna Blood? Share your thoughts with us in the comments!