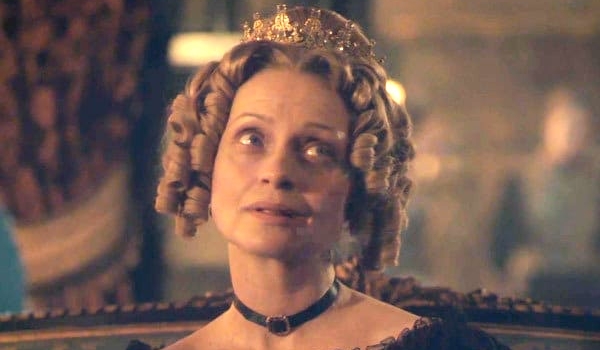 Kendra recently talked a bit about her “meh” feelings towards Victoria (2017), but I’ve been watching it and finding it more enjoyable than not. Yes, the plot is bullshit and only passingly related to the actual history, but the costumes are pretty! Rufus Sewell! Tiaras! Also, Rufus Sewell!

As hard as it may be, let’s put aside Rufus Sewell for a moment and talk about the tiaras. One of my (fairly minor) issues with the show is that the costumes are actually pretty accurate for the late-1830s, the tiaras are all over the map. Most are actually Chinese-made reproductions available on eBay for under $20. I feel it is only right to warn you that if you’re certified in tiaraology, this is going to bug the crap out of you.

The Girls of Great Britain and Ireland Tiara 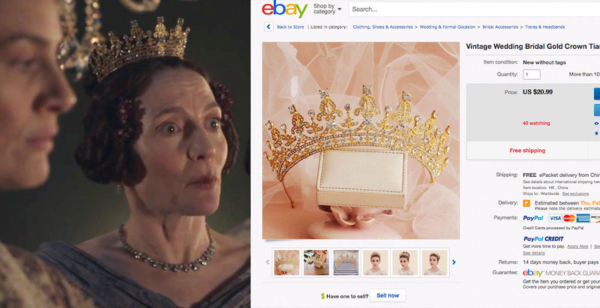 The Girls of Great Britain and Ireland Tiara repro

More commonly found in silver (like the original), this is a gold version of the Girls of Great Britain and Ireland Tiara. It’s a pretty tiara, no doubt about it, but when we see Lady Emma Portland wearing it in episode 1, it’s 1838. This tiara didn’t come into existence until 1893.

Apparently someone must have figured this out because two minutes later, she’s wearing a completely different tiara. 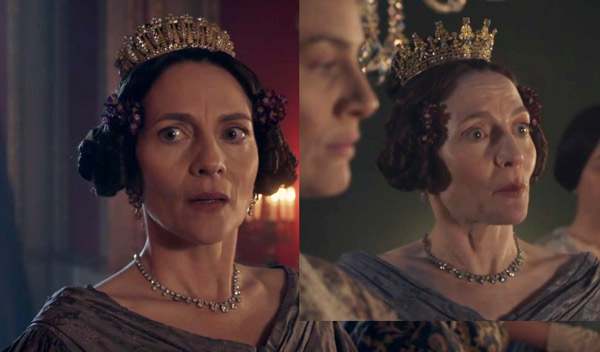 More on tiara continuity in a bit… 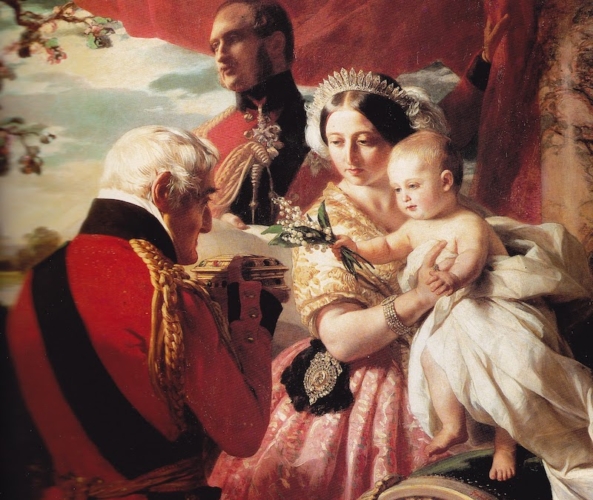 So, this one is a kind of an enigma. We know that Victoria inherited the Hanoverian Fringe from her aunt, but it’s gone through a few different iterations, in addition to there being numerous other fringe tiaras in existence. Victoria’s fringe tiara, seen in the Winterhalter painting above, was originally a necklace that Victoria had set into a headband. Here’s where it gets confusing: The Hanoverian Tiara is probably still in the Royal Collection, but the fringe tiara that is most often mistaken for it is the fringe tiara owned by Queen Mary. That fringe tiara was originally a necklace gifted from Victoria to Mary; Mary then set the necklace into the tiara configuration in 1919. Apparently, these are two completely different tiaras. 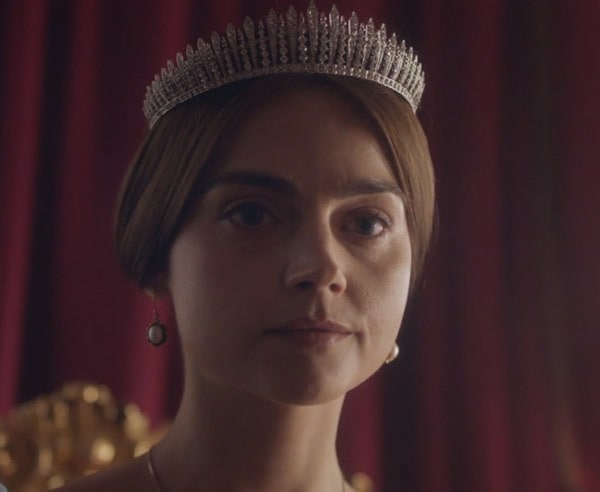 From “An Ordinary Woman,” US episode 5.

Queen Mary’s fringe makes its debut in the episode “An Ordinary Woman,” which is roughly around 1840 for those of you keeping track. Victoria probably had the Hanoverian tiara by that point, but, like I mentioned above, it was set into a headband so that the fringe stood perpendicular over her head; this one is most definitely a repro of the Queen Mary Fringe. Given the insane number of fringe tiaras out there, I will cut them some slack here. If you’re looking for an inexpensive knock-off of this tiara, you can totally find it on eBay.

The Cartier Bandeau Tiara is one of the most recognizable and famous of the tiaras around, and it dates to 1910. So, about 70 years too early for 1840. It’s fabulous, however, and if you want to own a copy of it, look no further than eBay. 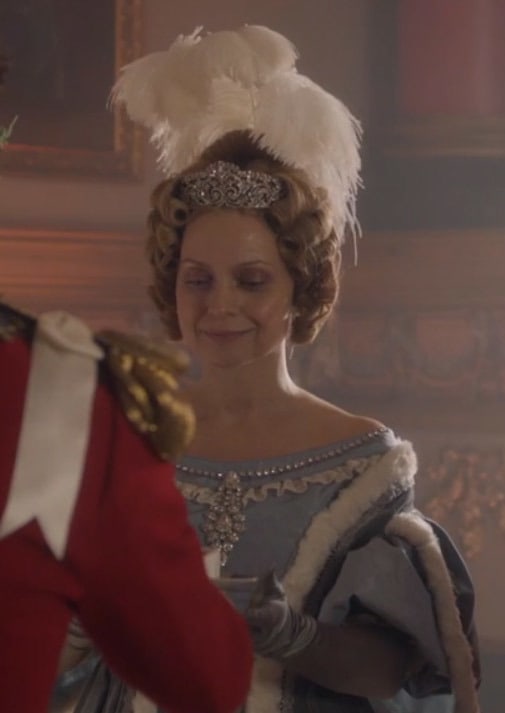 It’s hard to say exactly, but I think the Duchess of Sutherland is wearing a repro of the Cambridge Lover’s Knot Tiara in a brief scene from episode 5, “An Ordinary Woman.” It doesn’t look quite the same (the Cambridge Lover’s Knot doesn’t have a pointy bit centered, whereas this one does), so I’m not sold on it being an exact repro; plus, there are plenty of pearl drop tiaras in existence, so it could be a variation on one of them. The Cambridge Knot Tiara was commissioned in 1913, so again, it’s an early 20th-century tiara. 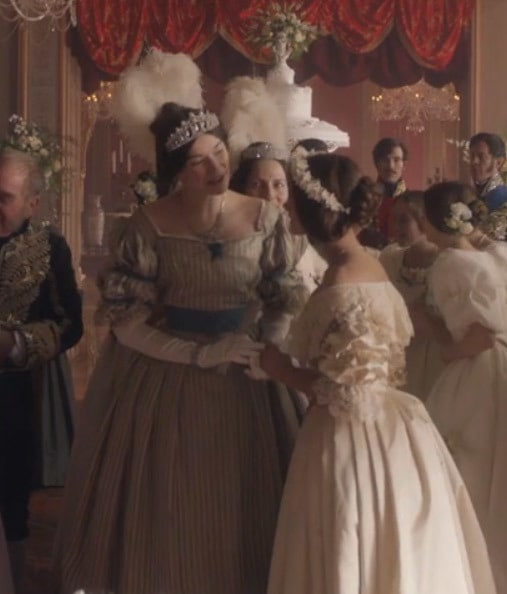 The closest I can get without a good look at it is this repro tiara, but there are a couple pendant pearl tiaras available on good ‘ol eBay, including a passable Cambridge Lover’s Knot, if you’re interested in something like it.

This extra looks like she could be wearing a repro of the York Diamond Tiara, but it’s hard to say. She’s only seen for a split second before cutting away, and it’s not a very clear shot. We will just presume it is the knock-off until proven otherwise. The history of the York Diamond Tiara appears to have started with Sarah, Duchess of York, who was given the tiara as a wedding gift from Queen Elizabeth II, but beyond Fergie there’s little history of its origin. We’ll just say that the tiara is 150 years too late for 1838 and leave it at that. 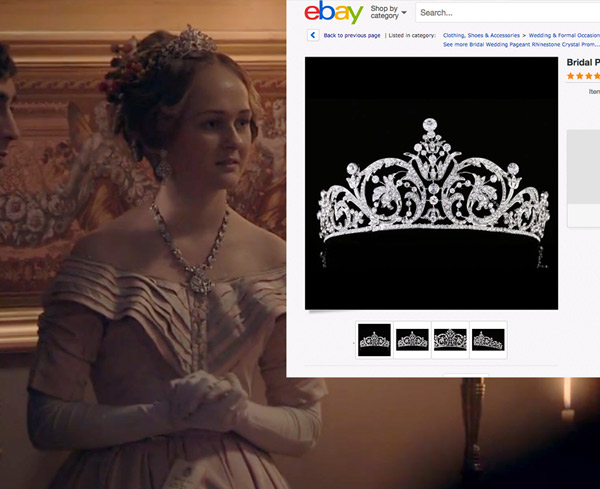 I feel like someone should have done something about that bertha, too.

I’m not certain that this tiara is a reproduction of anything, but it was used for nearly all of the promo photos and throughout the show. It’s pretty, but it’s driving me crazy because I feel like I’ve seen it somewhere before. Anyway, this is the tiara that Victoria wears most frequently, so you see it a lot. It’s available on eBay right now for the low, low price of $19.99. 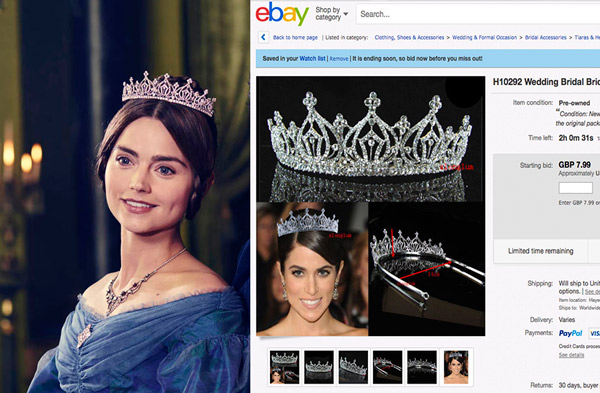 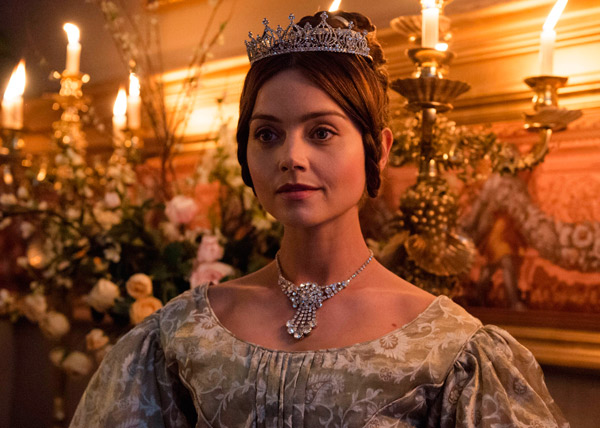 By far, the most annoying thing is the tiara continuity problems. At first, I was willing to forgive them for swapping the Girls of Great Britain and Ireland tiara out for another one on Lady Emma, but then this happened in episode 2 (or the second half of episode 1 for the US audience):

I mean, this isn’t just one little tiara switcheroo on a secondary character. This is about as glaringly obvious as it gets. In just over a minute there are three separate scenes of Victoria wearing two different crowns and possibly three different dresses. Where did the sash go? Is anyone driving this show? Is everyone asleep at the wheel here? 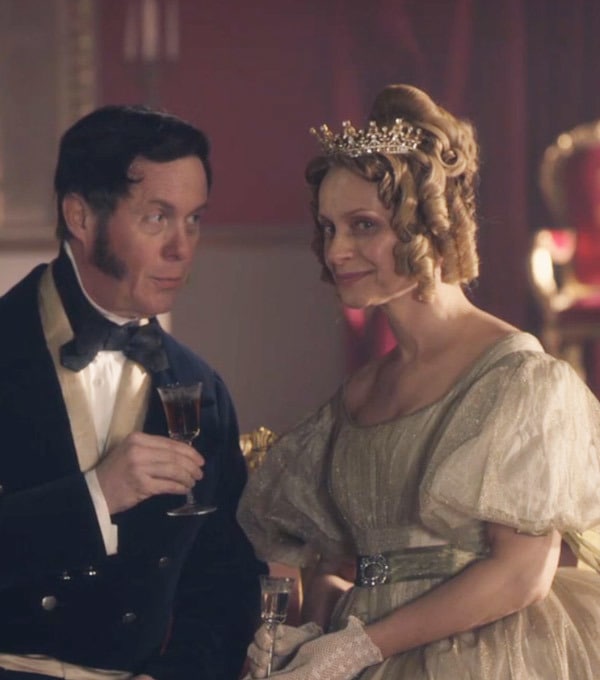 Is this the Victorian equivalent of when someone snatches your weave?

Not only that, but the Girls of Great Britain and Ireland makes another appearance in Episodes 4 and 5 on the Duchess of Kent. So… They swapped it out on Lady Portland in mid-scene, only to end up reused on another character four episodes later?

This is why mommy drinks.

There are many other tiaras throughout the show that I’ve not been able to source, but which look REALLY familiar… If you can identify them, drop it in the comments!