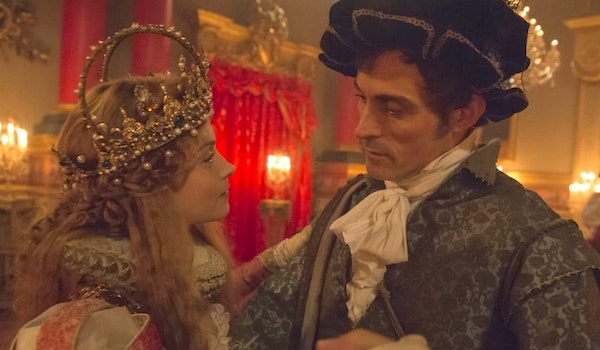 I am going to come out and say it: I have been enjoying Victoria (2017) despite the fact that it’s pretty much, as one Frock Flicks commenter said, bad historical fanfic. Still, it’s entertaining bad historical fanfic and the costumes are on the whole pretty good. There are a few “what the frock” moments, though. In the US episode 2/UK episode 3 (I’ll never understand why they do this to us), Victoria hosts a fancy dress ball in honor of her uncle, the King of Belgium. She’s obsessed with Elizabeth I, especially after her proposal was rejected by Lord M (hence the “bad historical fanfic” description) and she’s determined to rule forever alone. It’s all so very 18-year-old angsty drama, so I give the scriptwriters props for capturing the correct amount of emo, even if there’s no way in hell the real Victoria thought of the real Lord M as anything other than a father figure.

But I’m getting sidetracked… The fancy dress ball is a great excuse to throw together a huge amount of costuming into one scene and there’s plenty to feast your eyes on. 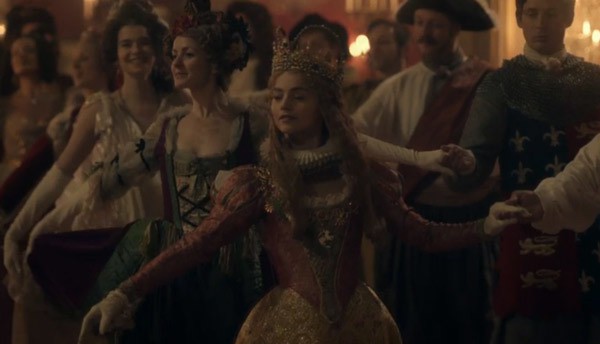 That’s a milkmaid, I think… 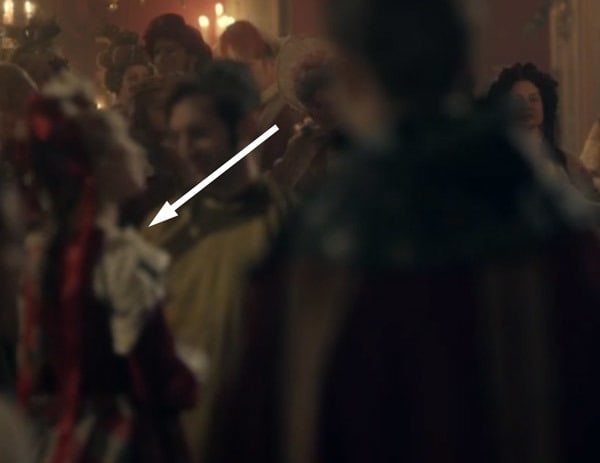 We only catch a glimpse of this costumed extra in this single scene, but I really want to see the costume! It involves long trailing ribbons and looks fabulous. 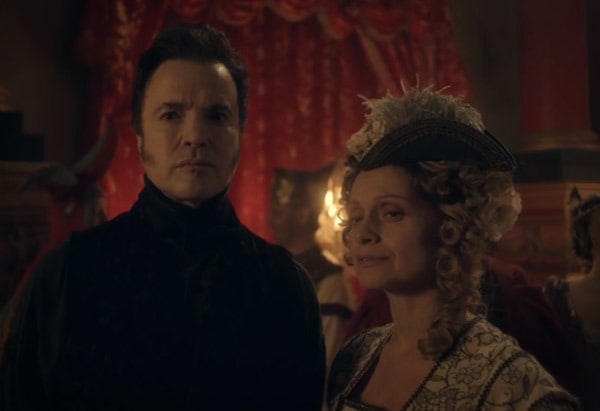 Sir John is cosplaying a Disney villain, while the Duchess of Kent is wearing a fabulous embroidered Elizabethan jacket with an anachronistic tricorn hat. 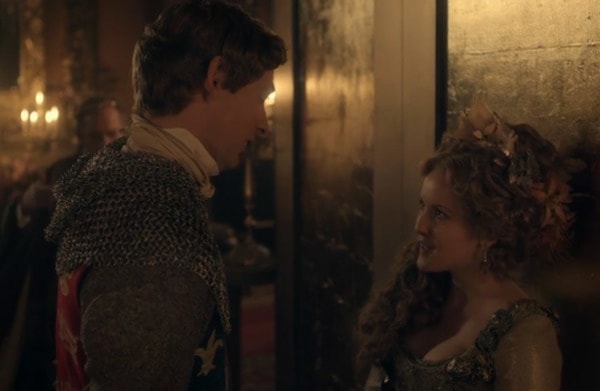 Poor nerdy Cousin George finally gets a chance to chat up a pretty young lady dressed as something involving a heaving bosom and a lot of fake flowers.

But, of course, it’s Victoria who takes the center stage as Elizabeth I wearing a rather decent 16th-century gown. 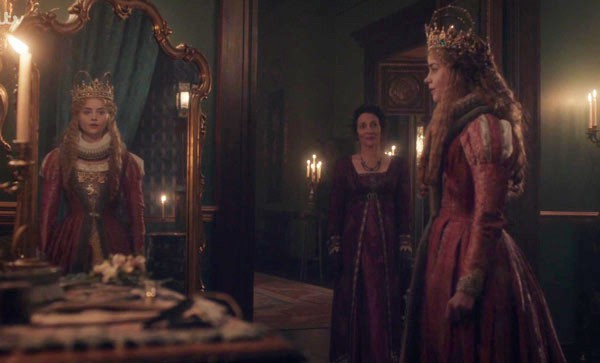 I was actually pretty impressed with the costume, the obnoxious crown and floating ruff notwithstanding. 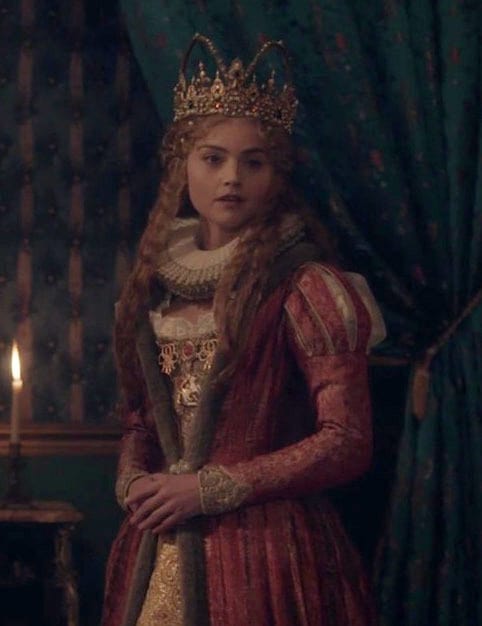 It’s a lovely gown. I’d not hesitate to wear it myself. 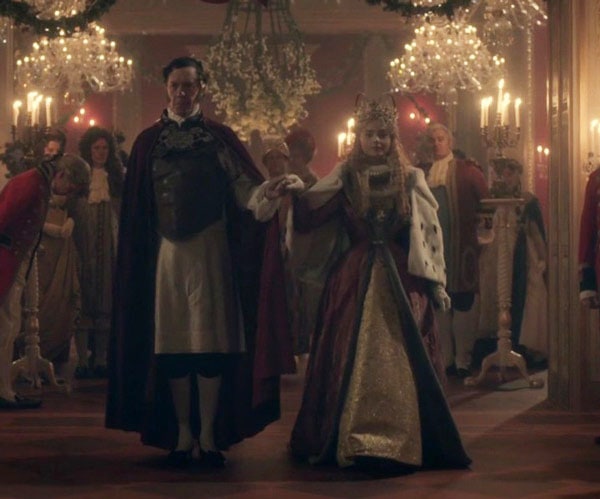 Victoria’s entrance with her uncle (who I think is supposed to be Julius Caesar). She’s still wearing the fur-trimmed gown, but she’s added an ermine fur cape.

I just want to pause right here and reiterate that I think this is a very nice costume. It’s the right silhouette for the “young Elizabeth” that Victoria is trying to portray, it fits her beautifully, and I really like the fabric choices. Then this happened: 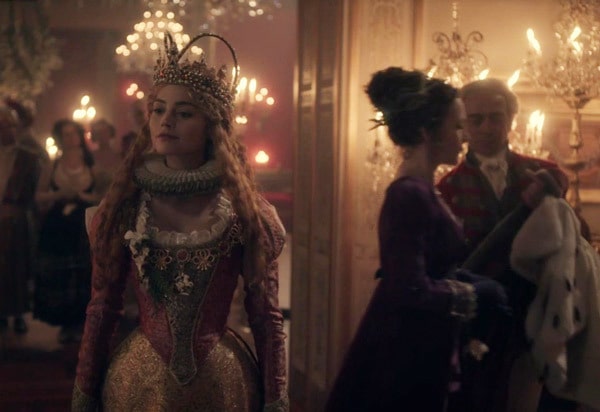 The overgown and ermine cape are removed, leaving Victoria wearing a bodice with a faux stomacher and a forepart. 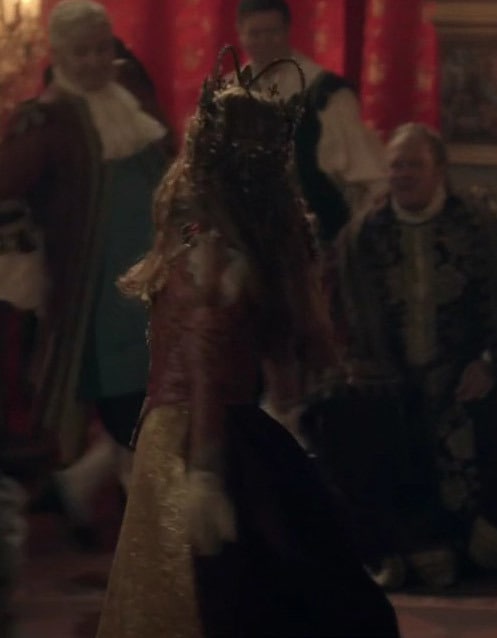 See how her skirt is only gold in the front and dark fabric in the back? That’s because it was never intended to be worn without an overskirt.

I’m not sure why this decision was made, other than maybe it was deemed that Victoria looked too covered-up in the full outfit with the overgown. It certainly obscures the little spray of flowers that she pins to her bodice and which are important to a conversation she’s shortly going to have with Lord M (who is playing the Earl of Leicester, natch) in which his gaze trails down over her décolletage, and she tells him “they’re very beautiful.” 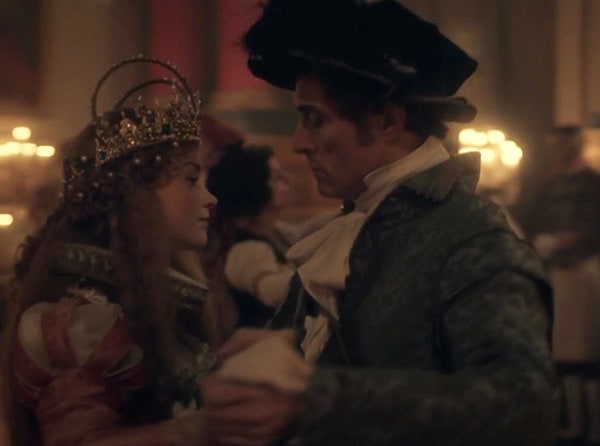 IS SHE TALKING ABOUT HER BREASTS OR THE FLOWERS??? HMMM.

The series costumer, Rosalind Ebbutt, had this to say about the costume in an interview with The Telegraph:

“It was a mixture of three different dresses we found at the costumier then we tried to copy the portrait of Elizabeth I with her hair loose, which features in the series.”

Ok, so it wasn’t custom-made for the series, I can deal with that. It looks great on Jenna Coleman, but I just wish they’d kept the overgown on! Or found another overskirt! Or something!

Alas, my desires were not taken into account. Whatever, I am not going to pout about it; instead I will close this post out by showing you all a bunch of images of one of Queen Victoria’s extant fancy dress gowns and paintings of other fancy dress costumes she wore in the early part of her reign. Because I love you. 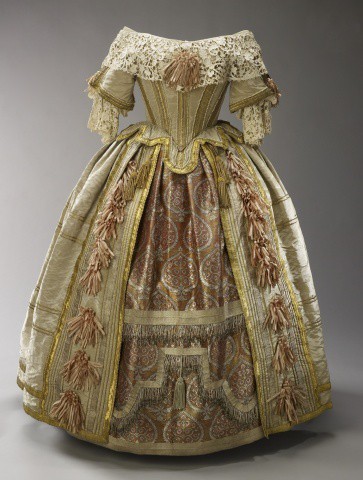 Designed by Eugène Louis Lami, this gown was worn by Victoria for the Stuart Ball, in 1851. Via The Royal Collection. 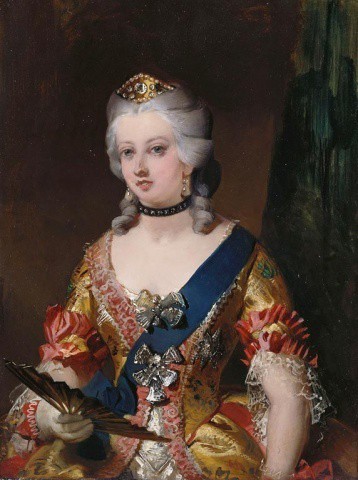 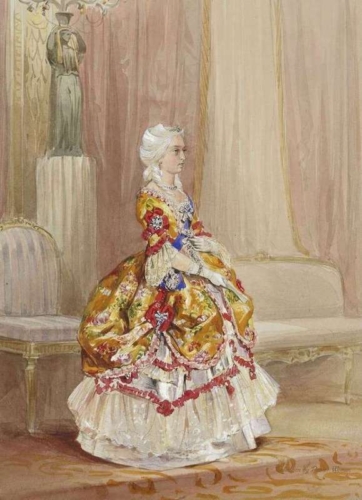 A watercolor by Louis Hague of Victoria at the 1745 ball.

And this portrait by Landseer of the Queen and Prince Consort in their costumes for the fancy dress ball in 1842: 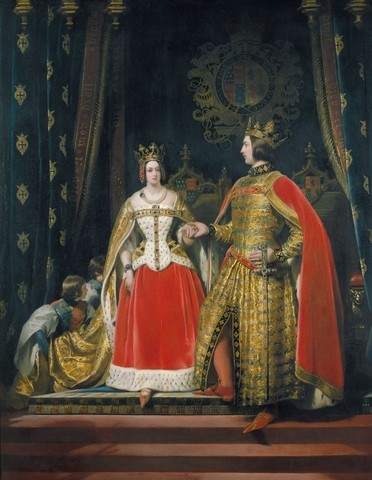 Sir Edwin Landseer, “Queen Victoria as Philippa of Hainault and Prince Albert as Edward III,” 1842. Via The Royal Collection.

What did you think of the fancy dress costumes in this episode? Share them in the comments!