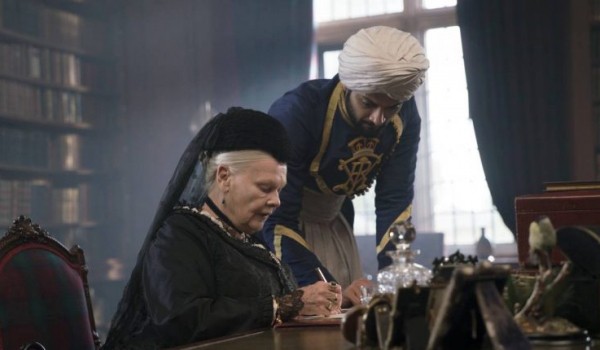 Watching previews of Victoria & Abdul (2017), the recent film about Queen Victoria and her friend and servant Abdul Karim, all I could think was “My mother is going to LOVE this.” I love ya, mom! But sometimes one can smell a mass-marketed, not-so-challenging movie from a mile away (note: my mom does like challenging stuff as well, but she’s a sucker for a film like this). Well, I was stuck on a plane with limited options and a nagging sense of duty, so I fired it up — and I was surprised to be entertained! Okay, so yes, my mother would indeed love it (and probably already has: “I love that Judi Dench!” — my mother). And yeah, it glosses over some difficult issues (Victoria is shown as a racial/cultural progressive while everyone else is a total racist, and I doubt it was that simple). But the film is well acted, the script is lively, Judi Dench sparkles, and the Oscar-nominated costumes are great — and not just a bunch of black sacks, either!

I’ll let you read up on the plot, should you so wish, and instead move to the costumes, which were designed by the fabulous Consolata Boyle (The Serpent’s Kiss, Chéri, Florence Foster Jenkins, and many more). I recently heard a talk by Lucy Worsley and other researchers from the Historic Royal Palaces, who are working on an in-depth study of Queen Victoria’s surviving wardrobe; one of the takeaways I remember was how, yes, Victoria did wear black after her husband’s death, but she used all kinds of textures, embellishments, and accessories to express her love of fashion — she didn’t just wear black sacks. I was really happy to see this aspect expressed in the film — Dench is dressed in black but with lace insets, trimmings, and interesting accessories, so there was lots of detail to peer at. Boyle told Entertainment Weekly:

I had a lot of conversations with [cinematographer] Danny Cohen about how to deal with all the blacks … it was about how to keep the blacks interesting so the story of mourning and sadness would be reflected in the three-dimensional elements of Victoria’s gown, and that was the way we told the story: we hopefully expressed the weight of [the Victorian era] on her body, and contrast that with the light, air, and exoticism of [Abdul’s] Indian environment.

…and the Hollywood Reporter:

I started with a very deep black, heavily embellished, and then very slowly and subtly, I would introduce very dark grays, dark purples or deep brown that almost read as black. Also you’ve got the technical problem of the ability to light black, so to give him as much laid-on texture so it’s not just a flat black. Victoria’s clothes are very heavily decorated, so that was a great help to give it texture. There was of course lots of gold and silver ornamentation. Then it got dark again as she felt her world closing in around her toward her death. I used color and texture very carefully to show the progression of their relationship. 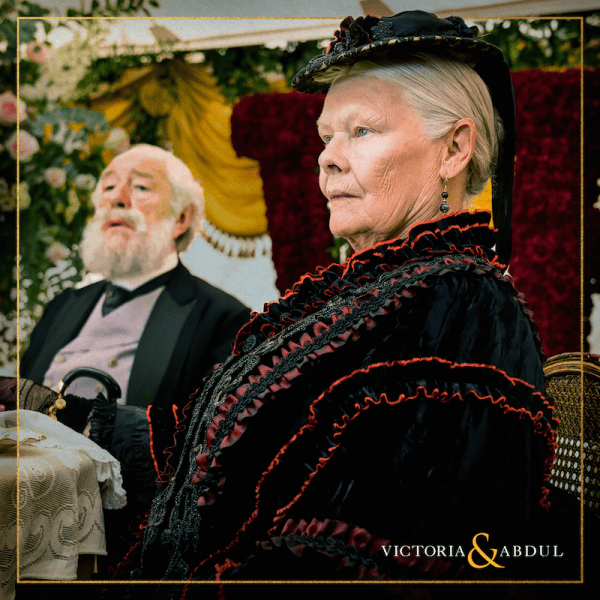 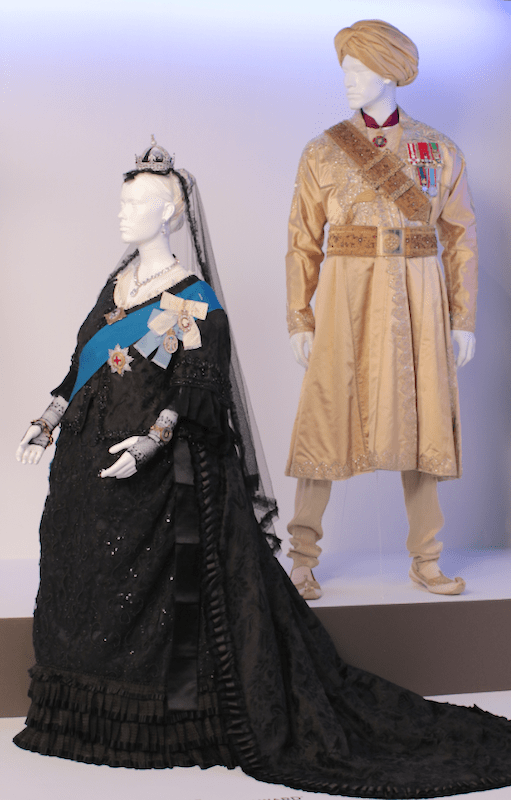 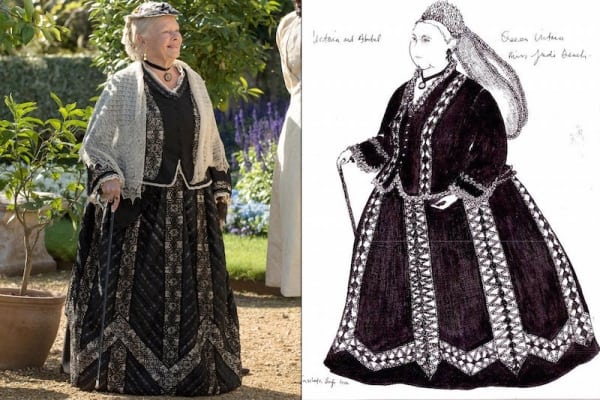 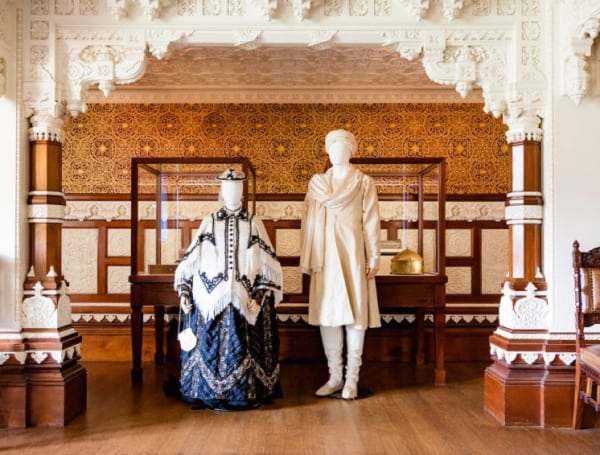 Victorians’ jewelry – and particularly Victoria’s jewelry – is very personal. Besides her ceremonial jewelry with all of the orders and the beautiful tiaras there is that sentimental element of the Victorians. She had her babies’ milk teeth inserted into earrings. I had a lot of jewelry made that was based on the jewelry that Albert had designed because they were very key, and she wore them all the time. And of course the jewelry of mourning, all that plaited hair and braided hair. I had brooches made of braided hair that she wore, the hair of her loved ones. All of this is so typical of that Victorian era. 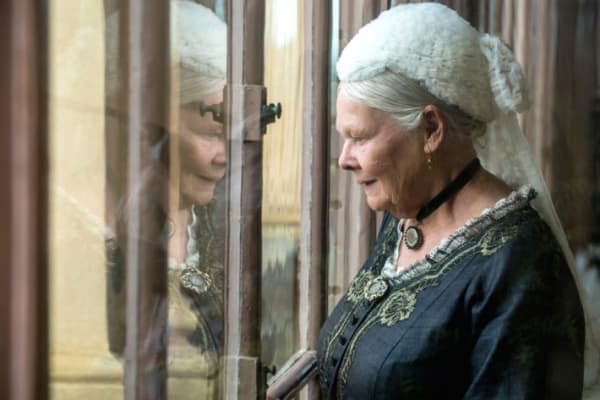 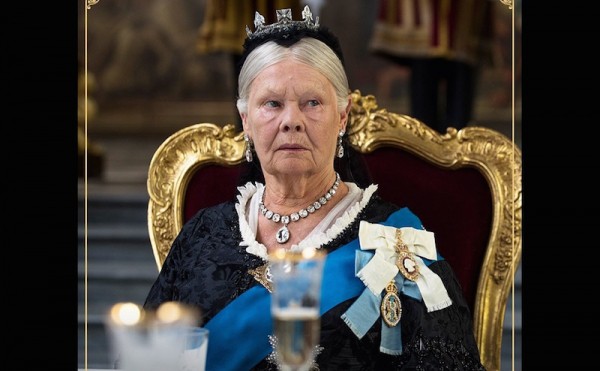 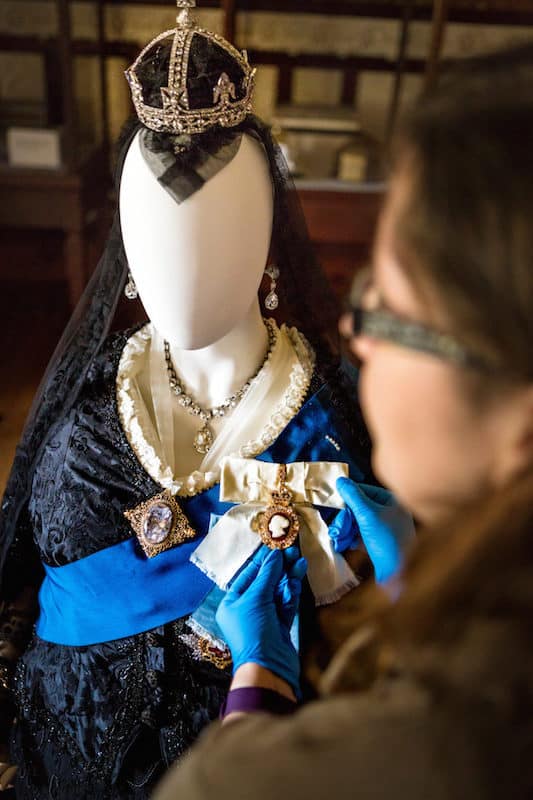 Abdul’s wardrobe is a definite plot point, as he’s given clothes to wear that the English have designed to suit their ideas of what Indian clothing SHOULD look like. Boyle told the Hollywood Reporter:

We see him as a simple clerk and that he travels to London and he’s chosen to put on this would-be royal uniform, which is like a concocted version of what an English tailor invented as an uniform. It’s a perceived Western notion of what a servant should look like. Also if you look at it, it fits in with the servants from the household itself, with the gold and embellishments. These uniforms, which were red silk for the day and blue silk for the night, had the royal crest, but they had the traditional shape of the chakra or what the tailors thought was a version of the chakra. 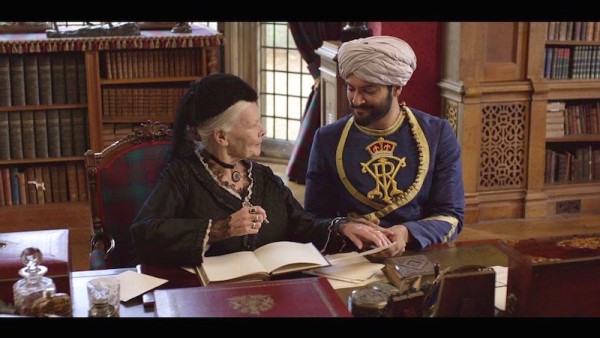 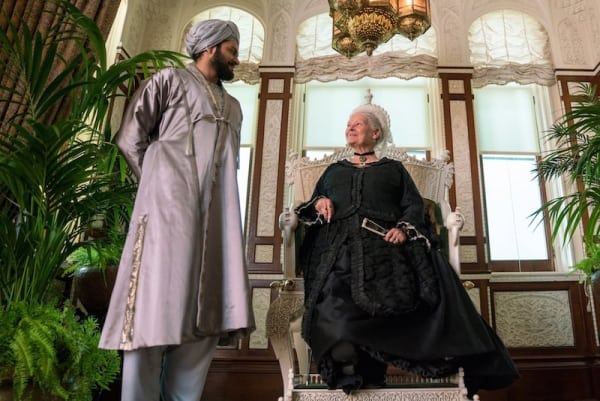 I was also really impressed with how well Boyle capture the look of the period. The film begins in 1887, and Victoria’s two main ladies in waiting (Jane Spencer, Baroness Churchill, played by Olivia Williams; and Miss Phipps, played by Fenella Woolgar), as well as other ladies of the court, look straight out of fashion magazines. 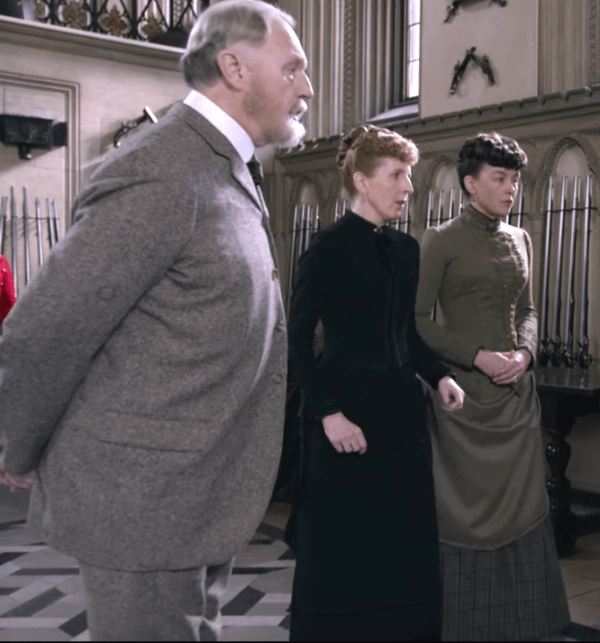 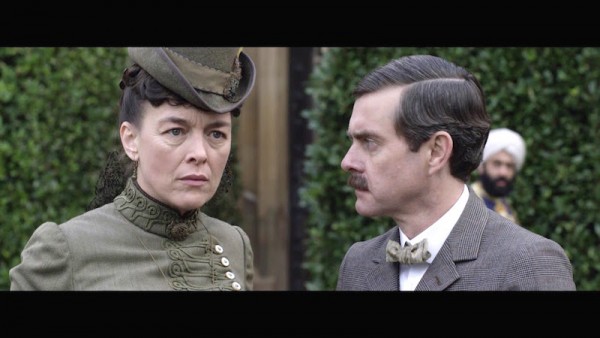 This dress worn by Baroness Churchill, is a differently-colored, near-exact copy of… 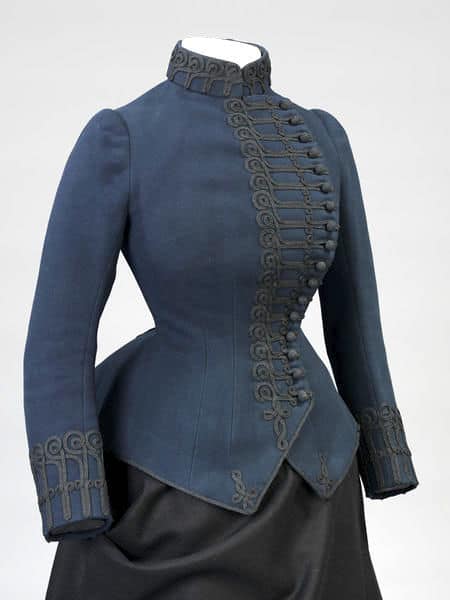 … this jacket at the V&A (yes, spotting these is one of my superpowers) | Riding habit jacket, John Redfern & Sons, 1885-6, Victoria & Albert Museum 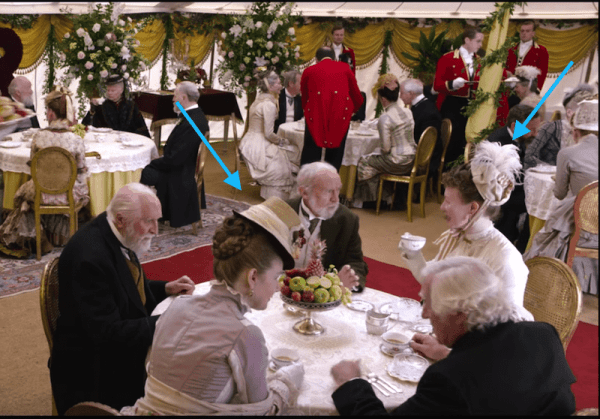 Notice the perchy bonnets and flower-pot hats, which look exactly like… 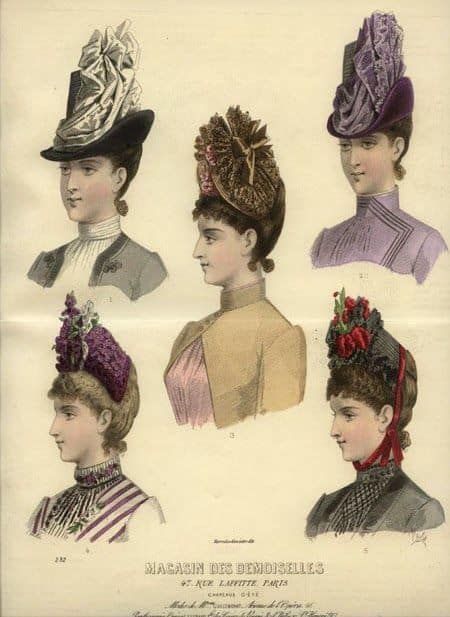 Note also the perfect updos, right on top of the head, with short, curly bangs (side note: Eddie Izzard as Bertie — genius casting!). 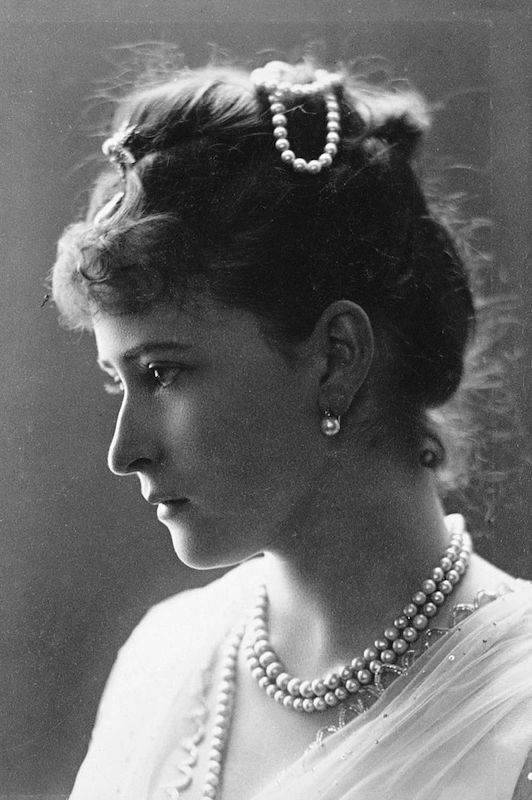 Again, spot on for the era! | Princess Elizabeth of Hesse and by Rhine by Hayman Seleg Mendelssohn, July 1887, Royal Collection

The main irritation I had is that the film moves forward in time, up to Victoria’s death in 1901, and none of these ladies’ wardrobes change a bit. There’s a huge difference between 1887-9ish and 1901. 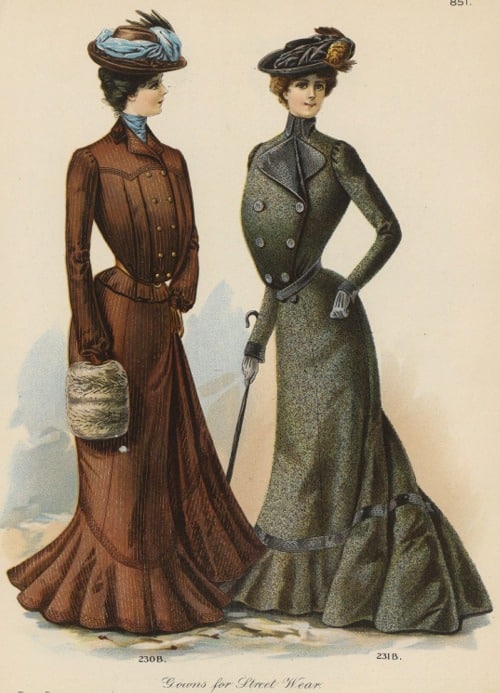 The other irritation was the horror of the formal dining scene, where a bunch of ladies in FABULOUS court attire… 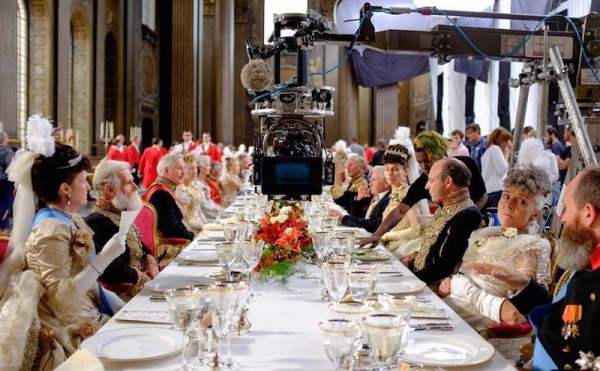 EAT WITH THEIR GLOVES ON. Apparently the historical advisor got the day off? Because, NO.

Have you seen Victoria & Abdul? Take your mom, and tell us what you think!