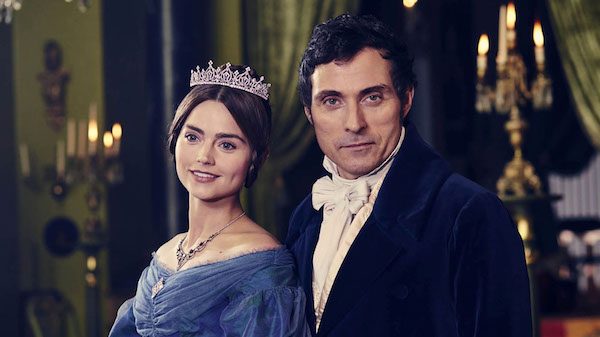 Guys! Usually we here at Frock Flicks review whatever it is we have been watching, which may mean that all three of us are writing content about the same film/show. But with Snark Week madness, we decided to split up some of the major shows on, and I volunteered to tackle Victoria (2017), the ITV-produced TV series starring Jenna Coleman as Queen Victoria (which is also airing in the US on PBS). This may have been a mistake, because aside from some tingly feelings about Rufus Sewell and the rest of the man candy, and liking the fact that they reproduced some real surviving clothing worn by Queen Victoria, I’m full of meh!

Now granted, this was probably poor decision-making on my part, because I’ve always been less than excited about Queen Victoria. As I discussed on our latest Patreon podcast (only available to those who regularly support Frock Flicks through Patreon!), she didn’t actually have too much of a political role. Plus, she was so domestic and family-focused. No flirtations or scandals or wielding of power like other fabulous British female monarchs like Queen Elizabeth I. I remember reading one of those Jean Plaidy historical novels about her back in my pre-teen days and just thinking “zzzzzzz.” Raise your hand if you checked this sucker out from your public library!

But hey, it looked like a lot of money was thrown at this production, and Jenna Coleman was good on Dr. Who, and Rufus Sewell! Right?

I’ve only managed to get through three episodes (i.e., right up to when Melbourne turns down her proposal) before getting distracted by Westworld (post coming soon!) and Crazy Ex-Girlfriend. Here’s what I got: I felt like they could have done a much better job establishing Victoria’s childhood. Instead of doing ANY showing of the abuse she suffered by her controlling mother and mom’s beau, we just hear Vickie complaining about them post-out-from-under-their-thumbs. Can someone who cares more about Queen Victoria tell me if there is ANY documentation that she basically proposed to Lord Melbourne? I mean, I know she had to do the proposing to Albert due to her higher rank, but my understanding is that it was pretty well known that he was going to say yes. I just don’t see Vickie going out on a limb like this. I believe I audibly scoffed when Victoria gets excited about new lady’s maid Miss Skerrett and her ability to change her boring, butter-churny hairstyle into a supposedly new and fashionable, but equally boring and butter-churny, hairstyle. This is somewhat less of a snark of the show and more of 1840s hairstyles. Apparently at some point in the future, she adds some ringlets, which, THANK GOD. I was entertained by the whole Lady Flora thing. “You think I’m pregnant and a hoooor? I HAVE CANCER!” Ultimate revenge. As I do with all mid-Victorian fashion, the only outfit I’ve gotten excited about is her green riding habit. I was underwhelmed by the coronation, but that could just be my bad memory. Except, if I don’t really remember it, that says something. Question for Sir John: did they really have that much botox in the 1830s? I like the Duchess of Kent’s dress, but I feel like her gloves came from Frederick’s of Hollywood. WHAT IS GOING ON WITH MOM’S HAIR OMG NO BUMP-ITS DID NOT EXIST IN THE 1830S-40S. Also, that “tiara” is totally from Claire’s (cheap American mall jewelry shop). I know I’m not the only one freaked out by Coleman’s space alien contacts. Okay, so apparently it’s important to someone that her eye color match, but Coleman’s pupils never dilate! Some of the costumes are great repros… …and some are pretty. I am looking forward to seeing the wedding dress, which looks gorgeous! But apparently I get to look forward to dupioni… And is that head…couch trim? Their attempt at Renaissance fancy dress gave both me and Sarah ALL the feels. One of us will write a ranty post about it very soon.

I don’t know, people. How are YOU feeling about Victoria?