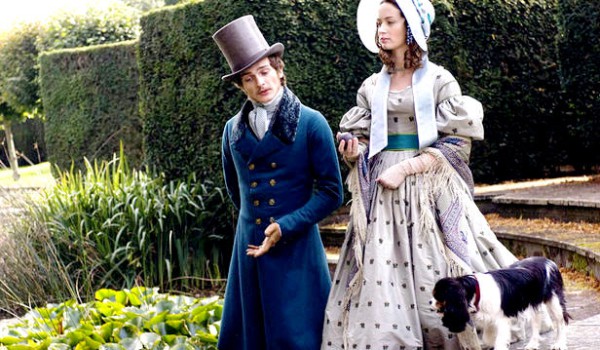 With a new season of the Victoria miniseries returning to PBS, it seems timely to do a more in-depth review of The Young Victoria (2009). Starring Emily Blunt as Victoria and Rupert Friend as Albert, the Oscar-winning costumes were designed by Sandy Powell. While this movie is technically a biopic of the historical Queen Victoria, taking place in the years immediately before and after her coronation in 1838, some liberties were taken with the historical events coughAlbertGettingShotcough for dramatic purposes. To me it feels more like a historical romance and I like to watch it when I need some eye candy and a feel-good type of film. Overall, it’s an entertaining film with a nice romantic story and gorgeous costumes.

This review got really long really quickly, so it has been broken up into two parts. Part one looks at Victoria’s maturation as it is reflected in the costumes as well as the historical fashions and real clothes that inspired Sandy Powell’s costumes. Part two deals with other interesting and noteworthy things going on with Victoria’s costumes as well as a quick glimpse of the costumes of other characters.

Everyone is beautifully clothed in this film, but I’m going to focus specifically on Victoria for one good reason: after keeping tally of all the costumes that Victoria alone wears (including when she’s a girl and her nightgowns and underwear, but not including the various iterations of costumes that are worn more than once), I came up with approximately 35 ensembles. So to keep things manageable, I’m focusing on Victoria’s outfits here, even though the Duchess of Kent (played by Miranda Richardson) and the Dowager Queen (played by Harriet Walter) both have some spectacular looks.

In an interview backstage at the 82nd Academy Awards in 2010, Powell talks about how she had to give up her preconceived notion of Queen Victoria as old and frumpy: “I didn’t know that she actually was vibrant and attractive and a real character, you know, she was a real headstrong, even tomboyish woman.” Victoria is costumed in vibrant colours that really set off Blunt’s looks. What we see in the film is a transformation of Victoria, moving from her life as a young girl with little control over anything into a powerful young woman and monarch, as well as wife.

Conveniently for Powell, the fashions of the era from the 1830s to the 1840s actually do this visually. Fashions of the 1830s were rather juvenile and doll-like, with shorter skirts and very elaborate curled hair, while things because much more restrained in the 1840s, especially the sleeves, but also the sleeker hairstyles. While the film deals specifically with the years 1837-1840, the look in the film seems a bit broader, more like 1836-1844. Just for comparison with the movie, here are some fashion plates from 1837 and 1843. 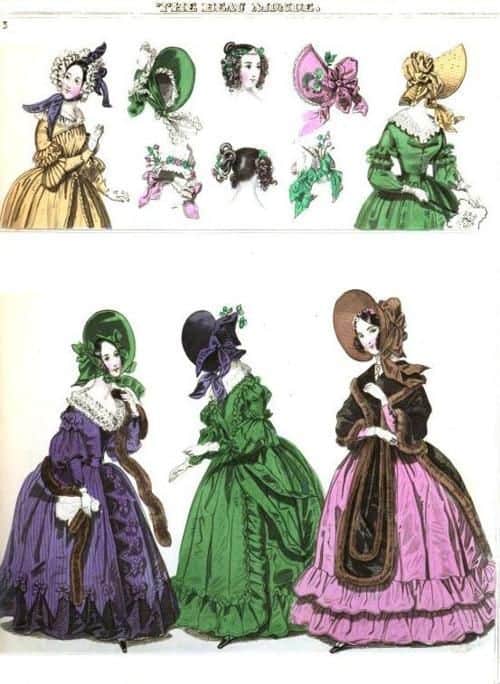 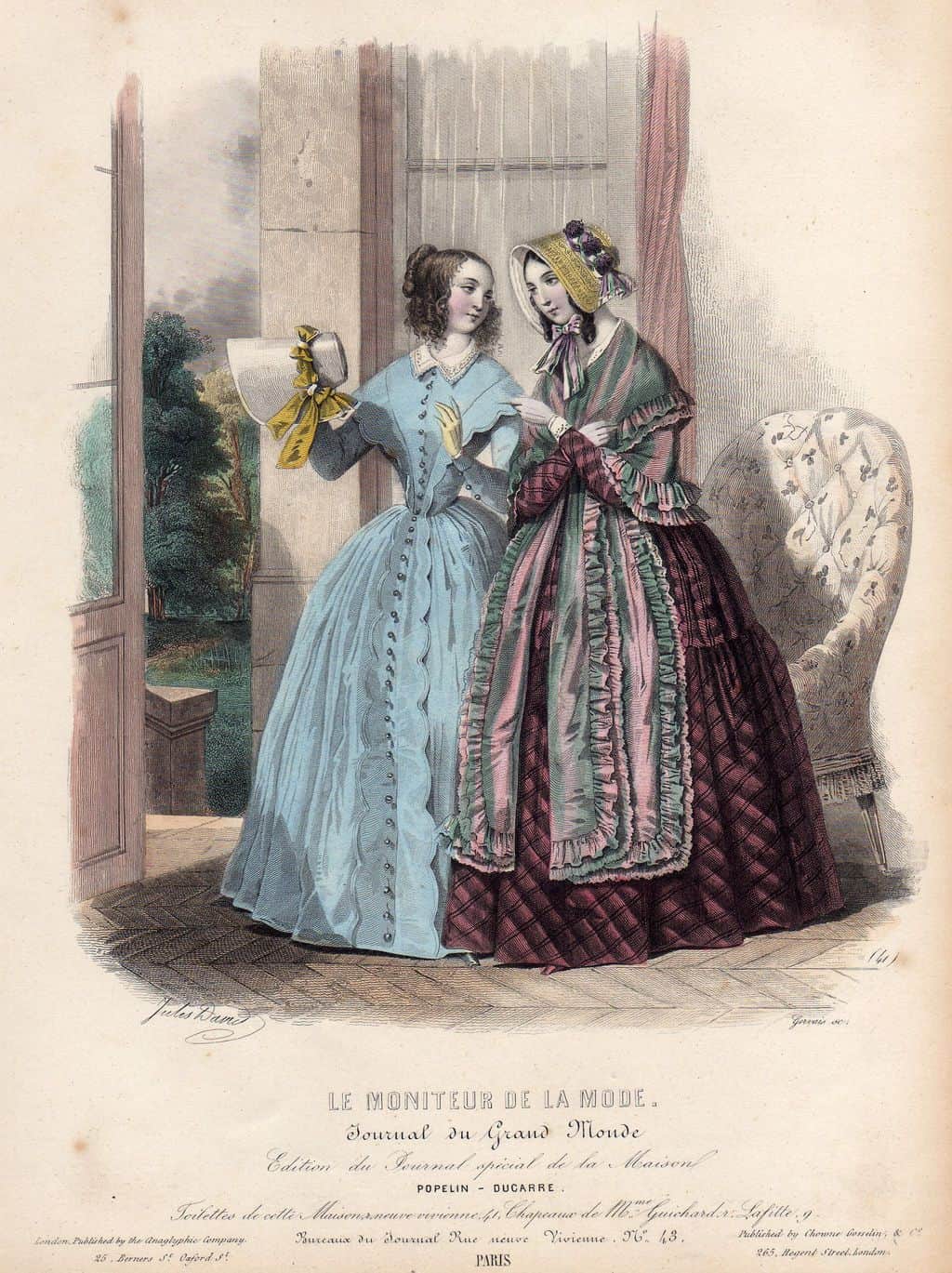 When Victoria is young, she wears a lot of pastels like pink, yellow, and light blue, as well as a lot of ruffles, lace, and ornamentation. The waists of her bodices are rounded, even though by this time a point had come into fashion. Her dresses frequently have sashes with bows in front and her front hair is usually curled, emphasizing her youth. When she goes to her uncle the king’s birthday she’s dressed in a frothy yellow dress with sparkly white lace. 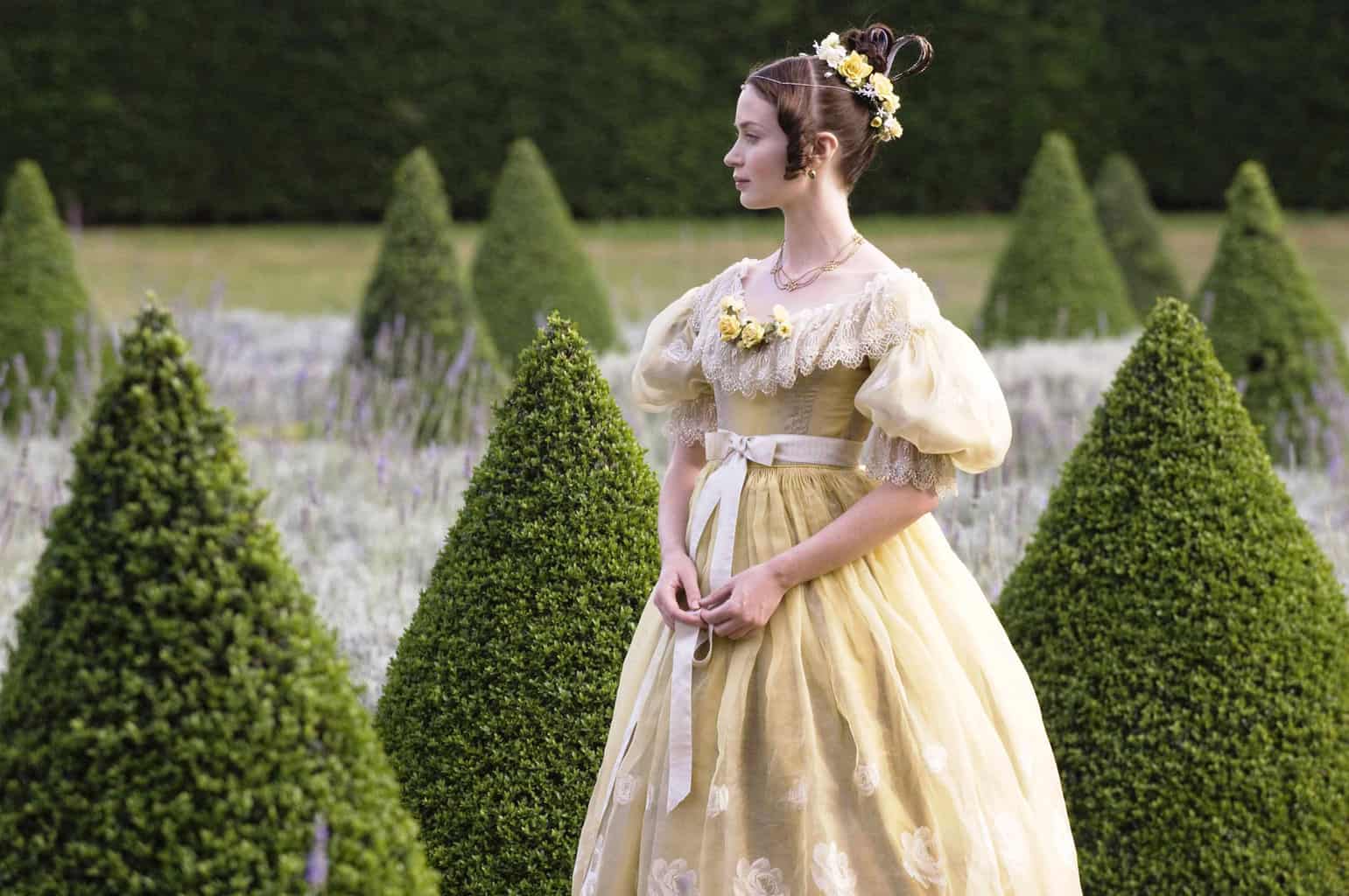 While drawing her puppy Dash, she wears a pale silvery blue dress and long curls in her hair. Maggie of The Costumer’s Guide actually owns this gown (or one of the copies of it made for filming), which can be seen here in more detail. 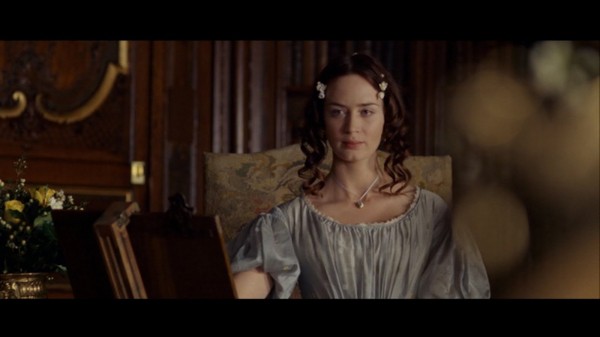 When she is seen at the opera and when she plays chess with Albert during his first visit, she wears this silvery striped sheer over blue, with silver and blue lace. 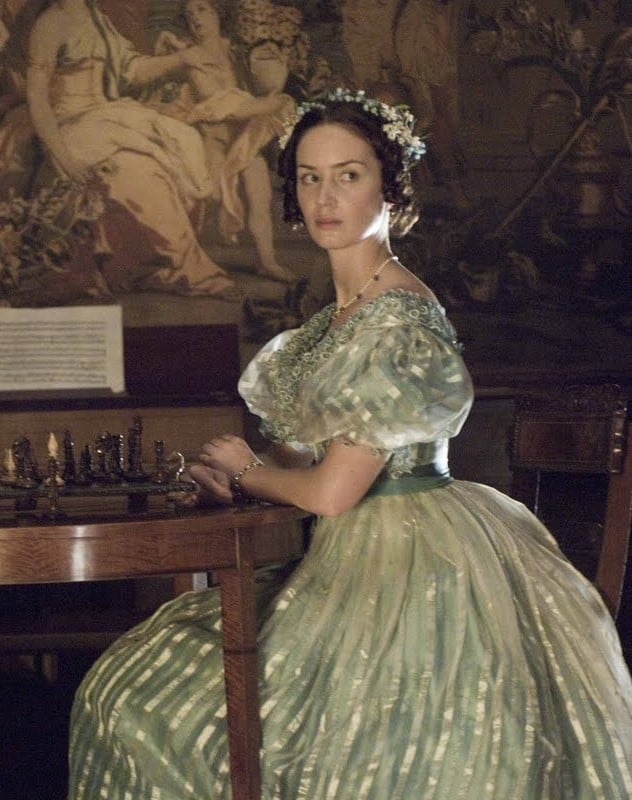 In the early days of her reign, the colour palette changes slightly and the styles become less childish. She also wears mourning after learning of the death of the king. She wears a dark purple gown with scalloped lilac trim to visit the Abbey before her coronation. 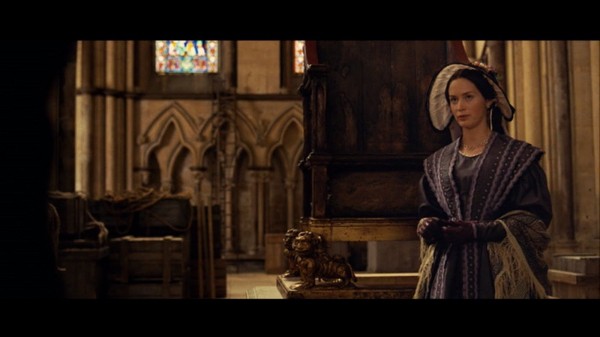 She also wears a lot of grey and taupe dresses that have pops of colour, a sort of mix of the early silvery dresses and the later vibrant dresses. 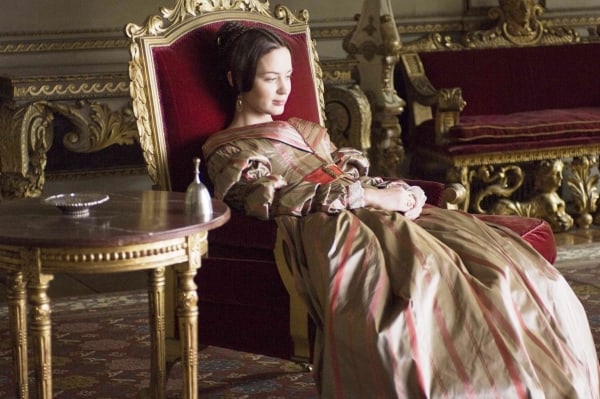 At her coronation ball she wears a golden dress that hearkens back to the dress she wore to the king’s birthday, but it’s a deeper golden yellow and trimmed with red roses and a lot less lace. The curls disappear and her front hair gets much sleeker. 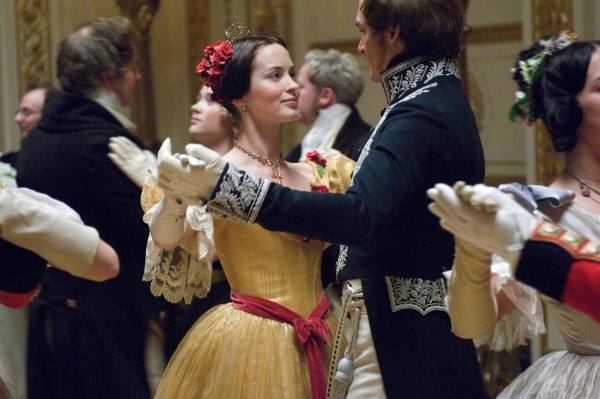 Toward the end of the movie, when she is established as queen as well as a pregnant wife or a mother, she wears much darker and more assertive colours. The waists of her dresses are pointed, reflecting the shift in fashions to the long pointed bodices that would be in style for the next two decades or so. Volume in the sleeves decreases and eventually disappears. She wears this periwinkle blue evening gown when she has a big fight with Albert over who is in control of her household. 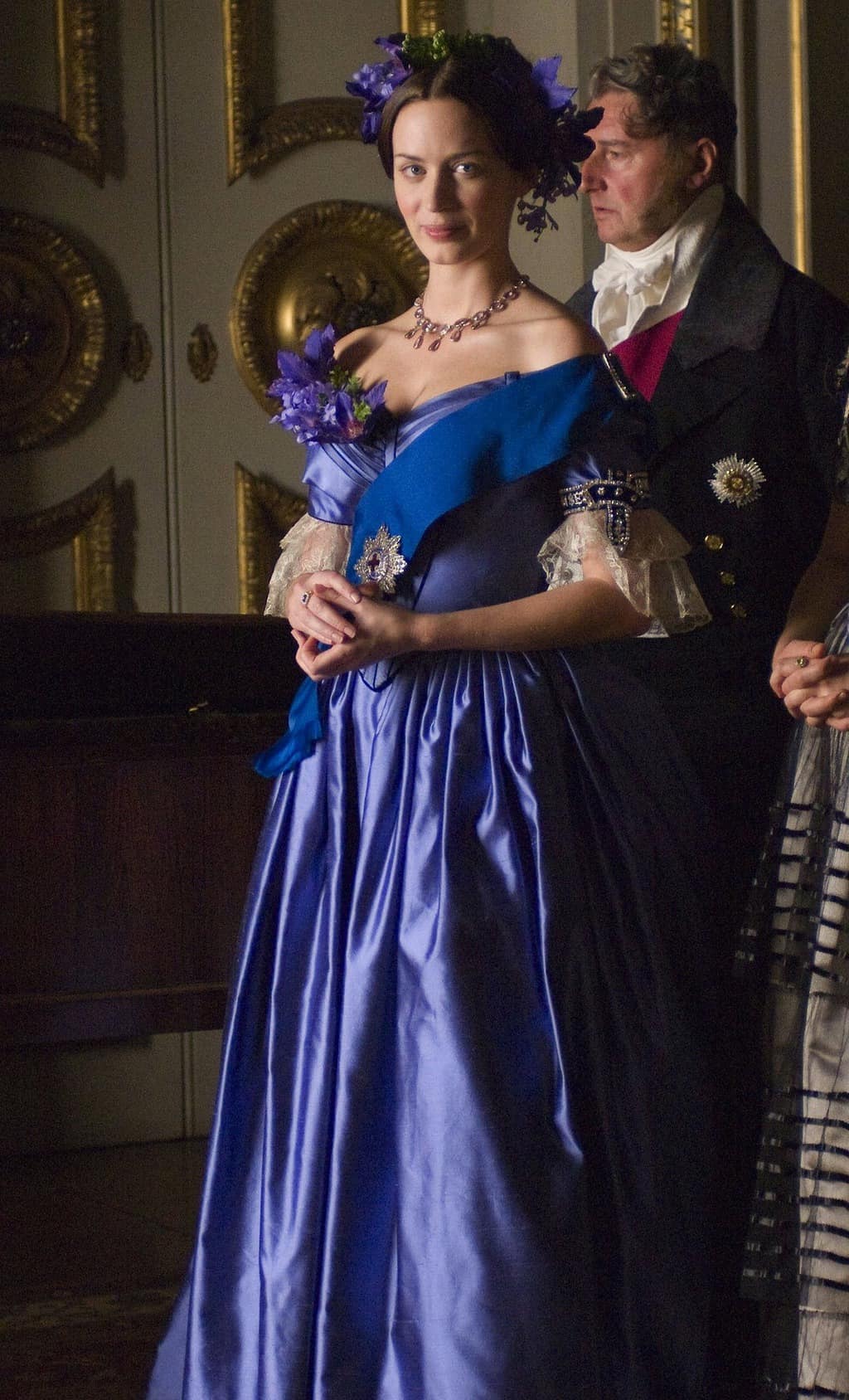 And at the end of the film, when she’s holding her first baby, she wears a dark red dress with tight sleeves trimmed with green dress, emphasizing the fact that she is now officially super grown up and mature with a child and a reconciliation with her mother and everything. 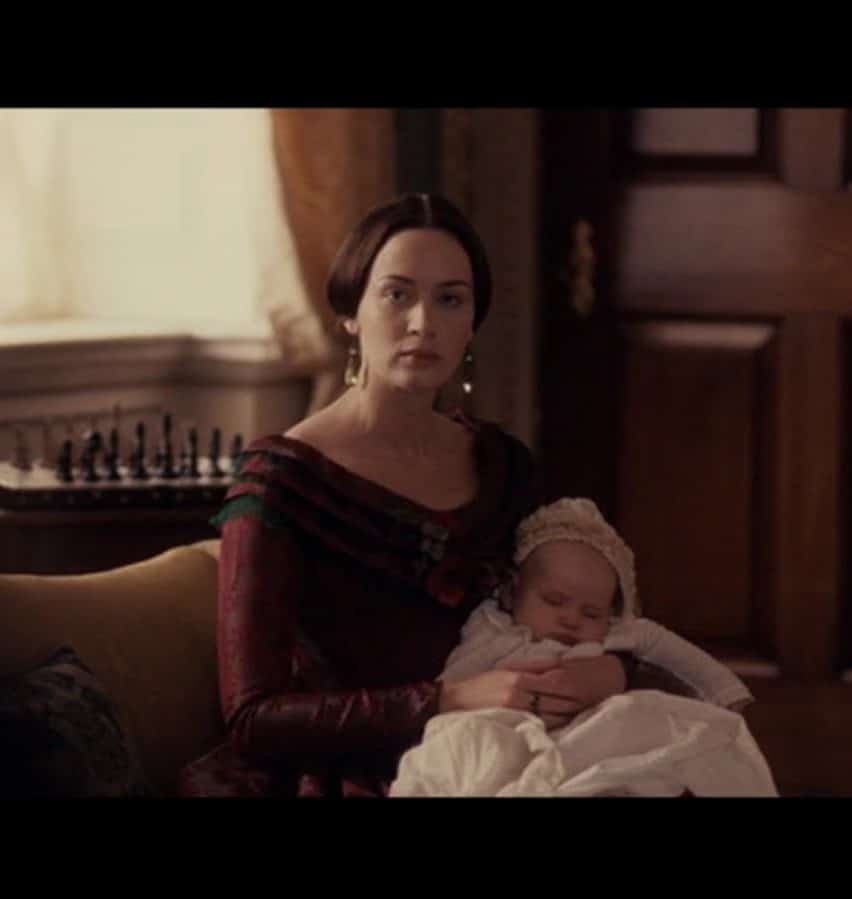 Powell was able to use historical items of clothing housed at Kensington Palace for her research. In an interview in Clothes on Film, Powell describes doing firsthand research there: “This visit was particularly useful and inspirational, especially as we were allowed to handle the clothes. It was remarkable to note how tiny they were.” Extant and well-documented dresses that were clearly copied by Powell include the dress for Victoria’s first Privy Council meeting, her wedding dress, and her coronation dress. 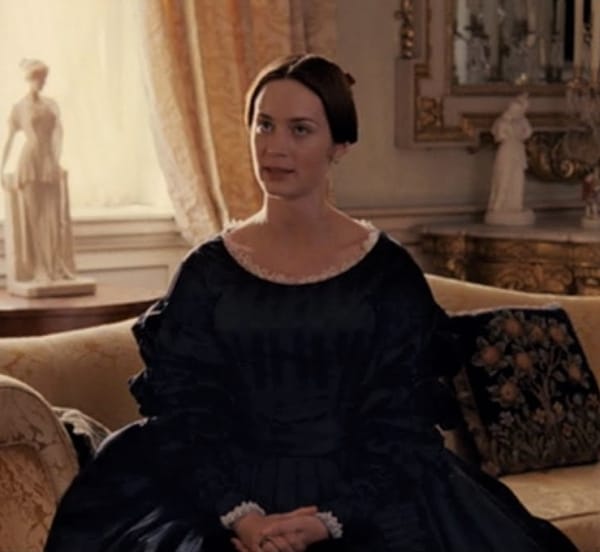 The Clothes on Film interview also quotes Powell as saying that the coronation gown was the most difficult one to make. 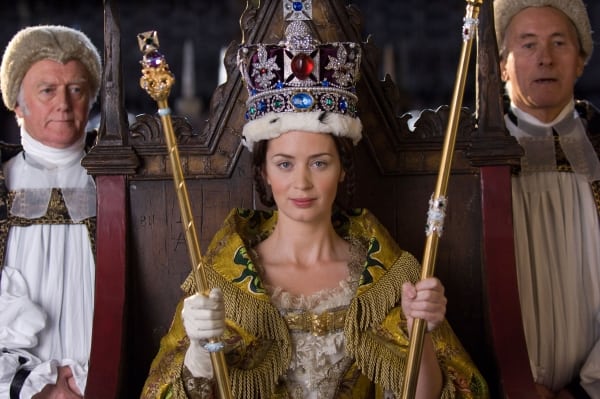 That’s it for my look at things to do with time in this movie, whether the passage of time in the story or the historical time period. Stay tuned for Part Two, when we explore some of the interesting and unusual details of Victoria’s other costumes.

What’s your favorite of The Young Victoria‘s costumes?