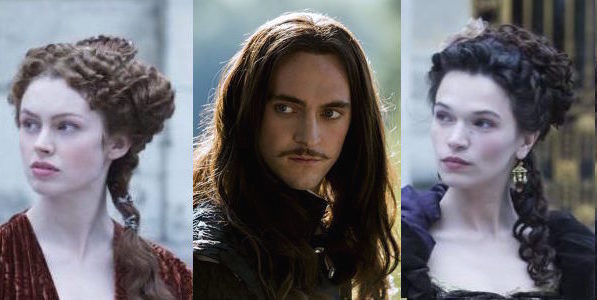 If you’re watching Versailles, the BBC series set at the late-17th-century court of Louis XIV of France, you can’t help but notice the hair. As Frock Flicks’s resident hair expert, it’s my moral duty to weigh in on all these long, flowing locks and intricate updo’s. My verdict? Not half bad, leaning towards pretty darn good!

The first season of Versailles is set in 1667, so we’ll focus in on that year, although looking more broadly at the 1660s-70s for larger context.

Wigs as a fashion accessory have come in and out of fashion periodically. For the late 17th century, the fashion leader appears to have been Louis XIV himself: most sources indicate that he wore his own hair long, but when it started to thin, he took to wearing wigs instead. Courtiers wore wigs in order to mimic Louis’s hairstyles, and when Louis swapped to wigs, they really became de rigeur. When exactly Louis switched to wigs is unclear — I’ve read conflicting dates, such as 1658 (The Fabrication of Louis XIV) and 1672 (Louis XIV: A Profile).

“Louis XIV had thick hair. When he started losing it, he wore wigs scattered with his real hair. Exuberant wigs came a bit later, in the late 1670s. They are higher, curlier and even horn-shaped for men. Maybe for season two!” (Madeline Fontaine on Designing Costumes for French TV Series ‘Versailles’).

Either way, the fashion in the 1660s was for looooong, curly hair, frequently with bangs/fringe over the forehead. It appears that most men wore a center part, although it wasn’t very defined. By the 1670s, the hair was getting high in two peaks on either side of the center part on top of the head, but there are definitely still men wearing less exaggerated styles. 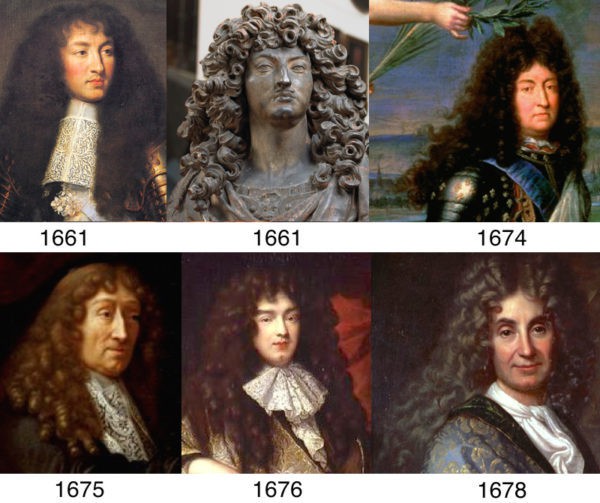 A sampling of French upper class men’s hairstyles, 1661-78, all culled from Wikimedia Commons.

The backs of men’s hairstyles in this era are deceptive — I think most of us would look at all those curls in front and just think it was a “natural” look. But instead, the few images I’ve managed to find show some interesting details, like hair that is straighter on the back crown of the neck, or one or more sausage curls at the center nape of the neck. 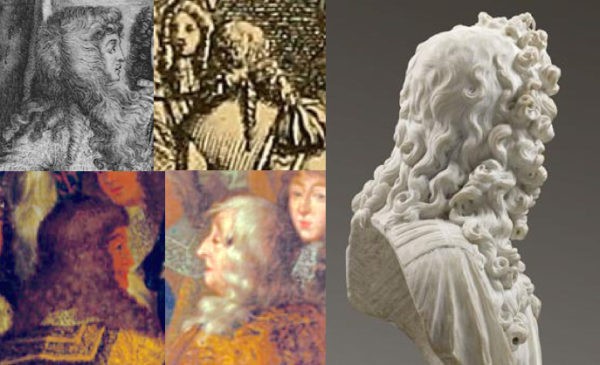 Now, let’s look more specifically at the characters of Versailles and compare them to the overview above and some specific images of the real person. 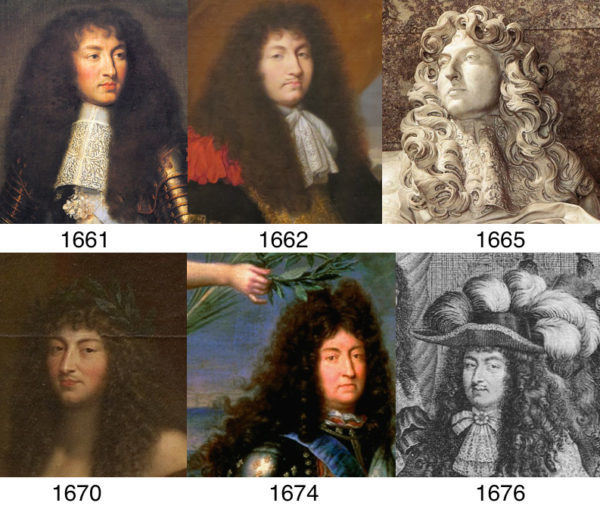 On the show, Louis is long, silky, defined center part, and slight wave. Okay, so I feel like going with long hair gets them 75% of the way there, with a bonus 5% for the center part, even if this just screams “modern lace-front wig.” Yes, the nitpicker in me misses the super curly-ness and the fringe, but I can live with it.

Louis’s brother Philippe pretty much went Team Louis in terms of his hair, although he seems to have preferred even tighter curls: 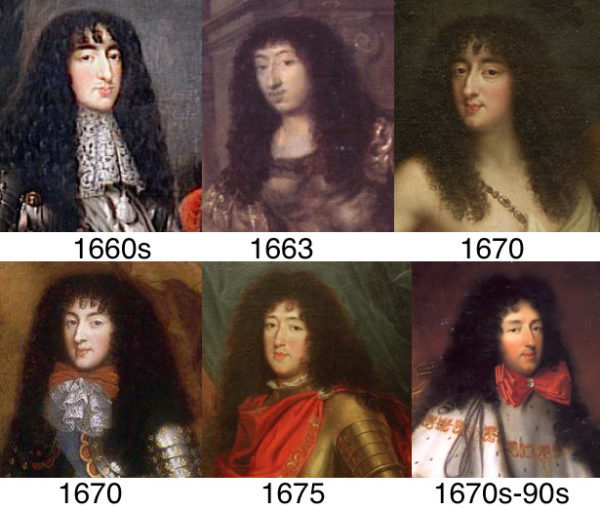 On TV, Philippe still copies his brother and goes just slightly curlier, which is right on target. 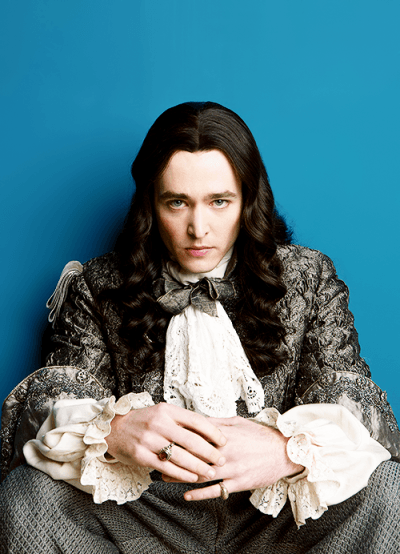 Philippe’s boyfriend was down with the team, although he seems to have liked less fringe: 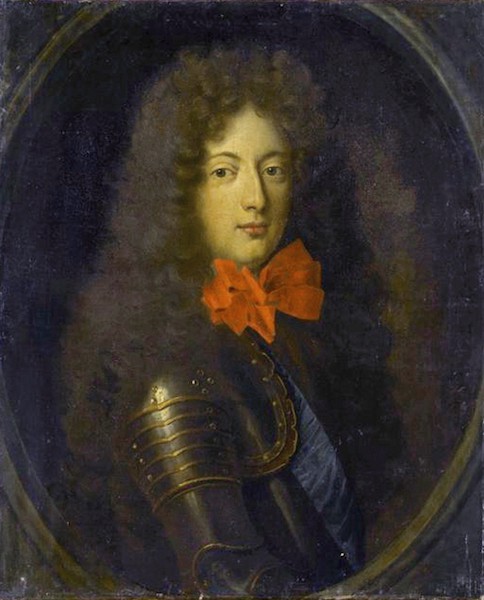 On screen, he’s curlier than most of the other boys: 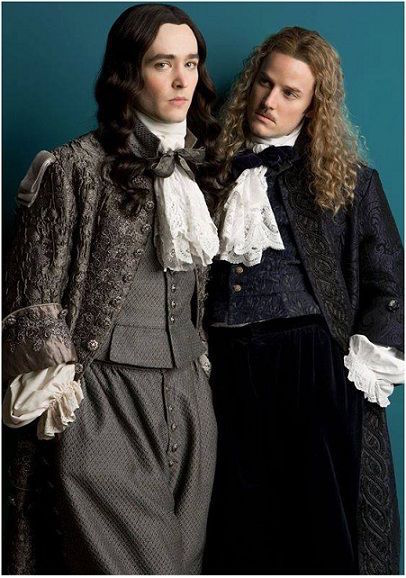 There’s a lot of other guys wandering around Versailles. Just touching on a few: 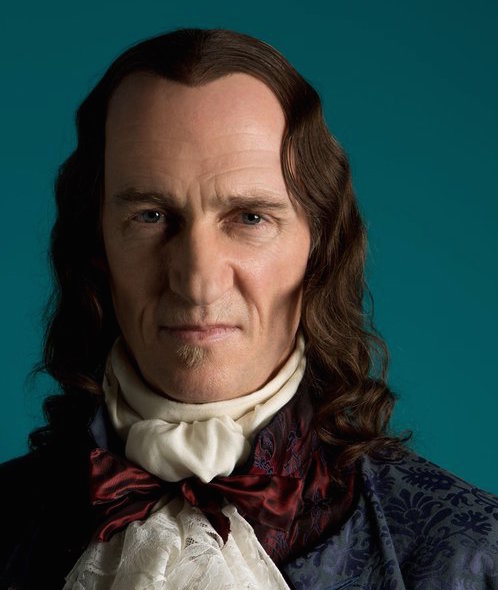 Louis’s main servant, Bontemps, rocks the 1920s-30s Marcel wave. I’m sure it’s to keep his hair out of his eyes, but it’s awfully arch. 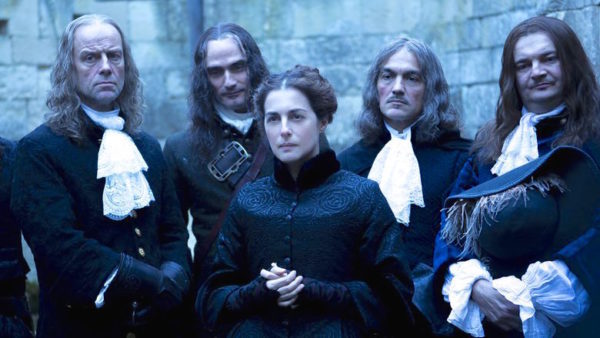 There’s a decent amount of variety on the courtiers’ hair… 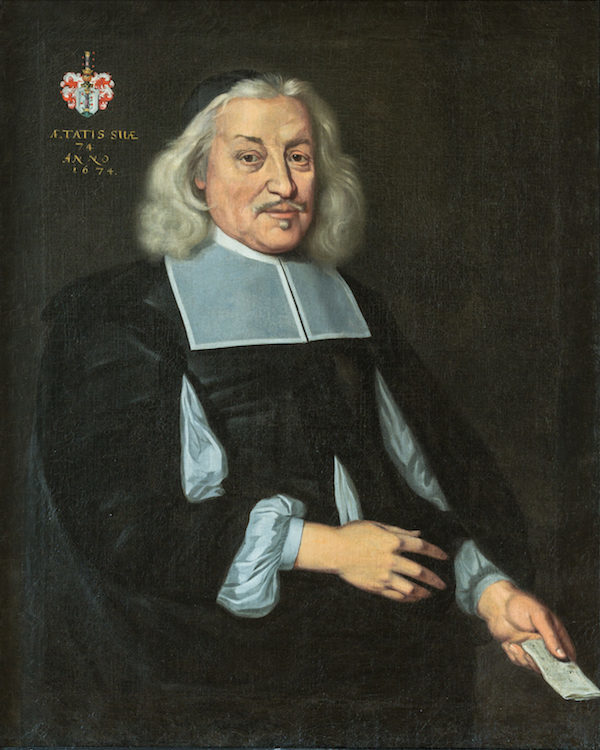 Which pans out when you look at period sources — not everyone was in full Louis XIV hair. 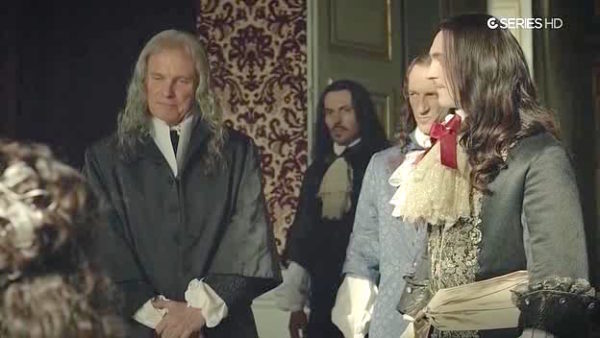 At first I was raising my eyebrows at the guys with straight fringe/bangs, like the doctor. 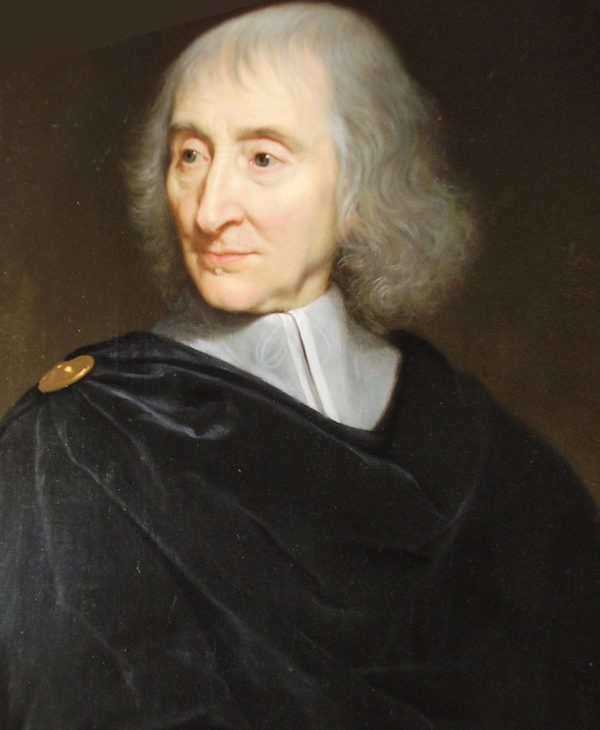 But then I found this guy, so clearly my eyebrows were in error!

HOW these guys refrain from tucking their hair behind their ears, I have no idea. But even more importantly: 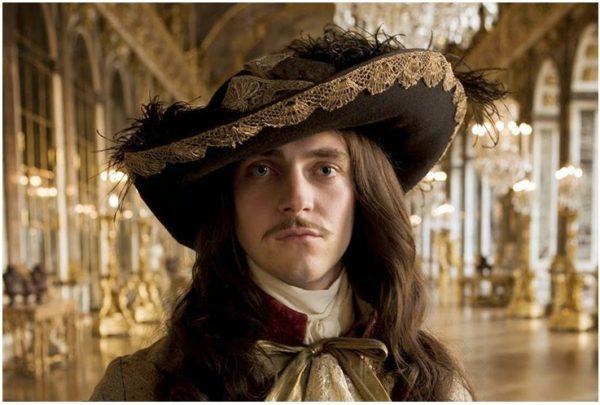 Really, what ALL the men (except the guards) are missing are HATS HATS HATS.

Now let’s look at the chix! The 1660s-70s was an era of updo’s for women (as were most historical eras, contrary to most filmmakers’ opinions). The mid-17th style (seen in the first image below) was for hair pulled back smoothly on top of the head into an arrangement at the back of the head, and then hanging curls on the sides of the face, with a bit to a lot of width to them. Often there was a very thin line of short curls framing the face. By the 1660s, that smooth top had worked into the wide curls, and you see women with what is often called “spaniel curls,” with a center part and shorter (cut? looped up?) curls arranged with width around the sides of the face. Styles were frequently accented with long curls hanging from the nape of the neck, which often fall forward over the shoulders. 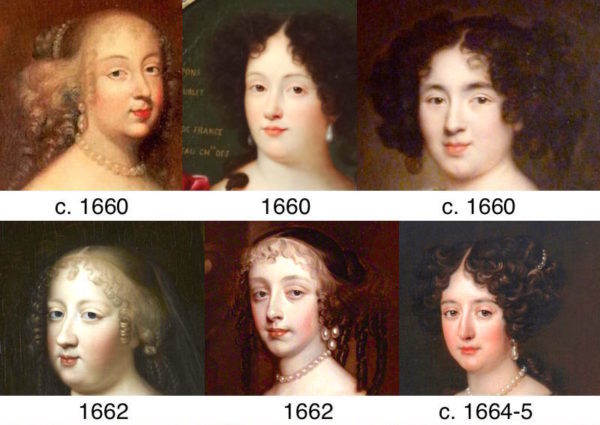 From the mid-1660s into the 1670s, that trend only continues. You still see some styles based on the more mid-17th century look, but more and more it’s about wide curls on the sides of the face — but note that the silhouette moves up, so that the width is more at the sides of the forehead than around the ears. 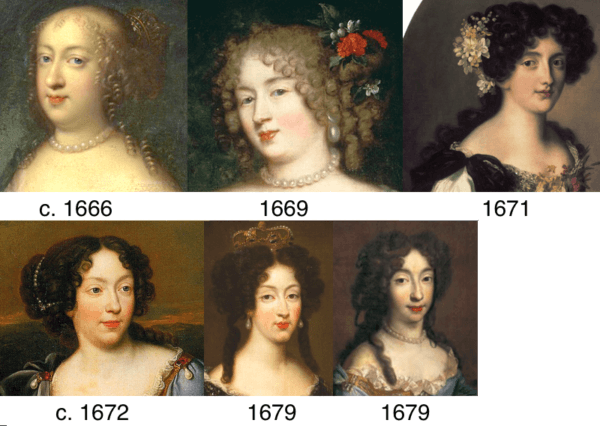 It’s always harder to find images of the backs of period hairstyles, since most people were painted from the front. Two images I’ve found show a clearer idea of what’s going on back there, with twisted loops, buns, and braids. 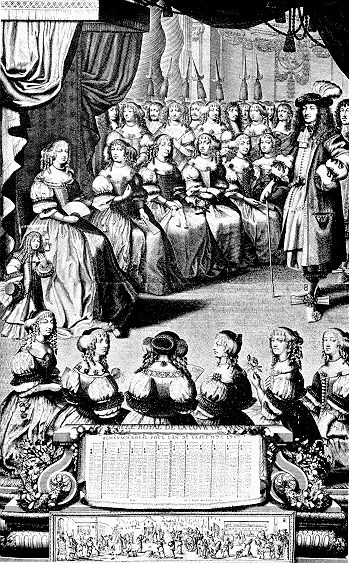 A ball at the French court, c. 1660s. Note the full twisted loop on the centermost front lady. 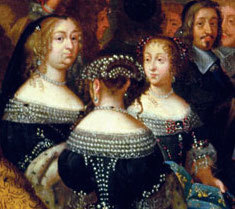 Detail from a portrait of Louis XIV’s wedding. The lady with her back to us has a complex arrangement on the back of the head that appears to be accented with tons of pearls.

Louis’s somewhat dowdy (in real life) queen transforms on screen into a fashionable beauty with her high, curly do’s. She’s got that width around the sides of the forehead thing typical of the 1670s, and the neck ringlets too.

Real-life Marie-Thérèse seems to have been much more old skool: 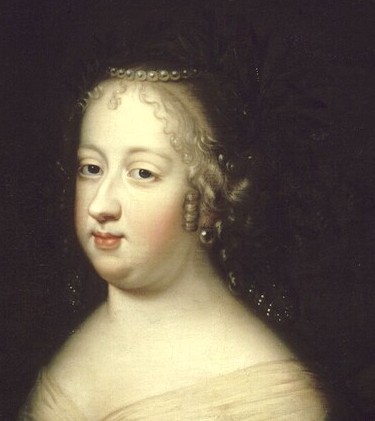 Detail from Anne of Austria with Queen Marie Thérèse by Saint-André, 1664. Palace of Versailles.

Philippe’s wife/Louis’s lover (according to the series) has a very similar hairstyle to Marie-Thérèse. I’m really happy with these, even if they lean more towards 1670s than 1667. 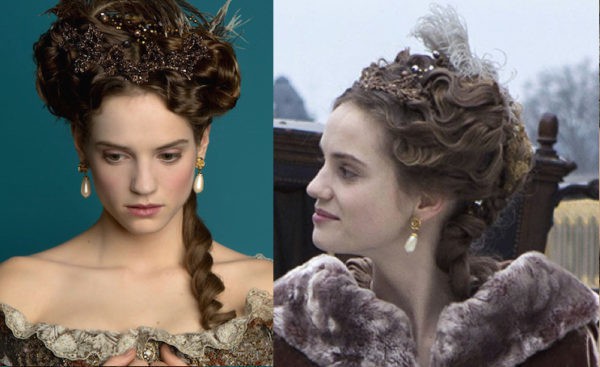 Henriette. They’re doing a good job with blinging the hair, too, even if it occasionally looks like some kind of Christmas decor stuck in there.

The real Henriette seems to have been a bit more traditional, however, keeping that fringe around the face and the smooth top to her hair. 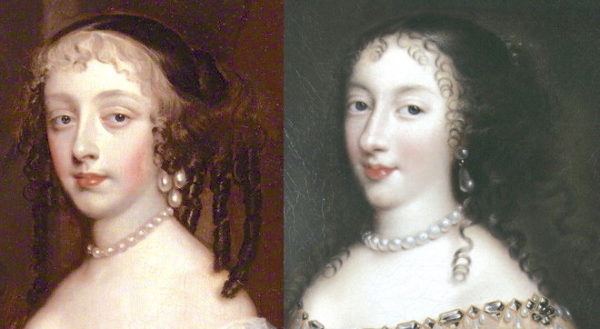 Rocking the same style as the previous ladies, although the width of her hair is more around the ears, which is more 1660s-appropriate. 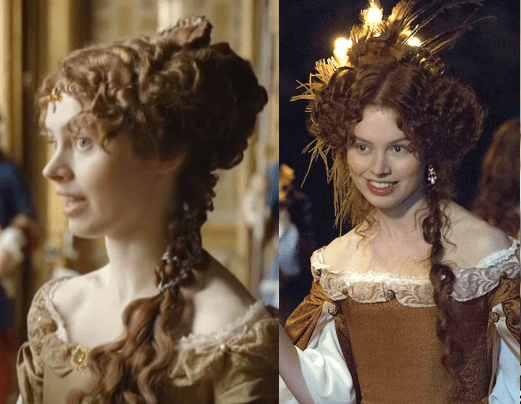 Louise. I really like the braided crown and braid-into-ringlets on the left.

The real Louise appears to have to have favored a softer version of the mid-century style, although both of these images seem a bit allegorical rather than walking-down-the-street: 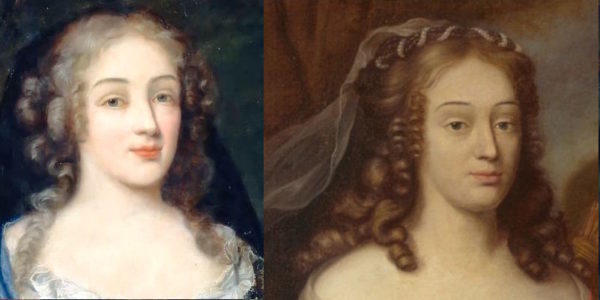 Louise by Nocret (third quarter of the 17th century) and After Lefèbvre (1667).

I’m pretty sure this courtier is a fictional character. Her hair is probably the most extreme in terms of width, which seems spot-on… except there should be some hanging ringlets from that side pouf. Otherwise, it needs to move up a bit to be the 1670s silhouette. 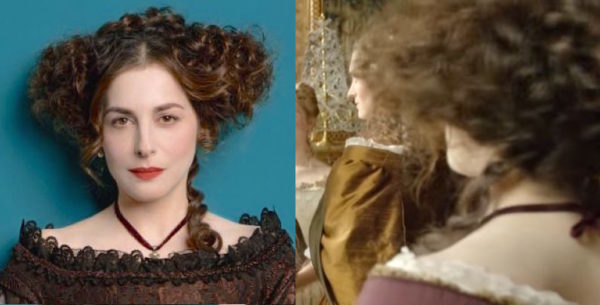 I’m thinking the wider the hair, the bigger the schemer, eh?

Again, a fictional character. I like how intricate her hair is, and it’s reading super 1670s to me.

Pretty thing for dangling in front of the king!

We haven’t seen too much of this character so far, but trust me, she’ll be important. I really like her hair, although it’s reading much more like a 1740s-60s tête de mouton than anything else… but it still fits the look of the show enough that I’m not stressed about this.

It’s those curls that go perpendicular to the face, around the hairline, that are so tête de mouton/18th century.

The real Athénaïs also seemed to prefer the mid-century style: 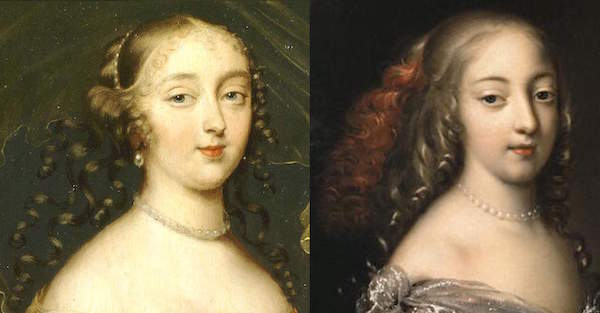 Athénaïs, Marquise de Montespan by an unknown painter (second half of the 17th century) and by Beaubrun (c. 1660).

Whoever “The Forge Sydney” is, thank you for this faux “Versailles hair” commercial:

Versailles Hair from The Forge Sydney on Vimeo.

What do you think of the hair and wigs (or lack thereof) in Versailles?