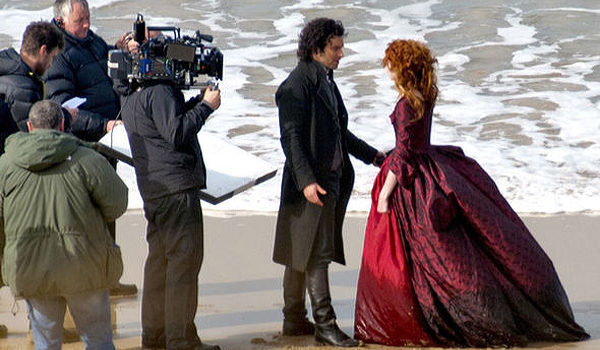 It’s been almost a year since the denizens of Poldark‘s cozy corner of Cornwall graced American shores, what with all their brooding tension and questionable costuming choices. Rumors are flying in the British press about the second season, so why not indulge in a little speculation for fans on this side of the pond?

Here’s what I could dig up… That’s at the earliest. And that’s in the UK. So I’d guess January 2017 for PBS Masterpiece here in the states (however, that’s wild speculation on my part). Conveniently, much of the season 2 filming occurred during fall and winter 2015 to 2016, so the whole thing will have an autumnal look and feel. But that may mean less shirtless scything (awww). I don’t know what that means exactly — just that it’s not out in the fields. And they will be high quality. So, um, artistic? Crucial to the plot? Maybe Ross becomes a studio model and Demelza takes up painting? From the pouty-lipped mouth of Aidan Turner himself, “We’ve two extra episodes this season, which is amazing. The shoot is probably seven and a half months or something like that. A bit longer than last year.” 4. We See One New Fashion Plate in Poldark Series 2 Joining the folks in Cornwall is Caroline Penvenen (played by Gabriella Wilde), who will up the style game. Maybe. Her character has some money and she’s upper-class, so supposedly she’ll be wearing fancy clothes. But let’s remember series one’s costuming ups and downs and not get our hopes up too high. What do they mean? What are they from? I don’t know, but let’s all try to guess! I bet they didn’t rent a wind machine for that effect. And the Great Bobby Pin Shortage of the 2000s strikes again! Crew guy is not impressed by all this twu wuv. Oh Elizabeth, is that the only style you wear? Yep, Demelza is preggers again (c’mon, if you shag that much, it’s gonna happen!).

Are you excited for more Poldark?