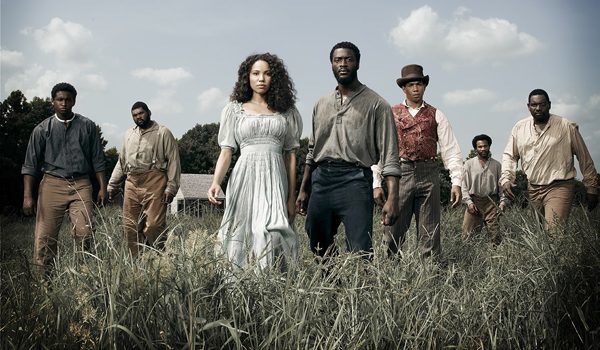 The second season of Underground (2016-) premieres on WGN America on March 8, 2017, and this Civil War drama about the Underground Railroad will introduce actual historical figures like Harriet Tubman (played by Aisha Hinds) and an appearance of Frederick Douglass (played by John Legend). So it’s about time we reviewed the first season.

I admit I was dubious about the costumes going in because some not-so-great photos had come up in searches, and we’d used them for Snark Week (the hair! the fit! urgh). But in context, these things are far less noticeable (OK, except Elizabeth’s hair, it’s still totally new wave 1980s). The storyline is compelling, the acting is top-notch, and the costumes are not egregiously inaccurate as to be distracting. Everything looks generally right and not jarring. 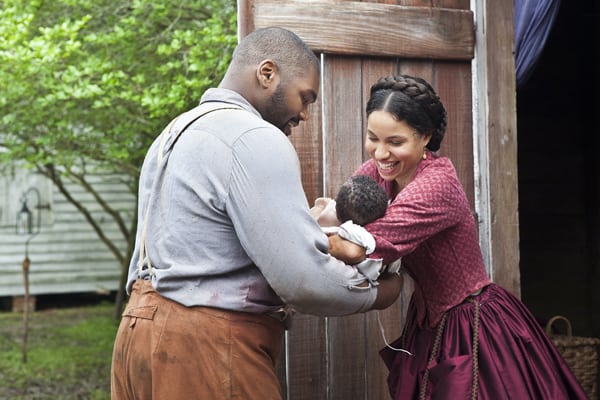 In this still, it looks like the skirt worn by Rosalee (Jurnee Smollett-Bell) has an elastic or drawstring waist, because it’s bunched up and gaps. But I didn’t notice that onscreen. 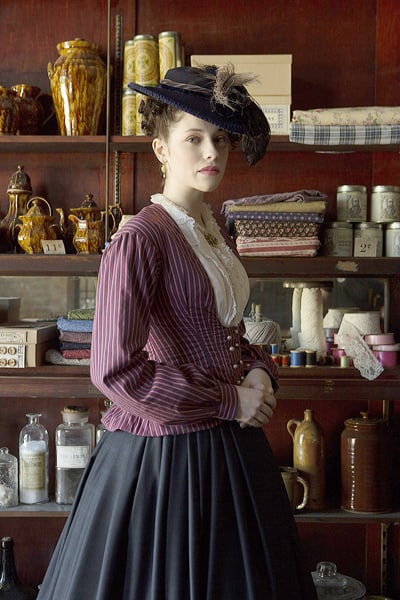 Elizabeth (Jessica De Gouw) generally wears some of the most historically accurate clothes, but her hairstyle doesn’t work IMO. 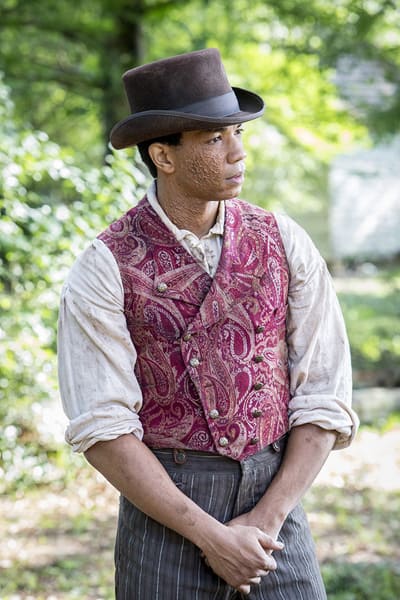 As the field boss, Cato (Alano Miller) gets better clothes than the other slaves. 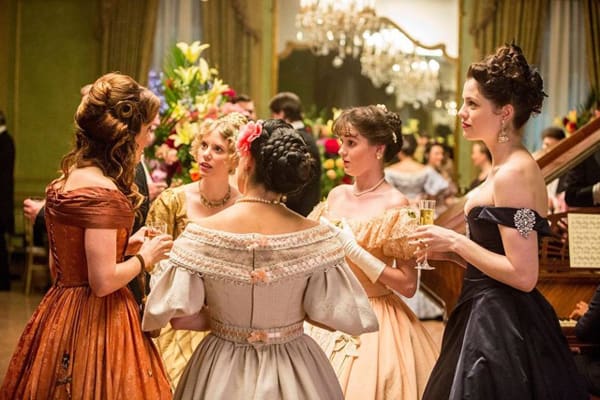 The fancy party scenes look OK (tho’ please let that be hook-and-eye closure, not a zipper up the back of that silver dress in the center), but it’s the hair that’s the most inaccurate.

What stands out more glaringly is the modern music, especially since it’s not as deeply and consistently woven into the show like in Peaky Blinders (2013) or Copper (2012). Just here and there, scenes will be underscored with pop/hip-hop tunes, and it feels unexpected. This is mixed in with traditional gospel music, which is, of course, more appropriate. John Legend selected much of the music for the series, and, according to interviews, the mix of modern and period music is on purpose to ‘grab a younger audience.’ Sure, I guess, I just wish it had been done more thoroughly. Go big or go home, you know?

None of these nitpicks are enough to avoid the show because the series is compelling. The entwined storylines of the enslaved peoples, the masters, the abolitionists, and the slave traders are complicated and believable. Most of the attention is on the characters who are enslaved, those in the big house and those in the field, and the deeply twisted system that forces them into factions. It’s faintly like the worst office politics you can imagine, where some folks are sucking up to the boss to get crumbs of attention, while others are plotting revenge. Ultimately, it’s about survival and escape. This is an action-adventure series as much as a historical costume show — we are following the main characters on the run for their lives. 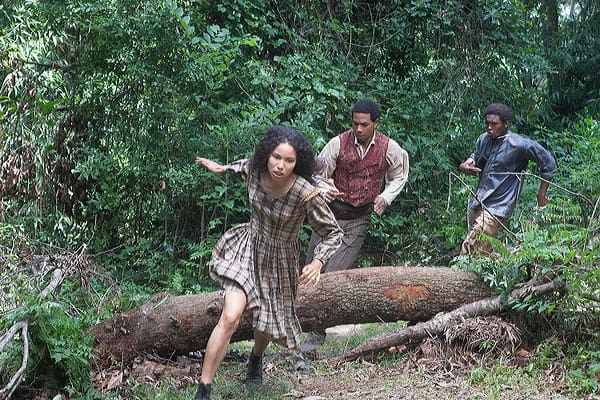 Sure, we’ve snarked Underground‘s costumes, and then I’ve said they’re passable within the series, but that’s not unusual. This is a basic-cable TV series, clearly not a big-budget production, and not everything worn onscreen is going to be super historically accurate. Assembled all together, however, the picture works for 1850s Georgia. Costume designer Karyn Wagner (who studied art history at UC Davis!) researched the era to get inspiration for Underground‘s look, specifically citing daguerreotypes in the book Dressed for the Photographer. However, she and the producers also wanted the look to be relatable to modern audiences:

“On Underground I really modernized the 1850s. I wanted the characters to be very, very accessible, so I incorporated more modern fabrics. After long discussions with the showrunners and the director and the production designer, we hit upon this narrow bandwidth, if you will, where everything references the period, but we’ve taken it to a place that may never have existed. You can’t know for sure because nobody’s seen the inside of every single household in 1857, but it seems unlikely that some of these things actually existed in the form that we made them. But we didn’t go too far off topic, again, so as to be distracting.” 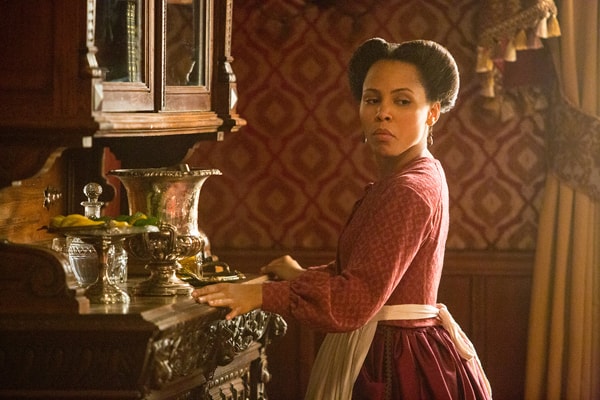 Ernestine (Amirah Vann) and the other house slaves wear colors that blend in with the wallpaper to emphasize that they were considered “things” and not real human beings.

Wagner notes in an other interview that the modern aesthetic comes out particularly in the colors schemes:

“Each group had its own color palette, the northerners had darker colors, sort of more patriotic colors, but also those were sort of inspired by Belgian fashion designer Dries Van Noten, and then the southerners were from Dior in the ’50s, I looked at Versace from the ’80s, I looked at things from the turn of the century, you know, all much later than our era, but trying to imbue each costume with a sense of its own place in our universe in our galaxy.” 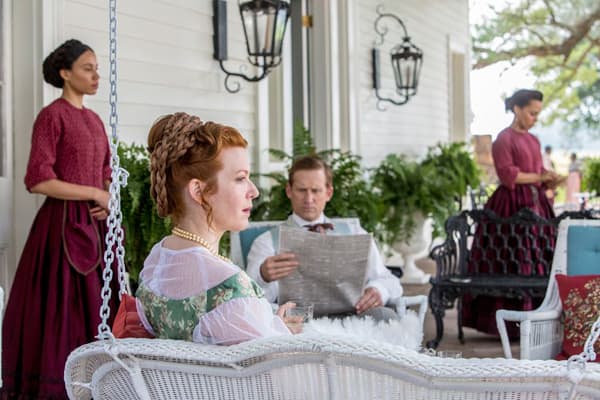 Again, the hair could be more historically accurate, as seen on the lady of the house, Suzannah (Andrea Frankle). 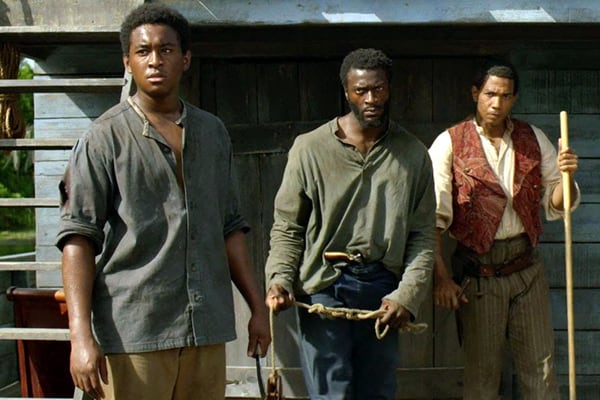 One other small quibble is that the field slaves’ clothes (and when they’re running away) could use more distressing. Everything looks very clean and new. But it’s clear that Karyn Wagner didn’t have the resources to create those effects in the tight timelines of a TV production.

She further discusses the difficulty of making over 7,000 costume pieces for the season with a small, relatively unskilled labor pool in Baton Rouge, Florida, under the fast-paced conditions of a TV production, in this video.

Will you be tuning in to Underground‘s season 2?