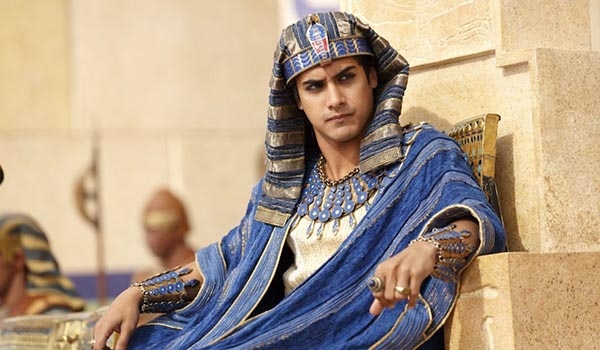 So, here’s the problem: none of us know diddly about ancient Egyptian costume. That makes it hard to review Tut, the 2015 miniseries on the Spike (ooo, manly!) channel. I tried asking around on social networks to see if I could call in any guest-ringers, but nobody bit. So, I’m going to review it, A) because I watched it, and B) because I’m fascinated by ancient Egypt, but I here formally declare to know absolutely NOTHING about whether what they were wearing was completely perfect or 1000% made up.

Instead, I’m going to talk about:

No, and this is the biggest problem with the feature. King Tutankhamen is probably the most recognized figure from Ancient Egypt due to the discovery of his mostly intact tomb in 1922. And as such, there’s a lot of information out there about him. Granted, ideas about Tut have changed a lot since 1922, but as someone whose knowledge in this category comes from Wikipedia, the Smithsonian Magazine, National Geographic, and a great podcast (Eric’s Guide to Ancient Egypt), even I can tell you: Nope.

The problem here is two-fold. Obviously, given that this film was made for the Spike channel, it needed to be manly with lots of men doing men things and hot C.H.I.X. being hot. But there’s been a ton of research that’s come out over the past few years that tells us important, basic facts like: 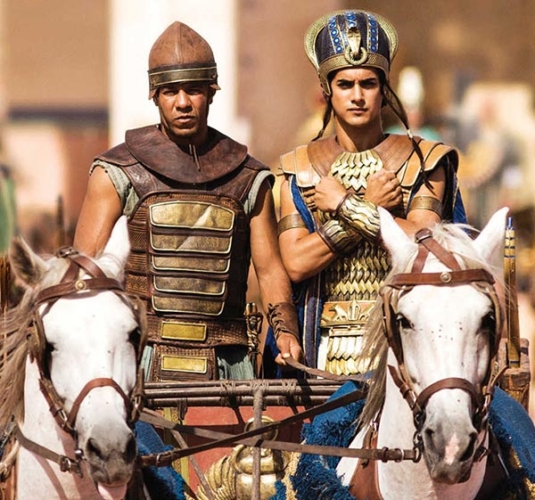 This Tut is ready to rumble.

Now, granted, there’s lots of speculation when it comes to ancient Egyptian history and Tut specifically, and I get that you have to A) throw a dart when it comes to history, and if you’re making a movie, B) pick the more entertaining options. But it seems weird to me that they went with a totally retro view of Tut when there’s been so much press around all the DNA and related research over the past five or so years.

Sure! Again, it was made for the Spike channel, which is kind of the equivalent of Maxim magazine. There’s lots of boys training for war, power-playing against each other, shagging the lay-deeze, and being manly in battle. On the other hand, there are only two important female characters. On the positive side, they are strong and feisty, but on the negative side they are pretty much focused on their relationships to Tut (no Bechtel Test passage here) — and one of them is super scheme-y. I did like that Tut wasn’t just a lady-killer but has real relationships with the women in his life.

Basically, the miniseries is pretty much exactly what you’d think it would be: pretty clothes, pretty people, manly battles, plus some spunky women. And yes, what another reviewer called “young actors often photographed as if this were a shampoo commercial” (TV Review: ‘Tut’). 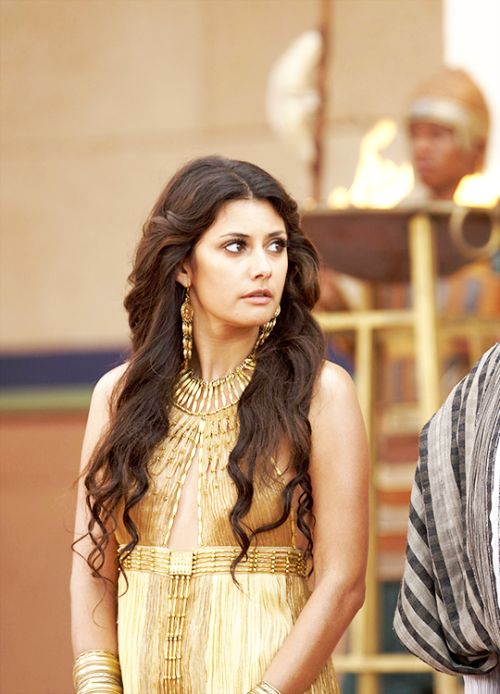 Ankhesenamun (Sibylla Deen) has perpetually gorgeous hair that is always conveniently not falling in her face.

How They’d Do on Ethnic Representation?

Better than most? The good news is that they got that ancient Egypt was, ethnically, a melting pot. There’s really only two main supporting characters who look European (Ben Kingsley as vizier Ay, although he is Anglo-Indian, and Iddo Goldberg as Lagos, who is Israeli), and it’s plausible that they could come from Greek or other Mediterranean stock. Tut and his wife/sister are played by actors of mixed Indian-white descent (Avan Jogia and Sibylla Deen), which means they have a non-white look, which is good … but they’re not Middle Eastern, and that could be a problem. Nonso Anozie (who you may know from Game of Thrones) plays General Horemheb, and he’s English but of Nigerian descent. 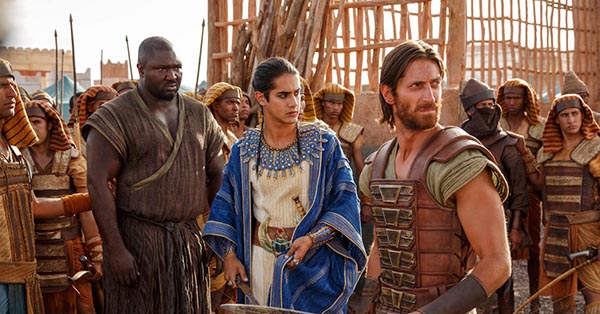 The biggest problem comes with Egypt’s main enemies, the Mitanni. Now, I may totally be talking out of my ass here, but a quick glance at Wikipedia tells me that the Mitanni were based in present-day Syria and Iraq. In the movie, they are played by sub-Saharan looking actors, which pretty much makes it the lighter-skinned Egyptians against the (inaccurately) darker-skinned Mitanni. 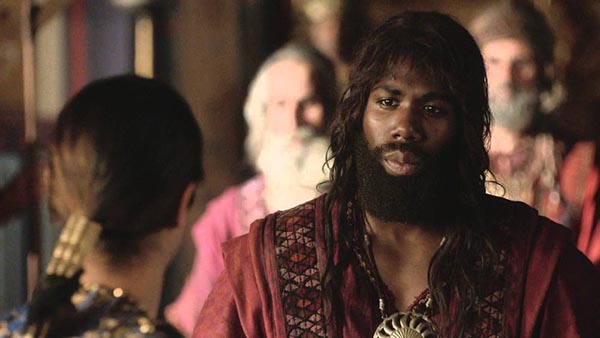 Prince Tis’ata of the Mitanni

Furthermore, one of Tut’s love interests, Suhad, is one-eighth Mitanni. She’s played by the beautiful Kylie Bunbury and is clearly of mixed African descent. The issue is that, contrary to what I’ve read, where ethnicity probably didn’t matter much to ancient Egyptians so much as culture (i.e., if you were born and raised in Egypt, you were Egyptian), she is discriminated against for being “Mitanni,” even though it was her grandmother who was Mitanni, and she was, indeed, born and raised in Egypt. Tut is the only one progressive enough to argue that she’s Egyptian. 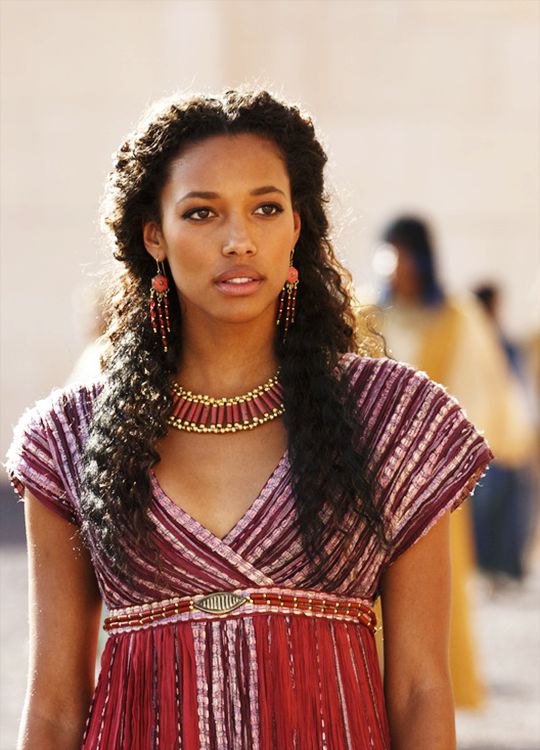 Are the Costumes Pretty?

Hells yeah. They used gorgeous fabrics and pleated and layered them in beautiful ways. The colors are gorgeous, I loved the way they used bands of trim to highlight the women’s figures, and I basically want them all. 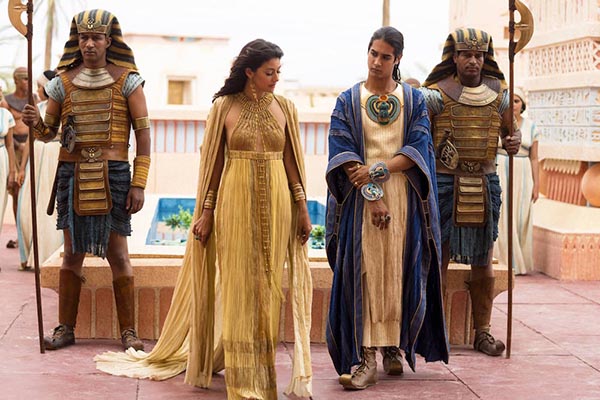 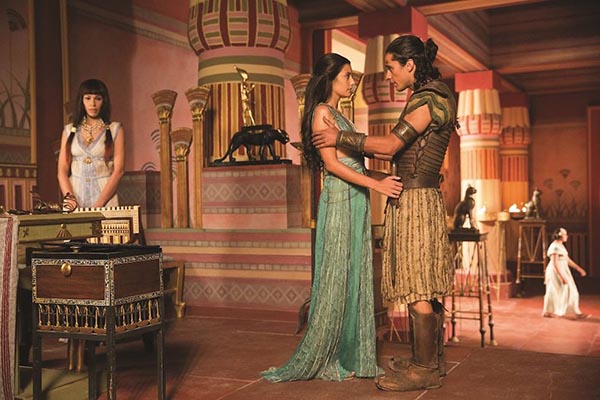 I want this too. 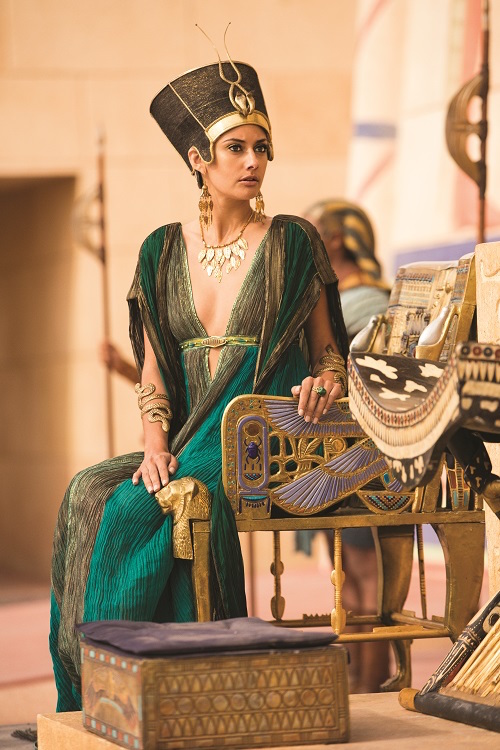 I do question why Ben Kingsley was the only character to always wear heavy eyeliner (other characters did too, but not always, and not as heavy), except that I guess they were trying to make him look more Egyptian … but I felt like it just highlighted his non-Middle Eastern-ness. 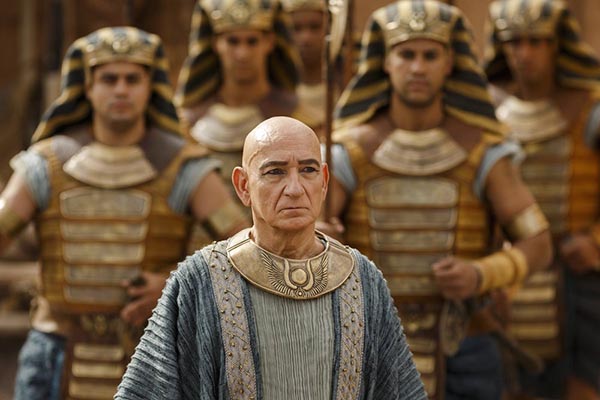 Why all the guy-liner, Ben?

The costumes were designed by Carlo Poggiolo (Cold Mountain, The Brothers Grimm, Silk, and Romeo & Juliet), who according to interviews has long been fascinated by, and wanted to design costumes from, ancient Egypt. He told Fashion Times:

“I’ve always loved the history of Ancient Egypt. As a young student, I had always been fascinated by that time in history and had a large assortment of books in my library regarding that specific era. The start of my preparation for the film began in Italy, so I went straight to Turin, where there is the second most important museum in the world on Egypt, after the one in Cairo. My inspiration started there, where original artifacts were displayed. Real jewelry, real wigs, real fabrics. I had already visited the museum several times, thinking of how I would love to do a film on Egypt, and all of a sudden I found myself with the script for ‘Tut’ on my desk” (‘Tut’ Costume Designer Carlo Poggioli Talks Ancient Egyptian Fashion: Exclusive Interview).

Poggioli and his team certainly brought a high level of craftsmanship to the costumes. He says of the jewelry:

“It was all made in Italy by a jewel house in Rome because the enameling process is very complicated. I think this is the first movie in the world that gives viewers a true sense of the level of refinement of the handmade Egyptian jewelry the nobles in that era wore” (Everything’s Better in Leather: Tut’s Carlo Poggioli Talks Ancient Egyptian Style). 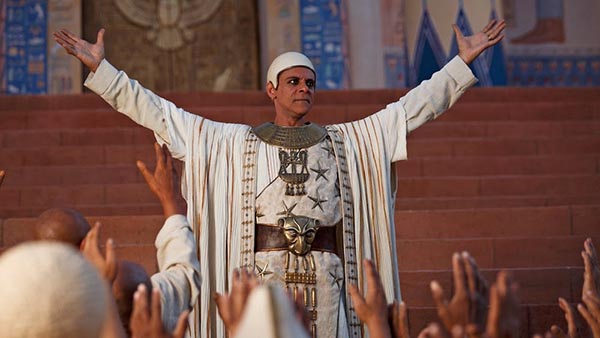 In this behind-the-scenes video about the costumes, you can see some of the craftspeople working on the detailed fabric manipulation used for the film:

Poggioli does say that the costumes are not strictly historically accurate:

“When I start a film, I like documenting as much as possible on the historical reality that I am about to face, understanding the forms during that time, how clothing was modeled cut and pleated, how fabrics were dyed. Once I am confident in having assimilated that knowledge, then I start to add on fantasy. For ‘Tut,’ I started with reality in its absolute then added on adjustments to help the actor become somehow modern” (‘Tut’ Costume Designer Carlo Poggioli Talks Ancient Egyptian Fashion: Exclusive Interview). 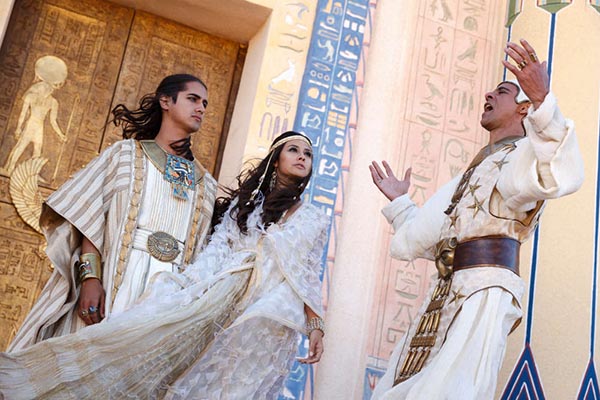 Ankhesenamun’s cape is covered in feathers, and seems a bit fanciful to me, although what do I know?

Anyone want to weigh in on the historical accuracy of Tut, story or costumes? Or its prettiness?