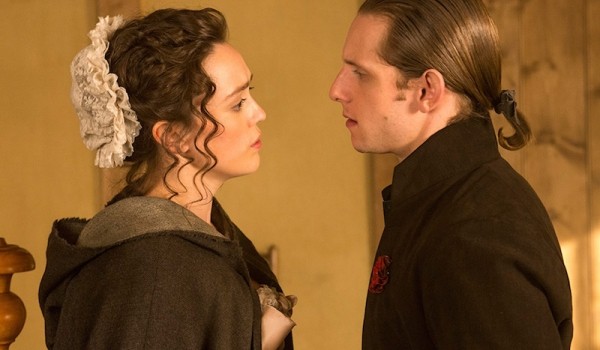 PEOPLE. Y’ALL HAVE BEEN REQUESTING THIS ONE FOR YEARS, NOW. And Trystan is a big meanie and made me. So I did it. I paid for season 1 of Turn: Washington’s Spies (2014). And I made it through four slow, painful episodes during which I kept thinking “WHYYYYYYYY? What could possibly interest people about this show?” I even reached out to our Frock Flicks patrons on Patreon, asking if there were specific episodes I should be watching so as not to miss some hidden genius. But no dice there either.

I mean, the costumes don’t suck, but they’re not genius either (do things get massively more exciting in later seasons??). There are cute boys (J.J. Field! Samuel Roukin!). I assume they don’t mess up the history or y’all wouldn’t be praising it so much. But do I really care about the struggle between Abraham and his dad, which is so much of what the first 4 episodes are about? Do I care whether Abe is going to stick with his forced-upon-him nicey-nice wife Mary or his previous love Anna? Will the townspeople revolt if the Brits use their gravestones as cannon fodder? I DON’T CARE. Okay, so Burn Gorman as Major Hewlett is appropriately evil. But Abraham is just nothing to get excited about, principles notwithstanding. The addition of a knit cap does nothing for me. I’m not fascinated by father/son issues. J.J. Field. YES. But I’d rather watch him be charming in Northanger Abbey. Samuel Roukin is both hot AND evil, a deadly combination! And hey, the wigs don’t suck! The costumes on the main women are fine! No back lacing, yay! And their hair is up! But I am unimpressed by the fit of these gowns in the so-far showiest scene. Especially Mrs. Biddy of Biddyton in the center back.

Alright kids. I’ve paid for all of season 1, so if you’ve got a SPECIFIC episode I can watch that will blow me away, tell me so in the comments. Otherwise, I did my duty — I tried, I swear I did!

What is the secret hidden genius of Turn: Washington’s Spies?