Don’t be duped by that “Historically Accurate Disney Princesses” listicle — Buzzfeed gets it wrong (of course). If you want to imagine Disney princesses in history, take it from, y’know, actual history. I covered Cinderella, Sleeping Beauty, Pocahontas, Ariel, Jasmine, Belle, and Mulan in part 1. 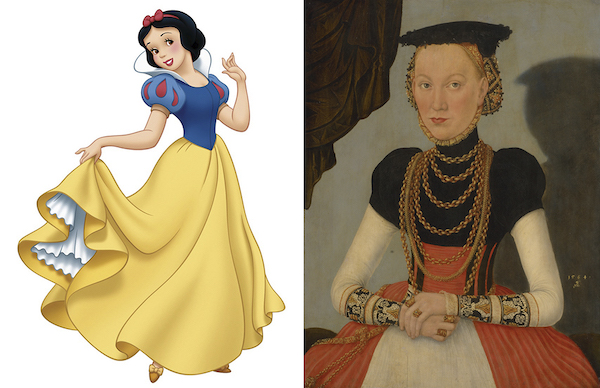 Snow White‘s Disney outfit doesn’t really match up with the location for her story, deep in the forests of Bavaria. The above portrait by Lucas Cranach shows how a fashionable wealthy woman would have dressed in Saxony, which is quite a bit north of Bavaria, but the silhouette is similar to Snow White’s, so I’m going with it. To further complicate things, the evil Queen Grimhilde is clearly based on the 13th-century statue of 11th-century queen Uta von Ballenstadt. With a heaping dose of Joan Crawford, for good measure. 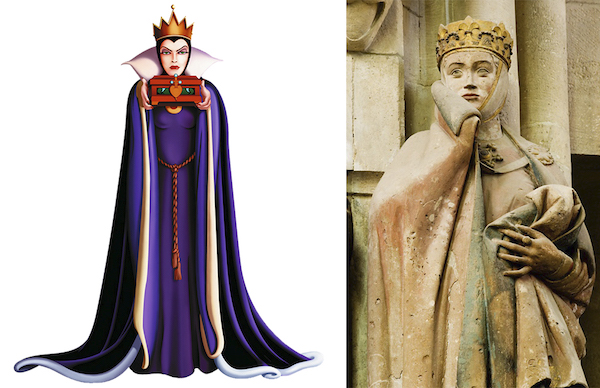 Fun fact: I am Team Villainess. 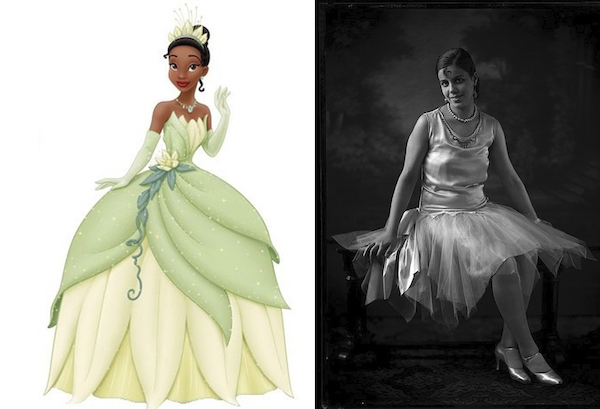 As a youngster, I loved The Little Mermaid because the music is amazing and Ursula the Sea Witch is FABU. But, as an adult I loved The Princess & the Frog more than pretty much any other Disney princess-franchise film yet made because Tiana is the first “real girl” of the bunch who works hard, has a good relationship with her parental figure, has a healthy friendship with a girl her own age, and gets to have an epic adventure. Oh, and yeah, there’s a handsome prince in there somewhere who spends 7/8ths of the film as a frog so, by the end of it, you feel reasonably comfortable that Tiana is well aware of what she’s getting into. T. just feels more fleshed out than any of the other princesses. Anyway, I chose the photo above to represent her real life counterpart, an unnamed African American woman photographed in Washington, D.C. Though the date says 1938, it looks about a decade earlier to me, what with the flattened bust and drop waist.

Full disclosure: I searched for a good likeness form New Orleans and came across Florestine Perrault Collins, who was a successful studio photographer in NOLA in the 1920s-onwards, but though I fell in love with her self portrait from c. 1921, I couldn’t find any of the photos where she’s smiling and looking like someone you’d want to go on an adventure with. 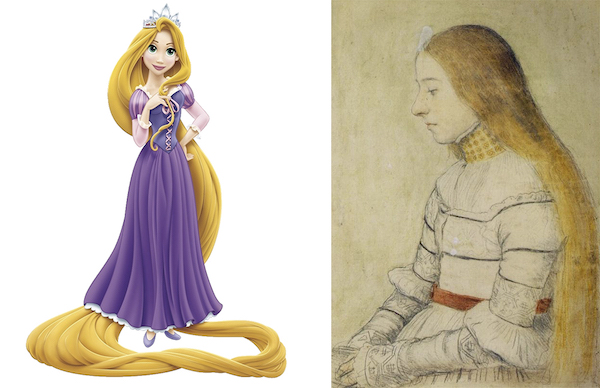 Like Snow White, Rapunzel’s outfit is pretty much generic 16th century-ish. I thought the sketch of Anna Meyer by Hans Holbein the Younger would be a good real-life analogy for her, however, since it shows what an unmarried young woman looked like in the 16th century. When Holbein sketched this study of Anna, she had not yet been married and was shown wearing a beautiful gown with her gorgeous blonde hair loose and hanging past her hips. When the portrait was finished by 1528, Anna had been married off and was repainted with her hair up, as a young married woman would be expected to wear it.

Wonder if the same rules apply to Disney princesses? 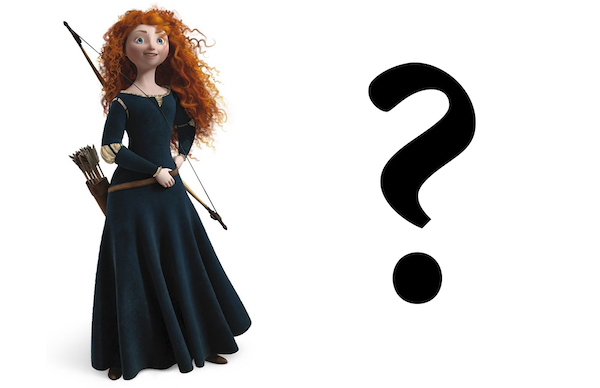 Left: Disney’s Merida. Right: WHAT THE HELL, INTERNET. WHY DO YOU VEX ME SO???

I will cut Disney a little slack here in the clothing research department… It’s hard to find visual resources for medieval Scotland, especially from the Highlands, which was far from the cultural center of the medieval Scottish court in Edinburgh. What little there is that’s out there is also pretty nondescript when it comes to clothing, especially clothing for women. And just FYI, if you search Google with the terms “medieval Scottish women’s clothing” you’re going to turn up thousands of images of bad Ren Faire-esque costumes with a tartan thrown over them. “Scottish illuminations” also turned up a bunch of Celtic music compilations, too.

If anyone out there has some good primary source research on Scottish women’s dress circa the 14th century (that isn’t just a rehash of what they wore in France and England), drop me a line in the comments, because this bitch has lost her patience with the interwebs today.