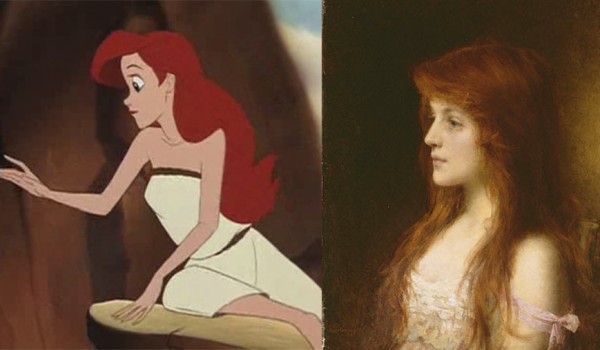 If one more person posts the “Historically Accurate Disney Princesses” video on my Facebook wall, I’m going to scream. I went from “Hm, ok, not historically accurate but whatever” to “Groan, not again” to “WILL YOU STOP SENDING ME THIS INFERNAL VIDEO BECAUSE THESE ARE NOT HISTORICALLY ACCURATE BY ANY STRETCH OF THE IMAGINATION!” I’m such a spoil sport. Also, I probably don’t love Disney movies as much as you do.

It did get me thinking, as a costume historian (I know you’re groaning,”Here she goes again!”), about what “historically accurate” Disney princesses would actually look like.

So, pour yourself a cocktail (it’s 5 p.m. somewhere in the world, after all) and prepare to be stunned by my Mad Research Skillz! 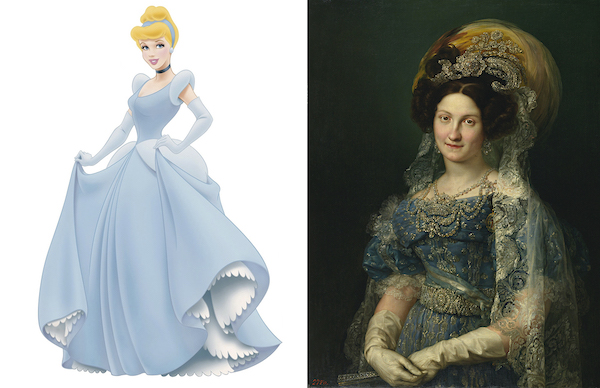 In case you missed it, Kendra did a great two-part blog post about finding some of the actual historical influences (and mental gymnastics) in Disney’s Cinderella. Go read part 1 & part 2 and see what you think!

As far as I’m concerned, I can’t not comment on Cinderella, since she’s pretty much the iconic Disney Princess. No list would be complete without her! So, on the left is Disney’s version, which I’m told was intended to be based in or around the 1830s (though for some reason, I always envisioned her as solidly 18th century, but what do I know?). If that’s the case, then the right is what a real princess would have looked like in the 1830s, all fancied up and ready for some historical dancin’ with a handsome prince (or a mutant Habsburg cousin, for all you know). You should also know that I had a hell of a time finding a portrait of a blonde woman from the 1830s. Apparently, it was not a particularly fashionable hair color in that era. 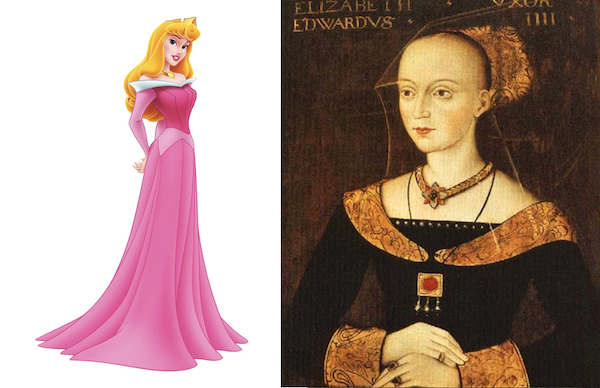 On the left is Princess Aurora, aka Sleeping Beauty. On the right is Elizabeth Wydville, queen consort of England from 1465 to 1470. There’s some debate as to whether or not Aurora is from the 14th or 15th century, but I’m sticking with 15th century, based on the neckline of her gown and the fact that Maleficent is pretty much wearing a houpeland. 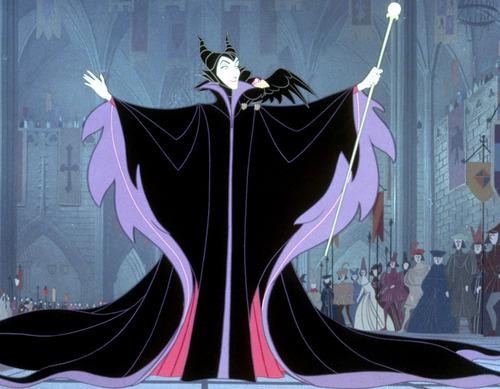 Because evil is always fabulous. 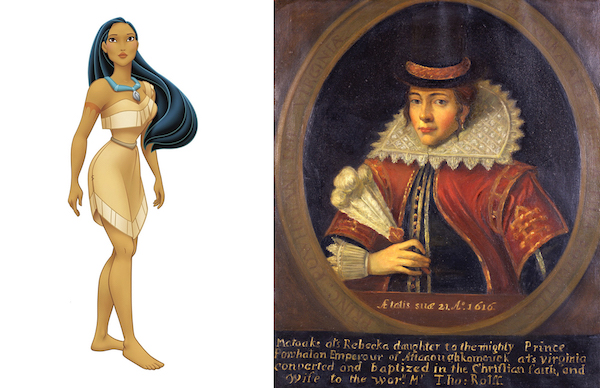 Since no one thought to make a visual record of what Matoaka (aka Pocahontas) looked like before she was taken to England, we’re just going to have to settle with the c. 1616 portrait of “Rebecka Rolfe” as she was known after her arrival in the English court and marriage to Thomas Rolfe. Notice how they also gave her a white girl makeover. In this one case, Disney actually gets points for historical accuracy. Although we just won’t bring up the fact that Matoaka was, like, 4 years old when John Smith arrived on her doorstep, or the fact that she died tragically young of smallpox. Nope. She lived happily ever after with her raccoon buddy! 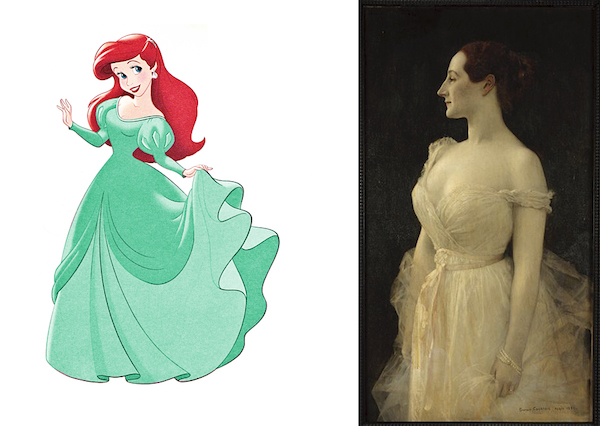 The Little Mermaid came a seminal moment in my adolescence, so of course I was obsessed with the film. I had poured over my big book of Hans Christian Anderson tales as a kid, and when the movie came out when I was hitting puberty, I was all over it like white on rice. The fact that the music was so awesome did help assuage some of the disappointment that Ariel didn’t die tragically heartbroken and turn into sea foam/spirit guide for the children the prince had with that other bitch. Because who doesn’t love a singing crab with a Jamaican accent?

Anyway, Ariel’s human form is dressed in something vaguely 1890s, near as anyone can tell. I picked the portrait of Madame Gautreau, though, because it really made me think of Ariel’s sail dress. Except, you know, classier. 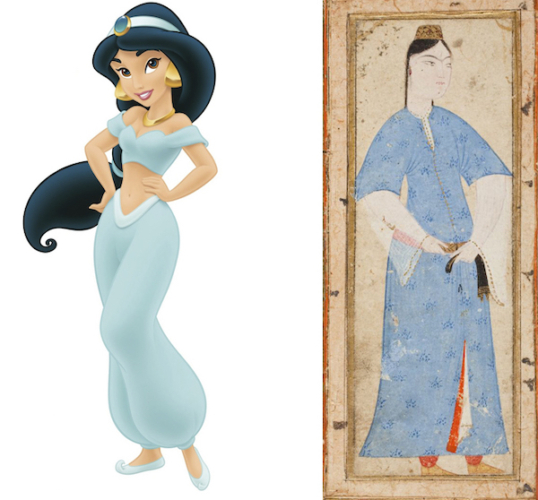 Some internet sources claim that Aladdin was set in the 800s, but I cry B.S. on that, since the Ottoman Sultanate didn’t come into existence until the late 12th century, and if we’re sticking to Disney canon and not the actual history of A Thousand and One Arabian Nights, that places the film somewhere in the region of the years 1200 to 1900, give or take a few decades. Yeah, it’s a big swath of history. For the hell of it, I picked circa 1600, mainly because there’s a ton of visual sources from this period to chose from, and something tells me Disney animators didn’t do a hell of a lot of digging into early medieval Islamic manuscripts. 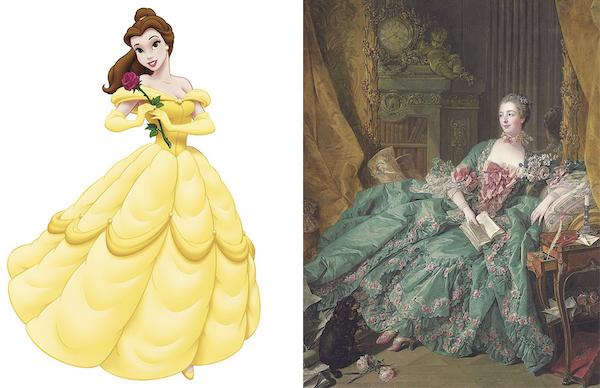 Since Belle was essentially a kept woman, I decided the easiest equation to make here would be the most well-known kept woman of all time, Madame de Pompadour. Look, she’s even got a book! Pompadour was a nerdy book lover just like Belle! In all honesty, Belle is one of my least favorite Disney princesses. I blame the fact that I was going through my cynical late-teenage phase and thought I was Too Smart For That Crap(TM). In reality, Belle and I probably had a lot in common at that age… Except she didn’t have to suffer the indignity of teenage acne. Maybe I would have liked her better if she had a zit or two. 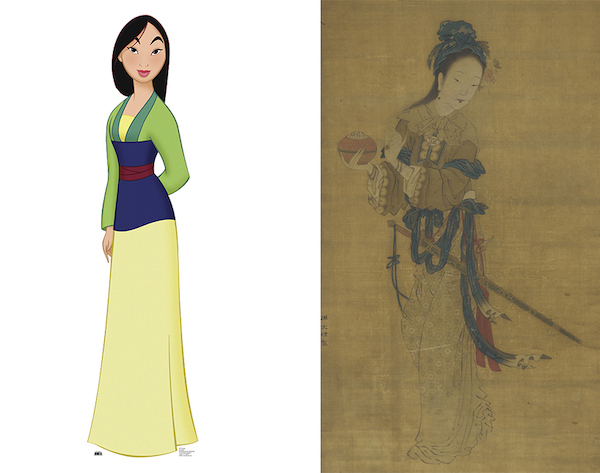 Not surprisingly, there’s actually a ton of visual resources from this period of China that show pretty clearly what a woman would have worn. And, as usual, Disney has streamlined the basic idea of 10th-century Chinese garb for your average cross-dressing rural peasant girl, but I’d LOVE to see the outfit in Zhou Wenju’s portrait of Mulan recreated. So fabulous.

Tomorrow, I’ll finish up the series, with part 2 here!