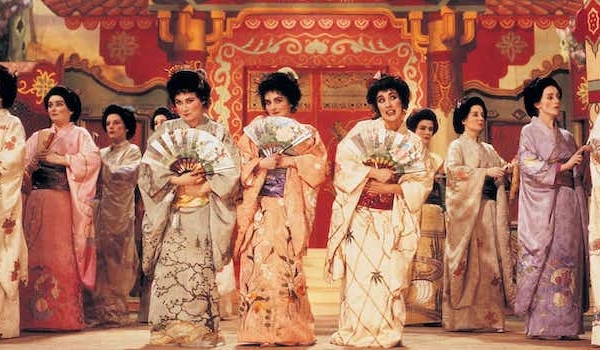 Both Kendra and Trystan took a hard pass on reviewing Mike Leigh’s Topsy-Turvy (1999) over the years, for various reasons. And then there’s me, the one of our little trifecta who actually can’t stand the overstuffed Victorian era at all, especially the height of the bustle era in the 1880s, and yet I love the ridiculous sumptuousness of the costumes in this movie so much. I also don’t go much for musicals and the plot is centered on the first staging of Gilbert & Sullivan’s The Mikado, which, 130 years later, is still one of the perennial favorites of local musical theaters everywhere.

It could also be because it’s one of those films that stars half of the famous actors in Britain (there are only six starring actors working in the UK at any given time. You have to kill one of them Highlander-style to break in. That’s my theory and I’m sticking to it): Shirley Henderson, Jim Broadbent, Timothy Spall, and Leslie Manville, making for a solid cast working with a solid script, and wearing solidly ridiculous period costumes. So basically everything I love about a good frock flick right there. 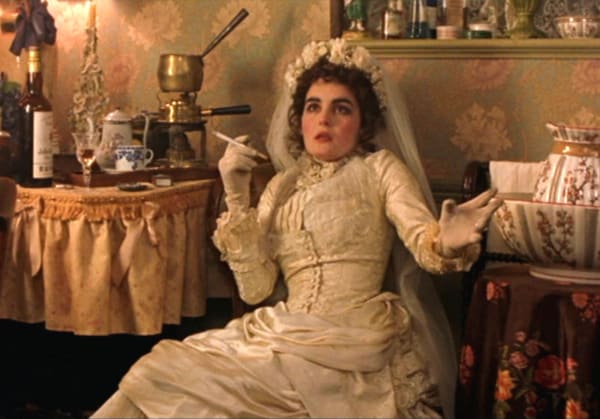 Shirley Henderson as the pampered ingenue.

Leigh’s long-standing collaborator Lindy Hemming (Wonder Woman) designed the costumes, which are practically perfect in both their sumptuous restraint and Victorian theatricality. In an interview with Criterion in 2011, she describes not only the Leigh’s famous improvisational technique and how it influenced the costumes she designed, but also how the actors embodied those costumes. 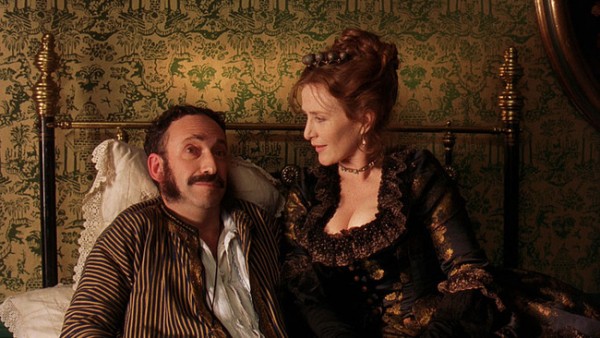 “At set points during the rehearsal or preproduction period, you have designated times of work, but mainly what happens is, as the actors work with Mike and they discuss who they are or are not going to play, and what kind of character it is, and what kind of world he or she lives in or works in, you — the costumer — come in to assist the actor to have the right kind of clothes, and sometimes props, that would go with the life or the person they’re choosing to become. You are researching what the actor is researching. You are looking into that world. What does this type of person wear? Where do they go out at night? You immerse yourself so that when you come back, when the actor has started to have a proper character — and all this is happening with different actors simultaneously — you begin to do their costumes as their character 100 percent…

…With corsets, we wanted the actors wearing them from day one, because that would inform how you move and how you breathe and who you are. I mean, how do you sing with a corset? The shoes as well. If someone wears high heels, there’s no point in them rehearsing in a pair of trainers.” 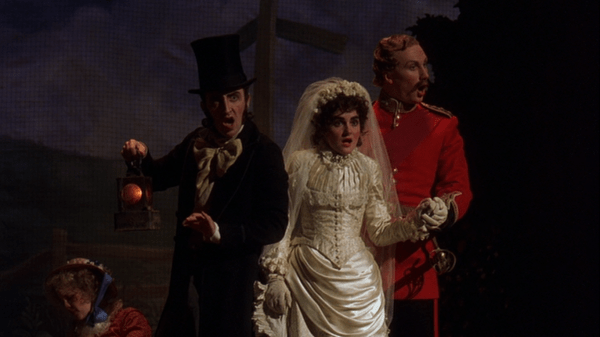 What is interesting is that Hemming asserts that Leigh gave her a fair amount of latitude to interpret the costuming of late-1880s Victorian society, and ultimately, the choice to focus on historical accuracy appears to be her own. It’s a choice that allows the actors to inhabit (and inhibit) their characters in a believable way. I firmly believe that if the costuming hadn’t been so accurate, the film would have collapsed under the weight of its own barely restrained ridiculousness. 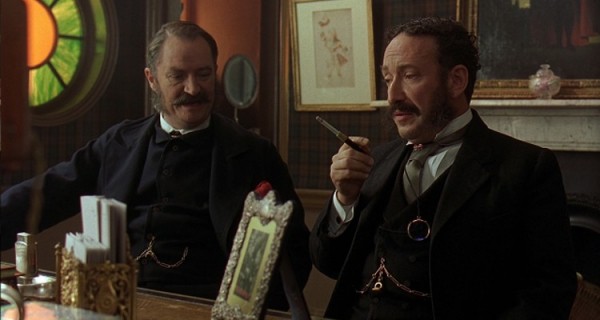 The first half of the film deals with the stagnating careers of William Schwenck Gilbert (Jim Broadbent) and Arthur Sullivan (Allan Corduner) who are increasingly at creative odds with one another. Sullivan’s ennui that has led to his reliance on morphine and alcohol. Gilbert, comfortable in his own genius as librettist, also must come to grips with the reality that their latest musical, Princess Aida, is a flop. Their impresario D’Oyle (pronounced “doily”, and played by Ron Cook) asks them to produce another musical as is required by their contract, but Sullivan flat out refuses on account of Gilbert’s relentlessly formulaic plot lines. They uneasily part ways with Sullivan embarking on a European tour which he hopes will help revive his creativity in order to write his own music when he returns. Gilbert stays behind in London and stalks his house with increasing irritability, much to the chagrin of his wife, Lucy (Lesley Manville). 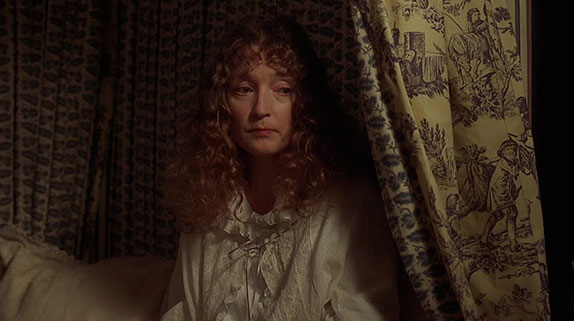 That is, until one day, when Lucy returns from a visit to Knightsbridge where she informs her husband of an encounter with “three tiny Japanese ladies … in their funny dressing gowns.” The reason they are in London, it turns out, is because of a Japanese exhibition at Humpfreys’ Hall. This was only 35 years or so years since Japan had opened its kingdom to the West, so, of course, curiosity gets the better of Gilbert, and he and Lucy spend an afternoon wandering the exhibition. Gilbert is immediately captivated by a kabuki performance, despite having no idea what the actors are saying. He returns home with a souvenir katana and a vague notion of something starting to percolate in his imagination. He then goes on to write the libretto for The Mikado, which is received well by Sullivan who agrees to compose the music, and everyone is satisfied that the topical nature of the plot (coinciding as it does with the Victorian craze for japonisme) will produce a hit. 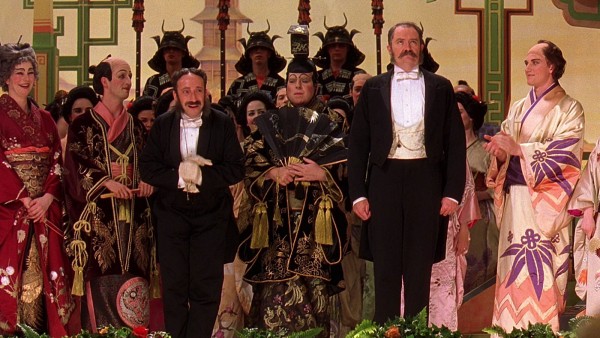 The intersection where Victorian society, with all of its extremely problematic xenophobia and racism, mixed with overconfidence and curiosity, meets the human zoo-like aspect of the Japanese exhibition is where things get uncomfortable for modern audiences. Even though this film came out in 1999, the societal understanding of cultural appropriation was fairly nonexistent outside of academia. Re-watching the film recently, I found it uncomfortable how Leigh approached the topic, which is to say that he really didn’t address it so much as revel in it. In an interview with The Guardian around the time the movie came out, Leigh even says, “it’s fantastically, wonderfully un-PC,” which is about as typical for the late-1990s as you can get. Modern audiences might not be so easily lulled into the whimsy as turned off by the racist undertones and hand-waving about “camp.” 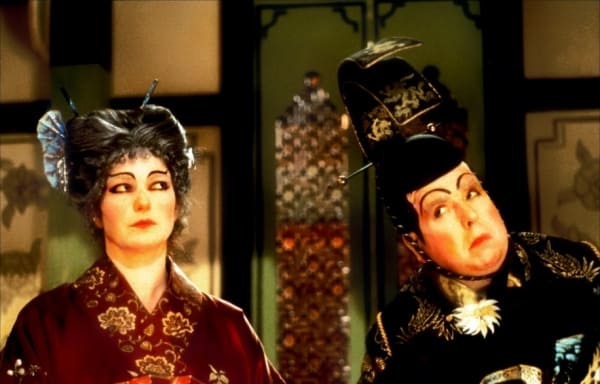 Hemming, though, had a bit more nuanced approach to the costuming, which stayed true to the inherent nature of the Victorian age and in turn makes the white people look even more ridiculous without the Japanese tutors that were brought in to assist with the production. I will be so bold as to state that the costuming tells the real story of how authentic the Japanese are in their Japanesness and how inauthentic the whites are in their whiteness. 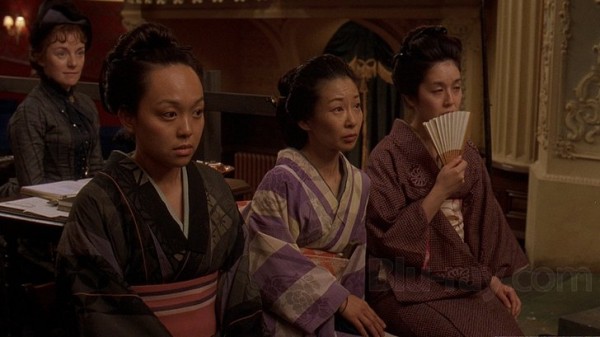 “We wanted it to be a perceived version of what the Japanese looked like. We wanted it to be Victorian Japanese. The wooden Japanese clogs were most amazing to the Victorians. They thought them wonderful and funny in turn. We were looking into the technology of fabrics, of where they were produced, what dyes they would have used, how things would have been printed or hand-painted, you know? We had to know how the day-to-day fabrics worked as well as the theatrical costumes, and how they were made.” — Lindy Hemming, Dressing for Leigh 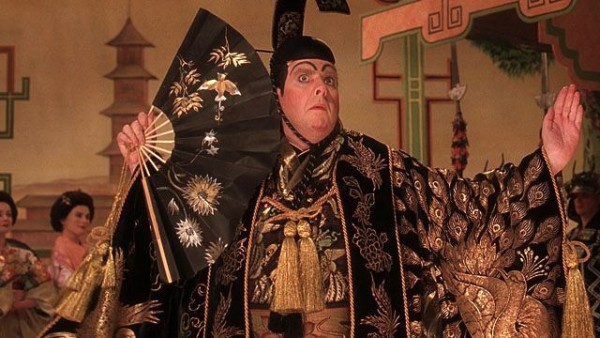 Not surprisingly, however, the costumes produced for The Mikado are inflected with Victorianisms. The actresses refused to wear the kimono without a corset, so the designer had to engineer an obi/corset hybrid that satisfied everyone’s needs at least on the surface. Honestly, the entire costume-fitting scene in the movie is pure genius and will ring very true to anyone who has ever worked as a costume designer. 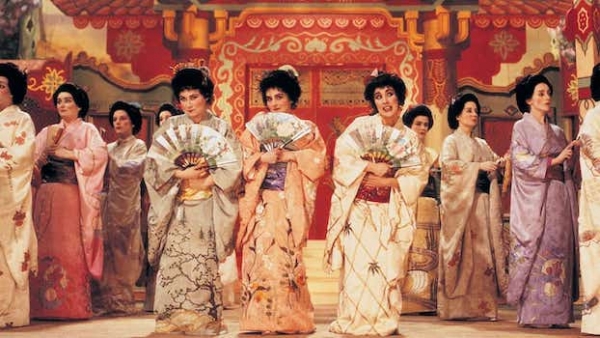 The bottom line is that I really keep wanting to apologize for liking this movie as much as I do, because it is super problematic as a modern film dealing with race, cultural appropriation, and Otherness. Yet, at the same time, it’s hard not to see it for what it is: An authentic look at how performative Victorian society was and how that performativity informed art. If you approach Topsy-Turvy as an unashamed view of all the character flaws of the Victorian age converging on one production of a musical circa 1888, you will likely find the film an enjoyable visual feast of late-19th-century silliness.

What did you think of Topsy-Turvy?