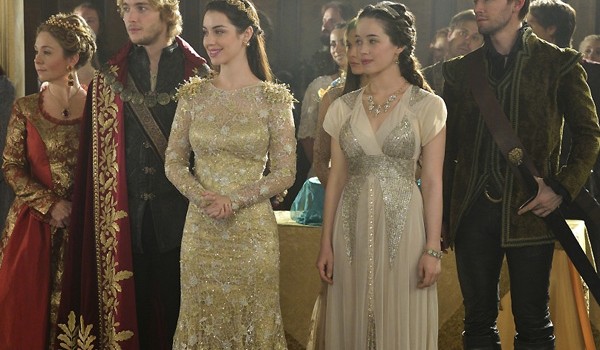 I figured it was time I dust off my ol’ list of shitorical flicks and go for another round! As always, feel free to chime in with your top shit pics! 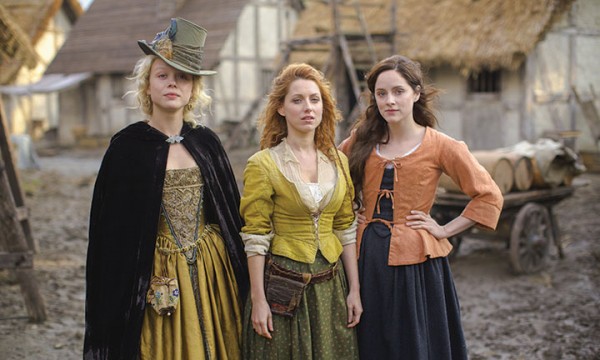 We tried to watch this show, honest, we really tried. The costumes came close-ish to actual historical clothing in the early 17th century, but the lack of hairpins, the weird accessories, and the ham-fisted way Feminism was inserted into every scene quickly turned us off. Yes folks, there is in fact a wrong way to address feminist topics in historical dramas, and this show is pretty much the gold standard in that regard. Listen to our podcast for all the reasons why it didn’t work. 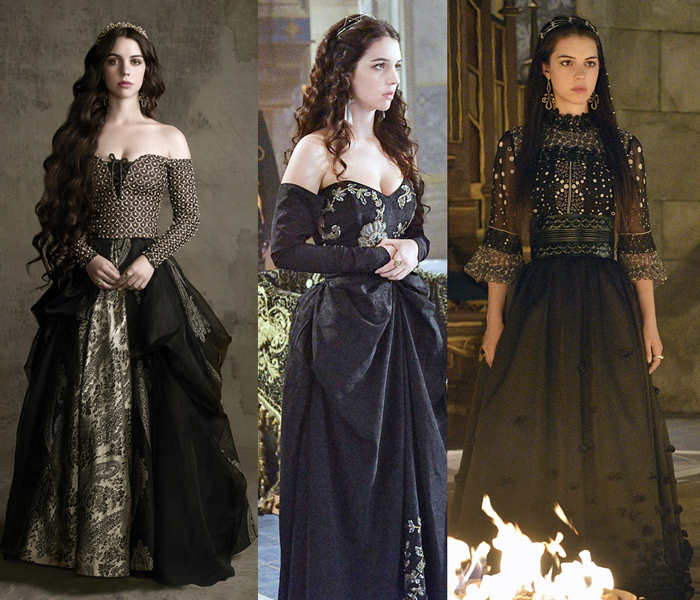 There’s kind of a 2/3rds divide here at Frock Flicks over this show. Trystan has gone on the record saying she has a little soft spot for the soapy teenage drama about her favorite queen, Mary, Queen of Scots. Kendra and I, on the other hand, didn’t really appreciate the aesthetic of the show that was more modern couture than historical anything. Ultimately, whether you love it or hate it, Reign has a very loose interpretation of historical fact in favor of maximizing the teenage angst of a fictionalized young queen. I will point out that the costumes got somewhat better later in the series, but whether that was because of the outcry from history buffs, or because of a change in artistic direction, I’m not sure I can say either way. 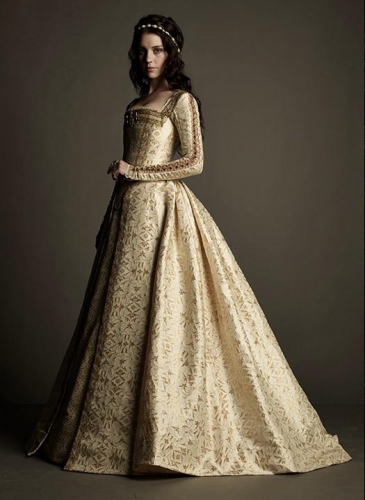 If you squint, you can see a 16th century silhouette. This got better the longer the series ran, but there was still no attempt whatsoever to put the girls’ hair up, and head necklaces were a reoccurring trope. 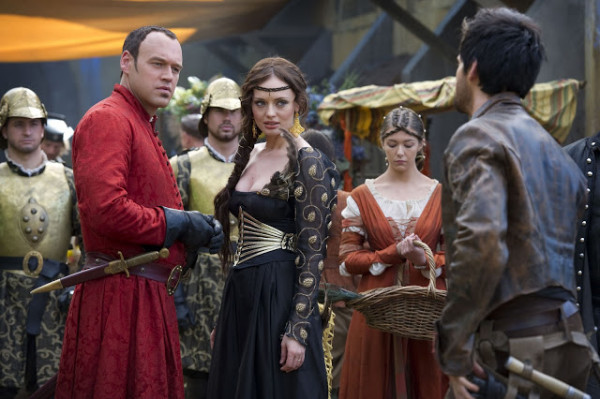 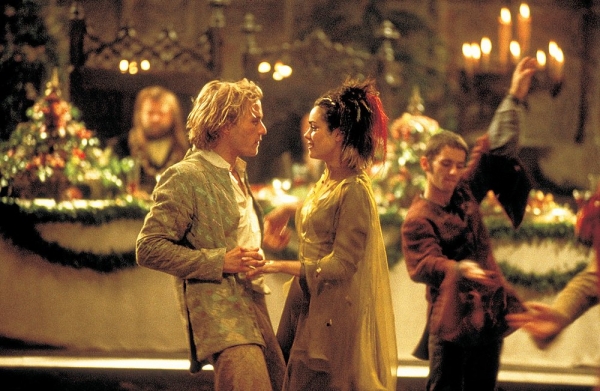 This film is beloved by most of my medieval reenactor friends because, allegedly, it represents the medieval tournament culture fairly accurately. I can’t comment because medieval tournament culture is not in the least bit one of my areas of research, but this argument is constantly put forth by so many different people I know who know better than I about this area of study, so there must be some validity to it. That said, literally everything else about the film infuriates the ever living snot out of me. Especially anything having to do with Lady Jocelyn, who is such a weak sauce character it’s insulting on its own. But then, as if to add insult to injury, she’s shown wearing the most ridiculously non-medieval costumes possible. It’s basically predicting shows like Reign where who cares if the lead female character is interesting or complex or wearing anything historical, just stick a lampshade on her head and call it good.

And before anyone points out that the soundtrack alone should leave no question about how historically accurate the film was attempting to be, I want to just say that there are many good examples of how to incorporate modern music into a historical film (Exhibit A: Sophia Coppola’s Marie Antoinette). Yeah, yeah, A Knight’s Tale probably paved the way for that kind of modern/historical juxtaposition, but I still maintain that it could have been pulled off with more finesse than a cheap Brazilian wax. 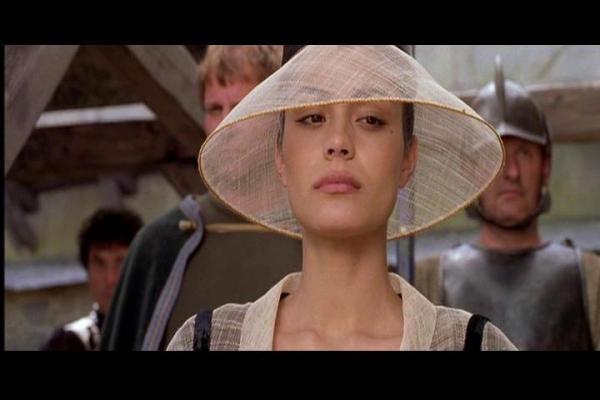 I’ll let you guess where the light switch is. 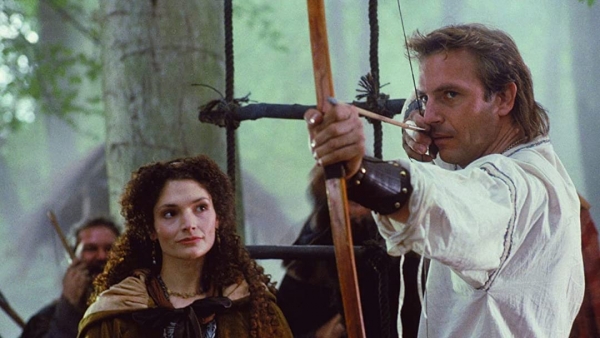 Too bad he can’t hit an accent like he can a bullseye.

I’d say this is probably one of the best examples of a shitorical film, but one that ultimately is every bit as entertaining as it is atrociously a-historical. This used to be my Number One example of Worst Historical Movie Ever, but over the years I’ve mellowed a lot and upon re-watching it, aside from Kevin Costner’s desperate groping for an accent, any accent, it’s a fun, unchallenging flick. And it is 100% improved with Alan Rickman being so beautifully, scene-chewingly, mustache-twirly eeevil, that I really don’t care how mangled the history is, it’s just bubblegum for the eyes. 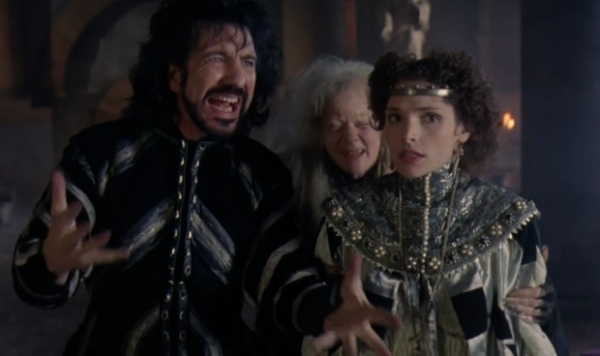 MFW I can’t understand WHY Costner can’t just PICK AN ACCENT AND STICK WITH IT.