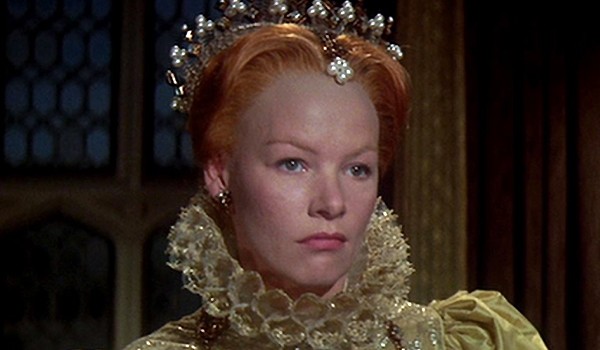 After Snark Week and our recent post on what movies and TV get wrong about 16th-century clothing, several people asked in comments and through social media if any movies or TV series get the period’s costumes right. You bet!

Snark Week was a time to have fun with the mistakes and hopefully educate some people about what isn’t historically accurate. But we spend just as much time here at Frock Flicks looking at movies we do enjoy. Plenty of productions have created amazing 16th-century clothing, so many that I had a hard time narrowing it down to just five for Friday. I even had to limit myself to the reign of Queen Elizabeth I just to stick to five — we’ll save some Tudor faves for another Friday!

So, with the further caveat that these are just mine, because Sarah and Kendra may pick different ones, here are five movies and TV series that showcase excellent, historically accurate Elizabethan-era costumes 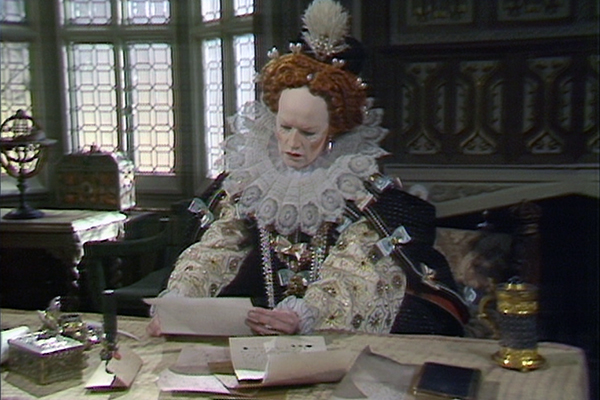 Just doing some paperwork, in my Armada Portrait gown, as you do.

Duh. But it’s the undeniable number one, most historically accurate 16th-century screen production, the all-time unbeaten champion. Glenda Jackson plays the queen impeccably, and many of the costumes by Elizabeth Waller are direct reproductions of portraits of Queen Elizabeth I. Read my full review from Elizabeth I’s birthday weekend. This one’s on Netflix and DVD, so if you haven’t seen it, you have only yourself to blame. 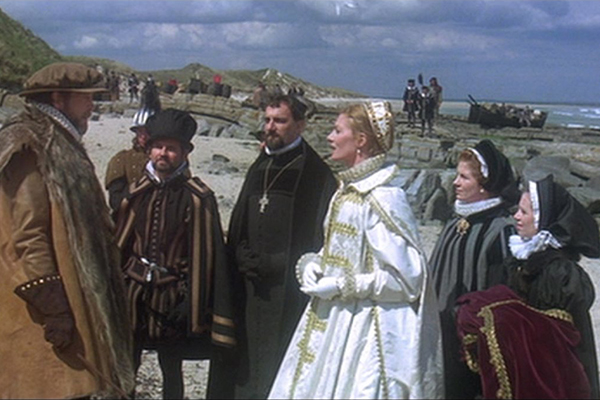 Glenda Jackson reprises her role as Queen Elizabeth and Vanessa Redgrave stars as Mary. The story is … well, there are many historical inaccuracies in the plot, and I’ll give a full review in another post. But costumes are quite accurate — costume designer Margaret Furse was nominated for Best Costume Oscar for this film, won the award for Anne of the Thousand Days (1969), and was also nominated for The Lion in Winter (1968) and Becket (1964). Unlike Thousand Days, this movie has women’s hair styled up and covered most all the time. The ruffs are well done. The characters wear a lot of appropriate outerwear — cloaks, hoods, gloves. Just a lot of appropriate layers in general, which adds depth to the appearance. There are even a few gowns that are trying to reproduce portraits of Mary, not as well as Elizabeth R did for QEI, but a solid effort. The story has real issues, but the costumes are worth watching for. 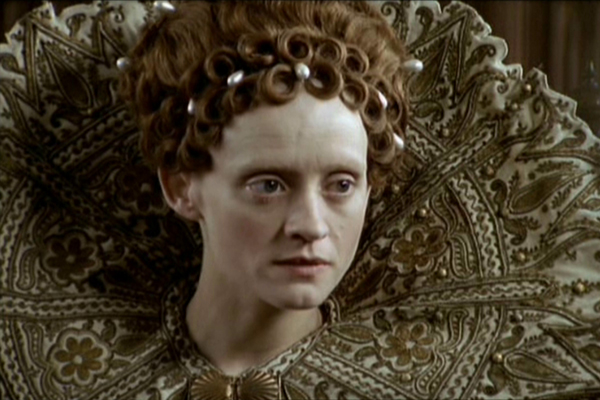 This one doesn’t get as much love as it deserves. Kendra did a nice write-up during our Elizabeth birthday celebration, so check that out for starters. What I enjoy about this interpretation of QEI’s life is the focus on her later years and, thus, the 1580s-1590s costuming, which is wacky and wonderful. Here we get the INSANE head-on-a-plate ruffs. They look just like the portraits, just as redonkulous, but right at the same time. I’m not as impressed by the acting / story, but for costumes? Sure, watch it. 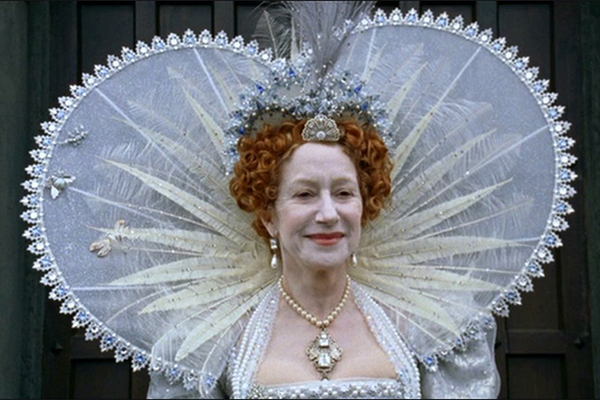 You can’t handle all of me.

I don’t have the mad girlcrush on Helen Mirren that Sarah does (I like her acting, she’s great and all, but Glenda Jackson will always be my One True Queen). Still, Mirren is admirable in this production. But let’s talk about the costumes. Mike O’Neil justifiably won the Emmy for Outstanding Costumes for a Miniseries, Movie or a Special due to Elizabeth I.  Not like he was exactly a n00b either — he did the costumes for Daniel Deronda (2002), The Last King: Charles II, the Power and the Passion (2003), and North and South (2004). The costumes here are solid Elizabethan with the right shapes and generous embellishment, though not they aren’t perfect (see: Tom Hardy’s perpetual unbuttoned state and an occasional floating ruff on the queen). 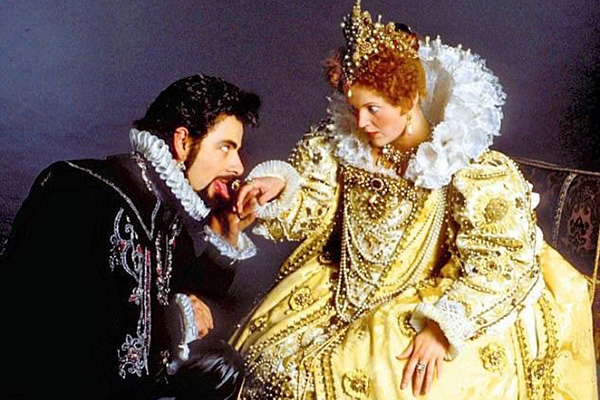 We’ve previously discussed Queenie — Sarah wrote about her during our QEI birthday reminiscing. The costumes by Annie Hardinge are really excellent for all the main characters. Lord Edmund Blackadder has a terrifically smart late 16th-century suit, and while he falls prey to the ‘wearing boots is sexy’ trope, otherwise, his look is quite historically accurate. There is so much detail with embroidery, obviously his Blackadder sleeve, but throughout the suit there’s beautiful trim with subtle beading that catches the light. Percy is wearing an amazing reproduction of a portrait of Robert Dudley, Earl of Leicester, favorite of QEI. Even Nurse is wearing a nice period outfit with a lovely wired coif, very similar to historical images.

Like I said, I limited myself to just five historically accurate Elizabethan movies and TV series. What are your five?