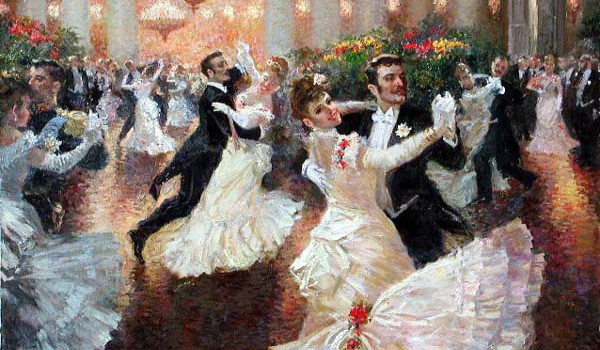 No list would be complete with out with recently widowed Scarlett O’Hara (Vivien Leigh) and roguish Rhett Butler (Clark Gable) shocking the socks off the Atlanta elite by leading off the Virginia Reel. This clip packs a two-fold punch: First, is the shocking (shocking!) auction of ladies to the highest bidder (but because it’s for war bonds and Melanie Wilkes says it’s OK, it’s cool). Then there’s the fact that Scarlett is barely into her first few weeks of mourning after the death of her first husband Charles Hamilton, and rather than be horrified that Captain Butler would consider pledging $150 in gold to dance with her, she practically jumps into his arms at the suggestion. Crepe skirts go flying, there’s fainting, and of course witty banter.

Time has mellowed my ire with Elizabeth and I’m now quite able to sit back and enjoy Cate Blanchett’s portrayal of Elizabeth I. In this scene, Elizabeth and Dudley (Joseph Fiennes — remember him? What’s he been up to lately?) barely manage to contain their attraction for one another while dancing the exotic Spanish dance that was Elizabeth’s favourite.

This is the gold standard face-off set to music and choreography that has been recreated hundreds of times in movies before and since, but I still think it’s my beloved BBC Pride and Prejudice (1995) that gets the tension between Lizzy and Darcy as mortal enemies pitch perfect. He’s doing Lizzie a favour by deigning to dance with her; she’s having none of it. They spar fiercely with words all the while keeping perfectly in step with one another. Two bright stars, seemingly polar opposites, attracted and repelled and yet, in total sync. I still love Darcy’s expression as he sarcastically utters the line, “This is no very striking resemblance of your own character, I’m sure.” These are not star-crossed lovers. These are two people who can barely contain their contempt for one another. It’s perfection!

One of the greatest scenes ever shot on film, in my humble opinion, is Kitty’s (Mia Kirshner) entrance into the ball. Unfortunately, the only clip I could find of it online is overdubbed in some language, so just try to tune it out and focus on how glorious this entire shot is.

Oh God, what can I say about this dance scene other than it is perhaps my all time favorite dance scene ever? Jane (Anne Hathaway) accepts a dance with her suitor, Mr. Wisely (Laurence Fox), whose attempts to woo her are putting her at odds with her feelings for another gentleman. I mean, we’ve all been there right? You’re at the dance with the guy you don’t really like, but who asked you and you felt you had no other choice but to accept, when all you’re really doing is scanning the crowd for that guy. The one you’re dying see. And, of course, he’s not there, so you make the most of it, as best you can, but your heart just isn’t in it … The resignation in Jane’s body language, the yearning of the music, the awkwardness of Mr. Wisely’s struggle to start up a conversation, and then the seamlessness in which it all changes … I love this scene, so you’ll just have to watch it.

I know there are more dance scenes out there, but these are just my top five. What’re yours?