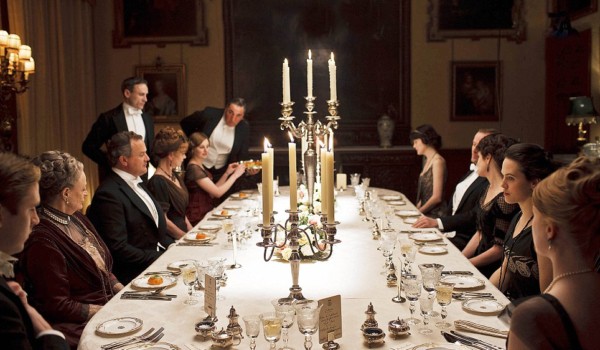 What is it about dinner parties that bring out the worst in people? At least, people in historical costume. Something about sitting around a dinner table means it’s time for a blow-up argument, a stunning revelation, and all kinds of drama. Here are a few dinners I’d find rather awkward to be a part of, even if they were rather fun to watch onscreen.

Smarmy, slimy, pompous, and obsequious Mr. Collins makes everyone uncomfortable at the Bennet household. His “compliments” are a thing to behold.

With a first episode titled, “The Poisoned Chalice,” you should question every meal and glass of wine in this show. One scheming cardinal getting poisoned at the dinner he planned to poison another scheming cardinal is only the beginning!

Hi, folks! Surprise, I survived the war! Yeah, I know, it’s been two years and you all thought I was dead, but I’m back to marry my sweetie Elizabeth. Oh, wait … um … AWKWARD…

Claire and Jamie’s Parisian machinations come to a head in the ‘La Dame Blanche’ episode with an attempted rape delaying dinner and a fight breaking out at the end of the meal. As the Duke of Sandringham (Simon Callow) sadly notes, “I was so looking forward to dessert.”

How convenient of the Dowager Countess to invite Minister of Health Neville Chamberlain over for dinner. Because Lord Grantham is ready to burst an ulcer. Talk about a spit-take!

What other awkward dinner scenes can you think of in historical costume movies and TV series?