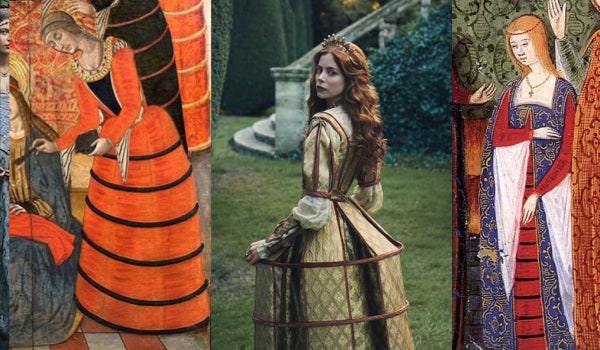 We have been all over the Starz TV miniseries adaptation of a Philippa Fucking Gregory book, The Spanish Princess. This production purports to tell the story of Catherine of Aragon, the Spanish princess who married first Arthur, Prince of Wales in 1501 and then Henry VIII, King of England in 1509 — the first decade of the 1500s. We previewed the costumes, did a deep analysis of Catherine’s wedding dress, recapped every episode, and discussed how much the production fucked up the actual history (hint: really, really badly). Well, now we need to turn to an in-depth analysis of the costumes. Today we’re going to look at the Spanish styles worn by Catherine, her sister Queen Juana of Castile (aka Juana la Loca), and her ladies-in-waiting. Stay tuned for another post where we’ll look at the English styles.

For an expert analysis, we turned once again to Kate Newton, Mestressa Beatriz Aluares de la Oya in the SCA, who has spent years studying late 15th/early 16th century Spanish costume, and who offered her expertise to our post about Queen Isabella of Castile’s wardrobe in 1492: Conquest of Paradise. Kate admits she hasn’t been watching The Spanish Princess, just watching in horror from afar, so I sent her a number of images of the Spanish characters and asked her to weigh in on what the show got right and wrong.

I have one overarching problem with nearly all of the Spanish fashions in the show, and that is that none of it is really contemporaneous for Catherine of Aragon or her sister Juana of Castile. Catherine of Aragon was born in 1485 and was Queen of England from 1509 to 1533. Juana was born in 1479 and was Queen of Castile from 1504 and Aragon from 1516. The bulk of the Spanish-coded clothing in the show would have been more appropriate for their mother, Isabella of Castile, than for either girl to wear in their young womanhood. 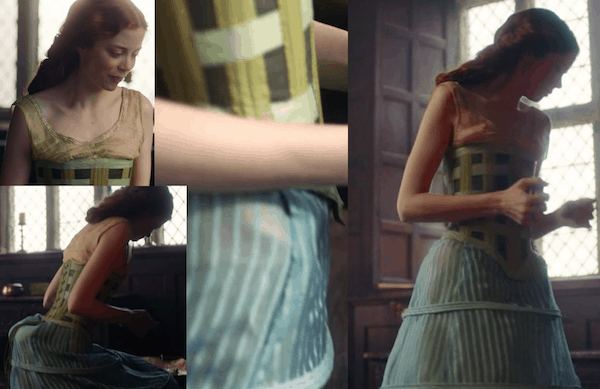 Catherine’s undies are pretty easy to pick apart. It looks like she’s wearing some sort of Victorian-esque combinations or chemise under her corset and hoop, as well as a bum roll that’s more visible in the lower side shot. As far as costume historians are aware, the Spanish didn’t wear corsets until well out of the Renaissance [Kendra adds: nor were they some kind of woven ribbon craft project]. Also, while the Spanish wore hoops, aka farthingales in English or verdugados in Spanish, these boned skirts were meant to be seen. 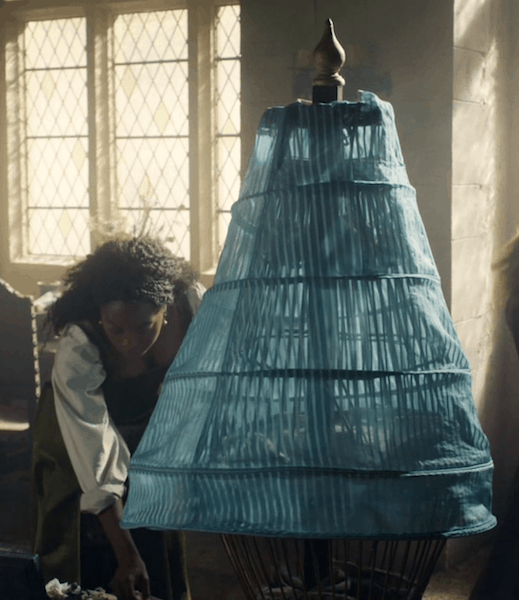 Another complaint I have with this farthingale/verdugado is that it’s too conical — most of the Spanish imagery shows boned skirts that are more bell-shaped.

Detail from “The Birth of John the Baptist.” Pedro Garcia de Benabarre, c. 1483.

The above image shows the boned verdugado worn as an exterior garment, and demonstrates the narrow bell shape of the skirts. The roundness at the top of the skirt is probably formed by fabric tension rather than a bumroll or pad. 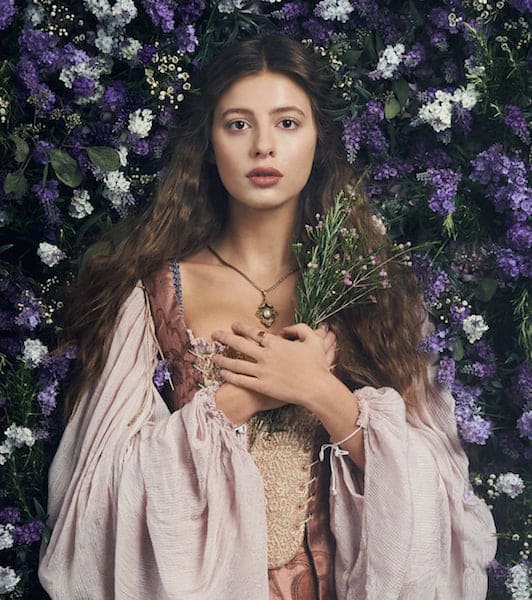 These images of Rosa show a couple of things that the show gets almost right. The enormous chemise and the stomacher with lacing can both be seen in period images like the following; however, the camisa sleeves were usually open at the wrist and would not have been gathered to a ruffle at the neck [Kendra adds: okay, I hated these chemises on screen, and ranted about them in my recaps; I stand corrected].

Detail of “The Marriage at Cana.” Master of the Altarpiece of the Catholic Kings, 1496-97.

Detail of “Nativity of the Virgin.” From the workshop of Pedro Garcia de Benabarre, 1480. 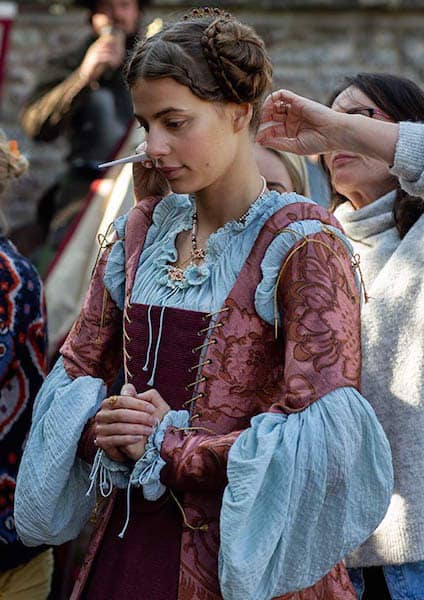 Further, the stomacher would more likely have been laced under the over dress rather than to it, although there are exceptions to this.

Detail of “The Altarpiece of Saint Peter. Pedro Berruguete, 1485. 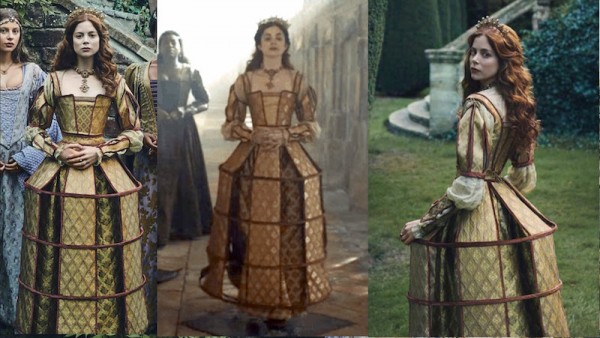 sigh This dress makes me so mad because it’s such a fascinating style, and they’ve just completely stuffed it up. The skirts are most likely a misinterpretation, but I have no idea where they got the bodice. The whole thing looks angular and weird, and it’s too damn short. Ankles. We don’t have any.

My guess is that it’s based on this:

The image is of a female demon (hence the duck feet) wearing a verdugado with a paned overskirt [Kendra adds: in other words, there is an overskirt cut in multiple wide strips, you can see two at the center front here, and one on the side, so this would probably have at least six panes or panels]. You can see all the typical features of Hispano-Flemish clothing: the boned skirt, separable sleeves, full camisa, paned overskirt, and soft fabric belt.

The interpretation pisses me off because this is probably my favorite outfit. Even with the duck feet, which probably would have improved the TV version considerably. 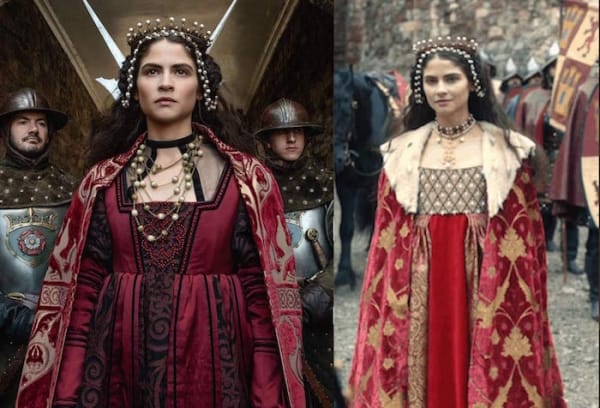 These super short bodices are atrocious. They’re much better suited to Romeo and Juliet than to anything that came out of Spain. I have one wild guess — the costumer may have looked at a painting of Spanish people painted by someone who was not Spanish, like the following:

This image represents an event that occurred in 1492. As you can see, the waistline of the dress is actually a little above the natural waist and not up under the bust. So yeah, creative license.

All of Juana’s dresses hurt my head. And would someone please cover these ladies’ heads? Good lord.

2. These Skirts Are a Pane in the Butt 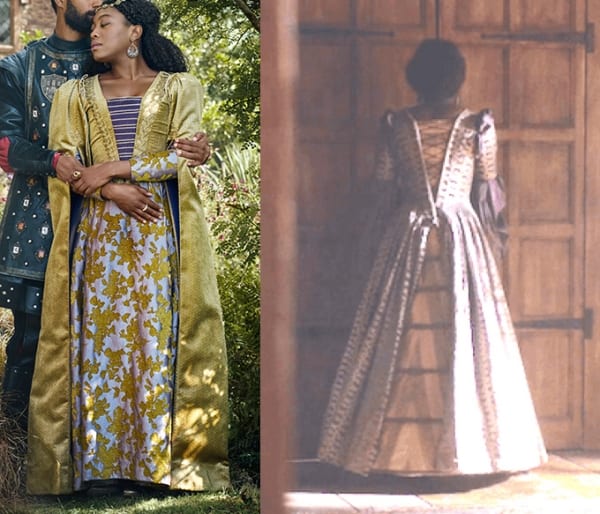 I do not understand these splits. The Spanish had paned skirts, as seen in previous examples, but these are so wide, and I’ve never seen only two splits. Usually there are four to eight panes or just a front split. I’ve also never seen a gown like the one on the right — it looks like the front and back are cut identically, and that’s just not a thing. Either that or her head is on backwards [Kendra adds: note that THE BODICE IS ALSO CUT WITH A V OPENING, OVER A BACK STOMACHER, WHICH IS FUCKING RIDICULOUS]. 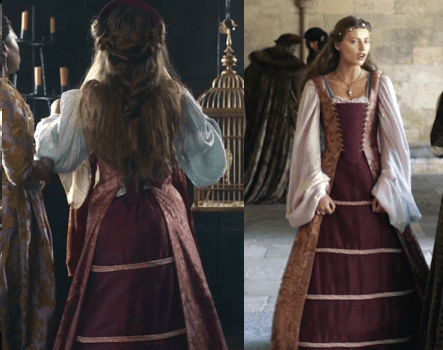 IT’S CROOKED WHY ARE THE STRIPES SO LOPSIDED?? They should be straight, because bands like that cover the reeds that give the verdugado its shape. In these examples, there’s some sort of understructure that is letting the underskirt float freely, and that combined with the weird split in the back is causing the underskirt to crumple and collapse. Stupid, sloppy, and lazy. 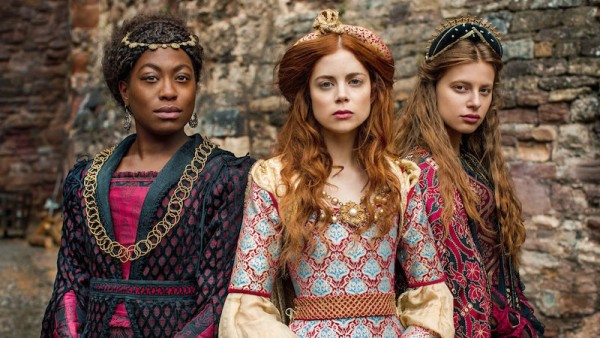 Boy, they really cleaned out the home decor section of Jo-Ann’s with this show, didn’t they? I don’t think I’ve seen so much Moroccan print since the last time I searched Pinterest. It lends a nice, exotic touch to the clothing and definitely codes these ladies as “foreign,” but there’s not much basis in history.

And, Before You Think We’re Too Judgy…

Watch for an analysis of the English costumes coming soon! Massive thanks to Kate for her expertise and time.