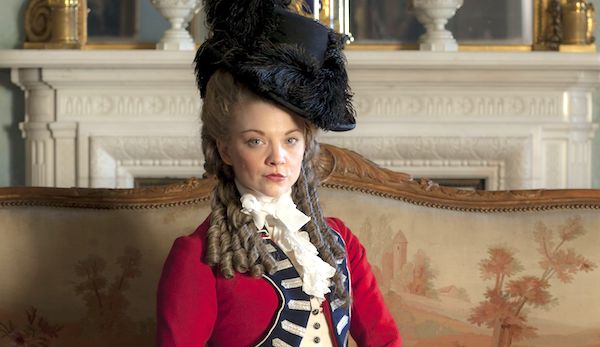 Back in 2019, Trystan wrote: One of the greatest frustrations in running this site is updating our Upcoming Movies page. We hear about so many potentially interesting frock flicks, and we scour IMDB and the trade press for premiere dates, but some things just don’t show up in our part of the world. You’d think in this digital streaming on-demand video age, all content would be at our fingertips regardless of where you live, but nooooooooooo! At least not legally. And while, yeah, we sometimes resort to underhanded means to find really tempting frock flicks, ethical issues aside, it’s a hassle and it’s hard to guarantee quality.

And, she’s so right! Here’s five more films or TV series that I just can’t believe haven’t been released in the US. I mean, I know that distribution rights for foreign films/TV series can be complicated, and we Americans are used to waiting a year to watch the latest BBC period piece. But this is getting ridiculous!

Two I was going to add to this list are Banished, the eighteenth-century-set Australian penal colony series that I definitely recommend. It’s finally on Hulu and Apple TV, but that took years! The other is Casanova, Last Love — aging Casanova, yawn, but hey I love the period — and that’s finally on Amazon. I’m adding it to my wishlist, expect a review soon! Sheesh. Both took FOREVER!

Okay, so this one is a “me” problem. This French film tells the story of the Dreyfus Affair, a Big Deal in French history but probably a story that doesn’t register much in the US. In 1890s France, an army officer (Alfred Dreyfus) was falsely convicted of espionage. He was of Jewish descent, and the affair kicked off a huge reckoning about antisemitism in France. As someone who studied modern European history as an undergrad, I remember learning about how pivotal this was in French history, so I’m interested on a true history geek level.

The film was directed by legendary director and sex offender Roman Polanski (Tess, Chinatown), which means it should be high on the radar, although maybe the Me Too movement is finally having an effect and Polanski is getting the cold shoulder from the Hollywood? But it stars super hotties Louis Garrel and Jean Dujardin, and that’s in its favor! It was released two years ago in France, and that’s more than enough time for this to at least turn up on Netflix or something.

The costumes were designed by Pascaline Chavanne (Renoir, Augustine, 8 Women): Check out the trailer to see what we’re missing:

Okay, honestly I needed a fifth film to round out this post. I’m not the least bit surprised that a TV miniseries about the most important female ruler of the 18th century (rivaling Catherine the Great), Holy Roman Empress Maria Theresa, hasn’t been released here, because for some reason she doesn’t register on American consciousness in the way Catherine the Great does. But still, money was clearly spent, and Americans need to learn about history that is not their own! Most importantly, I snarked the hell out of it in 2020, so you should be able to watch it so you can fully enjoy my genius! At the time, there were full episodes on YouTube. Now I’m finding mostly clips, although I’m not digging as deeply as I should.

ANYWAY, the film tells the story of Maria Theresa from before ascending the throne (1723) through middle age (1743). It’s actually decently made, with entertainingly shitty costumes in the first two episodes and much improved costumes in the last two.

The costumes were designed by Ján Kocman: Here’s the trailer in German, although you can definitely find lots of subtitled clips (and maybe full episodes?) on YouTube:

I raved about this Mexican TV series about Hernán Cortés, famed Spanish conquistador who conquered the Aztec empire. I had to resort to a very dubious site to watch it, and that’s ridiculous. Okay, so there are questions about whether telling Yet Another European Conquistador story is appropriate given the lack of films about indigenous peoples and BIPOC peoples. And there were a few questionable costume choices and a lack of extras. But once again, MONEY WAS SPENT, so you’d think the producers would want to earn some of that back? The series was released worldwide, EXCEPT for the United States. More importantly, the series does a relatively good job at sticking to the actual history, and the whole myth that has surrounded European explorers is so fundamental in the US (see: Columbus) that a better understanding of what really happened would be very helpful for Americans’ understanding. Plus, Spanish is the second most spoken language in the US, so I would think there’d be a market for this, subtitles or no!

The costumes were designed by Mónica Neumaier and Natacha Fernández Gallardo: Okay, this one KILLS ME. IT’S A BRITISH PRODUCTION (no subtitles needed!). IT STARS NATALIE DORMER (The Tudors, Game of Thrones). IT’S SALACIOUS (sexytimes in the 18th century! Divorce! Sisters doin’ it for themselves!). IT’S BEAUTIFULLY COSTUMED. Why the HELL hasn’t PBS, Amazon, Netflix, Hulu, SOMEONE picked up this miniseries about real-life eighteenth-century aristocrat Lady Seymour Worsley, who married a jerk who forced her to sleep with other men, then left the jerk for another guy, then had to defend herself in court in an infamous divorce case? Check out the trailer for a glimpse of the fabulosity:

Oh my god, I wrote this post late last night y’all, and half the reason was to rant about HOW and WHY this film isn’t available in the US FOUR YEARS LATER. But it was late, and somehow moving things around made me lose this one, and apparently I can’t count because there are only four titles listed above. I am an idiot!

Anyway, this French film is based on a fascinating true tale of two princesses: Mariana Victoria of Spain, who was engaged to French King Louis XV; and Louise Elisabeth d’Orléans, daughter of the French regent who was married to Spanish King Louis I. Both were sent to each others’ countries, and both returned to their homes eventually for different reasons.

Not only do I REALLY WANT TO WATCH THIS FILM… it’s French, and French films generally do decently in America. It’s based on a book by the author of Farewell, My Queen, and after reviewing the trailer, I read that book and it was GREAT. Okay, the movie will inevitably be less good, but it’s such an interesting story and very well researched and written. And for me, it’s set in a period (1720s) that you don’t generally get to see on screen, even if my trailer preview told me that the costumes aren’t terribly specific to the period. The film is available from Apple TV…. just, not in the US, which is ridiculous.

The costumes were designed by Fabio Perrone (Black Venus): There’s a subtitled trailer (and actually searching for this, I just found there’s an un-subtitled version on YouTube, so I’m going to have to practice my French and watch this, stat!)

Do you have any idea WHY these films/TV series haven’t made it to the US? Have you managed to watch any of these, and if so, what’s your take?