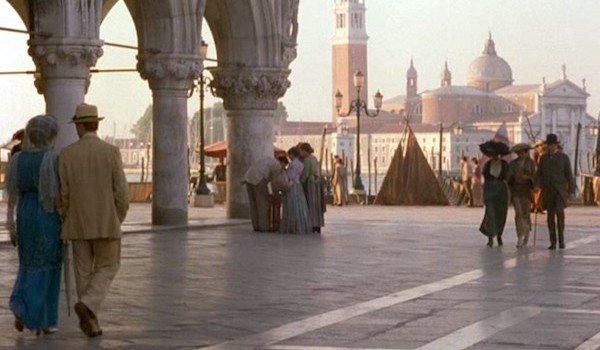 Two of your Frock Flickers just went to carnival in Venice — Trystan and I had a blast! So I’ve got Venice on the brain. I thought it would nice to take a look at some of the top frock flicks set in the Serenissima, particularly those that evoke a sense of the city. Of course, a number of costume films have been set there, including the various versions of Othello, Brideshead Revisited (1981 and 2008), and Effie Gray. But these five films rise to the top! 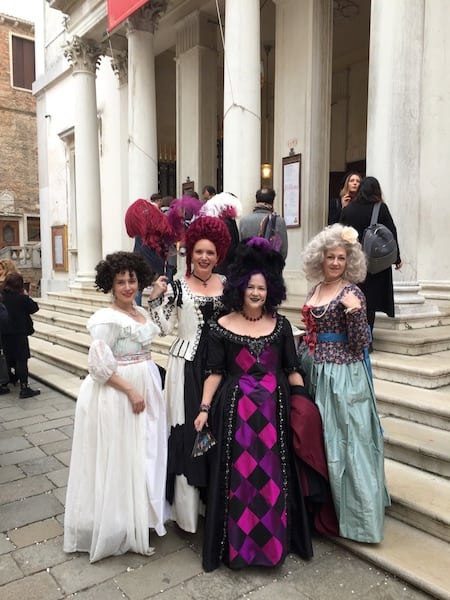 Kendra (magenta wig and feathers in back) and Trystan (black with pink/purple diamonds) about to attend the opera in Venice with friends Leia and Lisa. 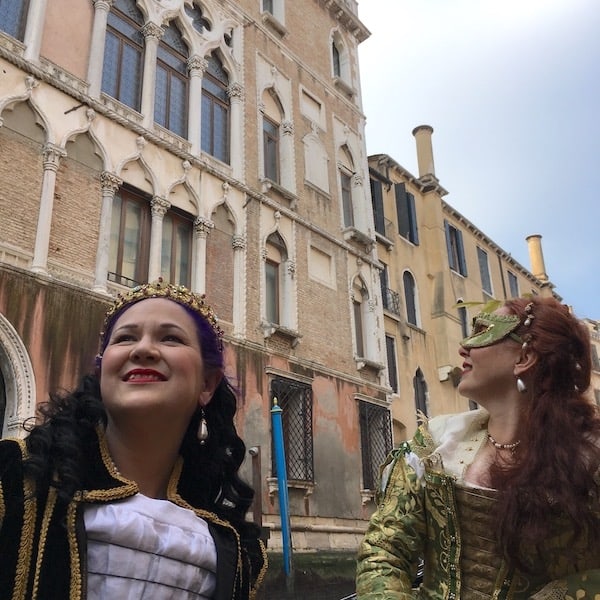 There have been multiple films about Casanova, and probably most of them are “set” in Venice. My favorite is probably the David Tennant version, but none of it was filmed in the city. For a better flavor of Venice, watch this Heath Ledger film, which WAS actually filmed on location in Venice. 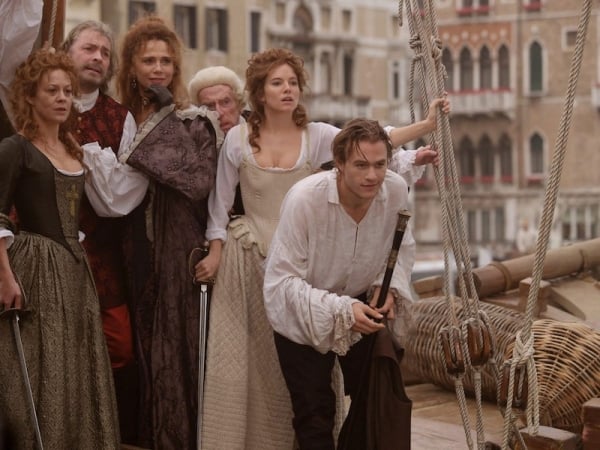 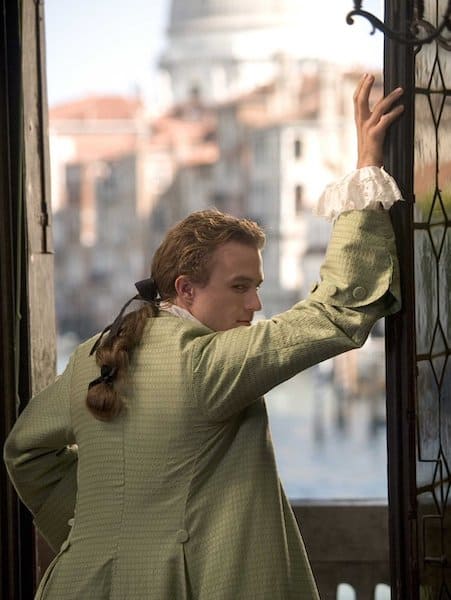 Beautiful shots of the city. 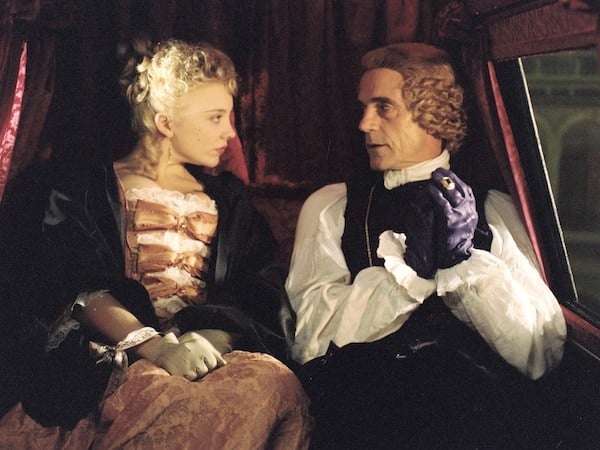 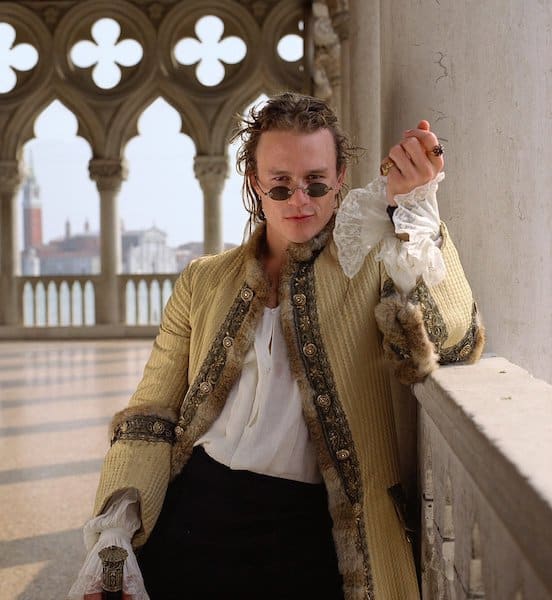 Everyone raves about Piero Tosi’s costume designs in this Edwardian-set film that was indeed filmed in Venice. I’ve heard so many good things that I was even fired up to watch this, until I read that it’s basically about a pedophile having the hots for a younger man (okay, and seeing reviews that constantly mention the word “slow” — if it was a fast-paced, action-packed movie, MAYBE?). Feel free to stone me! 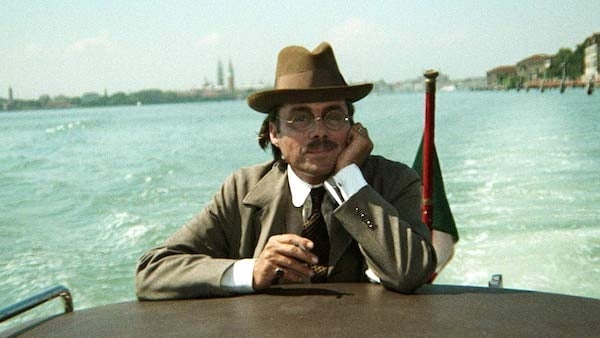 We arrived on a water taxi, and it was totally The Way to Arrive in Venice! 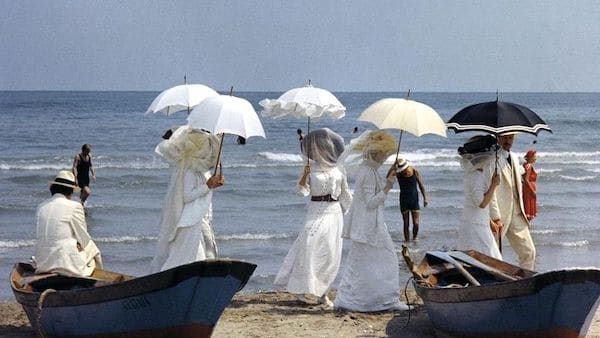 Much of the film takes place at a grand hotel on the Lido beach, a narrow barrier island. 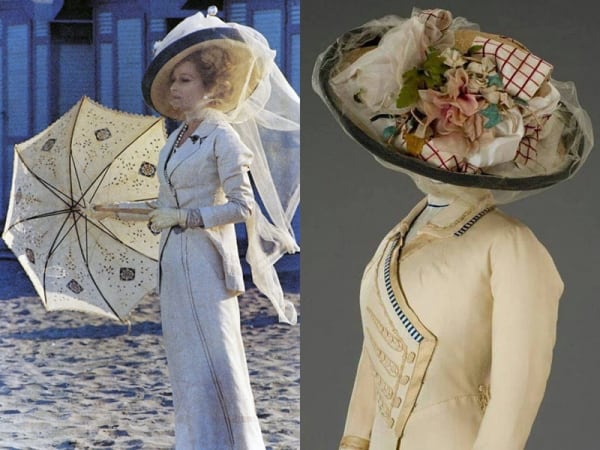 And yeah, the costumes look amaze-balls. 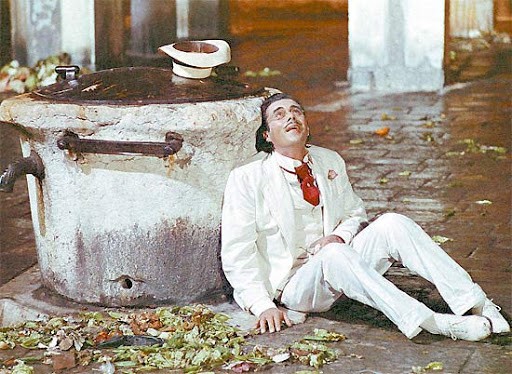 I can admire that that’s one of the wells that are at the center of Venice’s many campos, while I roll my eyes at the pedophile having a sad. 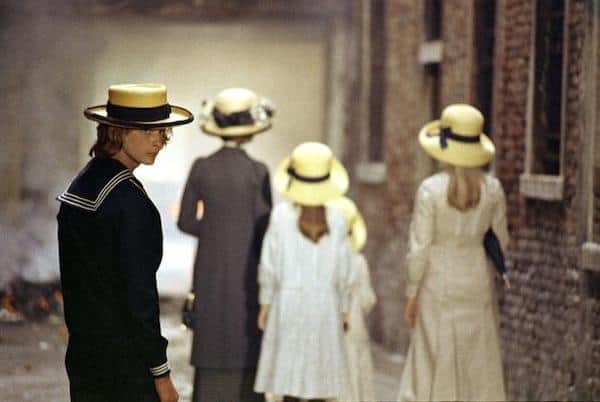 Definitely looks like you get a look at the city, tho!

Here’s another one I haven’t seen, and you may stone me when I tell you that I don’t get terribly excited about Shakespeare (I had a great high school English teacher who made King Lear come alive, and sure Much Ado About Nothing is great, but otherwise I generally feel like I have to work too hard to appreciate any nuances; I KNOW, I’M A HEATHEN! I do nerd out about many other historical writings/theater!). That being said, this version of The Merchant of Venice was indeed filmed in Venice, and critics love to wet themselves about how good it is, so I feel morally obliged to include it! 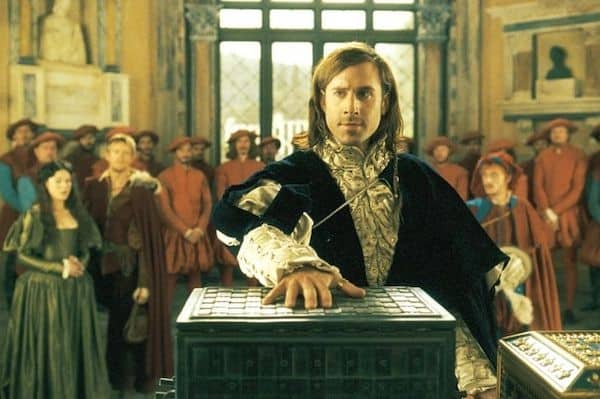 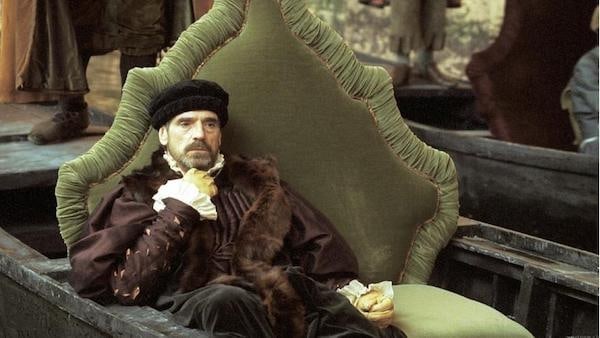 I NEED THIS GONDOLA 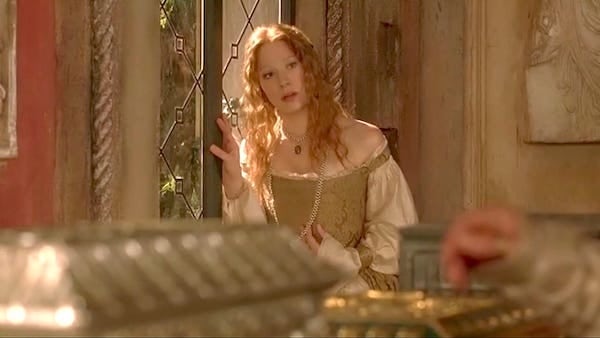 The costumes look pretty, if stripped down. 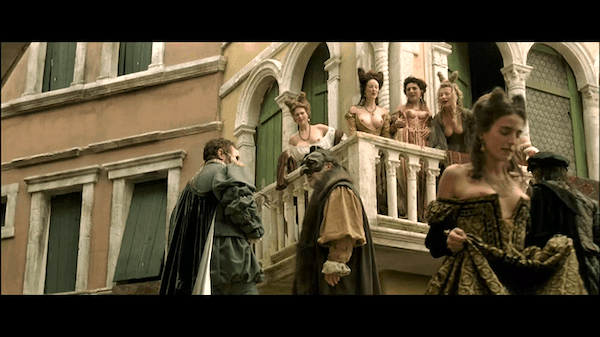 This had better be a brothel! 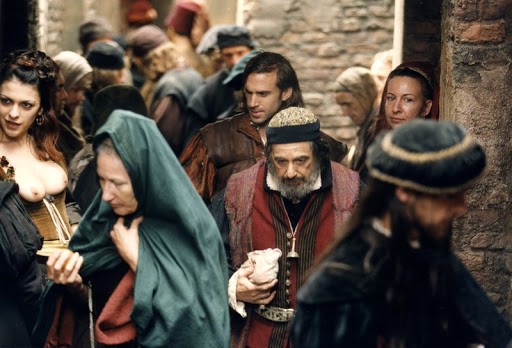 #titsout is a thing, apparently, but I like seeing the ancient city.

Okay, so the movie is cheesy AF while also being a total guilty pleasure, and the costumes are crazytown but also based in actual history. When I watch the film, I always feel like they’re on a set, not the real deal, but this was actually filmed in Venice … and despite the staginess of the sets, I DO feel like I get a sense of Venice as a Renaissance city and the centrality of courtesans to that era. So, it’s a good one for enjoying Venice’s golden age! 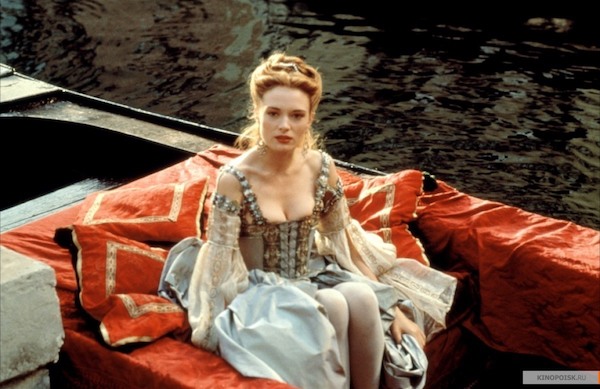 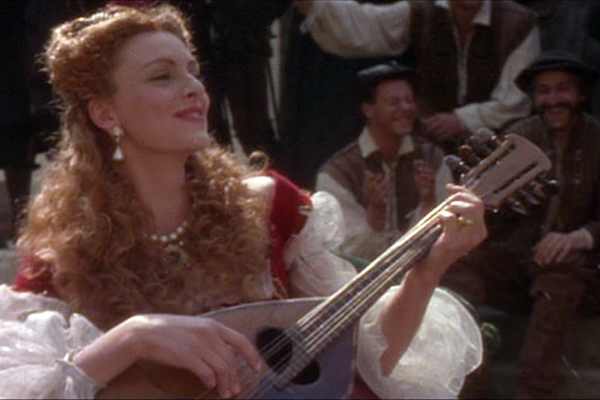 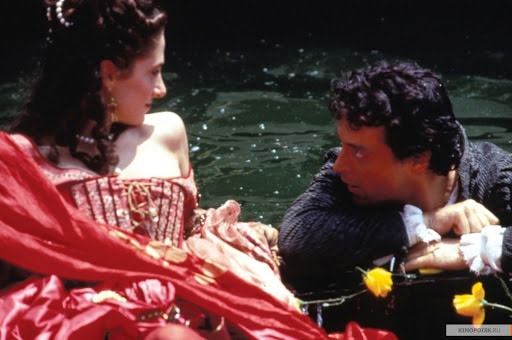 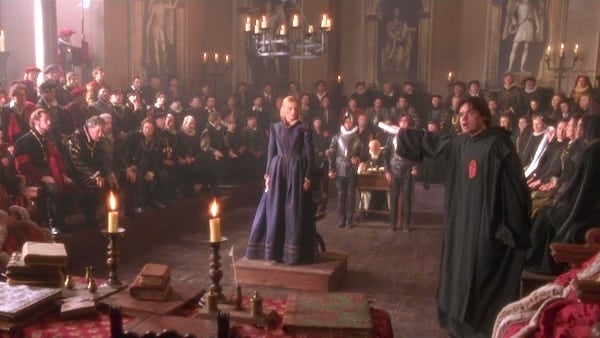 The interiors are evocative. 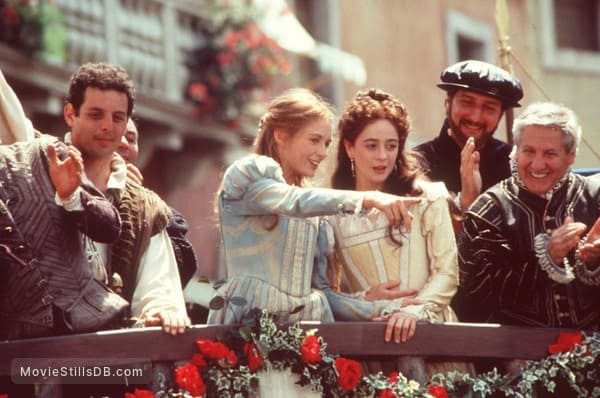 I do love the whole “public festival” feel of these scenes.

And there are literal gondolas and bridges and canals!

The characters’ dress is very Venice-inspired, from Fortuny-type gowns to Venetian blues. 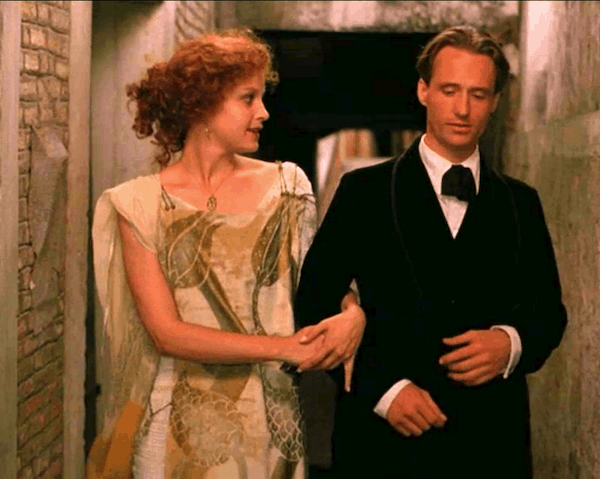 I love all the street wandering they do, at night… 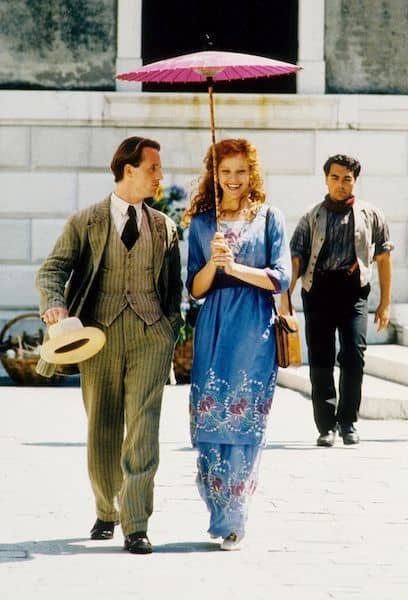 …and during the day! 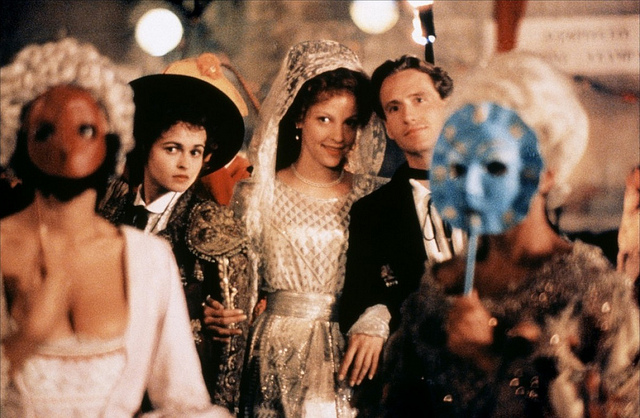 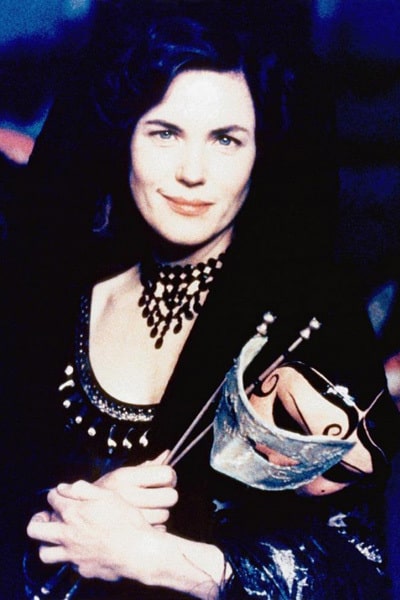 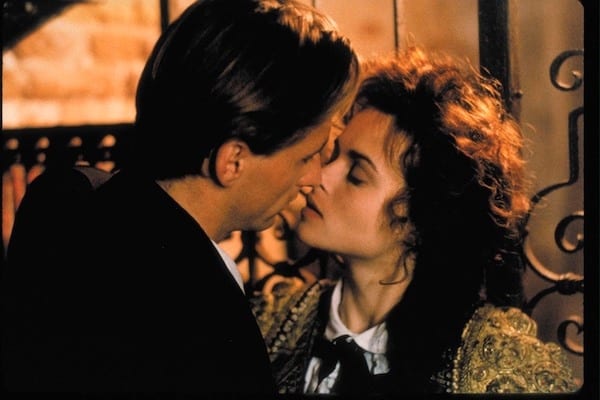 And you can’t go wrong with a costumed shag. 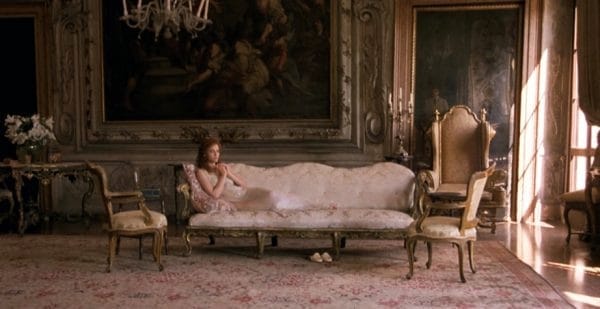 I LOVE the scenes set in the faded palazzo.

And the picnic on the steps of the Santa Maria delle Salute church is just stunning! 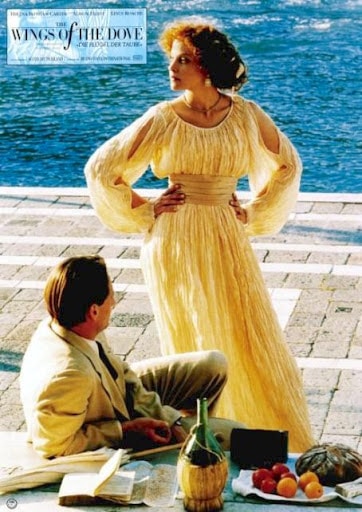 Wearing Fortuny-esque gowns for that picnic.