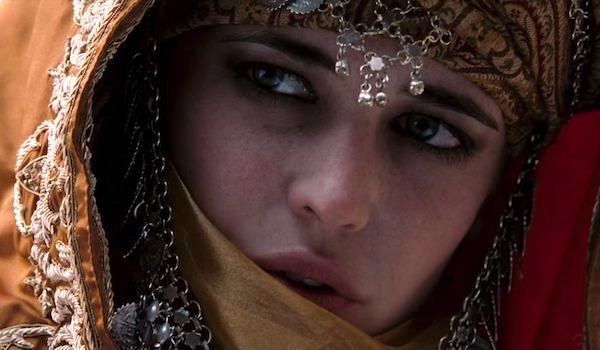 At Frock Flicks, our expertise is the history of fashion, but we can’t be experts in every specific period or place. We often go ahead and review films and TV series set in eras or places we don’t know, but we prefer to have SOME knowledge of what we’re talking about. Sometimes we’re able to pull in a guest expert, which makes us so very happy! But there are certain titles, periods, or eras that we just know too little about, and so we’d love to have an expert either write a review, or at least consult with us about the film. So, if you’re an expert in any of the below periods and/or places, get in touch! We’d love to have your help.

Side note, we wrote a whole post about Vikings and how we were pretty sure it was all WTFrock, but we don’t know enough specifics to comment. We’d still love someone to review that for us!

We’ve mentioned it numerous times, but we’ve never done an in-depth review of the film’s costumes. That’s not because we don’t know something about American fashion in the 1860s, but more that the film itself is SUCH a complicated piece of American history and folklore with so much resonance today, and we just don’t feel right about reviewing its costumes without talking about how those relate to the real history of racism and slavery. Tom and Lorenzo wrote an amazing post on their blog looking at the design of Scarlett’s first dress and how that relates to these issues; we’d love to have someone who knows the fashion history but also can speak with authority about race and slavery in both the 1860s, 1930s, and our current period in terms of history and cinema. If that’s you, contact us! 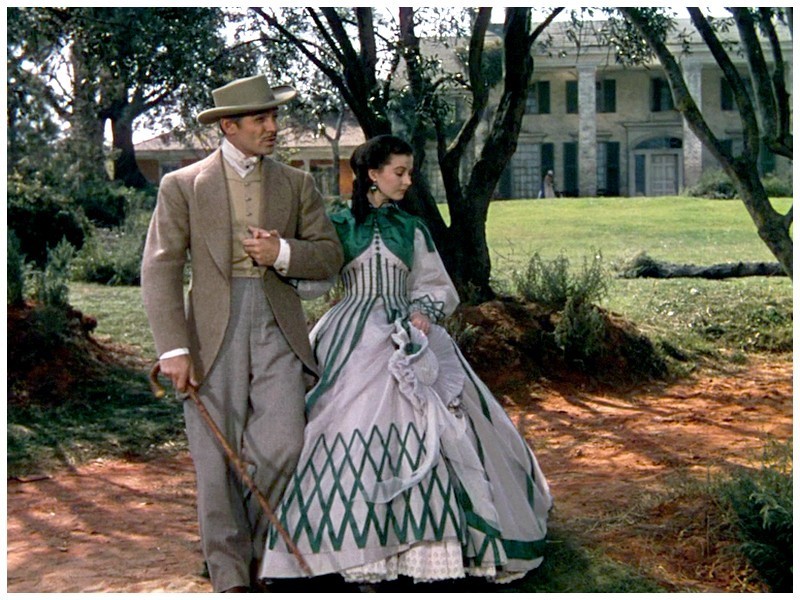 Sure, we’d all be interested in knowing how well this captures mid-1860s fashions. 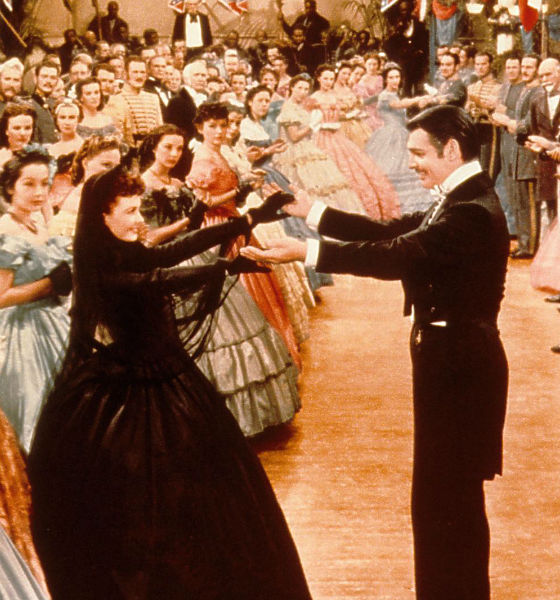 But even more, we’d like an analysis of how this film and, especially, its costumes figure in our modern understandings of race, slavery, and American history. 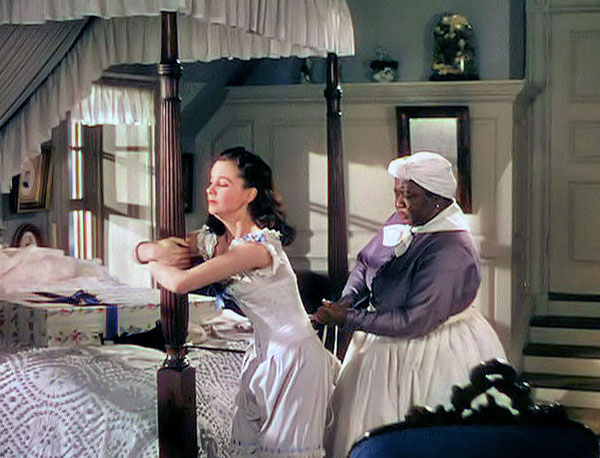 We all know that the African American characters are relegated to the background. 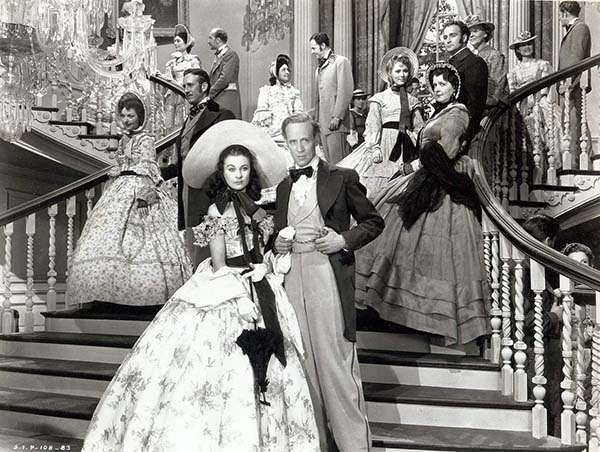 But this film has and continues to play SUCH an iconic role in American culture, that it would be irresponsible to look at the costumes on a solely design level.

Korea churns out a LOT of period TV series, and they are hugely successful. We’d love to know more about them all! Because sadly, all we can say is “pretty.” We did review The Royal Tailor (2014), but that’s just a drop in the bucket, and we were barely able to scratch the surface in terms of looking at historical accuracy. If you know ANY era of Korean fashion, please get in touch, because we NEED to know more about series like: 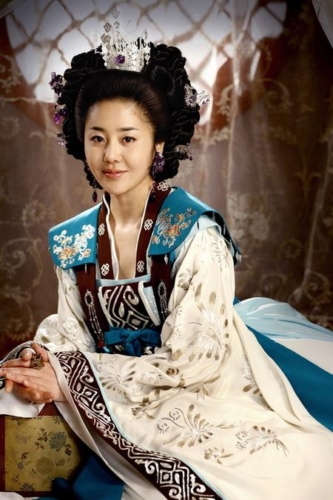 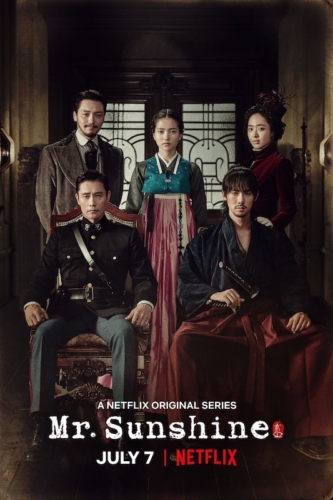 Mr. Sunshine (2018): set in Hanseong (present-day Seoul) in the early 1900s, and focused on activists fighting for Korea’s independence. 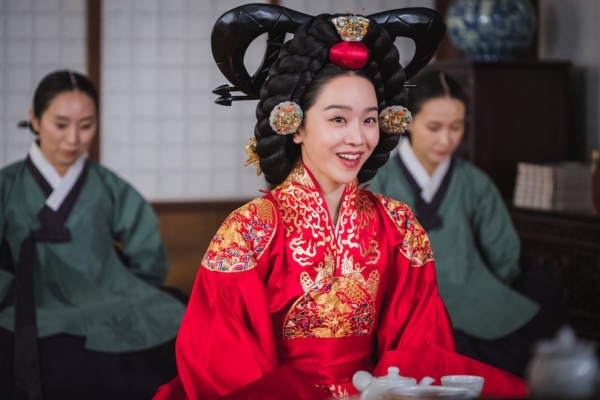 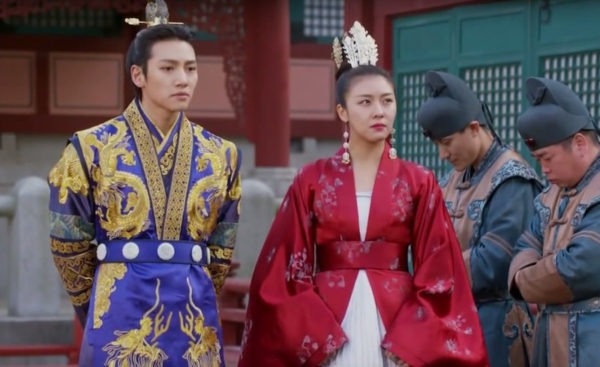 Empress Ki (2013): about the real-life empress, a woman who ascended to power despite the era’s class restrictions, eventually marrying the emperor in the Yuan dynasty (1271-1368).

Set during the Crusades in the 12th century, a French blacksmith goes to fight for the Kingdom of Jerusalem. This means LOTS of Middle Eastern dress, plus costumes worn by Eva Green as Queen Sibylla of Jerusalem. We’re guessing the women of the crusader kingdoms wore Western dress, but did it have its own specifics? And what was worn by Egyptian/Syrian rulers and soldiers? We don’t know! We’re hoping maybe you do? 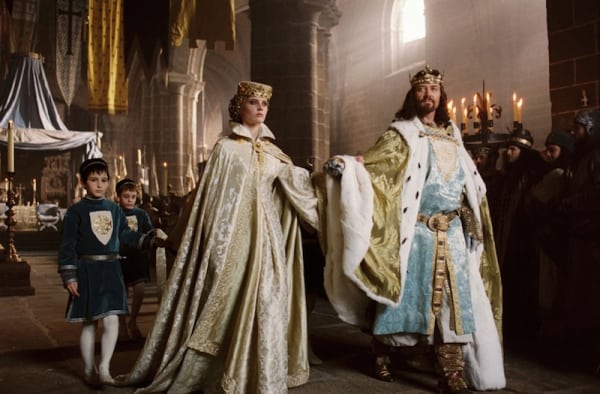 Because, Kendra, who is writing this post, can only say “it looks medieval?” 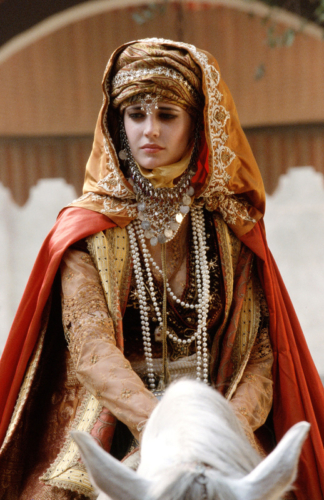 Although she gets VERY dubious when she looks at all this Middle Eastern-inspired stuff on Queen Sibylla. 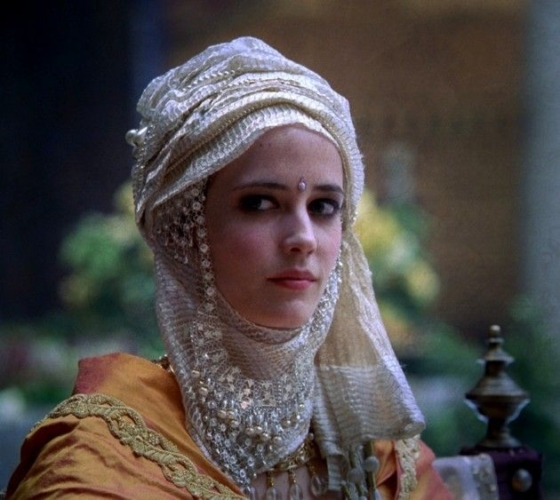 Maybe they did mashups! I have no idea! Of course I doubt it, but your informed snark will be much better than my dubious face! 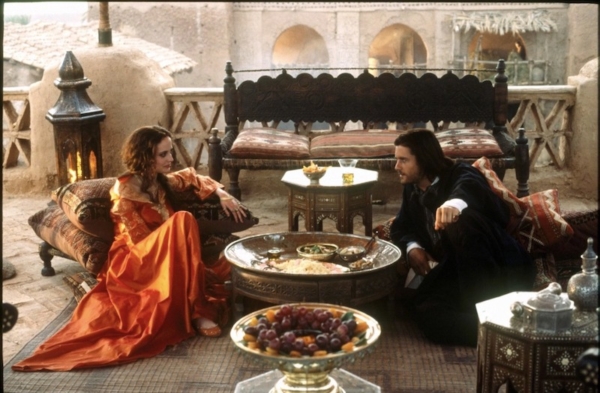 Did they lounge around in Game of Thrones dresses? 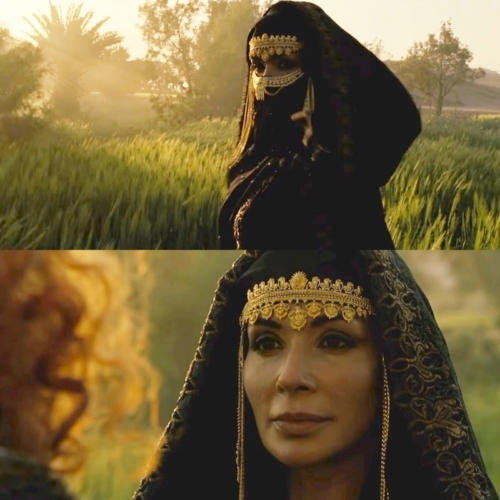 And then is there anything historical about this on Giannina Facio as Saladin’s sister?

This film, set in 1930s-40s Japan, won costume designer Colleen Atwood an Academy Award. But literally every time we’ve posted images, people have popped up to say that Atwood made some major tweaks to traditional Japanese kimonos (and other aspects of dress? I don’t know!). None of us know kimono well enough to comment! And we’d LOVE to know! So please, for the love of frock, tell us! 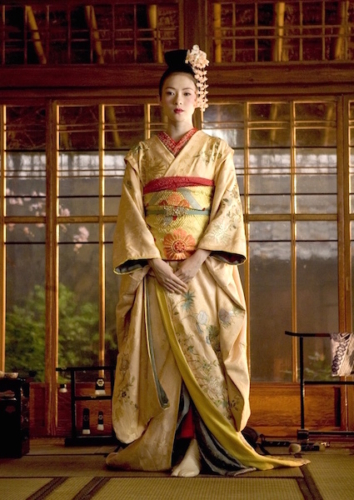 All we can say is “pretty”! 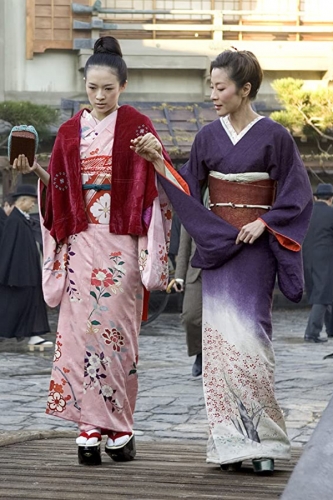 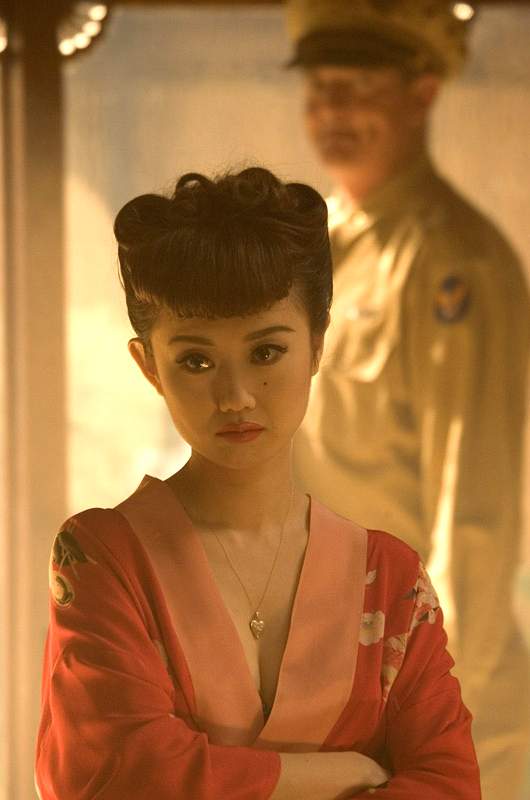 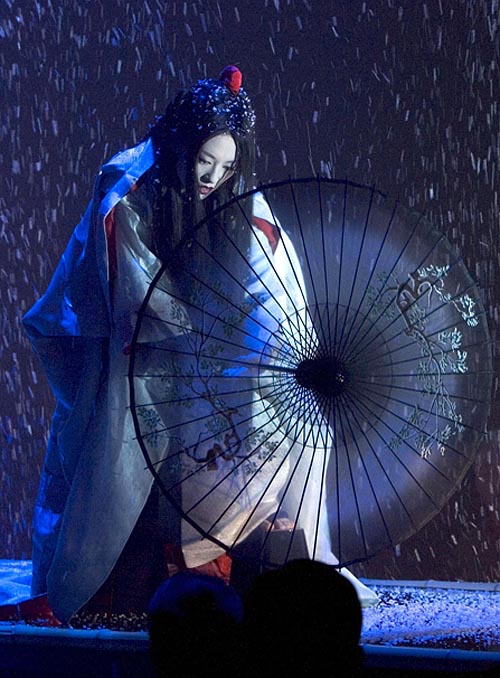 I am all ears!

Okay, this one may seem totally random to you, but it is literally my dream to get one of y’all to write a post about how historical films and TV shows fuck up horses. Not just the type of horse shown, but also the bridles and other gear as well as horse-riding styles and techniques. Because every time we post an image from a frock flick in which there’s a horse, someone pops up to tell us about how the “cavesson” is wrong, and we don’t know what a cavesson IS! I think what makes me so happy about these commenters is that they are another version of My People(TM), and reading their commentary must be what it’s like for non-fashion history people to read our reviews. They’re probably wondering “what the HELL is a ‘grommet‘ and why does it matter??!!” So I’d love to give you a forum to geek the hell out, so long as you explain your terms so a non-horse person like me can understand.

Here’s a few examples that make me laugh and scratch my head all at the same time: 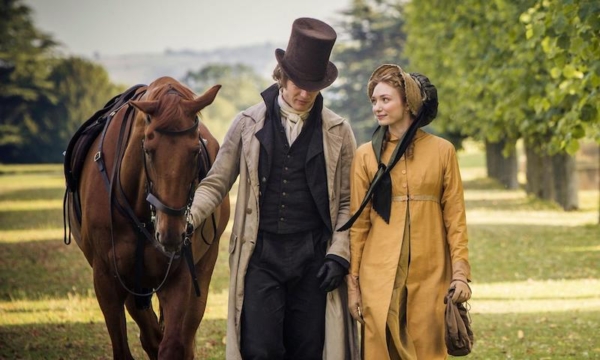 We posted this image from Death Comes to Pemberley (2013)… 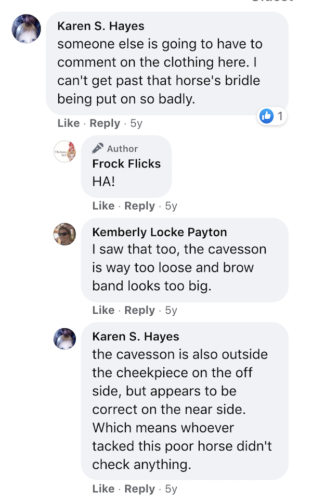 And this is what resulted! 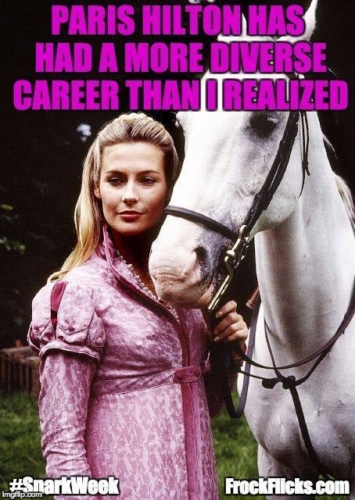 This Snark Week meme — making fun of Duel of Hearts (1991) — got all KINDS of chatter going among the horsey types! 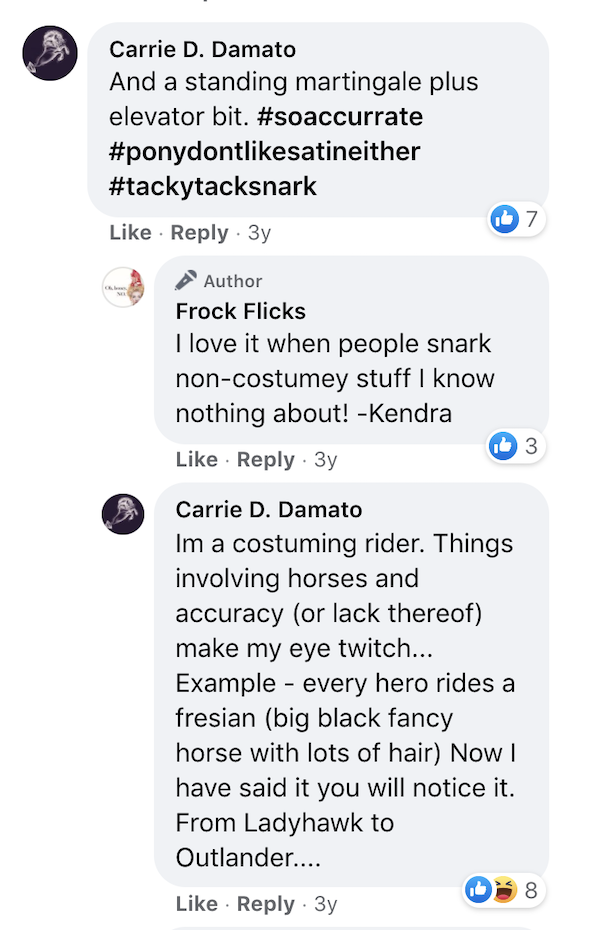 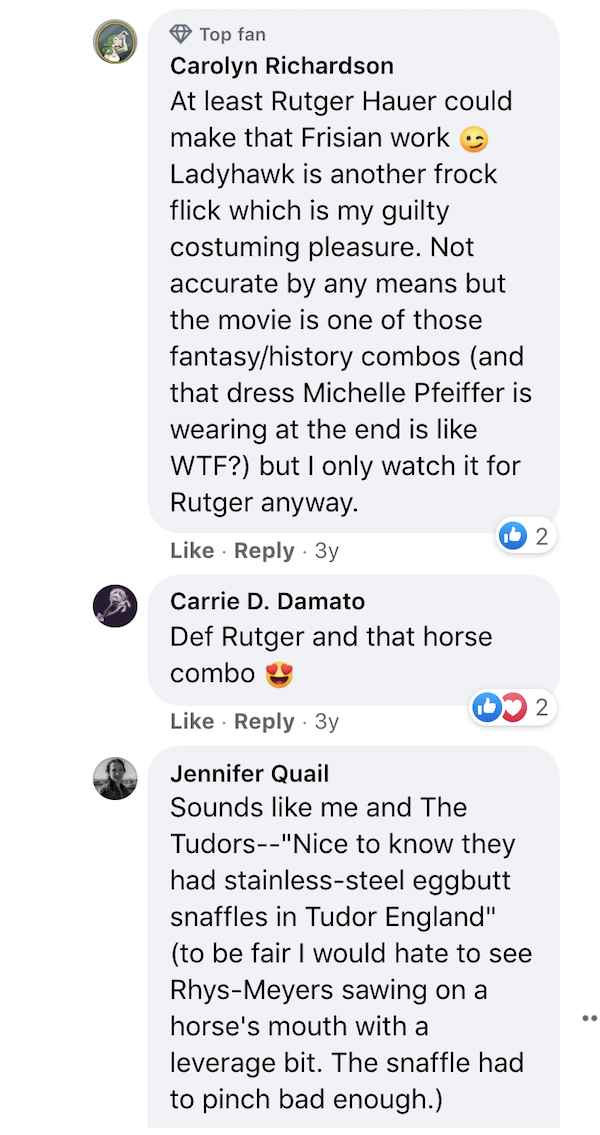 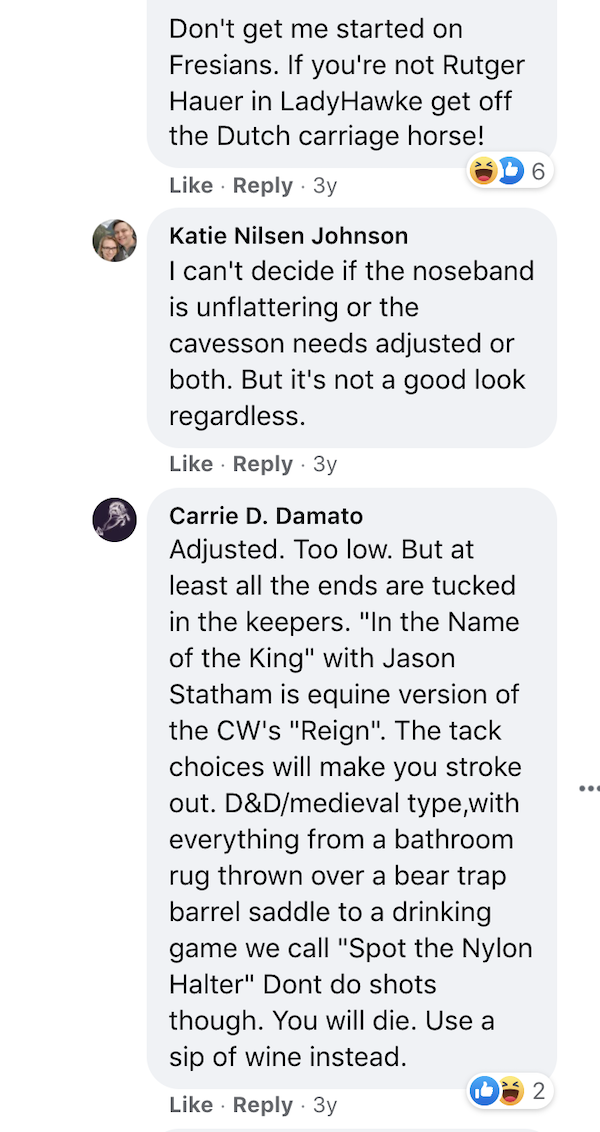 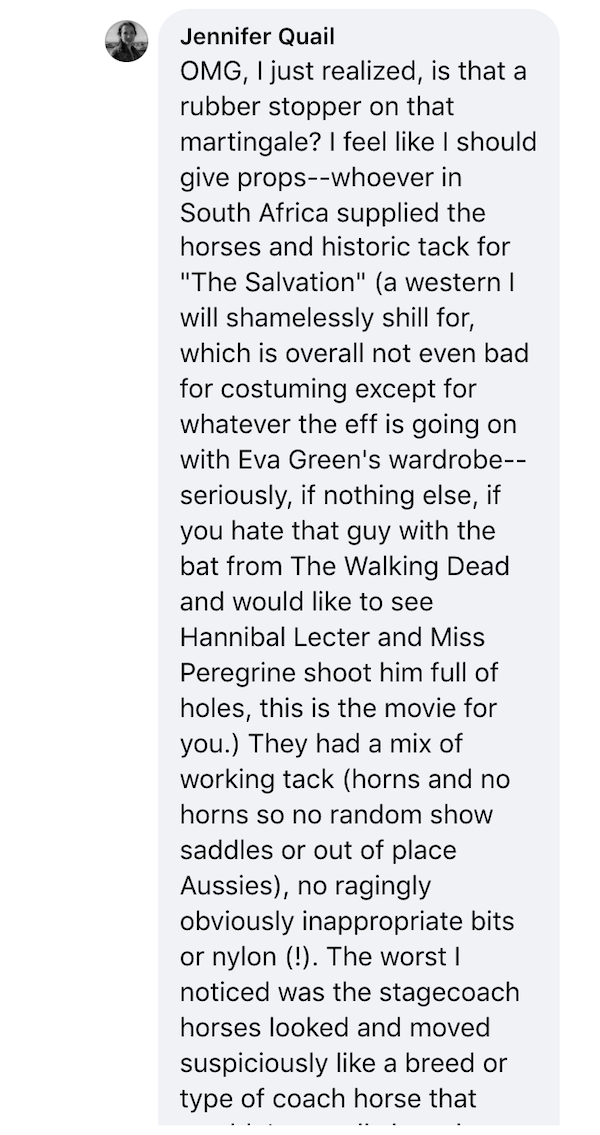 And I recently posted this trailer for Margrete, Queen of the North (2021):

And was thrilled to see this ensue: 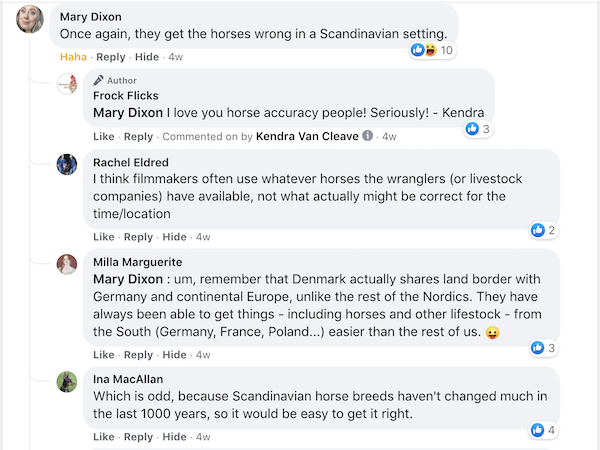 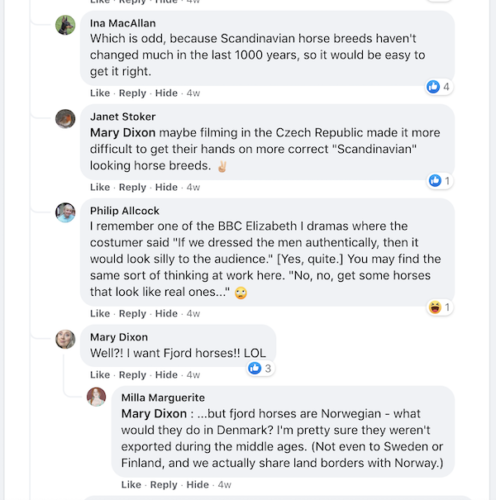 Can you shed some light on any of these films, periods, places, or topics? Get in touch, we’d love to feature your review!