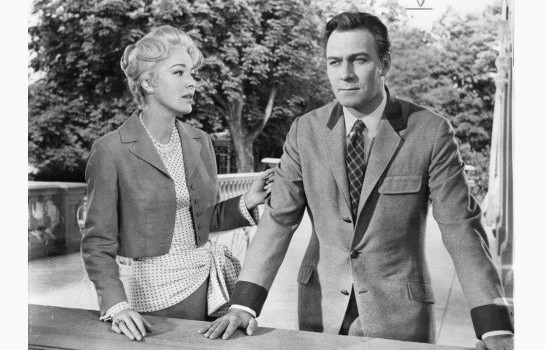 Yesterday, in 1965, The Sound of Music had its U.K. premiere (it premiered a few weeks earlier, on March 2, in the U.S.). In honor of the movie my family used to watch every Christmas, let’s look at the top costumes in The Sound of Music!

This is going to be a highly subjective list, and I welcome your debate in the comments!

Like I said, my family watched this yearly. I remember thinking it was fine and I liked the songs, until suddenly in my mid-teens I realized, “THIS IS THE MOST ROMANTIC MOVIE IN THE WORLD.” I don’t know if I’m a SoM nut, but I do know that I watched the Andrew Lloyd Webber British TV show to cast his new production (How Do You Solve a Problem Like Maria?), and that upon going to London the following year, I went to see the show in the West End (Team Connie, FTW!), and I’ve also seen it on Broadway, and whenever I make it to Austria I WILL be doing the SoM tour. So, yeah. Slightly nutty? I don’t have Captain von Trapp sheets, if that makes you feel any better!

I should mention that the costumes were designed by Dorothy Jeakins, who also designed Samson and Delilah, Niagara, South Pacific, The Unforgiven, The Children’s Hour, The Music Man, True Grit, The Way We Were, Young Frankenstein, and a whole lot more.

I have to include it, because it’s the iconic first scene, cover-of-the-DVD-box dress. There’s nothing exciting about it, but it’s THE Sound of Music dress.

When Maria and the kids accidentally flip their boat, they all come out dripping wet. The Captain is Pissed Off, but you could cut the sexual tension with a knife. Maria is covered in about 30 pounds of wool, but you know the Captain is just picturing her in a wet, white T-Shirt. “I’ll hold your clothes if you’d like to further divest yourself, milady.”

The Captain is seriously hoping for some nip-slip action.

I remember being very confused by this dress when I was young. It seemed far too full and short to be a 1930s dress. And while I still think it has some 1960s overtones to it, I can now see something of what they were going for. It’s pretty, it’s girly, and it’s young. Pssst: Hint to Leisl. Don’t fall in love with a Nazi. It never ends well.

Admit it. While you might want more bling, the costumer in you was/is strangely attracted to nuns’ habits, because it’s like The Lion in Winter!

Think of all the chins we could hide inside of those wimples!

Maria comes back to the von Trapps’ house, the Baroness gets out of the way, and the Captain and Maria get it ON. Okay, they sing about having been good as children, and they finally kiss. At night. Outside. In silhouette. It’s pretty damn cheesy, and it’s pretty damn romantic. This is always the point in the movie when I wish Maria could quickly grow longer hair.

Is the man in your life a jerk who won’t pay child support or won’t kick down for playclothes for the kids? Do like Maria and Scarlett and get creative with the drapery!

Anything with Gretl is good.

Got the man in your life on track with those child support payments? Get shopping at Ye Olde ClothesHaus, home of the lederhosen and the dirndls! You know they make the 14-year-old-at-RenFaire in you happy.

“And after we finish singing, we shall churn the butter!”

It’s The Moment… when the Captain realizes that while he could have a hot, sophisticated, gorgeous, rich woman, he’d rather have the aspiring nun with the bad hair. It’s the most romantic thing EVER. They dance. They gaze into each others’ eyes. You could cut the sexual tension with a KNIFE. If the film were made today, they’d throw themselves onto the buffet table and get to sexytimes — but this is the 1960s, so, no sexytimes. Yet.

“I used my womanly wiles to steal your MAN? Oh I’m so ashamed!”

7. The Captain in White Tie

Captain von Trapp is a patriot. We all know this. He’s all about rocking the forest green lapels and the slightly traditional Austrian suit. But when he breaks out the white tie for the big party, he suddenly becomes Mr. Suave. Of COURSE all the local nuns are going to drop their bloomers! Wouldn’t you? “I can’t put my gloves on, because then you would all faint. Seriously.”

Just about everything the Baroness wears KICKS SERIOUS BUTT. This one is hard to find shots of, but I think it’s a long slinky evening gown with a matching, beaded bolero. Rowr. “I’m giving you up, but I’m wearing this number so you’ll never forget me. Admit it. I have better hair.”

Maria marries the Captain, they go off on their honeymoon, hymens are broken, and suddenly Mummy Is All Growed Up. She can advise Leisel on how to deal with petty man problems, because she’s ALL WOMAN now. Suddenly she goes from ill-fitting sackcloth and sweet but demure dresses, to fitted, sophisticated suits. Hot-cha-cha!

I just want to wear this while lounging poolside in Hawaii with a martini in hand. It’s SO effortlessly chic and sophisticated while being casual. And I don’t even DRINK  martinis! But I would, if I had this outfit. Dude, The Baroness. Can anyone beat her? She is so fucking fabulous. I love this suit, not just because it’s sexxxxxay, but because that blouse coming down around the hips with the big bow says, “Yeah, this is my ass, and it is FINE.” While it reads more 1950s than 1930s to me, this dress is the EPITOME of sophistication. Beautiful fit. High neck and long sleeves. Simple with no trimming. Massive train. Massive veil. I wish I had remembered this dress when I went to make my own wedding gown, it would have been great inspiration.

To quote reader Todd, who said on Facebook, “…the fact it’s supposed to made for her by the Nuns is EVEN BETTER.” SERIOUSLY, AMIRITE? “You’re right, I DO look fabulous!”

That neckline is PERFECT.

I always loved that the nuns had to stay behind the grill. THE MYSTERIES OF THE WEDDING NIGHT REMAIN VERBOTEN. Sorry, kids. Nobody beats the Baroness when it comes to evening glamor. Fight me all you want in the comments, I’ll never budge on this.

She’s a tall, cool, column of ice with a dash of cream for spice. LOVE the gold lame. LOVE the shoulder poufy thing. And while her hair always rocks, it rocks EXTRA HARDCORE when paired with these colors. How the Captain can look at Maria, I have no idea. Alright, let’s do this. Did I miss any costumes you love? Wanna debate my rankings? Let me know in the comments! I can take it!