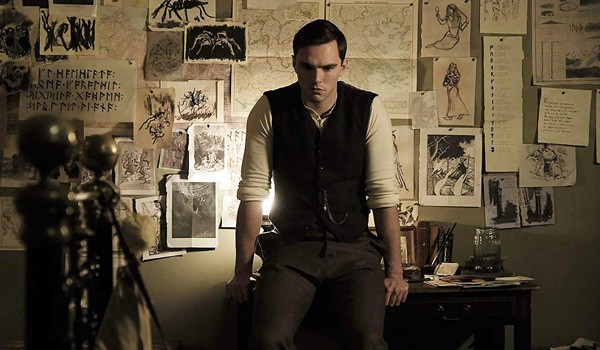 Fantasy author J.R.R. Tolkien often said his famous work The Lord of the Rings was not directly inspired by or analogous to anything that happened in his life. But he also had the names of a romantic couple from his fantasy world engraved on his and his wife’s tombstones, so it’s not like he didn’t feel some kind of connection between the elaborate fictional construction of Middle-earth and his own experiences. Thus, it’s no surprise that the film Tolkien (2019) chooses to see Ronald’s youthful fellowship of artsy boys, nearly-thwarted romance with Edith Bratt, and terrors in the trenches of WWI as fodder for J.R.R. Tolkien’s books. The idea is obvious (and rather disingenuous of Professor Tolkien to deny) and makes for a good flick!

I’ve loved Tolkien’s books my whole life, and I already knew the outlines of his life story. Orphaned, but brilliant with languages, studied at Oxford, soldiered in the Great War, married Edith somewhere in there, back to Oxford as a professor, wrote all those books, chatted with C.S. Lewis, blah blah blah. But this film focuses just on the part up to and including World War I.

Tolkien opens up with Ronald (as J.R.R. was called) in the trenches at the Battle of the Somme, July 1916, giving a harrowing glimpse of this war that scarred a generation of Brits. From there, the full story is told in flashback, starting with Ronald’s childhood with his sickly mother who soon dies, leaving Tolkien and his brother orphans. At Mrs. Faulkner’s boarding house, Ronald shyly meets Edith Bratt, another orphan, who is working as a lady’s companion. Meanwhile, in school, Ronald shows off his skills with ancient languages and forms a brotherhood with three lads who have artistic pretensions. The four boys create the not-so-secret Tea Club and Barrovian Society (TCBS) where they debate worldly thoughts, and the group supports each other through school to university and off to war. 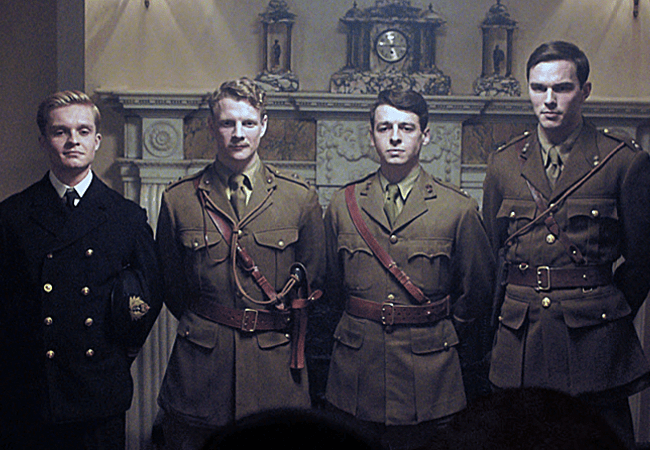 Between the costume and the production design, the film consciously evokes the novels of J.R.R. Tolkien without being gimmicky. As an old-school fan, I appreciated the nuances that were achieved through the use of certain colors, textures, and motifs woven throughout scenes of war or at a bookshop or at the boarding house.

According to the press kit, production designer Grant Montgomery used archival research to recreate Mrs. Faulkner’s boarding house in Birmingham. Since many authentic 1900s houses were gone in that city, they found a suitable building in Liverpool. Montgomery said:

“It was this huge Edwardian house that probably hadn’t been redecorated in 20 years. The place had dark feeling because Mrs. Faulkner liked medievalism and Gothic revival, visual references that also echo where Tolkien went with his writing, with all the dragons, knights, magic, and fantasy.”

I noticed the wallpaper in this house was in the style of William Morris’ Arts and Crafts motifs, so appropriate to the period of the boarding house. But that style also relates well to Tolkien’s Middle-earth writings that are filled with a medieval vibe and glorify the natural and handmade over mechanized and artificial. 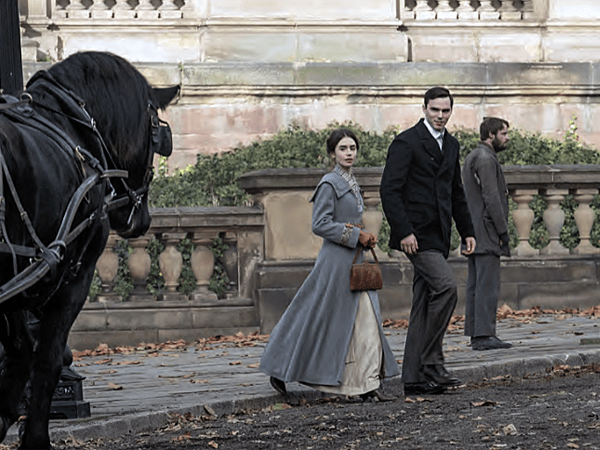 Likewise, Lily Collins’ costumes as Edith had art nouveau touches, and this style was the French interpretation of the Arts and Crafts movement. The sinuous floral and leaf patterns often found in art nouveau are reminiscent of Tolkien’s own drawings for his elven characters and their languages, so it’s relevant that the woman who inspired his elven princess wears elements of this style.

I was able to talk with the film’s costume designer Colleen Kelsall who confirmed that art nouveau was her inspiration from the very beginning. She said:

“When I met Dome [Karukoski, the director] for the first time, I showed him a lot of images of art nouveau, and I explained how I thought it had touched Tolkien’s own personal artwork. And that assured him that there was a fair amount of color around in that era.” 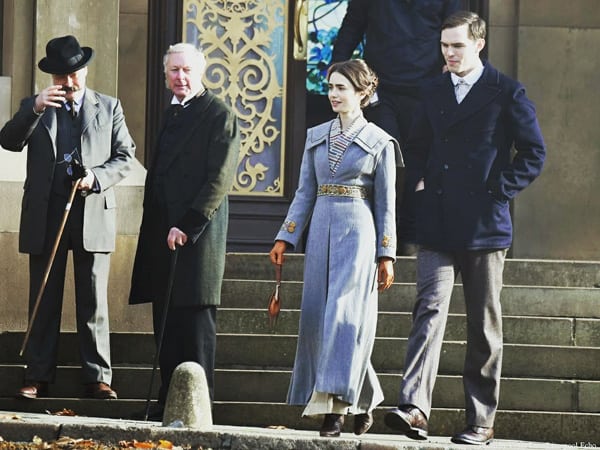 In particular, embroidery was used to create more of a nouveau look in the costumes, which Kelsall explained in our interview:

“I wanted to stay away from lace completely. They [the director and studio] talked about wanting it to feel modern, and lace can take you back. There’s something that makes it feel like a different era.

I felt like there’s a strong link with embroidery and art nouveau. It was such a short period, but such an influential period. It took from the past and linked to the future. It had been around all of Tolkien’s young life as a boy.

And I imagined that young Edith, being stuck as a companion with nothing to do except play the piano and read books for Mrs. Faulker, while doing that, she’d be making her own clothes and embroidering.”

She also included vintage clothing to reinforce this theme:

“Two of the most beautiful pieces that Lily wears are from a private collection in Germany. The pink blouse in the posters, and the blue embroidered blouse at the opera house — they’re both original, and they’re beautiful examples of how colorful that period could be.” 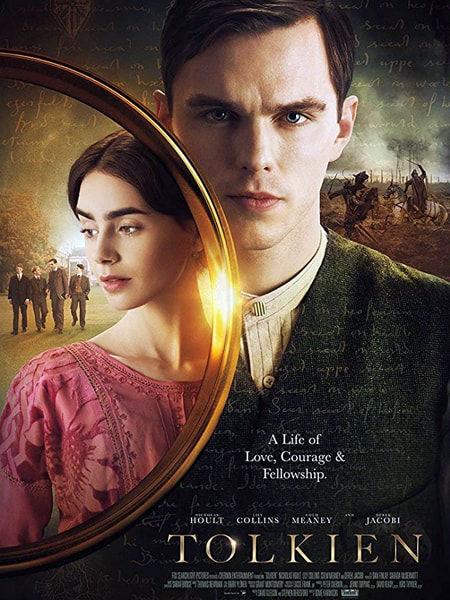 Even Tolkien’s mother has a small gold leaf brooch, connecting her to Tolkien’s love of nature and archaic inner fantasy world. Kelsall noted, “That was an original piece that I picked up in Paris at the flea markets.”

Other vintage items were used for the lads in the TCBS. Kelsall worked with the two sets of actors (who portray the characters at different ages) to bring out these specific portrayals. She said:

“There were a lot of little details that I hope people notice — on the boys clothes, the little collar studs they used are wonderful. We found the most beautiful original ones in Germany, and they have stripes and they have patterns in them and colors. Some of the starched collars on the young boys are original. They have a lavender stripe running through it — we managed to make that work. For me, those little details, I love, and to be able to use them was absolutely beautiful.

Each boy needed to be able to show a little bit of their own character. Whether they fully unbuttoned their collar, took their collar off, undid their top button — all these things made a difference.” 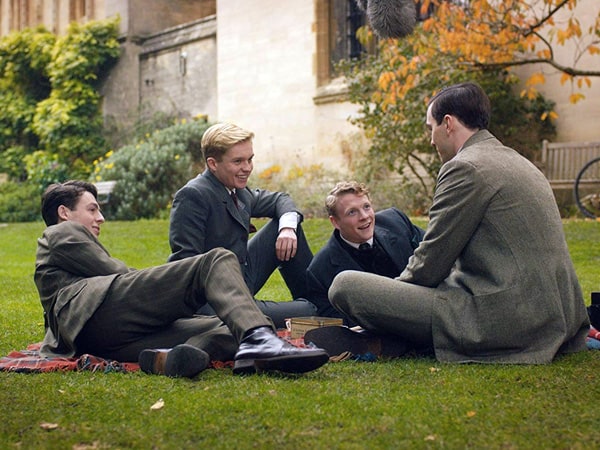 For a film that does have a lot boy stuff — suits and uniforms — which is not our forte at Frock Flicks, these details really do liven up the costumes and bring a richness to the screen.

Kelsall explained that bringing color and life to the period was exactly what the director wanted:

“Dome was absolutely adamant that the film wouldn’t be colorless and dull. He felt that a lot of period dramas depicting that time were very brown, which he didn’t want.

Working on a tight six-week schedule to create all the costumes (including large battle scenes), Kelsall still did historical research. But like many of us, she first turned to the internet, saying:

“There wasn’t a lot of time, so a lot of my research was done on the computer. You can access an amazing amount of images very quickly from great places — the Met Museum, the Kyoto Costume Institute, the Musée Galliera in Paris. And we went to museums in London. The Imperial War Museum was extremely helpful. And we have some costume houses here that are extremely knowledgeable — John [Bright] is amazing at Cosprop, the uniform department is brilliant at Angels. I had the most amazing German historian, Mr. Vogel, he helped me access so many of the tiny details you see in the film, he was fabulous.”

But, being a big studio production, compromises are sometimes made to historical accuracy. Such as hats, Kelsall admits:

The first choice in costume was to make them look as relaxed as possible. So in doing that we took away certain things that I’m sure I’ll get hell about. But it was a joint decision, and sometimes you make those decisions for the love of the story and the characters.”

So yes, we hear that “R” word again, “relatable.” Blame the Powers That Be, don’t blame the costume designer, though! She’s creating a story, and I think it works here. It’s even in the script, in once scene, Edith worries that she won’t fit in because she’s not wearing a hat and in another,  her and Ronald are turned away because of their clothes. To me, it emphasized their genteel poverty and class differences. They were outsiders, not quite getting things right. There are stories of the real Tolkien and Edith at that age throwing sugar cubes at passerbys from a tea room, so they were kind of goofy scamps in their youth. Having them not get the social graces correct in their clothing is one way to express this. 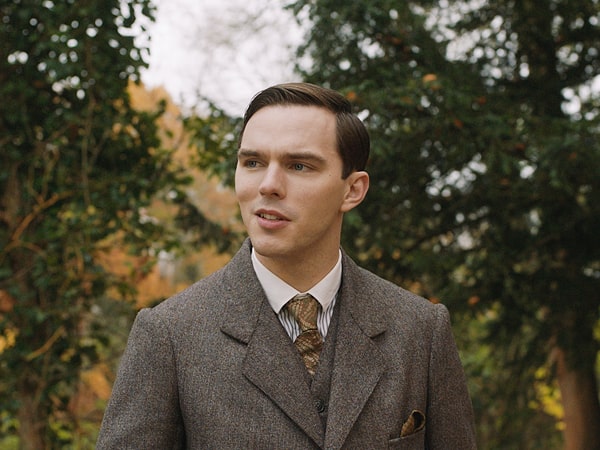 Will you see Tolkien in theaters this weekend?