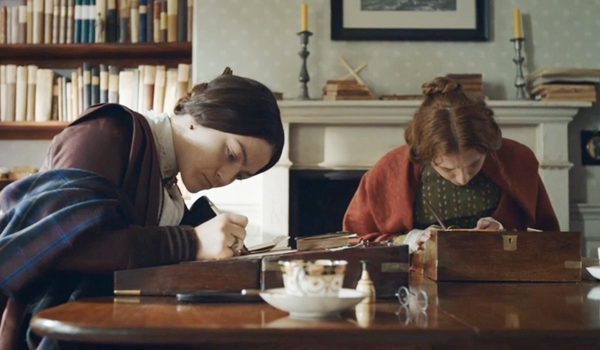 Emily Brontë is often shown doing household chores — reasonably enough, as she was more of a homebody than the other sisters. Her dress sleeves are rolled up so she can kneed bread or wash linens, and she wears an apron. Note that she always has her hair put up while doing housework, because she is a grown-ass woman, this is the 1840s, and they aren’t so poor they can’t afford hairpins, thankyouverymuch. She even leaves her hair up when wandering the moors, proving that high gothic drama does not require flowing tresses (or white nightgowns either! I don’t recall seeing a single one in this film gasp). Emily’s clothes are the simplest of the sisters, although still clearly appropriate for the time and place.