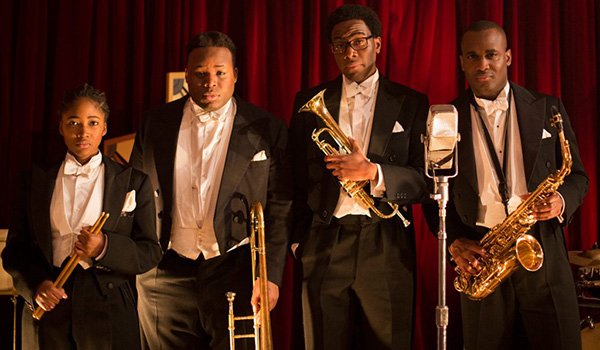 This “new” show premiered on IMDB TV June 11, 2021, but then I discovered that Timewasters actually had two seasons on ITV in 2017 and 2019, but was not renewed again. Plus, this year an American remake has a pilot in the works. Who knows if that will pan out, but in the mean time, the first season is available to stream for free with ads here and the second season will eventually follow. If you’re looking for a fun little historical costume comedy that manages to make pointed political satire, this won’t waste your time. 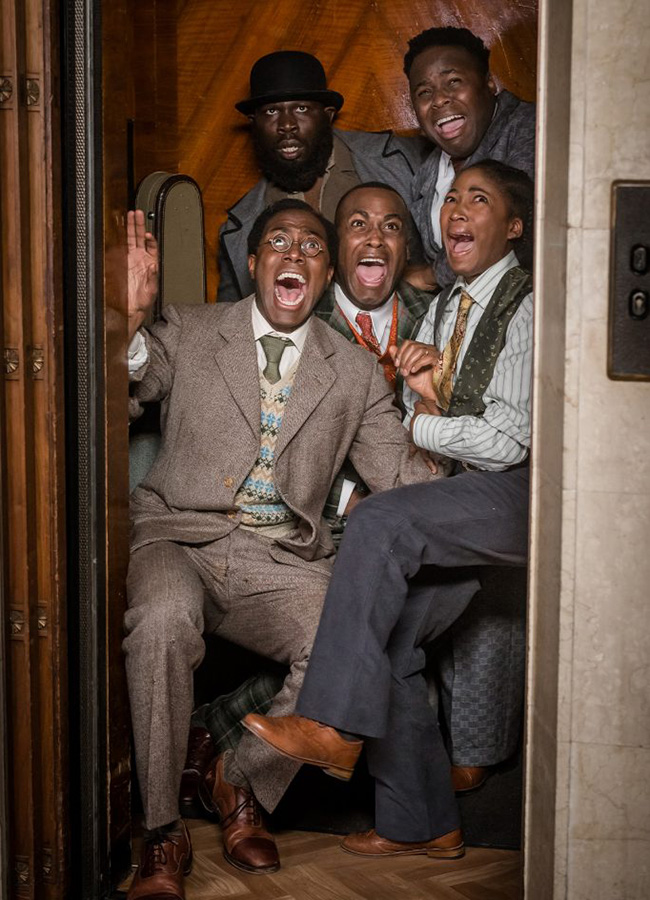 An elevator is their time machine.

The premise is simple: four Black British jazz musicians travel back from the modern day to 1926 and hijinx ensue (the second season has the quartet traveling to the 1950s). Daniel Lawrence Taylor wrote, produced, and stars in the series as Nick, the worried yet weirdly optimistic band leader. Talking in an interview with his drama school Royal Holloway, Taylor described how the series came about:

“There weren’t many roles for black actors so I wanted to create something that not only offered an opportunity for myself, but a lot of other black performers. I was learning to play the trumpet at the time and thought it would be a cool idea to write a show about a jazz band and the racial troubles they’d get into in a very white 1920s Britain. The time travel aspect was the icing on the cake. I then wrote a script, and myself and my agent sent it round to production companies. A few really liked it, but I settled on developing it with Big Talk as they had an amazing track record. We then pitched it to ITV2 who loved it and decided to make a series. Evidently, I was so busy with writing the show, I had to stop with my trumpet lessons.”

Music is woven through the show as a plot point — the band plays brassy versions of OutKast and Amy Winehouse songs when their new ’20s friends want “jazz,” and Nick’s sister Lauren (Adelayo Adedayo), the band’s drummer, becomes a feminist musical sensation in one episode. Although her talent is co-opted by a white woman, of course (and played by Downton Abbey‘s Daisy, Sophie McShera). Oh yeah, the show takes on sexism along with racism and classism, but it’s not a polemic. As Taylor told The Guardian:

“It is foremost a comedy and you need to be laughing – anything else is a bonus. We changed storylines that were too close to the bone. The minute you start preaching to people, they turn off.” 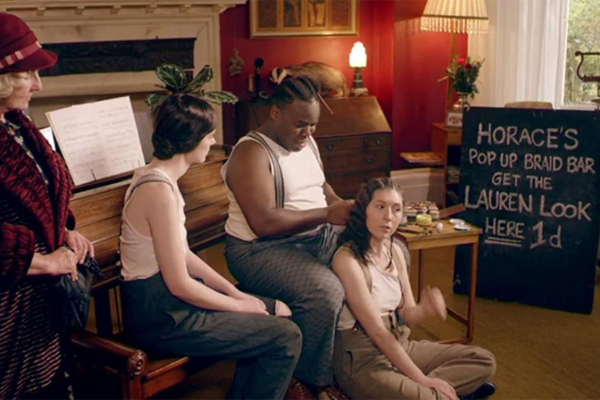 The band tries to make money off the white chicks who are suddenly interested in their music & style.

And the jokes aren’t what you’d expect either, because Taylor has done his historical homework:

“In the 1920s there was racism, but also negrophilia [a craze for black culture, when to collect African art, to listen to black music, and to dance with black people was a sign of being modern and fashionable]. In ‘Timewasters’ there are people chucking things at the quartet in the street, while others want a black jazz band in their house or a black lover — it’s ripe for comedy.”

In a ComiCon interview, Taylor elaborated:

“The average Joe would be a little more skeptical and hesitant about what they would get up to in the past, but the four band members are essentially musically talented idiots, so it allowed me to chuck them into weird and wonderful places and know they’d try and make the best out of a bad or tricky situation. It was especially fun to write season two when a few of their reckless actions in the 1920s have funny consequences later down the line in the 1950s.”

The first season is good, ridiculous fun, so I’m just waiting to see how that plays out in the second. Also, the series looks good, which for a comedy is always surprising. The four musicians have sharp period wardrobes, while the ’20s people they meet look appropriate to their characters. Victoria (Liz Kingsman) is the main person who takes them in, and she’s a rich, utterly vapid young lady who often wears cliche beaded flapper dresses and headbands, but it works because she’s such a silly character. She does get some sportswear for the few times she’s not being a dim-witted jazz baby. 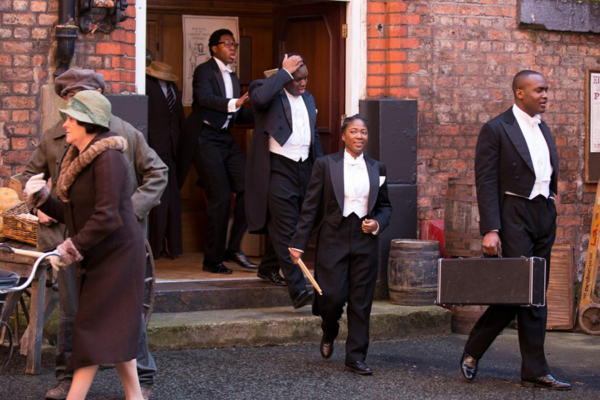 They all wear tuxes to perform, & I love that, from the very start, Lauren wears men’s clothes since that’s closest to the 2017 clothes she prefers (she only wears a ’20s dress on a specific occasion). 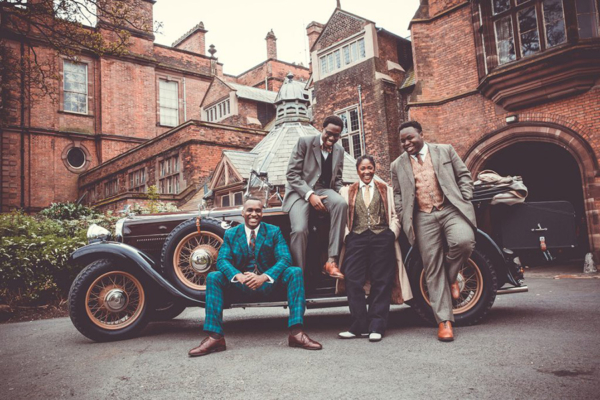 Saxophonist Jason (Kadiff Kirwan) tends to wear the brightest, flashiest outfits, but each character has their own historical style. 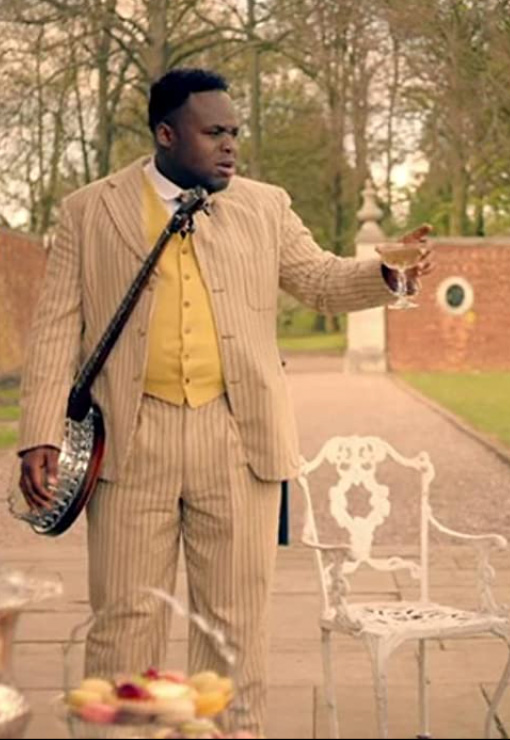 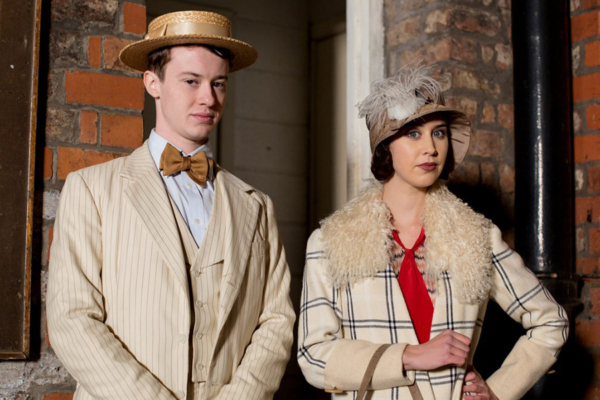 Have you seen Timewasters yet, either in the U.K. or U.S.?